Accessibility links
UNESCO Deems Belgium's Beer Culture A Treasure Of Humanity : The Two-Way The agency noted Belgium's beer experts — zythologists — who taste and study complex and often experimental brews. It's one of 16 cultural elements that are being recognized. 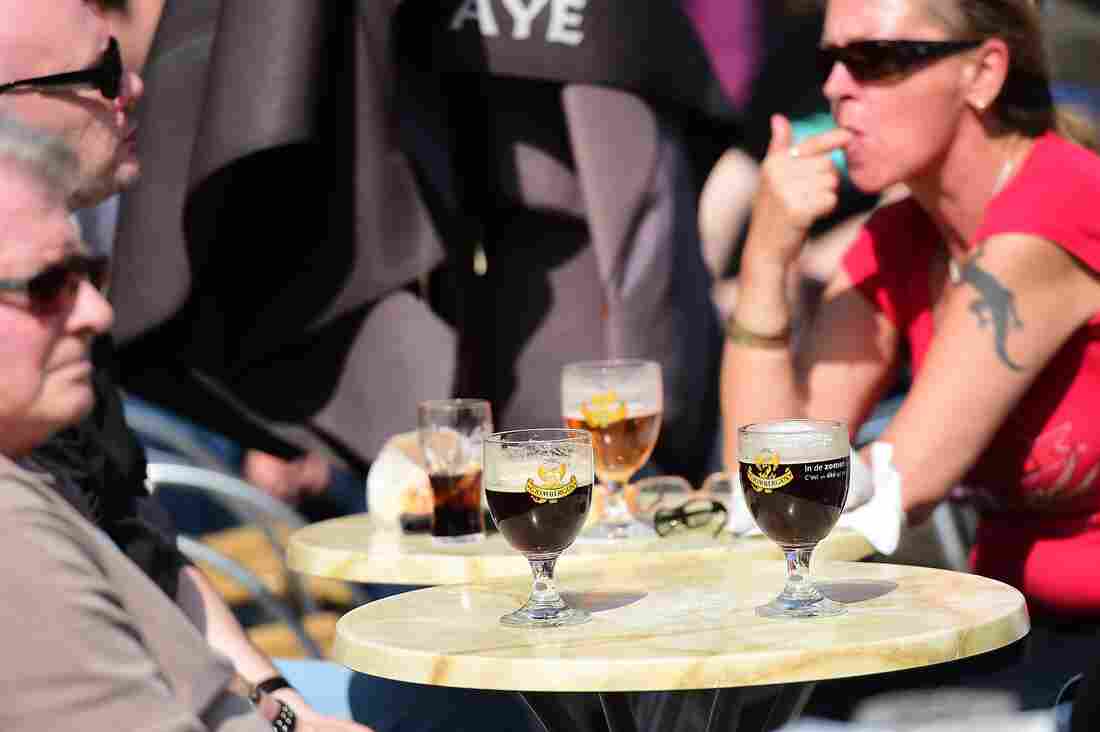 UNESCO cited Belgians' affinity for a wide range of beer in its official recognition of the beer culture of Belgium as a treasure of human culture that should be protected. Emmanuel Dunand/AFP/Getty Images hide caption 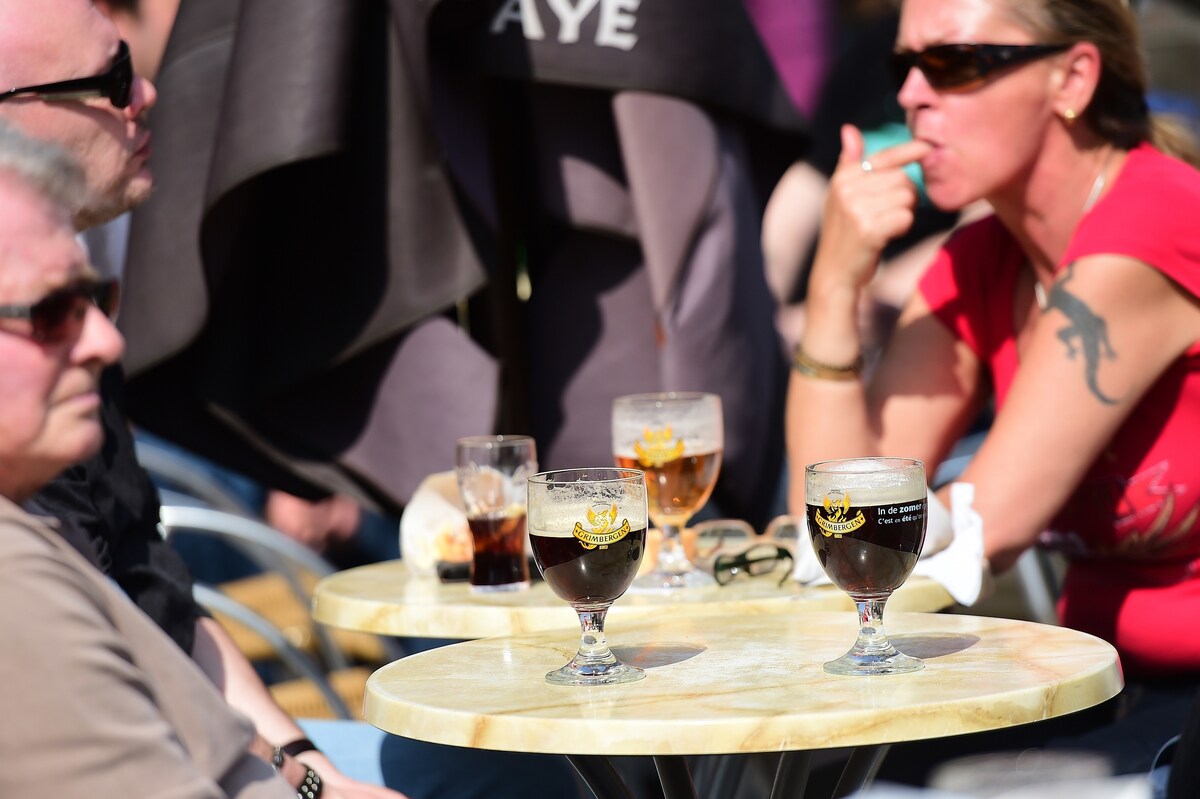 UNESCO cited Belgians' affinity for a wide range of beer in its official recognition of the beer culture of Belgium as a treasure of human culture that should be protected.

Citing Belgian beer's integral role in social and culinary life, UNESCO is putting the country's rich brewing scene (with nearly 1,500 styles) on its list representing the Intangible Cultural Heritage of Humanity. Belgium's beer culture is one of 16 new additions that were announced Thursday.

Other honorees include the making of flatbread in Iran, Turkey, and elsewhere; Cuba's rumba music, Egypt's Tahteeb stick game, and long-observed festivals in Japan, France, Spain and Greece.

When Belgium's beer culture was nominated for UNESCO recognition and protection back in 2014, beer expert Erik Verdonck explained the reasoning to NPR's Rachel Martin:

"Well, I think, thanks to the fact that we still have 150 breweries and many of these are still family owned. So it's not only a lot of more industrial type of beer tradition; we also keep to our typical traditions like sour beers, for instance, lambic beers close to Brussels and of course, the famous Trappist and abbey beers. This is all part of our liquid heritage, if you want."

In its note recognizing Belgium's beer scene, UNESCO — the United Nations Educational, Scientific and Cultural Organization — wrote that while the country drinks a wide variety of beer, it's also famous for cooking with it — making everything from flavorful sauces to beer-washed cheese.

The agency also noted the beer experts — zythologists — who study and discuss the country's complex and often experimental brews. And it acknowledged efforts to make brewing more sustainable, including agreements between some breweries and neighboring farms that no pesticides or chemicals will be used that could pollute the groundwater.

A Beer, A Plan, A Pipeline: Belgian Brewer Will Funnel Beer 2 Miles Away

And Korea's famous female divers of Jeju Island, who for years have retrieved shellfish for a living, were also honored.

Here's a list of the other cultural expressions honored by UNESCO Thursday, quoting the official notice:

"Mangal Shobhajatra is a festival for the public that celebrates Pahela Baishakh (New Year's Day) on April 14, organized by students and teachers of Dhaka University's Faculty of Fine Art. The tradition began in 1989 when students, frustrated by living under military rule, wanted to bring the community hope for a better future. It features floats and masks symbolizing strength, peace and a driving away of evil to allow for progress. With knowledge of the element shared by the school, it promotes public solidarity and democracy.

"Making and appreciating beer is part of the living heritage of a range of communities throughout Belgium. It plays a role in daily life, as well as festive occasions. Almost 1,500 types of beer are produced in the country including by some Trappist communities. Craft beer has become particularly popular. Beer is also used by communities for cooking, producing products like beer-washed cheese, and paired with food. Knowledge of the element is shared in the home, social circles, breweries, universities and public training centres.

"China— The Twenty-Four Solar Terms, knowledge of time and practices developed in China through observation of the sun's annual motion

"The ancient Chinese divided the sun's annual circular motion into 24 segments, calling each segment a specific 'Solar Term'. The criteria for its formulation were developed through the observation of changes of seasons, astronomy and other natural phenomena. The element remains of particular importance to farmers for guiding their practices. Some rituals and festivities are associated with the terms, which have contributed to the community's cultural identity. Knowledge of the element is transmitted through formal and informal means of education.

"Cuba— Rumba in Cuba, a festive combination of music and dances and all the practices associated

"Rumba in Cuba is associated with African culture but also features elements of Antillean culture and Spanish flamenco. A symbol of marginal Cuban society, the practice developed in poor neighborhoods of cities, shanty towns and rural areas spreading from west to east of the country. Rumba in Cuba, with its chants, movements, gestures and music acts as an expression of resistance and self-esteem while evoking grace, sensuality and joy to connect people. Knowledge of the element occurs via imitation within families and neighborhoods.

"The Fallas festivity is a traditional practice of communities in Valencia to mark the coming of spring. It features a monument of caricatures by local artists that provides a commentary on current social issues. Erected in the town square from 14 to 19 March, it is then set alight, symbolizing a rejuvenation of social activity. Marching bands, outdoor meals and fireworks are part of the festivity, which enhances social cohesion and provides an opportunity for collective creativity; the element is passed on within families.

The merengue is considered part of the Dominican community's national identity playing an active role in various aspects of the people's daily lives – from education and social gatherings and celebrations to political campaigning. In 2005, November 26 was declared National Merengue Day with merengue festivals held each year. Danced in pairs, flirtatious gestures are used as dancers move to music. Passed on through participation, the traditional practice attracts people of different social classes helping to promote respect and coexistence within communities.

"In ancient Egypt, tahteeb was a form of martial arts. Now a festive game, some of the old symbolism and values associated with the practice remain. Performed before an audience, it involves a brief, non-violent interchange between two adversaries wielding long sticks while folk music plays. Practitioners are male, mostly from Saeedy populations in upper Egypt. Rules of the game are based on mutual respect, friendship, courage, chivalry and pride. It is passed on within families and neighborhoods in the communities.

"Gada is a traditional system of governance of the Oromo people in Ethiopia, developed from knowledge gained over generations. It regulates political, economic, social and religious activity serving as a mechanism for enforcing moral conduct, building community cohesion, and expressing culture. Gada is organized into five classes taught by oral historians, with each having to progress through a series of grades before it can take the leadership. Men, whose fathers are members, participate. The element is passed on within families and at school.

"On Jeju Island, a community of women, some in their 80s, goes diving to gather shellfish for a living. The Jeju haenyeo (female divers) harvest up to seven hours a day, 90 days of the year holding their breath for every 10m dive. Beforehand, prayers are said for safety and an abundant catch. The element is passed on in families, fishery cooperatives and The Haenyeo School. The traditional practice advances women's status in the community, represents the island's identity and promotes sustainability.

"Making and sharing flatbread (lavash, katyrma, jupka or yufka) in communities of Azerbaijan, Iran, Kazakhstan, Kyrgyzstan and Turkey is a widely-practised tradition. It usually involves family members but in rural areas, neighbours may participate together. Baked in an oven, metal plate or cauldron the bread is shared at regular meals, weddings, births, funerals and various holidays, particularly for prosperity. Passed on by participation and from master to apprentice, the practice expresses hospitality, solidarity and symbolizes common cultural roots reinforcing community belonging.

"The Carnival of Granville is a four-day celebration that takes place in the lead up to Shrove Tuesday. Involving the local community and nearby communes, festivities include a series of float processions that often take a humorous look at current events, politics and celebrities involving the work of 2,500 'carnivalists'; marching bands; balls for different age groups; a confetti battle and 'night of intrigues' for carnival-goers to dress in costume. Contributing to community unity, transmission occurs within families and committees.

"Georgia's written language has produced three alphabets – Mrgvlovani, Nuskhuri and Mkhedruli – which remain in use today. Mrgvlovani was the first alphabet from which Nuskhuri was derived and then Mkhedruli. The alphabets coexist thanks to their different functions, reflecting an aspect of Georgia's diverse cultural identity. Its educational system is based on the Mkhedruli alphabet taught in primary and high school and in the home, while Mrgvlovani and Nuskhuri are practised and taught predominately by its Apostolic Autocephalous Orthodox Church community.

"Germany— Idea and practice of organizing shared interests in cooperatives

"A cooperative is an association of volunteers that provides services to community members to improve living standards, overcome shared challenges and promote positive change. Based on the subsidiarity principle that puts personal responsibility above state action, cooperatives allow for community building through shared interests and values. Today, a quarter of Germany's population participate in the practice passed on within cooperatives, universities, via the German Cooperative and Raiffeisen Confederation, The Akademie Deutscher Genossenschaften, the German Hermann-Schulze-Delitzsch Society and the German Friedrich-Wilhelm-Raiffeisen Society.

"From December 25 to January 5, dancers, actors and musicians in Kozani, Greece, perform in village streets and visit homes to wish each other prosperity for the new year. The Momoeria dancers represent the priests of Momos (god of laughter and satire) or commanders of Alexander the Great trying to convince nature not to endanger the livelihood of villagers, while actors perform a play with musicians. Passed on by older generations, it is part of community identity and builds social integration.

In cities and towns throughout Japan, float festivals are held annually to pray to the gods for peace and protection from natural disasters. The Yama, Hoko and Yatai float festivals, considered the biggest events of the year, involve the collaborative efforts of various sections of the community and, as a traditional practice, reflect the diversity of local culture. Responsibilities are shared by everyone, from float construction to music and coordination with senior bearers teaching the young; workshops are also held."