Accessibility links
As Trump And Clinton Campaign Staffers Face Off At Harvard, Bitterness Overwhelms : The Two-Way A quadrennial post-election Harvard tradition brings together senior campaign staffers from both sides to discuss the election. This year's forum was at times consumed by raw feelings.

Listen · 0:21 0:21
Bitterness Overwhelms As Trump And Clinton Campaign Staffers Face Off At Harvard 0:21 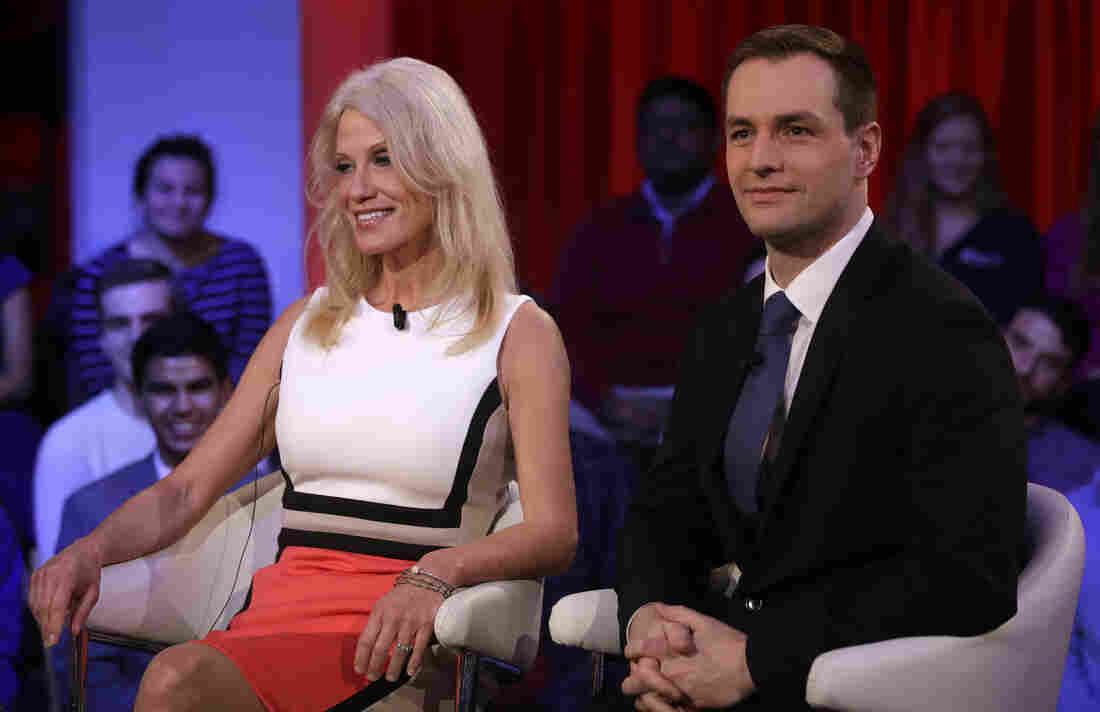 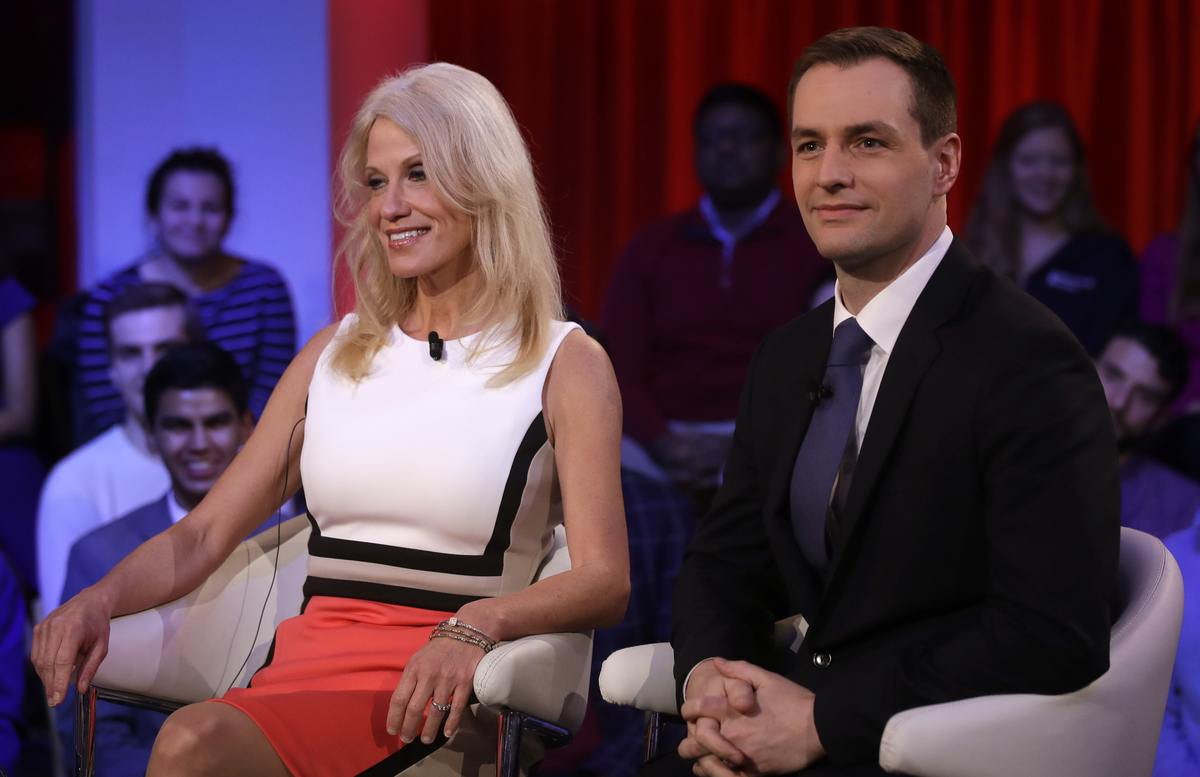 There were moments when watching the Trump and Clinton campaigns discuss the election at the Campaign Managers Conference at the Harvard Institute of Politics was like watching The Jerry Springer Show without the chair-throwing (or paternity disputes).

The 2016 campaign was an ugly, knock-down, drag-out fight between two different visions of America. So it was fitting that the typically polite and clinical quadrennial gathering of campaign professionals would erupt into shouting matches and accusations raw with emotion.

As Harvard's Nicco Mele regularly reminded the political operatives, journalists and students in the audience, the event was intended to take down "a first draft of history, and we are trying to capture what happened here for generations to come."

For the final panel of the day, senior operatives from the Trump and Clinton campaigns sat across from each other around a big rectangular formation of tables. There were moments when it seemed like a very good thing that 10 feet separated them.

Earlier in the day, there was a sense of good humor and mutual respect between the various campaigns (more than a dozen were represented). But with the Trump and Clinton teams face to face, and with the weight of history being written, it turned ugly fast.

Here are some key moments:

Throughout the conference there was a lot of discussion of Donald Trump's controversies and flare-ups. Trump's team said they initially thought it was a problem for the campaign. Corey Lewandowski, who was Trump's first campaign manager, reflected on the weekend in July 2015 when Trump said John McCain wasn't a war hero because he had been captured.

Lewandowski said he had counseled Trump to apologize. Instead, Trump embraced his remarks, holding a press conference where he never apologized and further criticized McCain.

Lewandowski also said he spoke to Trump before a San Diego event where Trump criticized Indiana-born U.S. District Judge Gonzalo Curiel. Lewandowski said he told Trump not to go there. Trump, of course, did go there, setting off one of the more lengthy and damaging feuds of his campaign.

But despite so many such flare-ups, there was no knockout blow to the Trump campaign. Not the McCain feud, the Megyn Kelly fight, the criticism of Judge Curiel (House Speaker Paul Ryan called Trump's remarks "the textbook definition of racist comments"), the feud with the Khan family or even the Access Hollywood video where Trump talked about groping and kissing women.

Kellyanne Conway, the campaign manager who finished out the election with Trump, had this takeaway:

"There's a difference to voters between what offends you and what affects you. And they were being told constantly, 'Stare at this, care about this, make this the deal-breaker once and for all.' And they were told that five or six times a week about different things. And yet they went, they voted the way voters have always voted: on things that affect them, not just things that offend them."

It is safe to say there was no agreement why Trump won and Hillary Clinton lost.

At times both campaigns blamed the media.

The Clinton team also blamed FBI Director James Comey's two letters in the final days of the campaign about the investigation into Clinton's email server, as well as Russian-linked hacking of the Democratic National Committee and campaign chairman John Podesta's personal Gmail account.

The Trump team never acknowledged, even when pressed by moderators, that Russia was involved, despite intelligence agencies making it very clear there had been Russian involvement.

Trump's team touted its digital efforts and the Republican National Committee's underrated ground game. They also credited Trump's intensive travel schedule, visiting states he was thought to have no chance in but that he ultimately won.

But more than anything, they said it was Trump's instincts and ability to talk directly to the American people — in a way that was relatable, even while embracing his own wealth — that carried him to victory. Even if those instincts sometimes contradicted what their political experience told them should be the right move.

Emotions are still quite raw, especially on the Clinton side. And for Trump's team members there was a certain chip on their shoulder that came from a sense of never being taken seriously and yet coming out ahead. That was summed up in a back-and-forth over whether Americans in fact chose Trump.

"Listen, you guys won," said Clinton pollster Joel Benenson. "That's clear. You won the Electoral College. Let's also be honest. Don't act as if you have some popular mandate for your message. ... The fact of the matter is, is that more Americans voted for Hillary Clinton than Donald Trump."

Conway had a simple retort.

"Hey guys, we won," Conway said. "I mean, seriously, hold on. Why is there no mandate? You've lost 60 congressional seats since President Obama got there."

At one point, discussion turned to the hiring in August of Steve Bannon as CEO of Trump's campaign. Bannon took leave from his job as head of Breitbart, a website Bannon once described as "the platform of the alt-right." The term alt-right — referring to the Web-centric white-nationalist movement — got a lot of attention in the campaign, especially after Bannon's hiring and after Clinton delivered a speech on the topic in Reno, Nev.

"I am more proud of Hillary Clinton's alt-right speech than any other moment on the campaign, because she had the courage to stand up," said Clinton campaign communications director Jennifer Palmieri.

At this point the discussion had grown extremely heated. Then Palmieri delivered the line that stands out the most from the entire 2 1/2-hour discussion.

"I would rather lose than win the way you guys did," Palmieri said, her voice shaking.

"How exactly did we win, Jen, I'd like to know?" Conway asked, though the question was clearly rhetorical, as she continued.

"We did it by looking at the schedule and looking at, yes, the electoral map of 270, because that's how you win the presidency. And we went places and we were either ignored or mocked roundly by most of the people in this room. But I have a smile on my face at all times."

Palmieri had been talking about the appeals to fear and division, the Muslim ban and — as one Clinton campaign operative put it — racially tinged "dog whistles" used by Trump and his campaign.

"As his presidency goes forward, I am going to be very glad to have been part of the campaign that tried to stop it," said Palmieri.

"Do you think I ran a campaign where white supremacists had a platform? Are you going to look me in the face and tell me that?" Conway asked.

"It did, Kellyanne, it did," said Palmieri.

"And that's how you lost?" said Conway.

At this point an unidentified man's voice is heard saying, "You guys are pathetic."

Conway continued: "Do you think you guys could have just had a decent message for the white working-class voters? Do you think this woman [Clinton] who has nothing in common with anybody ... "

It devolved into cross-talk before Conway regained control of the floor to make her point.

She asked, again rhetorically, whether hundreds of counties flipped from supporting President Obama in 2012 to Trump in 2016 because, as the Clinton team asserted, of messaging that appealed to white nationalists, or because "people aren't ready for a woman president? Really?

"How about it's Hillary Clinton — she doesn't connect with people?" said Conway. "How about they have nothing in common with her? How about you had no economic message?"

"You guys are punching down. It's unbelievable," said another man, though it's not clear who.