Accessibility links
Unemployment Rate Drops To 4.6 Percent, Lowest Level Since 2007 : The Two-Way The U.S. added 178,000 new jobs in November, according to the Bureau of Labor Statistics, which was about what was expected. However, wages dropped slightly, after an 11-cent gain in October. 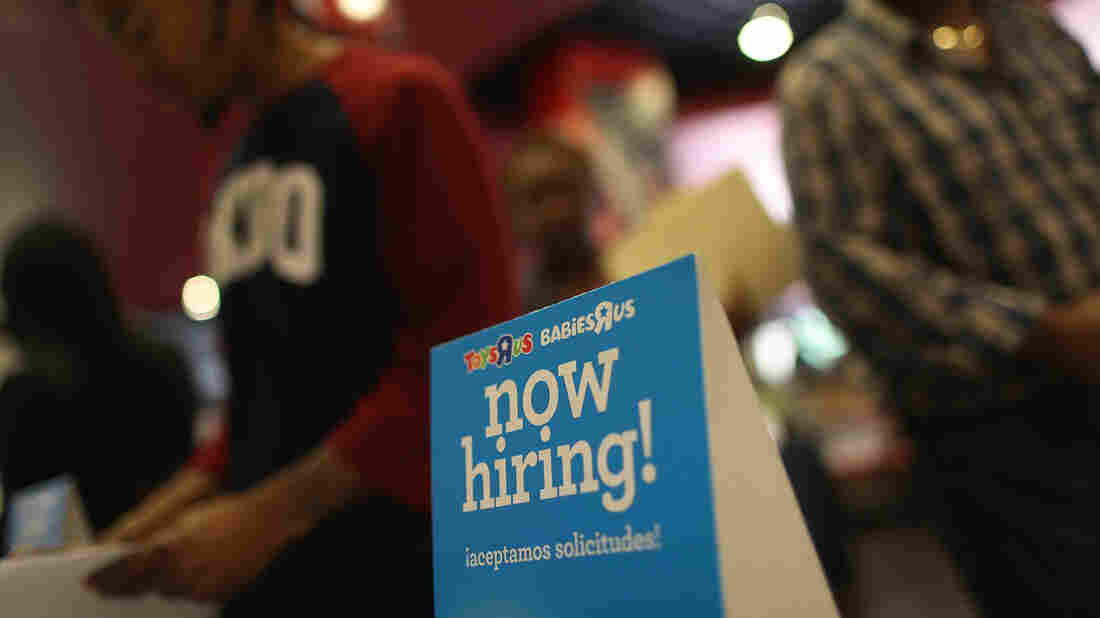 A "now hiring" sign is seen at the Toys R Us booth during the JobNewsUSA job fair at the BB&T Center in Sunrise, Fla., on Nov. 15. Joe Raedle/Getty Images hide caption 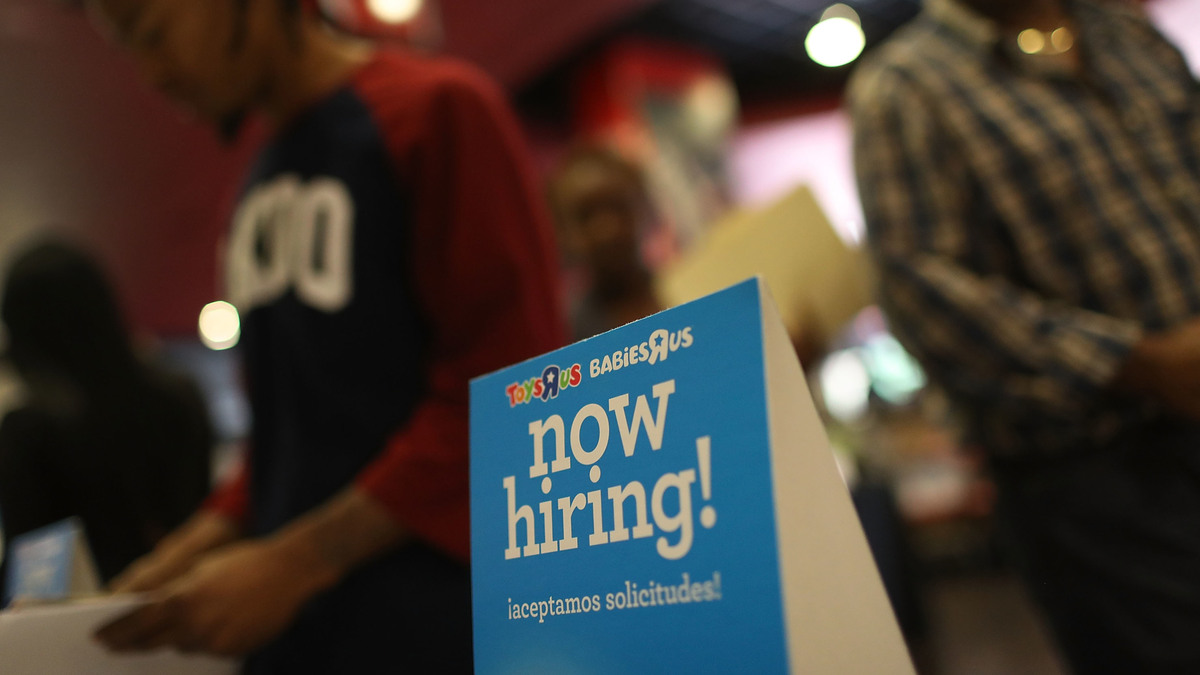 A "now hiring" sign is seen at the Toys R Us booth during the JobNewsUSA job fair at the BB&T Center in Sunrise, Fla., on Nov. 15.

Unemployment dropped by 0.3 percentage points, to 4.6 percent, last month — the lowest rate since 2007 — according to the monthly jobs report from the Bureau of Labor Statistics.

As NPR's Marilyn Geewax notes, 4.6 percent unemployment is what most economists consider "full employment," which she says is "when the number of people seeking jobs is roughly in balance with the number of openings. It doesn't mean the unemployment rate is zero because that's not realistic." (It's worth noting that employment varies by region and demographic, so the fruits of full employment aren't shared by all.)

The report wasn't all good news: Wages dropped slightly in November, instead of showing a hoped-for increase, although they are still 2.5 percent higher than this time last year.

The jobs report says the U.S. added 178,000 new jobs in November, which is about what economists had expected.

But the drop in unemployment was a surprise — economists had thought it would hold steady at 4.9 percent.

The BLS notes that the unemployment rate had shown little movement from August 2015 through October 2016.

The drop in unemployment was driven by adult men, while the rates for women and teenagers didn't show much or any change. 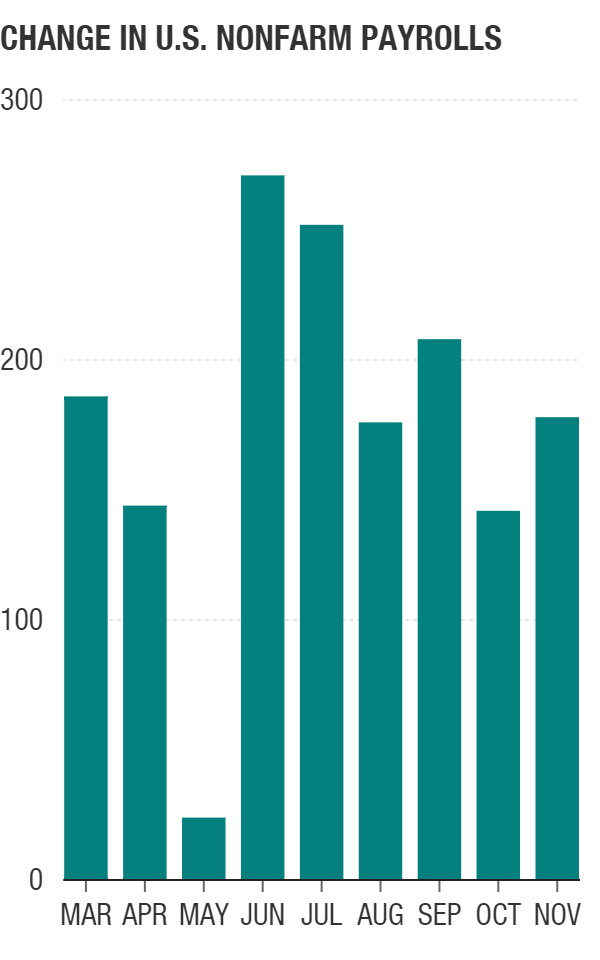 Solid job growth helped push the unemployment rate down to 4.6 percent. But another proximate cause of the big drop in the rate was a decline in the labor force, NPR's John Ydstie reports, which means fewer people were counted as unemployed. The labor force shrank by 226,000 workers in November.

"Certainly there were lots of retiring baby boomers among them; also, there could be people discouraged because they couldn't find a job, and it could be just be bumpiness in the survey," John says.

The labor force participation rate, the number of people with part-time jobs who would prefer full-time jobs, and the number of discouraged workers all showed little change.

Average hourly earnings dropped by three cents, after seeing an 11-cent rise in October. Economists had been watching to see if the relatively low unemployment rate would be pushing employers to raise wages, NPR's Yuki Noguchi reports.

"In previous years, wage gains have been stagnant," Yuki told our Newscast unit. "But in October, wages increased at their fastest pace since the end of the recession — 2.8 percent."

That trend did not continue in November. The BLS notes that over the course of the year, counting the small drop in November, wages have increased by 2.5 percent.

Professional and business services, health care and construction all added new jobs, while other major industries neither added nor lost jobs.

The report also revised the jobs numbers for the past two months — the numbers for September went up to 208,000, and for October went down to 142,000. In total the revisions meant there were 2,000 fewer jobs added this fall than had previously been reported.

The November jobs report was being closely watched for anything that might affect future interest rates.

One key factor in interest rate decisions is the unemployment rate — and how close the country is to "full employment."

"More liberal economists say, 'We're not all the way there yet, so let's hold off on interest rate hikes,' " NPR's Chris Arnold explains. "More hawkish ones say we need to be raising now to stave off inflation because we're so close to full employment."

"The Fed is expected to inch rates higher again as early as its next meeting, later this month," he reports.