Accessibility links
Gatlinburg Wildfires: Emergency Evacuation Notice Arrived After The Flames For Some : The Two-Way As the death toll continued to rise from a wildfire that destroyed parts of Gatlinburg, Tenn., officials began to assess the response to a blaze that grew out of control in a matter of minutes.

Emergency Evacuation Notice Arrived After The Flames For Some In Tennessee

Emergency Evacuation Notice Arrived After The Flames For Some In Tennessee 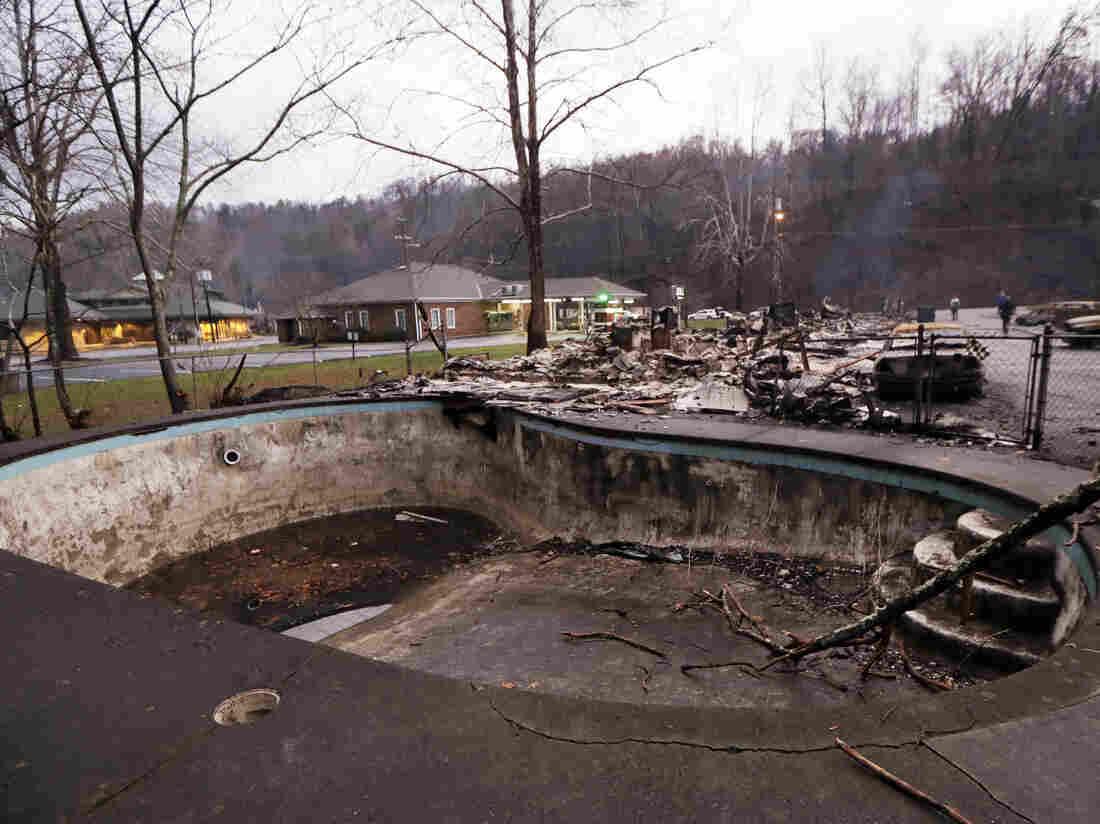 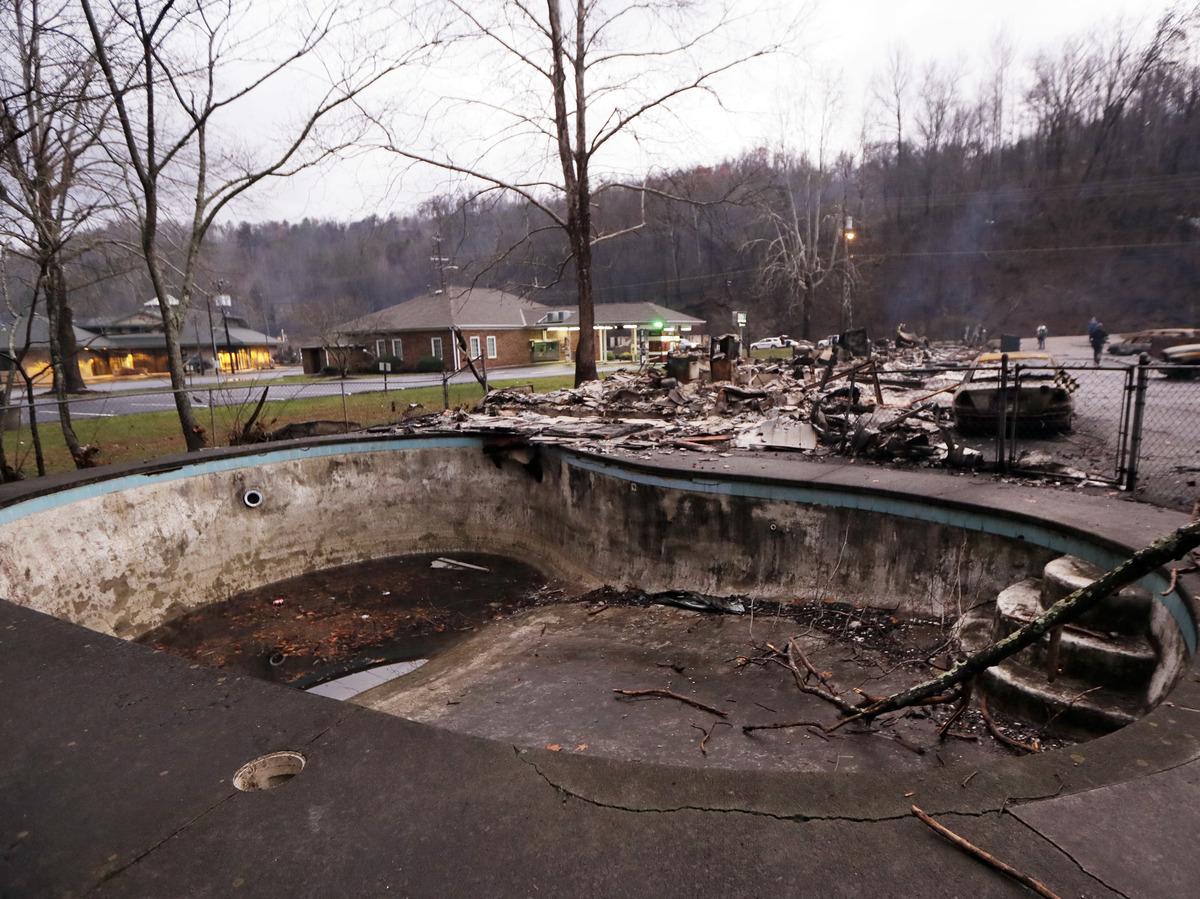 A swimming pool in a motel complex in Gatlinburg, Tenn.

In eastern Tennessee, officials say a wildfire that tore through resort towns in the foothills of the Great Smoky Mountains earlier this week killed at least 13 people and destroyed nearly 1,000 structures, according to local officials and the state emergency management agency.

The confirmed death toll in and around the tourist town of Gatlinburg in Sevier County has climbed steadily since the fire raced into town overnight on Monday.

On Friday, search and rescue crews from state law enforcement agencies and the national guard were still looking for people who had not made it out of town before they were trapped by flames.

The state bureau of investigation has set up a hotline to report missing people. 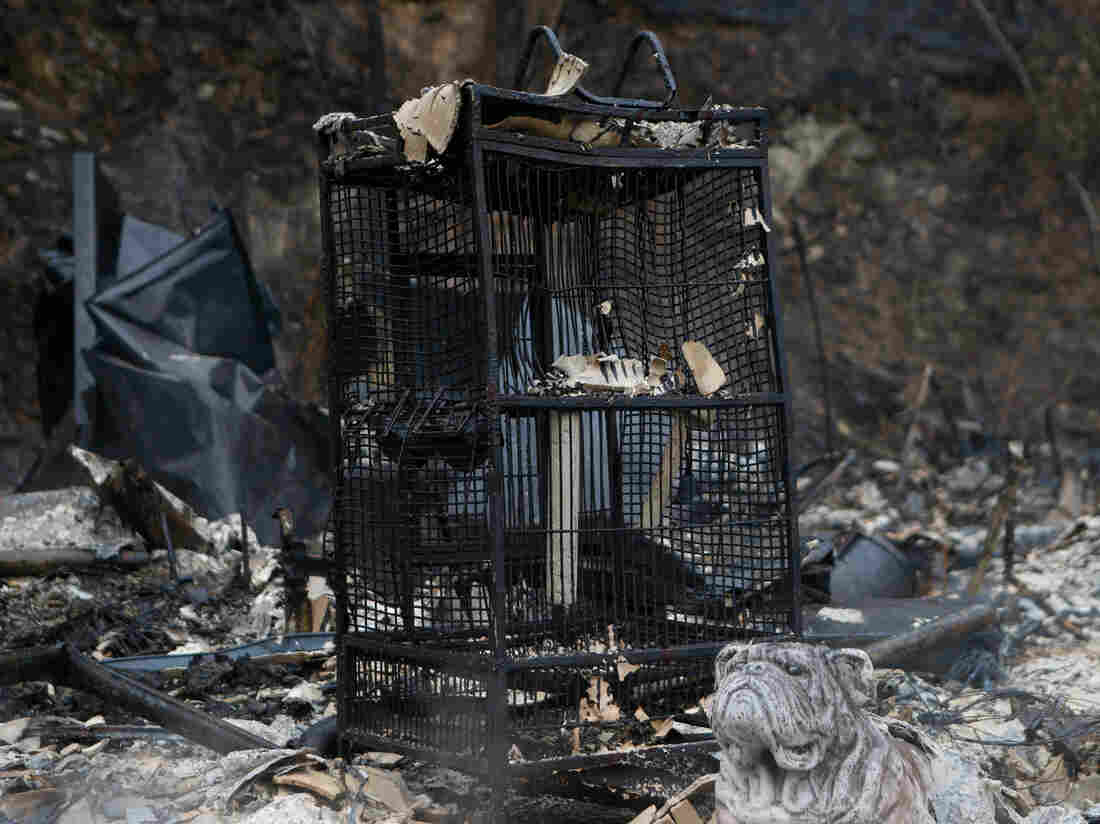 A charred birdcage sits in the smoldering remains of a home in Gatlinburg, Tenn. Brian Blanco/Getty Images hide caption 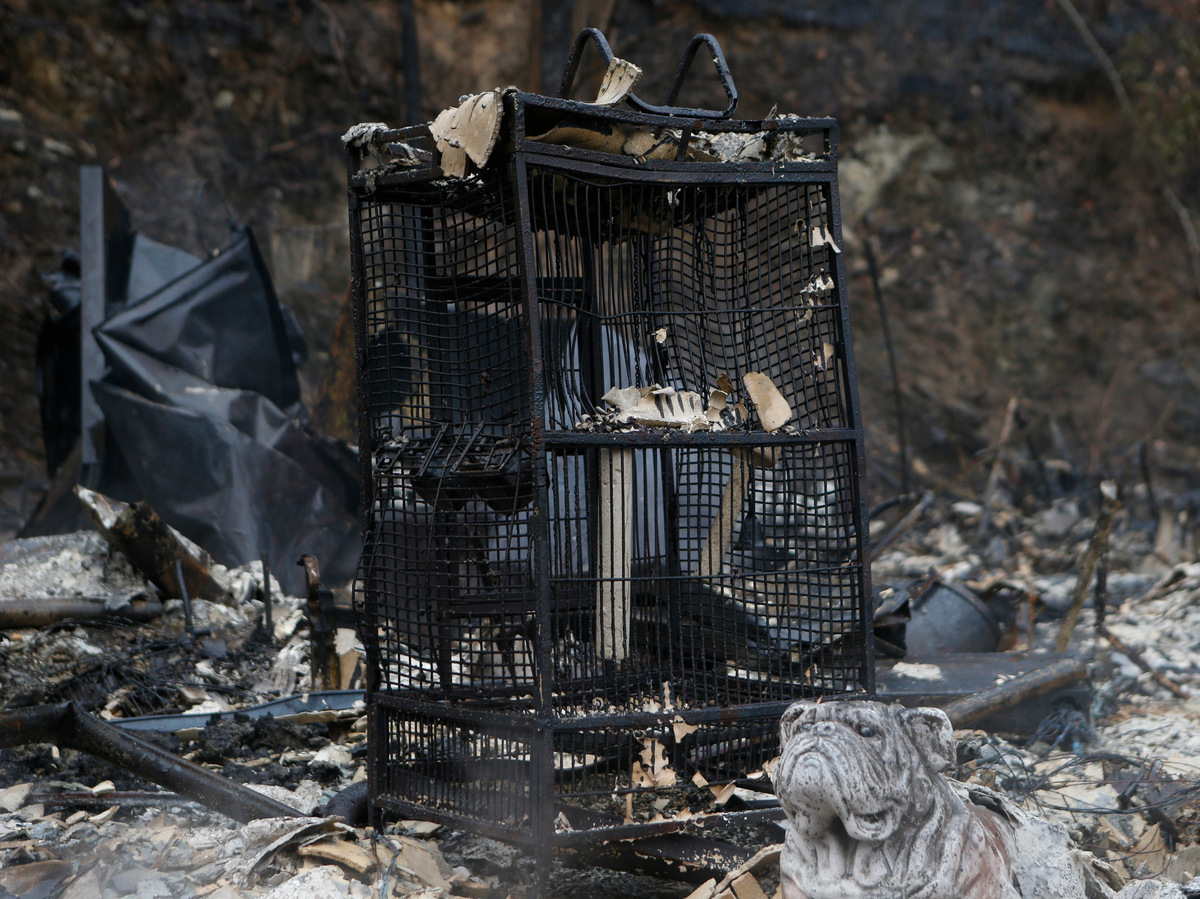 A charred birdcage sits in the smoldering remains of a home in Gatlinburg, Tenn.

The Knoxville News Sentinel reported that, although the deadly wildfire had been burning in nearby Great Smoky Mountains National Park for days before it moved into town, an emergency evacuation notice did not get to some residents until after the fire was already within city limits.

"The citywide evacuation order was never relayed directly to area mobile devices due to the constraints of the Integrated Public Alert and Warning System, which limits the text messages to 90 characters, Tennessee Emergency Management Agency spokesman Dean Flener confirmed Thursday.

" 'You cannot just tell them (to evacuate.) You have to tell them what to do,' Flener said. 'People will panic more and you will get people in dangerous situations because you have not told them more.'

"Instead, the evacuation notice was issued to area TV and radio outlets for broadcast — several hours after the flames had reached Gatlinburg."

More than 24 hours before the fire entered city limits, the National Weather Service issued a high wind watch for the area, warning of "winds of 25 to 40 mph with gusts over 60 mph possible across higher terrain."

Gatlinburg Fire Department Chief Greg Miller said at a press conference Thursday the fire had moved very quickly, overwhelming the resources of his department and national park fire authorities, who did not know that winds would gust as violently as they did.

"I believe it was around 5 p.m. on Monday I gave a press release that said there are zero fires within the city of Gatlinburg.

"Within that next 50 to 60 minutes, because of the wind pushing the ... fires closer to the corporate limits [of Gatlinburg], and [because] we had wind speeds started in excess of 87 miles an hour, we had trees going down everywhere. Power lines — all those power lines [falling] were just like lighting a match, because of the extreme drought conditions.

Much Of The Southeast U.S. Is Grappling With Drought

Despite the rain this week — including a destructive band of tornadoes that hit multiple southern states including Tennessee — much of the southeastern U.S., including eastern Tennessee, are still suffering from extreme drought conditions, according to the latest report from the U.S. Drought Monitor.

So far, the Gatlinburg fire, known as Chimney Tops 2, charred almost 18,000 acres of public and private land, according to the InciWeb national fire management system. The latest report said more than 450 people were fighting the wildfire, including a fire management team from Colorado. It said the blaze "was human-caused and is currently under investigation."

"While many areas within the basic fire perimeter did not burn, the city of Gatlinburg lies literally in the center of the fire perimeter," the update read.

"This fire hit the communities of Gatlinburg, Pigeon Forge, and surrounding areas adjacent to Great Smoky Mountains National Park hard as they were preparing for both Christmas and the final few weeks of a bustling tourist season. The feelings of loss are palpable."