Accessibility links
Researchers Confident Mysterious Pair Of Mummified Knees Belonged To Queen Nefertari : The Two-Way Italian archaeologists found a pair of mummified knees in Nefertari's tomb in 1904. For the first time, tests indicate that the knees belonged to the great queen herself. 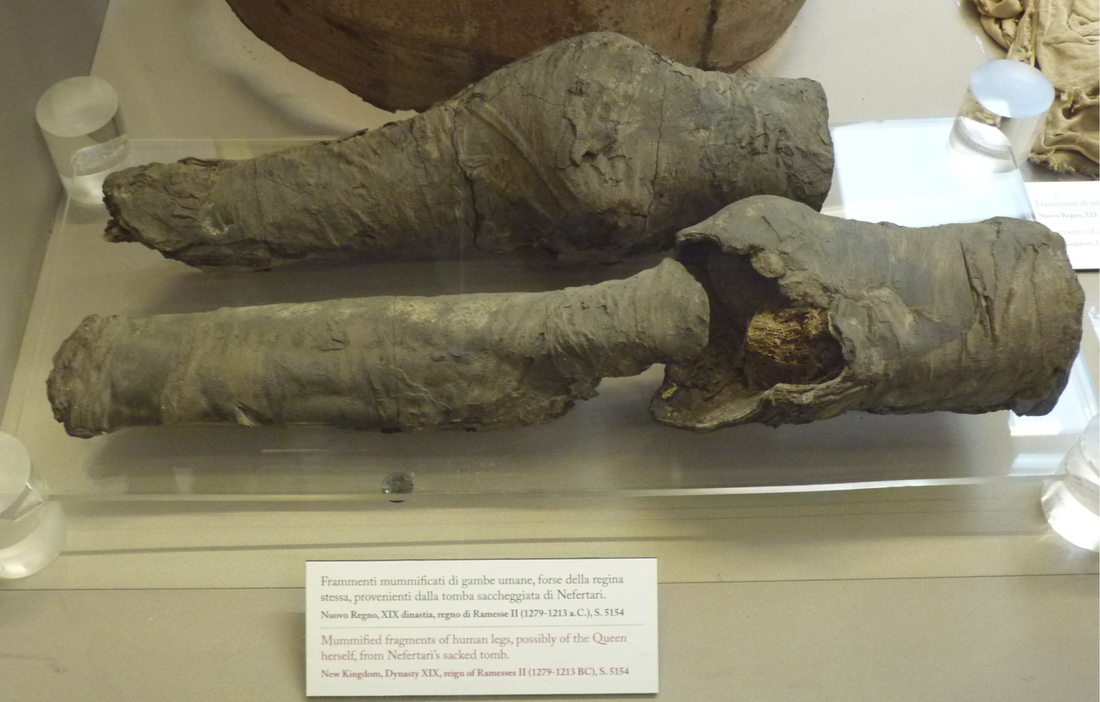 The mummified remains, shown in a 2014 exhibition in Museo Egizio Turin. Plos One hide caption 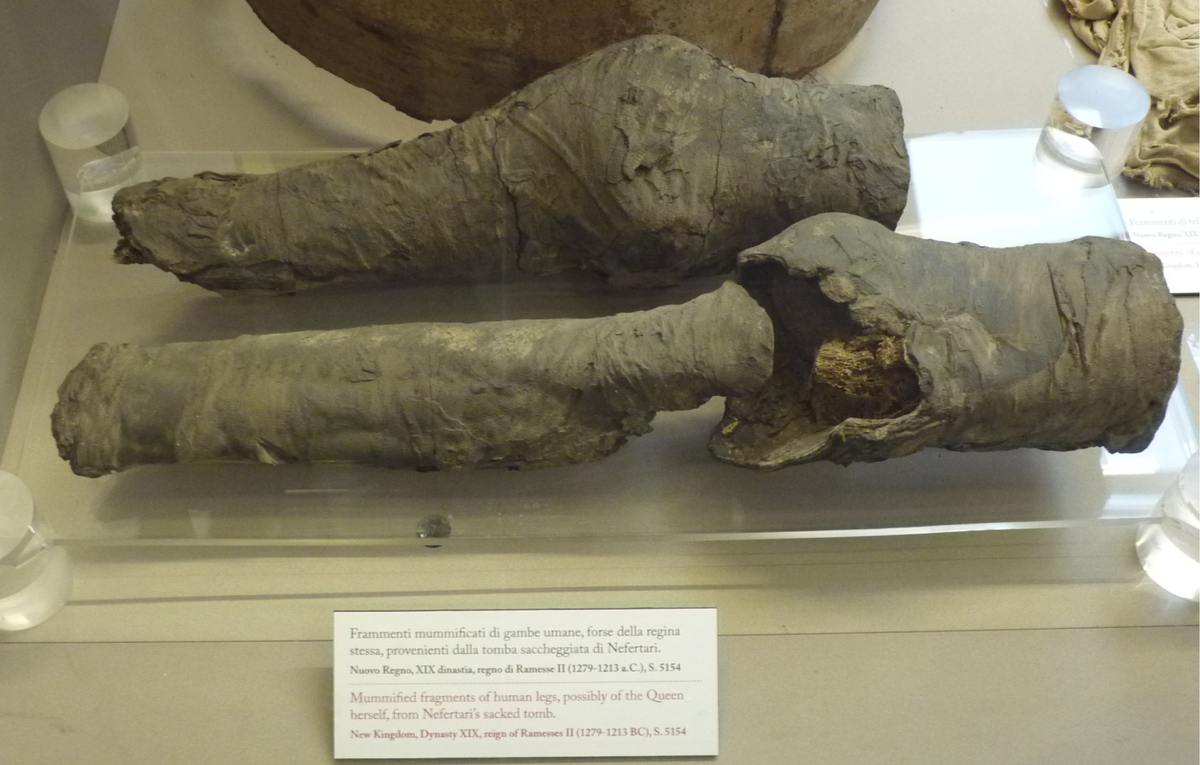 The mummified remains, shown in a 2014 exhibition in Museo Egizio Turin.

Italian archaeologists discovered the plundered tomb of Queen Nefertari in Egypt's Valley of the Queens in 1904, and amid the debris, they found a pair of mummified knees.

Now, for the first time, researchers have conducted a broad array of tests on the knees and say they are confident they belong to Nefertari, who was the wife of Pharaoh Ramses II and one of the most famous of Egypt's queens.

The knees, which are housed at the Egyptian Museum in Turin, Italy, have long been presumed to be hers. But Egyptologist Joann Fletcher from the University of York tells The Two-Way that until now, there was plenty of reason for skepticism.

"We know certainly in the Valley of the Queens, from previous work we've done, that individuals were often buried in earlier tombs," Fletcher says. "We had no way of knowing if these were Nefertari's remains or not. They could have been washed into the tomb at a later date during one of these occasional flash floods that do occur in that part of Egypt."

The international team of researchers carried out tests that included radiocarbon dating, genetic studies, paleopathology and chemical tests, and their findings were recently published in the journal Plos One.

They concluded that these knees belonged to a woman about 40 years old at the time of her death — which, as Fletcher says, was approximately Nefertari's age when she disappeared from the royal stage and is presumed to have died.

An analytical chemistry analysis of the materials used to mummify the knees suggests that they belonged to someone at the very highest strata of ancient society. "They'd been mummified to a very high standard using the most costly of ingredients. Very careful wrapping, a lot of attention to detail," says Fletcher.

Tests indicate that they belonged to someone about 5 feet, 5 inches tall, taller than average for the time. A pair of ornate sandals found in Nefertari's tomb are also designed for a person of about the same height.

"If a large team all come up with data that all points in the same direction, then we can say this seems the most likely possibility," Fletcher says. "You can never say 100 percent, this is definitely the person. But we are personally quietly confident that this is the great queen herself." 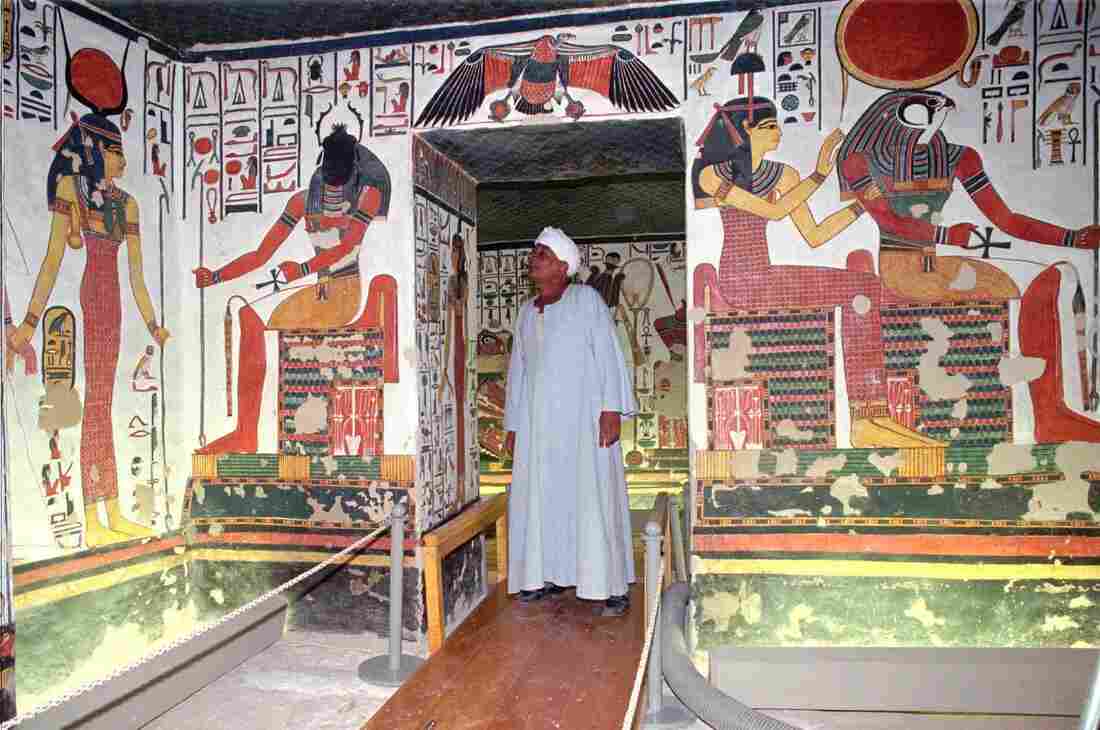 An Egyptian guard examines a doorway inside the tomb of Queen Nefertari in the Valley of Queens in Luxor, south of Cairo, in 1995. Mohamed El-Dakhakhny/AP hide caption

What most likely happened, Fletcher says, is that Nefertari's mummy was torn apart by frantic grave robbers trying to steal gold and jewelry in its wrappings before guards could stop them: "You do get that feeling that there's a real degree of ripping apart human remains to get to the wealth."

Identifying these knees, she says, adds to the picture of this key moment in ancient Egyptian history, the time of Ramses II. Fletcher says Nefertari played an important diplomatic role, exchanging correspondence and gifts with other queens around the ancient world.

But she is best-known for her beauty, and she brought a sense of glamour to royal events. "While Ramses II was the ultimate symbol of pharaonic might and power, very much flexing his pharaonic muscles on every temple wall in Egypt, it seems, Nefertari was usually the sort of, for want of a better word, eye candy," Fletcher says. Her great beauty is clearly visible in the renditions on her tomb walls.

"The irony is, of course, that we can never compare that to the physical reality because the knees are it. There's no face, there's no extra parts. It's just literally a mummified pair of knees and some of the legs," Fletcher adds.

Still, she says: "In Egyptology, you have to be happy with what remains after several thousand years."