Accessibility links
South Korea To Vote On Impeachment Of Scandal-Stricken President : The Two-Way A corruption scandal has destroyed public support for President Park Geun-hye; her approval rating has fallen to 4 percent. Now the legislature prepares for a vote on her impeachment.

South Korea To Vote On Impeachment Of Scandal-Stricken President

South Korea To Vote On Impeachment Of Scandal-Stricken President 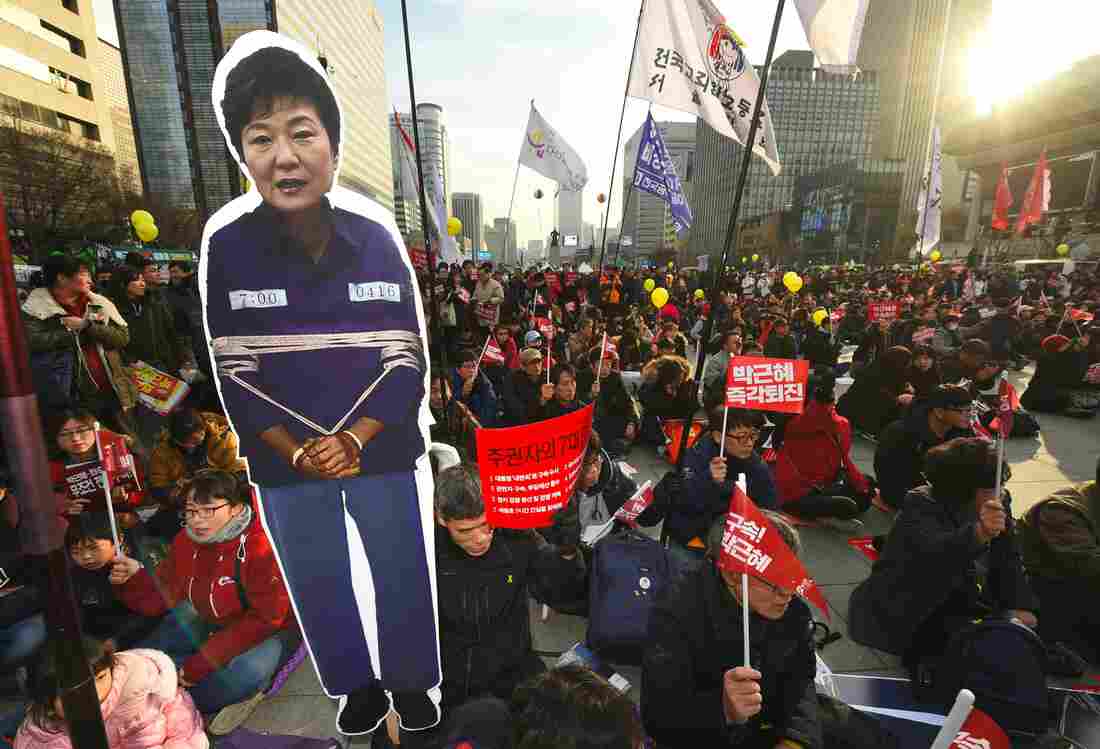 Protesters carry a portrait of South Korea's President Park Geun-Hye during a rally against Park in central Seoul on Saturday. Hundreds of thousands of protestors marched in Seoul for the sixth straight week on December 3, to demand the ouster and arrest of scandal-hit President Park Geun-Hye ahead of an impeachment vote in parliament. Jung Yeon-Je/AFP/Getty Images hide caption 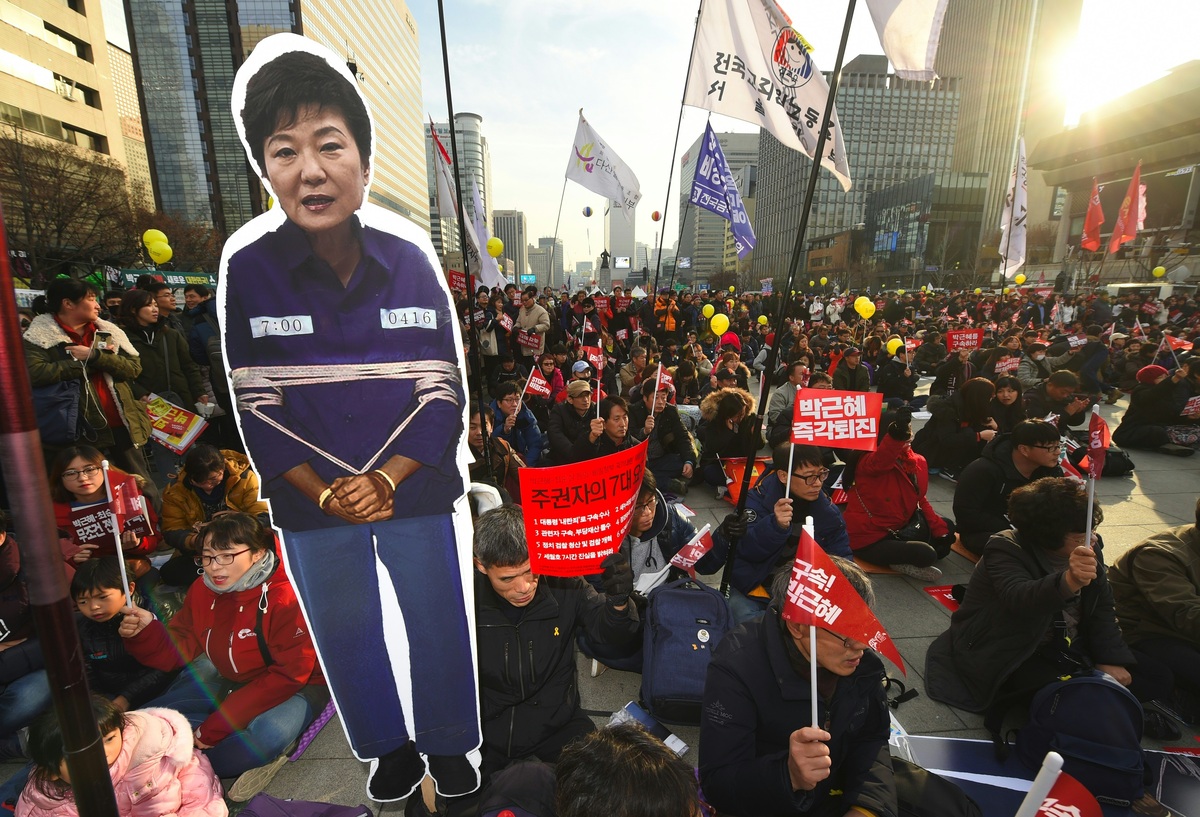 Protesters carry a portrait of South Korea's President Park Geun-Hye during a rally against Park in central Seoul on Saturday. Hundreds of thousands of protestors marched in Seoul for the sixth straight week on December 3, to demand the ouster and arrest of scandal-hit President Park Geun-Hye ahead of an impeachment vote in parliament.

South Korea's national legislature is preparing to vote on the possible impeachment of President Park Geun-hye, who has been engulfed in a massive scandal involving allegations of corruption, influence-peddling and ties to a cult.

The measure is coming up for a vote on Friday, a week and a half after Park said she would be willing to step down — but declined to resign.

The complex scandal has destroyed Park's public support; her approval rating has fallen to 4 percent, according to a recent Gallup Korea poll, Reuters reports.

Protests have brought hundreds of thousands of South Koreans onto the streets to demand Park's resignation.

As NPR's Elise Hu has explained, the revelations that have caused uproar involve a close friend of Park's, and a tangle of allegations of undue influence and access to confidential information.

"This scandal involves not only tens of millions of dollars and charges of influence-peddling, but of spiritual guides from a 'Shamanistic prophet,' voices from the dead and — wait for it — dressage, the competitive form of horse-dancing," Elise wrote in October.

The president's friend, Choi Soon-sil, is the daughter of a man who ran a church that's been described as a cult. She runs nonprofit foundations and is accused of using access to the president to put pressure on Korean conglomerates to rake in millions for private benefit. Some of the money allegedly went to cover equestrian training supplies for her daughter.

Special prosecutors have concluded that the president colluded in her friend's alleged crimes, Elise has reported — but Park is immune from criminal indictment as long as she's in office.

Park has also been criticized for her handling of the sinking of the Sewol ferry, a disaster that killed more than 300 people, most of them high school students.

Reporting for The Washington Post, Anna Fifield writes that every president in South Korea's history as a democracy has been caught up in some kind of bribery or corruption scandal.

"But those scandals were centered on relatives — usually brothers and sons — of the presidents, while this one is focused directly on the president herself, causing widespread public anger," Fifield writes. "Park, who is estranged from her siblings and has no children, campaigned for the presidency by saying that her lack of family meant she could be free from corruption."

The scandal has driven the calls for Park's resignation — or barring that, her impeachment.

The first step — the impeachment measure — is what's now on the table at the National Assembly.

If the measure fails, the opposition lawmakers have vowed to resign their seats, Xinhua reports.

The measure has been introduced but is currently in a mandatory 24-hour waiting period. The vote could happen as soon as 3 p.m. Friday local time (1 a.m. EST).