Accessibility links
A Message Of Tolerance And Welcome, Spreading From Yard To Yard : The Two-Way A church in Harrisonburg, Va., posted a simple message last year: "No matter where you are from, we're glad you're our neighbor," in three languages. Now the signs show up from D.C. to Detroit.

A Message Of Tolerance And Welcome, Spreading From Yard To Yard

A Message Of Tolerance And Welcome, Spreading From Yard To Yard 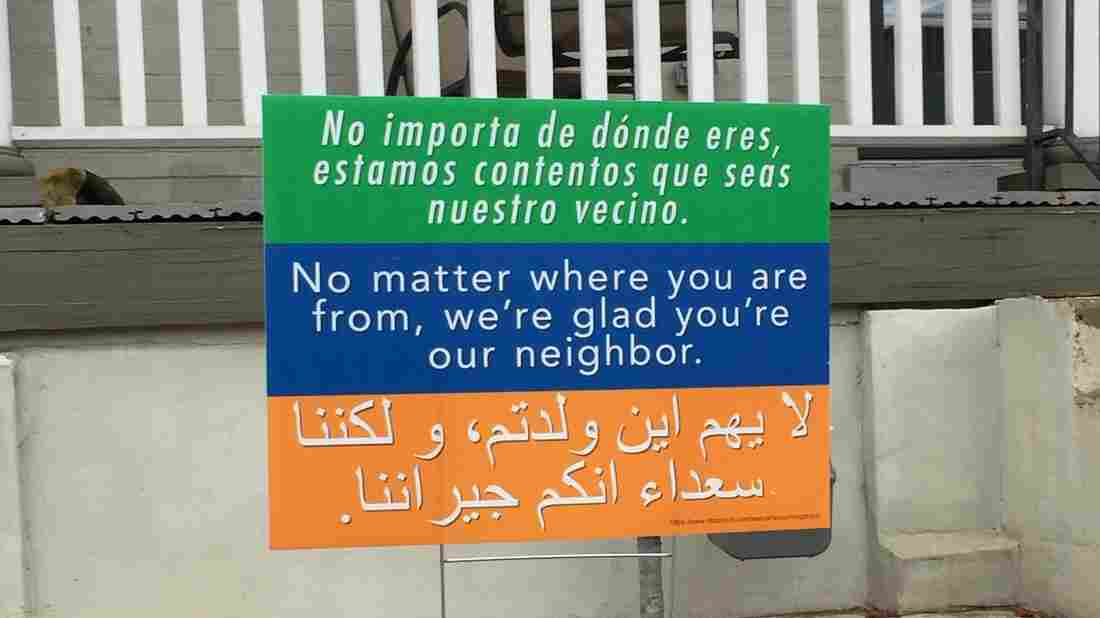 A sign in Washington, D.C., says "No matter where you are from, we're glad you're our neighbor," in three languages. It's a message that began at a church in Harrisonburg, Va., and is spreading to communities across the country. Courtesy of Drew Schneider hide caption 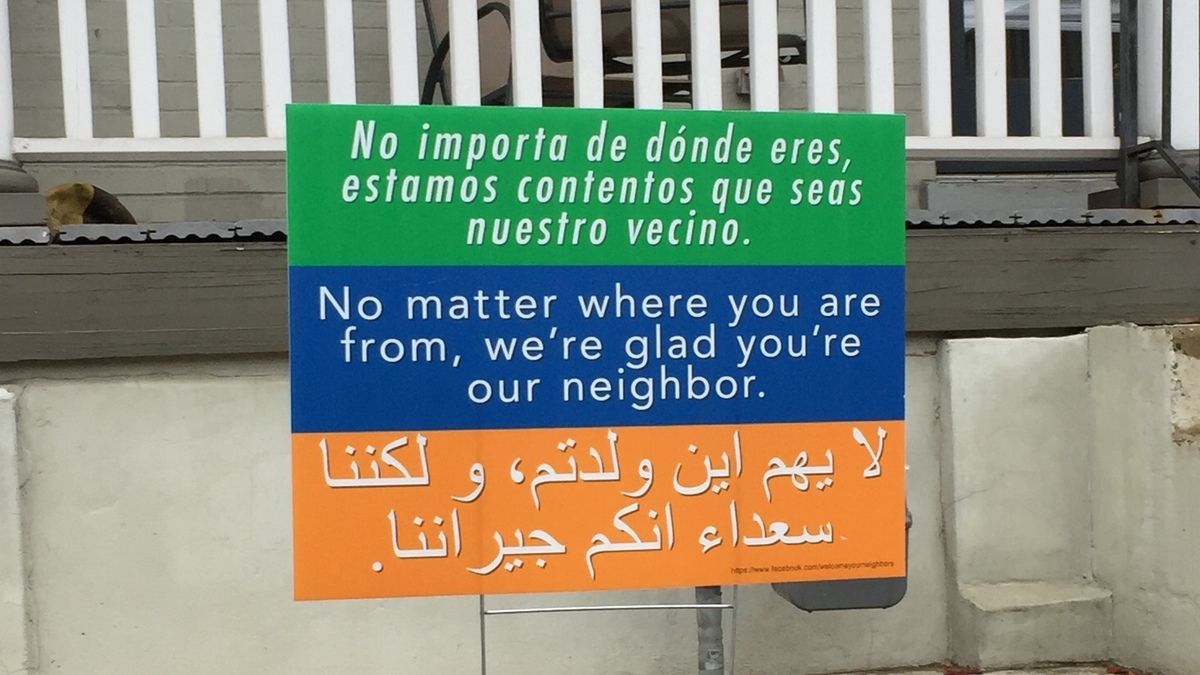 A sign in Washington, D.C., says "No matter where you are from, we're glad you're our neighbor," in three languages. It's a message that began at a church in Harrisonburg, Va., and is spreading to communities across the country.

It's a simple sign. One message — "No matter where you are from, we're glad you're our neighbor." Three languages: Spanish, English and Arabic.

They've popped up in Pennsylvania, Detroit, Wisconsin, North Carolina, and Canada – thanks to local printers, and without any national campaign.

You can trace the journey back by word of mouth, from neighbor to neighbor or friend to friend. One resident of Washington, D.C., picked up a sign in Harrisonburg, Va. Drew Schneider, the blogger behind petworthnews.org, snapped a picture on a walk, and posted it on Instagram. Now 350 residents are about to pick up their signs.

In State College, Pa., Penn State campus minister Ben Wideman saw a post about the signs on social media. He asked his parents, visiting his sister in Harrisonburg, to pick up 10 signs. Now, he's printed and distributed hundreds.

"My Muslim friends talk about how wonderful it is to see signs in Arabic around town, making them feel a little safer," Wideman says. "And our neighbor who speaks Spanish was moved to tears by seeing our sign in our yard."

The thousands of signs across the country all stem from a single, black-and-white, hand-painted sign on one church in Harrisonburg – Immanuel Mennonite.

Pastor Matthew Bucher was definitely not setting out to start a nationwide phenomenon. His sign went up last year after he was "pretty disappointed" with the rhetoric of the primary debates, especially as directed toward people who weren't born in the U.S.

"The church is located in the northeast part of Harrisonburg, which has a long tradition of being the African-American part of the city," he says. "But in the past 20 years it's also become home to a lot of people from Central America, the Middle East and around the world."

"That's why we did it in three languages — English, Arabic and Spanish," he explains. "Because those are the three most common languages spoken in our neighborhood." 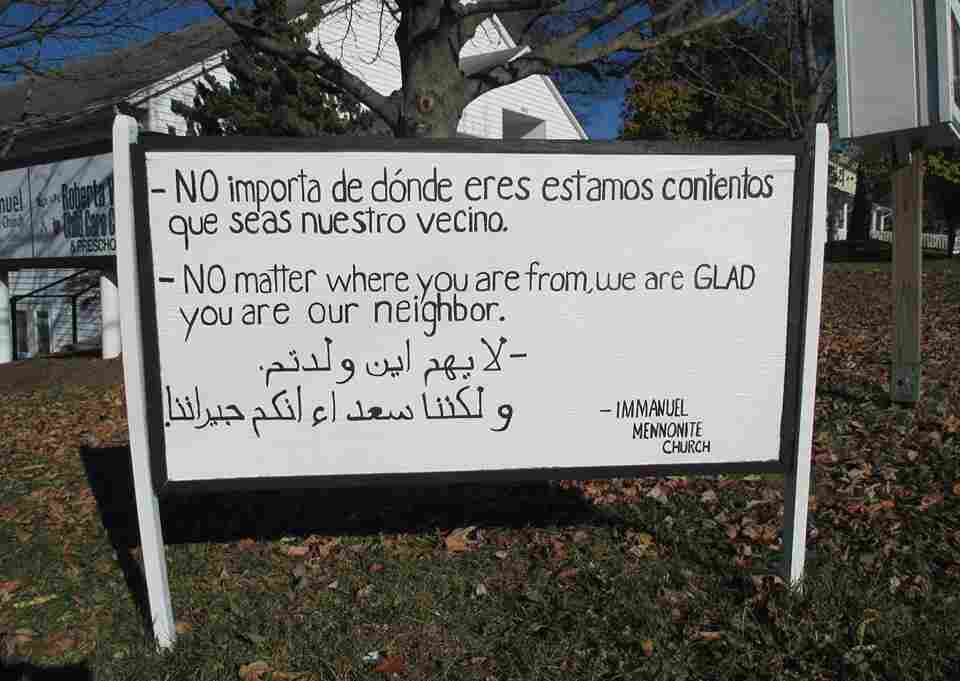 The original black-and-white wooden sign at Immanuel Mennonite in Harrisonburg, Va., has inspired thousands of yard signs. It was written by Pastor Matthew Bucher and translated with the help of congregation members and friends. Courtesy of Immanuel Mennonite hide caption 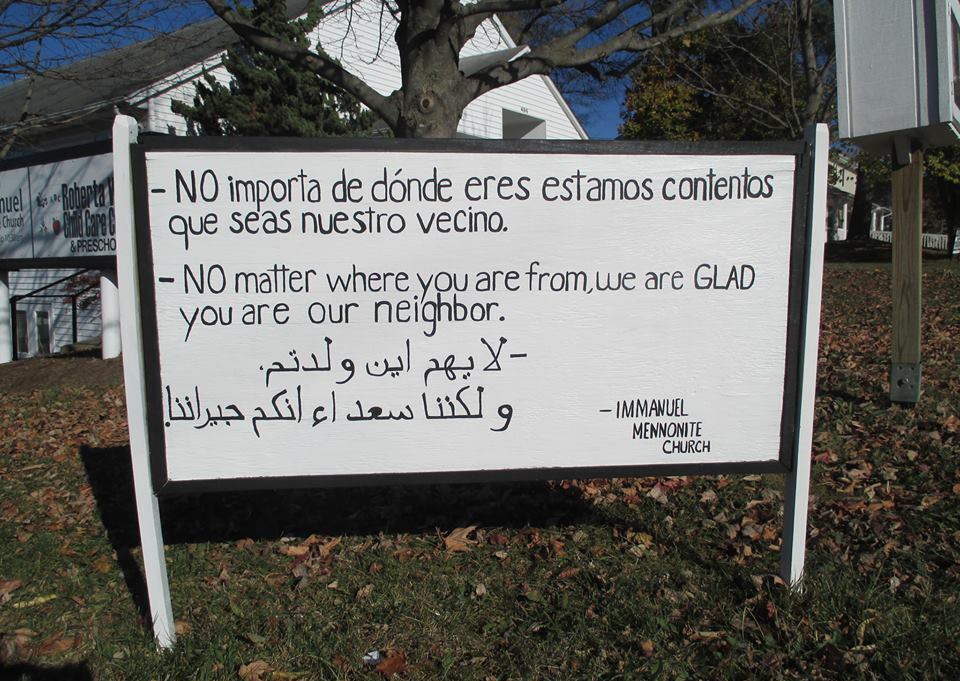 The original black-and-white wooden sign at Immanuel Mennonite in Harrisonburg, Va., has inspired thousands of yard signs. It was written by Pastor Matthew Bucher and translated with the help of congregation members and friends.

Spanish-speaking church members wrote one translation. Bucher wrote the other with the help of friends in Egypt, where he spent time working with the Mennonite Central Committee. A member of the congregation painted their sign by hand. "It was a collaborative effort," Bucher says.

A few months later, a group of local Mennonite pastors was trying to find a way to "say something positive," says Nick Meyer, a pastor at Early Church in Harrisonburg.

So they decided to take the sign's message and spread it more broadly. A friend of Meyer's, Alex Gore, turned the trilingual message into a simple, colorful yard sign, and they printed up 200. The pastors distributed them, encouraging church members to pair the sign with concrete acts of outreach to their neighbors.

The signs spread throughout Harrisonburg, a small city of some 50,000 people.

"I had a bike accident last week and it happened to be right outside of the mosque," Bucher says. "And I looked at it and I saw one of our signs and I was like, 'This is awesome – I feel really cared for at this moment!' "

As Mennonites visiting Harrisonburg brought signs back to their home communities, the message spread to other towns. Immanuel Mennonite printed another 300 signs, then another thousand. They posted the PDF of the sign on their website and encouraged anyone who is interested to download and print as many signs as they want, coordinating mass orders on a Facebook page called "Welcome your Neighbors."

They've put together other translations, by request: French for one community, Burmese for another.

Bucher's sign was a statement born out of Mennonite belief. "This is a symbol of Jesus' command to love your neighbor," he says. "And as followers of Jesus, we follow someone who was himself a refugee."

But Bucher and Meyer embrace the fact that the message has spread beyond their faith. In fact, the yard signs were intentionally designed not to specify a connection to the Mennonite church.

"That way anybody who resonates with that, anybody who wants to promote that feeling of welcome and hospitality, will feel free to grab a sign," Meyer says.

By the thousands, people have.

The response has been overwhelmingly positive, with very few objections or acts of vandalism. A few people have objected that it's just a sign, not an action. And everyone agrees on that point.

"Does a sign change anything on its own? No, it doesn't," Schneider, who has helped distribute signs in D.C., says. "But it expresses that this is a person who believes this, and that's a great sign, literally and figuratively. It shows that it's a community that's caring, not apathetic."

"That's the thing with a symbol," Bucher says. "A symbol is something that stands for something else. ... The sign is this symbol to us, of how we live."