Accessibility links
Venezuela Seizes Nearly 4 Million Toys, Saying They're Overpriced : The Two-Way "Boys and girls of the country will have a happy Christmas," says Venezuela's national superintendent for the defense of socioeconomic rights. 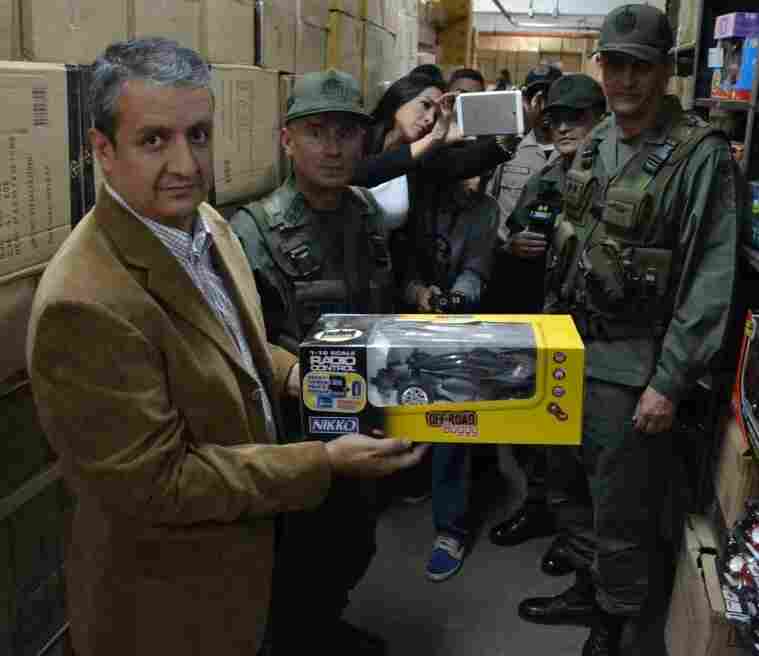 A photo released by Venezuelan government agency Sundde shows the group's head, William Contreras, with one of the toys that have been seized from a distributor's warehouses in Caracas. Sundde hide caption 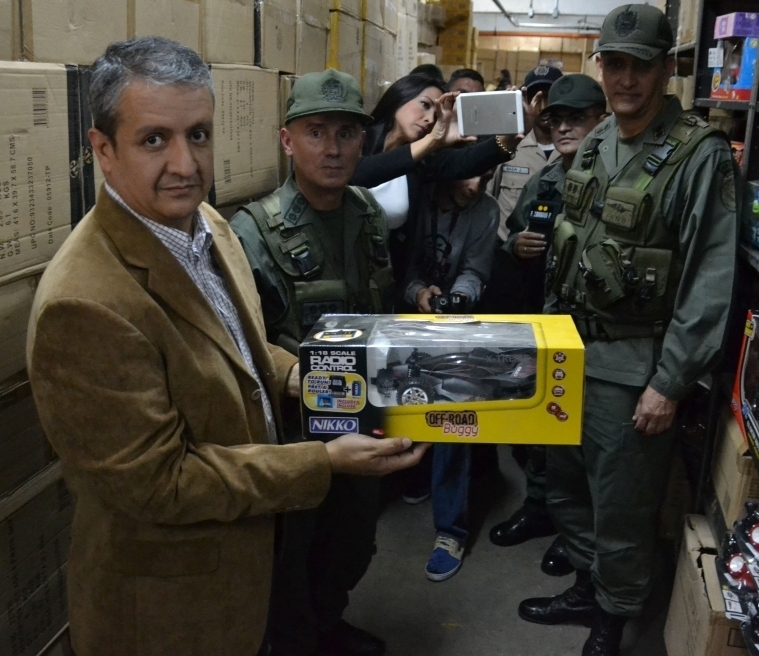 A photo released by Venezuelan government agency Sundde shows the group's head, William Contreras, with one of the toys that have been seized from a distributor's warehouses in Caracas.

Dolls, bicycles and playsets are among the nearly 4 million toys that have been seized by Venezuela's government. The toys will now be sold at sharp discounts, after a regulator said a large toy distributor had hoarded the toys to push prices higher.

"Boys and girls of the country will have a happy Christmas," said William Contreras, Venezuela's national superintendent for the defense of socioeconomic rights. He added, "We will guarantee a child" gets a present.

The toys were found in several Caracas-area warehouses owned by the Kreisel toy company. In addition to accusing the company of creating scarcity to boost prices, the government says Kreisel used dollars that it acquired at a special government exchange rate to buy the products between 2008 and 2014 — and that stores have recently complained that the distributor won't fill their orders.

"The government claims that businessmen and traders hoard goods for long periods to speculate on prices," reports the Local Committees of Supply and Production (CLAP), the organization that will handle the redistribution of the toys. "Venezuela suffers the highest inflation in the world, estimated at 475 percent for 2016 by the IMF, and the currency lost 75 percent of its value against the so-called 'black dollar' since last September."

Kreisel hasn't issued a public statement about the seizure, but the company seems to disagree strongly with the government's action. On its Twitter feed, Kreisel retweeted more than 20 messages of support and solidarity from people and organizations, including notes that accuse the government of abusing its powers.

Sundde, the nickname of the agency Contreras heads, says the company used the toys as part of an "arsenal used by the company in the economic war against the people, without regard to the individual rights of the boys and girls of the country."

Discussing the case, Contreras said the toy company had said the toys were either out of fashion or sold out. His agency released video that showed rows of boxes of toys stacked high in Kreisel's warehouses. At least two arrests have been made, and Sundde says they've asked prosecutors to keep others who may have played a role from leaving the country.

The toy raid is one of several actions Venezuela has taken to try to ease its troubled economy. Since November, the government has been ordering steep price cuts on clothes and other essential items. The economic crisis has sparked protests, looting, and long lines. As NPR reported back in May, shortages have even touched the country's supply of beer.

After the toy warehouse operation, Contreras and his staff visited stores in the popular Sabana Grande shopping district, where they posted signs on stores that announced price cuts of 30 percent or more.