Accessibility links
As East Aleppo Falls, Accounts Of Carnage — Then A Cease-Fire : The Two-Way Reports from inside east Aleppo described indiscriminate killing and scenes of horror and despair. Now a cease-fire has taken hold, and there's hope evacuation might be possible.

As East Aleppo Falls, Accounts Of Carnage — Then A Cease-Fire 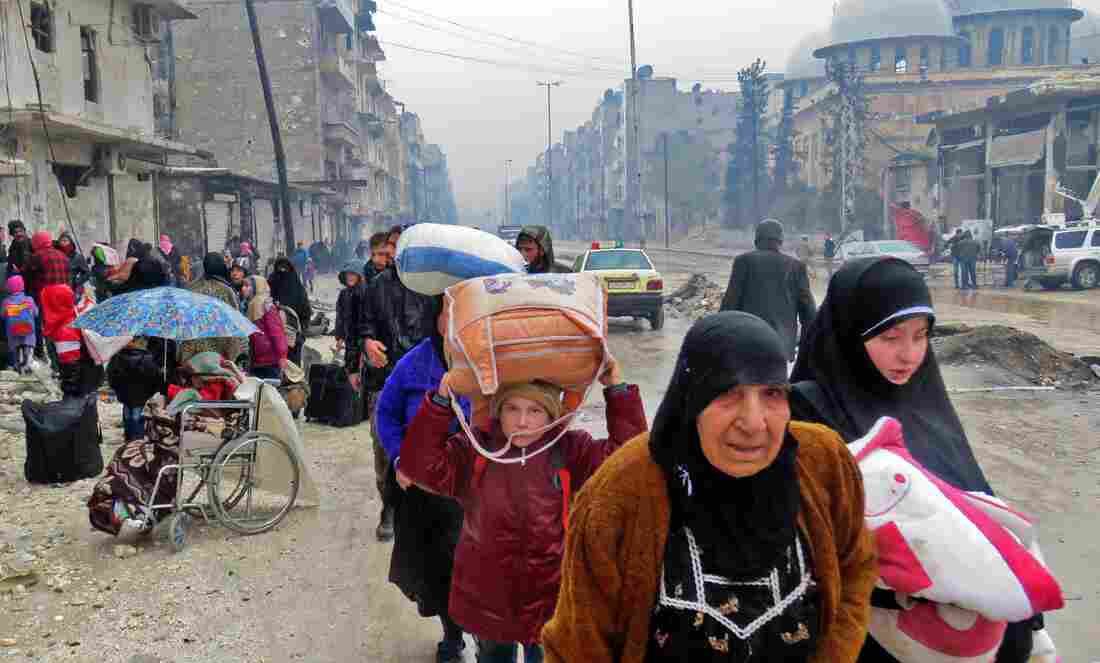 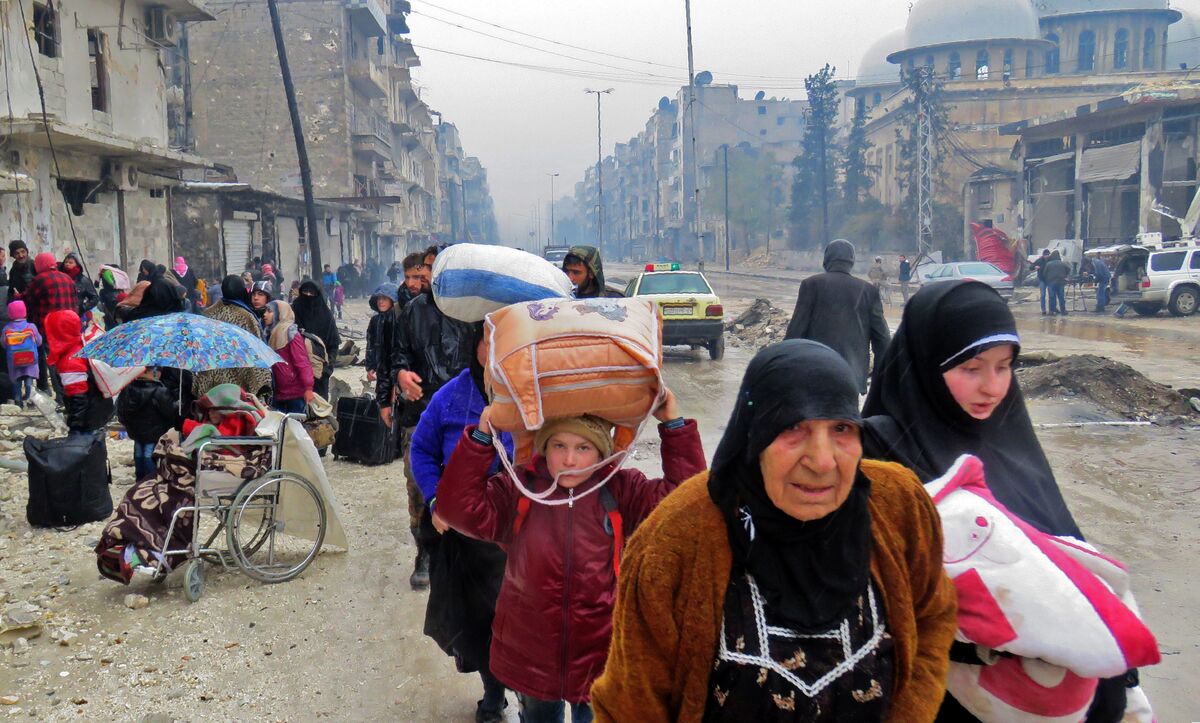 As the forces of Syrian President Bashar Assad advanced on the last rebel-held section of Aleppo, aid groups and activists described horrific scenes of death and bloodshed.

Why The Battle For Aleppo Is So Important

Now rebel groups say a truce has been reached with Russia, and there's hope that civilian evacuations will be possible on Tuesday night.

"A rebel spokesman says a deal has been reached whereby fighters and civilians in the last rebel holdout will be able to leave," NPR's Alice Fordham reports. "The U.N. Secretary-General Ban Ki-moon says Russia and Turkey have facilitated talks, and people inside Aleppo say fighting has now stopped and they hope the evacuation will begin tonight.

"Russia's ambassador to the U.N. Vitaly Churkin says people will be able to choose where they go — many within the opposition area are afraid to go into government-controlled areas and would rather head to another rebel-held zone," Alice says.

The news of a cease-fire comes after days of horror in east Aleppo. U.N. agencies say they have received reports of indiscriminate killings and children under fire, and aid groups are desperately calling for parties to observe "the basic rules of warfare — and of humanity," as the International Committee of the Red Cross put it. 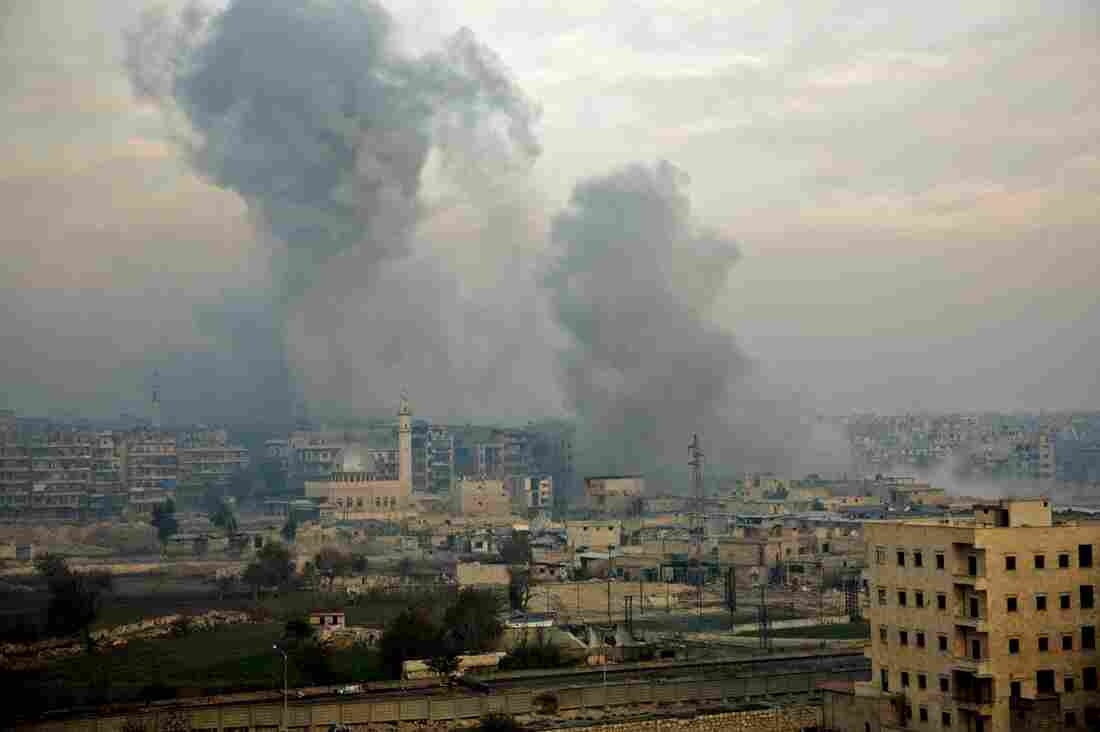 Smoke billows from the former rebel-held district of Bustan al-Qasr in Aleppo on Monday during an operation by Syrian government forces to retake the embattled city. Karam Al-Masri/AFP/Getty Images hide caption 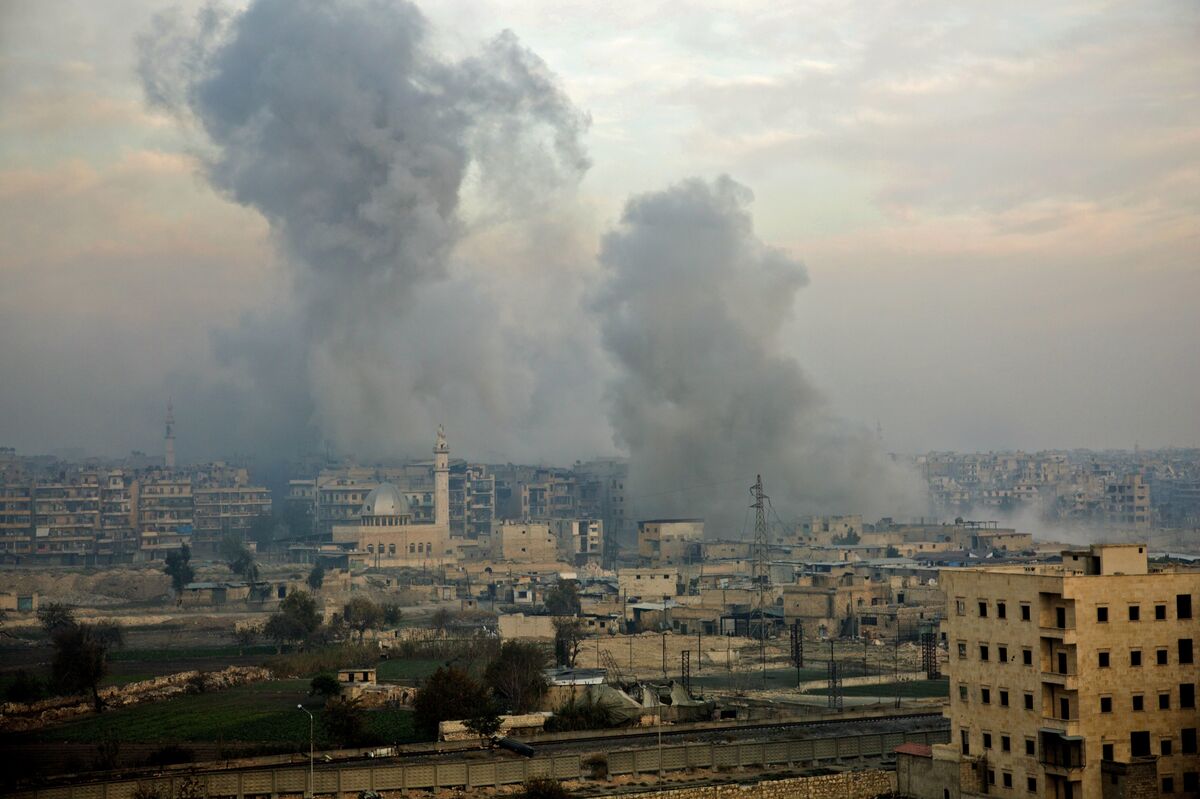 Smoke billows from the former rebel-held district of Bustan al-Qasr in Aleppo on Monday during an operation by Syrian government forces to retake the embattled city.

Before a cease-fire was announced, residents who remained in the small patch of rebel-controlled Aleppo were saying goodbye to loved ones on social media.

Aleppo — once Syria's largest city, and a major commercial hub — has been divided between government and rebel forces for four years. In the past month, Assad and his allies have waged an offensive to retake the entire devastated city.

"A month ago, rebels held the eastern half of the city," Alice reports. "Now they are crammed into a few blocks, along with many civilians."

Numbers are hard to confirm, Alice says, but there are probably tens of thousands of people, and maybe up to 100,000, still in the thin sliver of the city where rebel forces remain.

"People are contacting NPR saying the destruction is unimaginable, the streets are littered with carnage," she tells Morning Edition. "The White Helmets, who are a volunteer rescue organization, say they can't give a body count anymore."

UNICEF says it has received reports of unaccompanied children trapped in a building in eastern Aleppo that is currently under fire, The Associated Press reports. 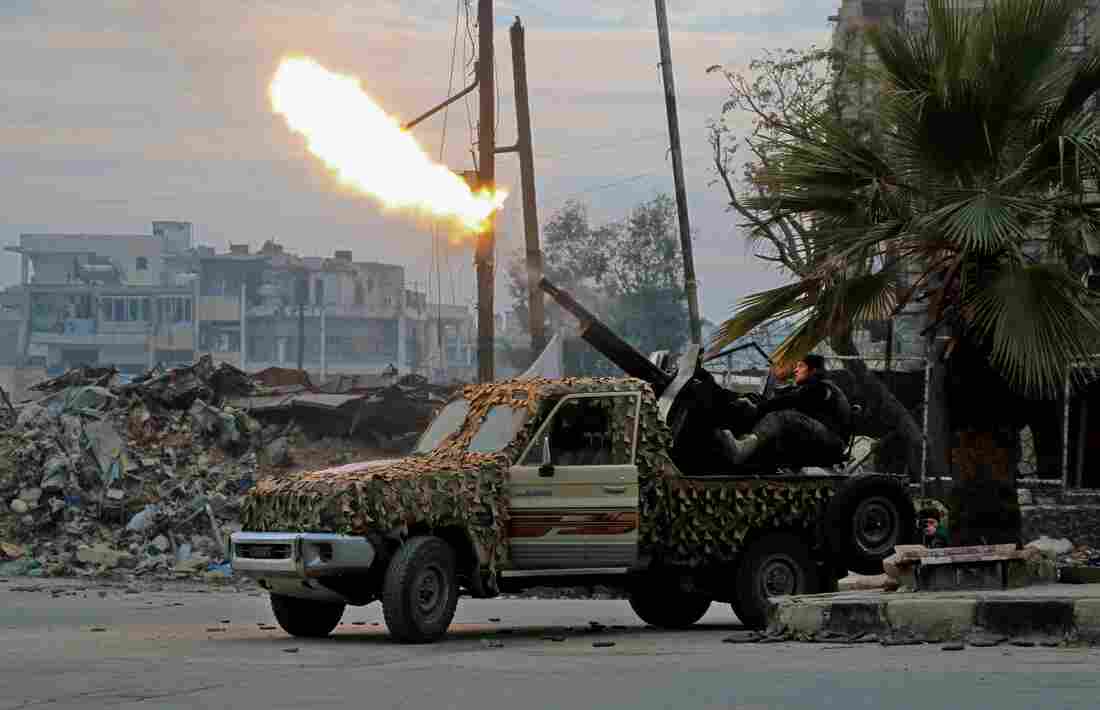 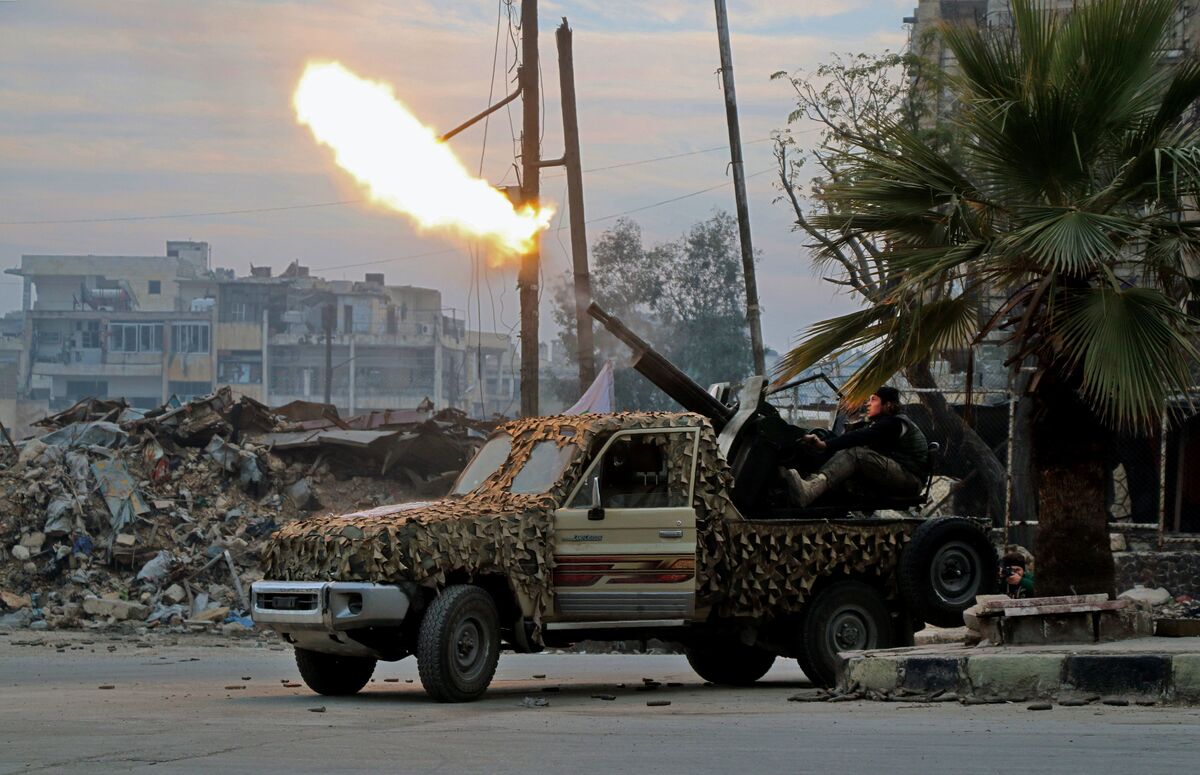 Fighters of the Free Syrian Army fire an anti-aircraft weapon in Aleppo's rebel-held area of Mashhad on Monday, as they battle Syrian government forces.

A spokesman for the U.N. human rights office says it has received reports of regime forces killing at least 82 civilians "on the spot" in east Aleppo, including women and children.

Jens Laerke, of the U.N.'s Office for the Coordination of Humanitarian Affairs, described a "complete meltdown of humanity" in Aleppo.

The U.N. secretary-general has also expressed alarm over reported atrocities, but without attributing responsibility to either side in the fighting, and with a note that the U.N. could not independently verify those reports.

"As the battle reaches new peaks and the area is plunged into chaos, thousands with no part in the violence have literally nowhere safe to run. ... We urge the parties to consider the fate of civilians trapped by the ongoing fighting and do their utmost to spare and protect them," the International Committee of the Red Cross said. "This may be the last chance to save lives."

Some Western diplomats have been desperately pushing to establish humanitarian corridors, negotiate a brief cease-fire and evacuate as many civilians as possible, as NPR's Eleanor Beardsley reported on Morning Edition.

But as of Tuesday morning, those negotiations had failed. French parliamentarian Herve Mariton tells Eleanor that the Russian forces supporting Assad want "an absolute victory and an absolute defeat from the people of [east] Aleppo."

Mariton was part of a bipartisan French delegation that traveled to Syria to try to save civilians; he spoke with NPR by phone from the Turkish-Syrian border. Here's more from Eleanor:

" 'The military battle is lost,' [Mariton says]. 'The territory controlled by people from Aleppo East is getting smaller and smaller and the population is denser and denser.'

"Mariton says it wouldn't take much to prevent a massacre, but the West must act immediately: 'A 5-kilometer corridor with security enforced with our troops — that means French, European, even Americans if need be — for a 24-hour period to help evacuate the people from Aleppo East.'

"The United Nations is ready to go, says Mariton. It just needs guarantees of safe passage.

" 'They've got the ambulances nearby, the coaches, all the organization necessary. But the U.N. is [incapable] of doing anything, politically speaking, when the Russians say no.'

"But with no Western government ready to commit troops or act to stop the bombing, the French delegation's appeal is little more than a symbolic gesture." 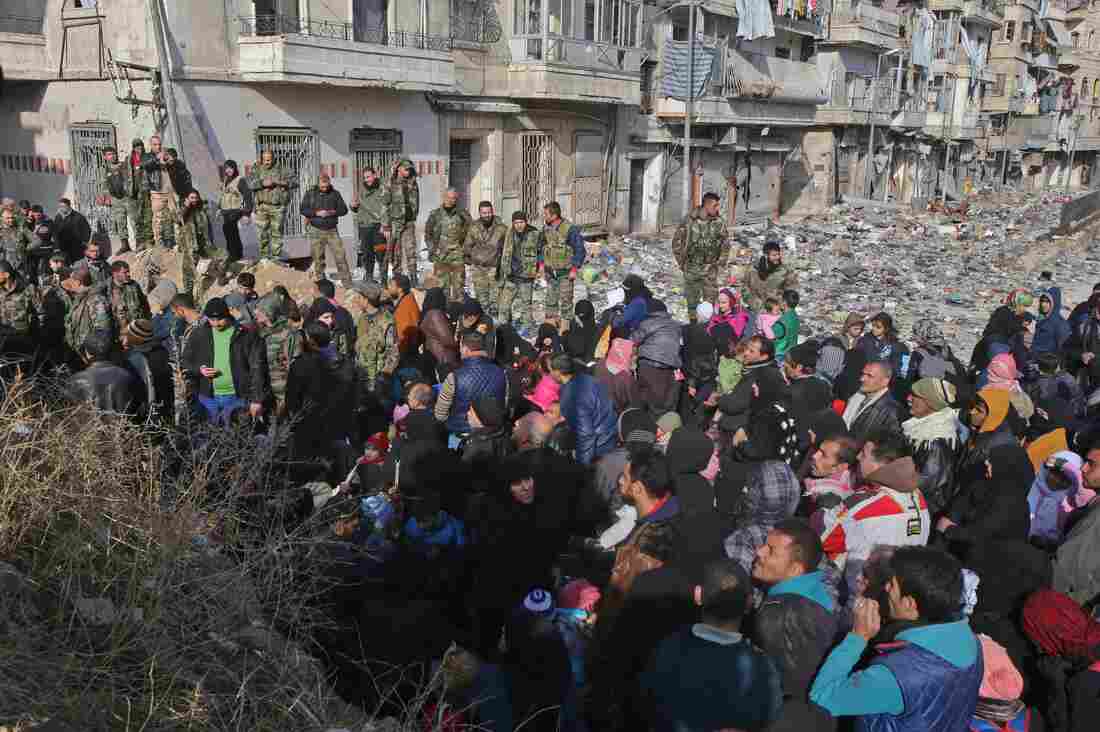 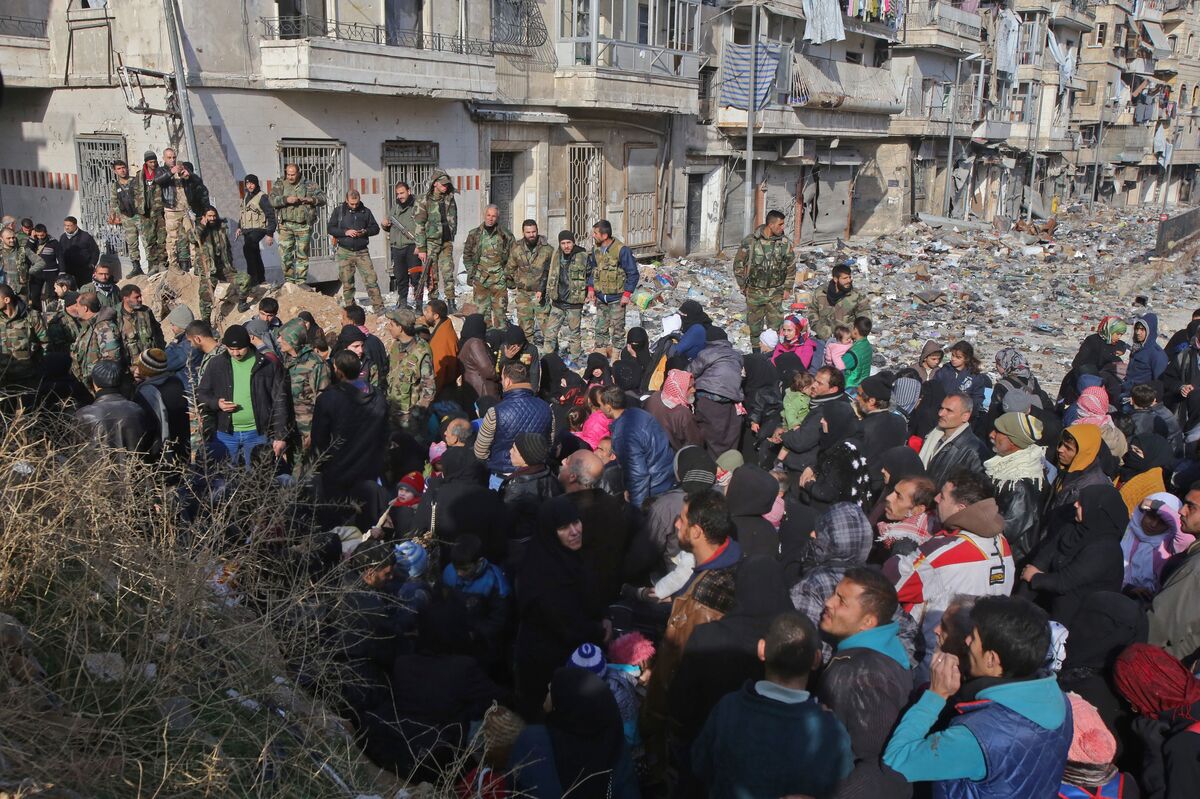 Syrian residents fleeing violence gather at a checkpoint, manned by pro-government forces, in the Maysaloun neighborhood of Aleppo on Thursday.

The Last Hospital In Eastern Aleppo Is No More

"When many of the neighborhoods were retaken, people were able to get out — Bashar al-Assad's Russian allies have at times been live-streaming drone footage of this, and they say 100,000 people have been able to get out," she says. "And the people who are still inside, some of them probably ran away toward the rebel forces rather than toward the government side when fighting intensified. 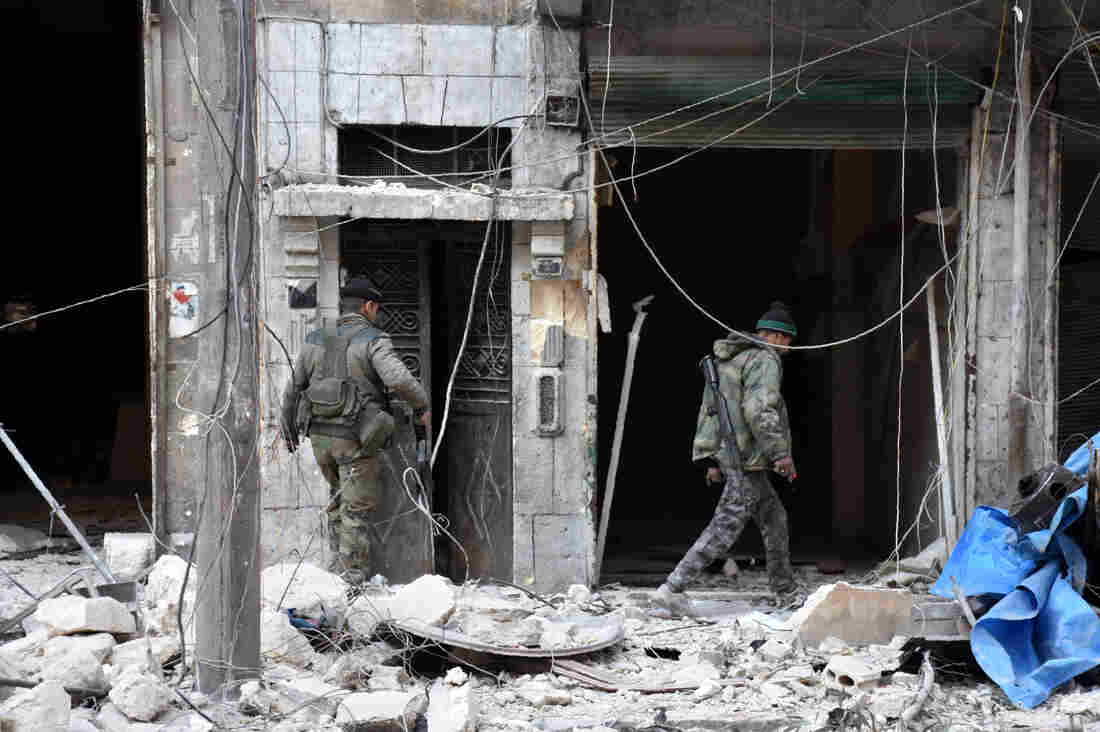 Syrian pro-government forces inspect a building in the al-Maadi district of eastern Aleppo on Sunday after retaking a large part of it from rebel fighters. George Ourfalian/AFP/Getty Images hide caption 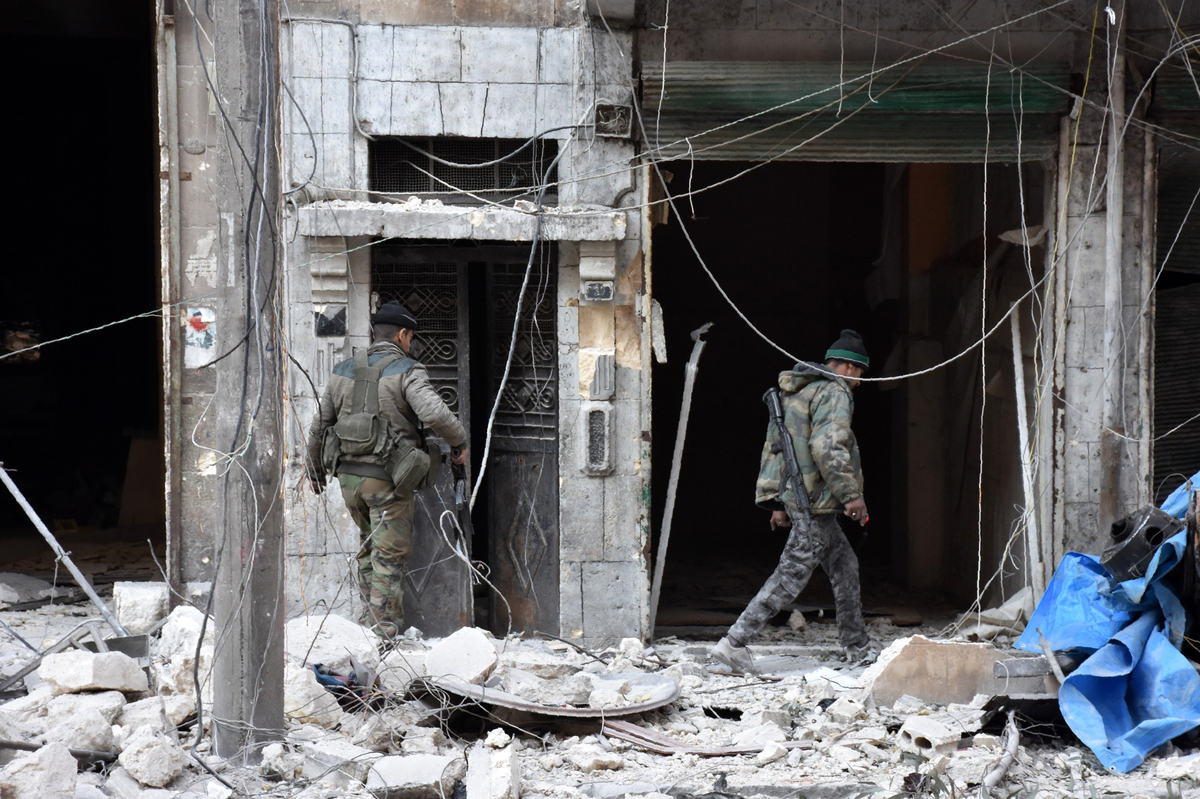 Syrian pro-government forces inspect a building in the al-Maadi district of eastern Aleppo on Sunday after retaking a large part of it from rebel fighters.

"Obviously they want to be in a safe place, but some of them don't believe being in a government area is a safe place for them — they're afraid of being put in one of Syria's notorious jails, or having to do compulsory military service, essentially, switching sides," she says.

"We're hearing that hundreds of people have been detained. The Syrian government says that these people, usually men ... are being checked to see if they are allied with any of the extremist rebel forces, including groups linked to al-Qaida."

In general, civilians who have made it into government-held Aleppo appear to be largely safe, based on reports, Alice says, although concerns continue about the behavior of Assad's forces and accompanying militias.

Meanwhile, inside east Aleppo, the civilians who have not made it to safety are stuck in increasingly dire conditions — with desperate and despairing "final messages" posted on social media.

The BBC collected some of those tweets and videos, including one from a journalist who said he was speaking no longer as a reporter but as "an average person here in besieged Aleppo. ... this might be close to, if not, the last communication."

The Washington Post gathered others. In one video an English teacher said: "No place now to go. It's the last place. ... We didn't want anything else but freedom. You know, this world doesn't like freedom, it seems."

In tweets and videos, individuals in east Aleppo thanked supporters, said goodbye, and braced for death or capture.

"People in the area report carnage and destruction, no food or fuel, no medical care for the wounded," Alice reported. "And Assad's forces are still advancing."