Accessibility links
Websites Promoting 'Pizzagate' Conspiracy Theorgy Remove Content : The Two-Way Some text and videos that spread false information about a Washington, D.C., pizza restaurant were taken down after a man went there with a gun to "self-investigate." 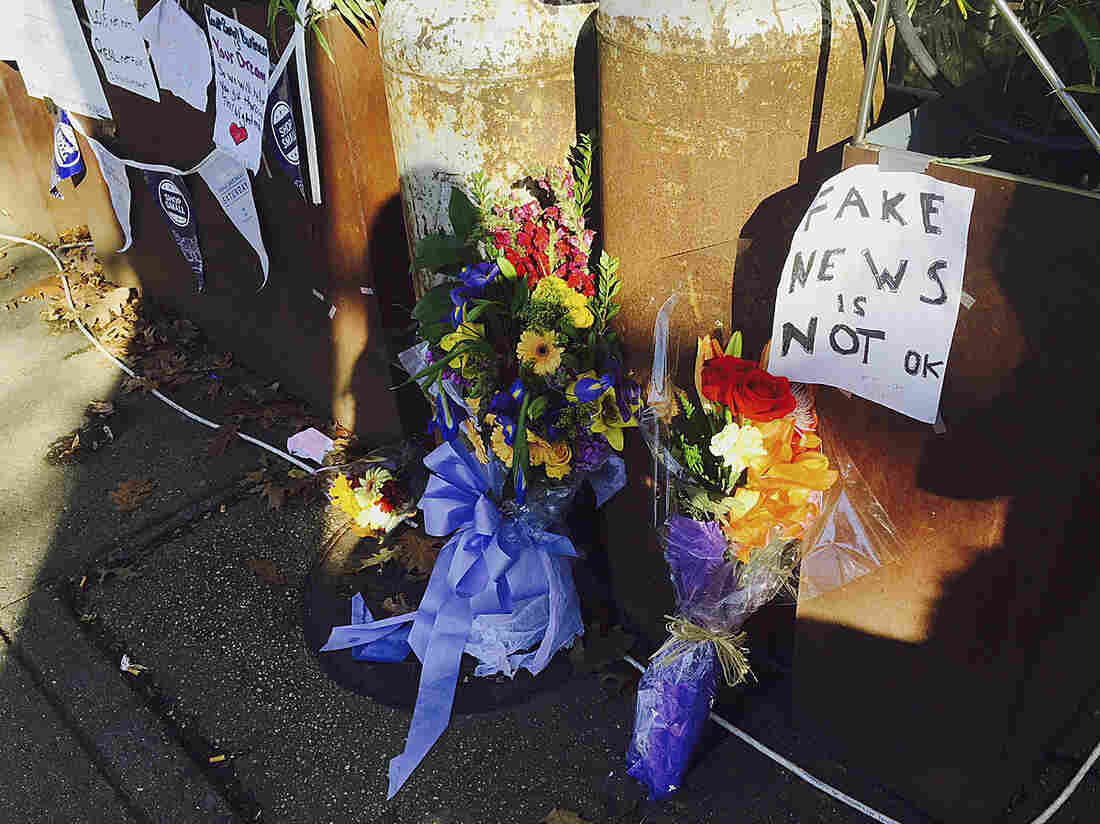 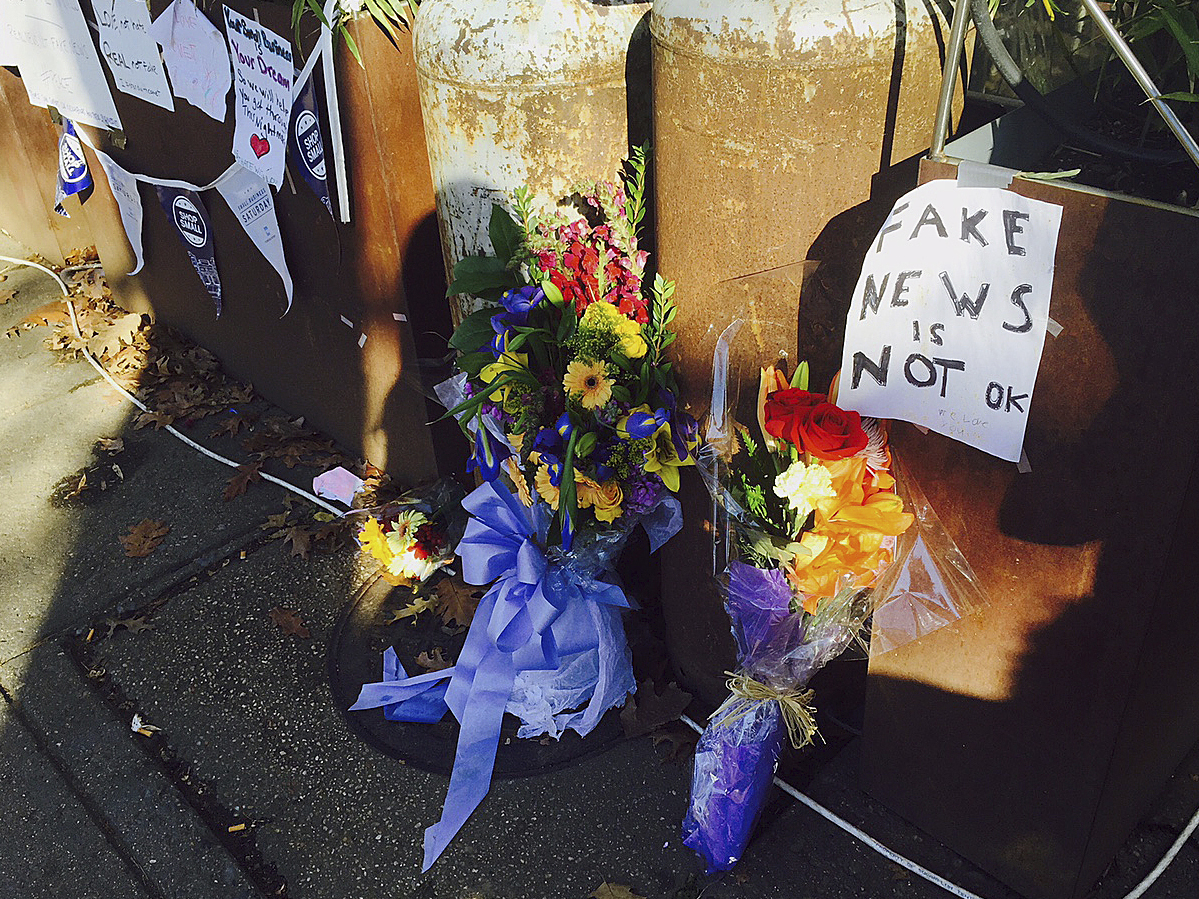 On Dec. 4, a man named Edgar Welch walked into a Washington, D.C., pizzeria with two loaded guns and demanded to search the premises before firing one of the weapons and, eventually, being arrested.

A criminal complaint filed in U.S. District Court this week lays out the FBI's evidence that Welch had been reading websites, listening to radio broadcasts and watching at least one YouTube video that led him to believe, incorrectly, that child abuse was occurring in hidden rooms at the restaurant, Comet Ping Pong.

You can read more here about how the so-called Pizzagate lie got started, but briefly:

"Internet users have developed a wholly fictitious conspiracy theory that maintains Comet Ping Pong is the site of an international satanic child sex abuse cabal hosted by powerful Democrats, including Hillary Clinton. Speculation and fabrications tied to the bizarre conspiracy theory have been relentlessly circulated by politically motivated fringe sites."

The prosecution of Welch, who is from North Carolina, for illegally transporting firearms with the intent to commit a crime will almost certainly include evidence from the Internet, as the criminal complaint makes clear.

But as the case moves forward, a website that amplified the conspiracy theory has removed content related to it, although archived versions are still accessible to authorities.

The website Infowars.com has removed a misleading page titled: "PIZZAGATE IS REAL: SOMETHING IS GOING ON, BUT WHAT?" as well as a YouTube video about the fictitious plot. 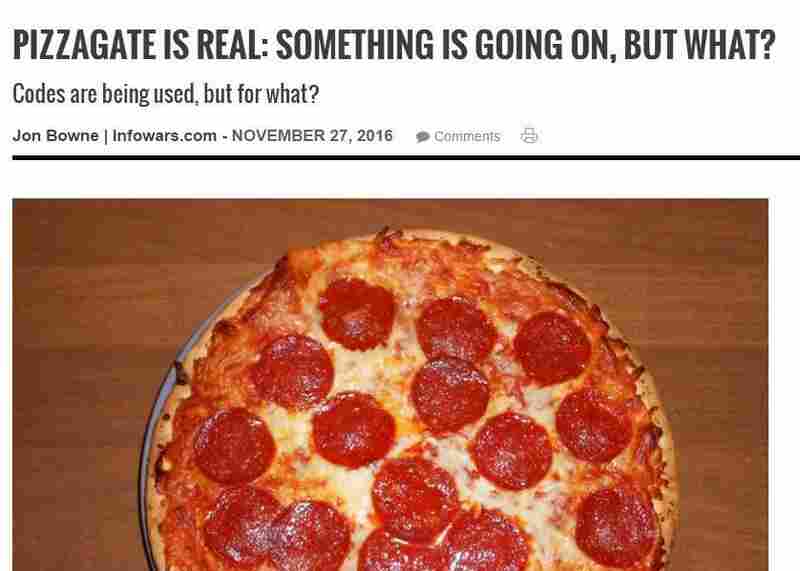 A screenshot of the since-removed page advancing misleading information about a Washington, D.C., pizzeria. Infowars.com/screenshot by NPR hide caption

Another video on the same site, which matches a video described in the criminal complaint against Welch, is still active.

Another potential source of the type of misleading information cited by Welch was shut down not by the people posting the information but by the website on which it was hosted.

"We don't want witchhunts on our site," reddit's administrators wrote.

This week, a member of President-elect Donald Trump's transition team also deleted a tweet linking to a different fake story alleging that officials in the Democratic Party were connected to child sex abuse. 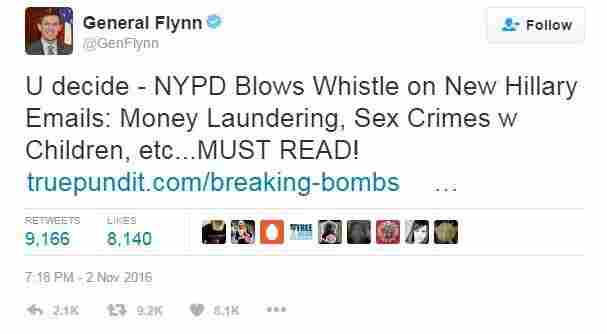 Flynn then linked to a story on a website called truepundit.com that included unfounded accusations about the Democratic presidential nominee.

In November, Trump chose Flynn to serve as national security adviser in the incoming administration, as we reported.

The tweet remained visible on Flynn's Twitter account until at least this Monday, according to an Internet archive that stores copies of webpages. More than 9,000 people shared it.

By early Tuesday morning, the tweet had been deleted. It no longer appears on Flynn's twitter profile. NPR reached out to the president-elect's transition team, but did not hear back.