Accessibility links
Zsa Zsa Gabor Dies At 99: A Remembrance Of Her Camp, Glitz And Glam : The Two-Way The screen siren was probably most responsible for the notion of "famous for being famous." NPR's Neda Ulaby looks back at Gabor's contributions to pop culture and to our ideas about celebrity.

Zsa Zsa Gabor — the woman who probably inspired the term "famous for being famous" — died on Sunday, according to multiple media outlets. She was 99 years old, just two months shy of her 100th birthday. 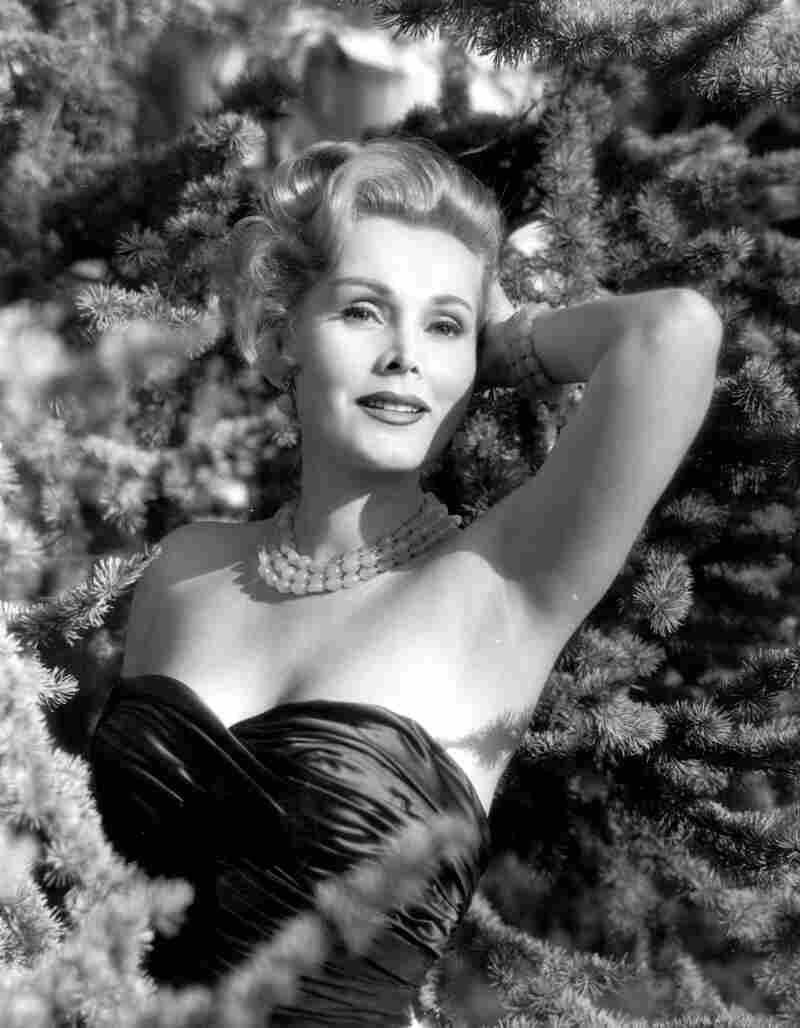 "Zsa Zsa Gabor has died. I am pleased that she is finally out of her misery. For the past five years, Zsa Zsa has suffered chronic dementia, locked away in her mansion laying in a hospital bed being fed through tubes in her naval, not able to speak, see, write or hear. Nor knowing who she was or how famous she was. Being her publicist during the famous Beverly Hills cop [slapping] incident and providing those services for her daughter Francesca Hilton were highlights of my PR career.

"Zsa Zsa did not suffer fools well. That fact, along with her European post-war survival techniques inspired by her mother, Zsa Zsa Gabor was one tough cookie. Her beautiful lips and mouth would be her worst enemy when and if she turned on the verbal machine gun. Most of her problems resulted from that beautiful mouth.

"Despite the people who came into her life these past years, and the controversy they have caused with their behavior, many that are still around who worked with her, knew her, from the 1950s, 1960s, 1970s, 1980's know that Zsa Zsa Gabor is an American icon and the key link in the Gabor/Hilton Dynasty which will still exist for generations to come.

"Zsa Zsa and her daughter Francesca Hilton are together again. Always remembered."

Buxom and blond, vampy and campy, the Hungarian-born screen siren mainly contributed to cultural touchstones such as The Love Boat, The Naked Gun 2 1/2 and Hollywood Squares — where she answered (or, more accurately, couldn't answer) questions about Cheez Whiz. 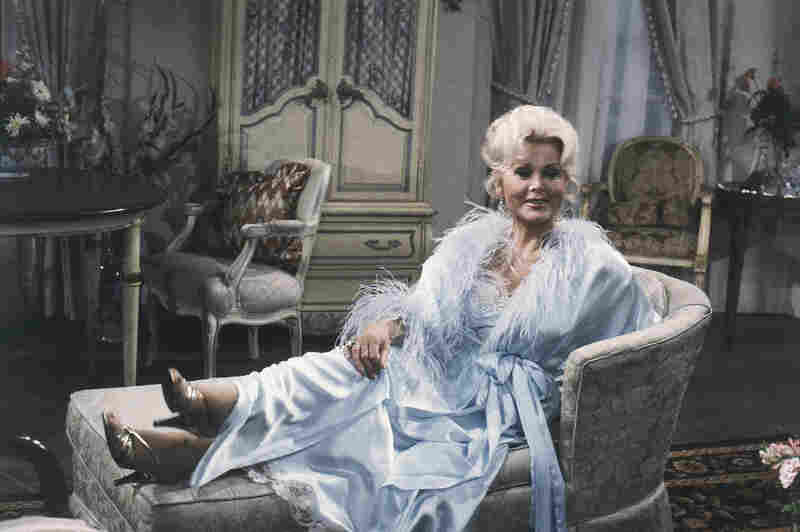 Zsa Zsa Gabor strikes a glamorous pose during a rehearsal for CBS's As The World Turns in 1981. Mary Lederhandler/AP hide caption 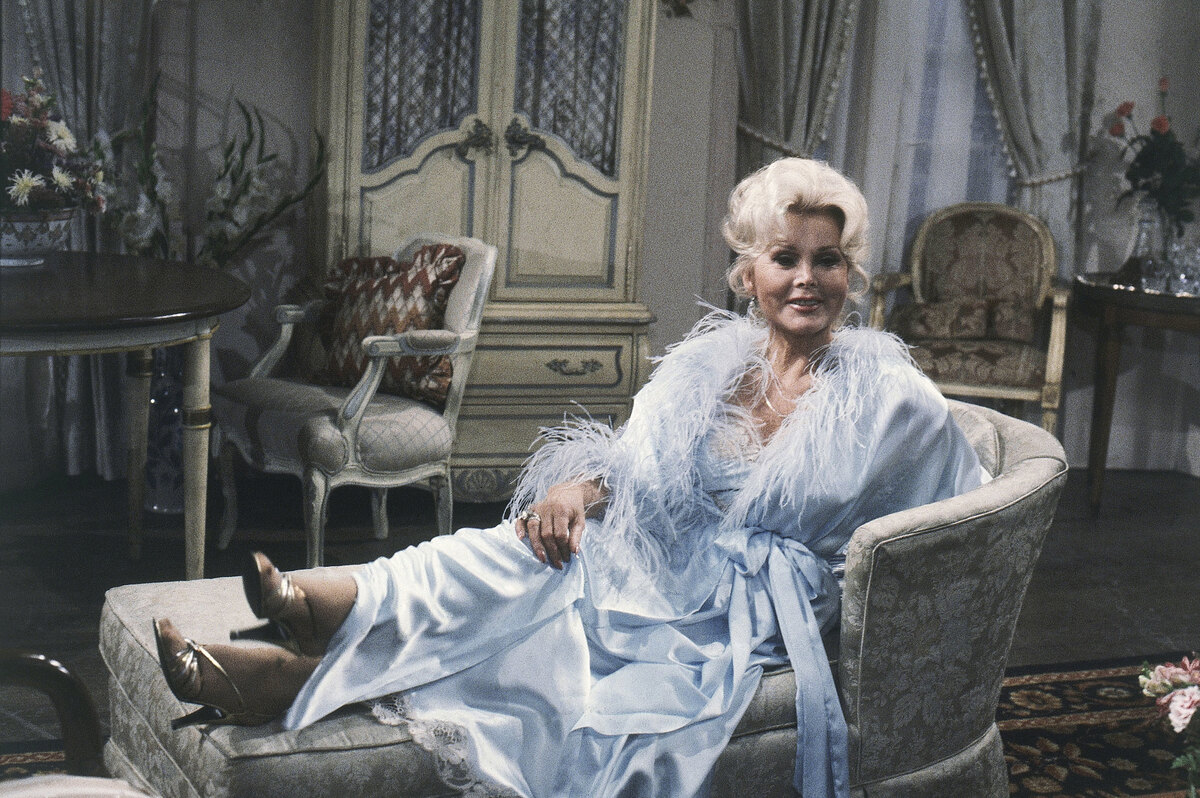 Zsa Zsa Gabor strikes a glamorous pose during a rehearsal for CBS's As The World Turns in 1981.

But it would be a grave mistake to trivialize Gabor's achievements.

"She is one of the most important figures of the late 20th century in terms of thinking about celebrity, thinking about women," says Kirsten Pullen, a professor at Texas A&M University.

Pullen is not joking. As far back as the 1950s, when women were expected to be decorous, Gabor sought and got constant press for her juicy hookups, her fabulous bling and her public antics. She could dominate a newsreel about a movie premiere — for a movie she wasn't even in — just by showing up in a diaphanous gown. She was arguably the prototype for today's Kim Kardashians and Paris Hiltons.

(In fact, Gabor and Hilton had family ties: Gabor was once married to Conrad Hilton, who is Paris Hilton's great-grandfather.)

"You can't make this stuff up," Pullen says wryly. "Whether or not we think it's great to be famous for being famous, she is the one who really set the template for that."

Gabor followed her sister Eva from Hungary to Hollywood in the 1940s. Zsa Zsa scored some small movie parts from big movie directors — Orson Welles and John Huston among them — and was also featured in some movies probably best forgotten, such as Queen of Outer Space.

But if she wasn't known for her skilled acting, dancing or singing, Gabor was an irrepressible performer — and she excelled at playing herself, once endless rounds of Hollywood gossip and publicity made her own persona larger than any character.

She had charm, which made her jokes about marrying for money rather than romance more palatable right when women were starting to demand more financial control. Her oft-stated fondness for sex dented traditional expectations of passive femininity, Pullen says: "She paved the way for the sexual revolution."

And when Gabor slapped a policeman who pulled her over in 1989, she parlayed the incident into a full-blown comeback, without any apparent help from mangers or publicists. The incident put her back on the talk show circuit, where she chattered merrily about the challenges of maintaining a beauty regimen in the slammer.

Even as an older woman, Gabor tended her image as the glamorous starlet who married something like 10 times. She threw out lines like, "I am a marvelous housekeeper. Every time I leave a man, I keep his house."

But she also, ironically enough, had this to say about Paris Hilton: "I think she's rather silly. She does too many things for publicity."