Accessibility links
Montreal's Tall, Scrawny Christmas Tree Evoking Charlie Brown Comparisons : The Two-Way Montreal wanted a tree that would rival the Rockefeller Center Christmas Tree in New York City. So it picked one with plenty of height — but residents are underwhelmed by its other attributes. 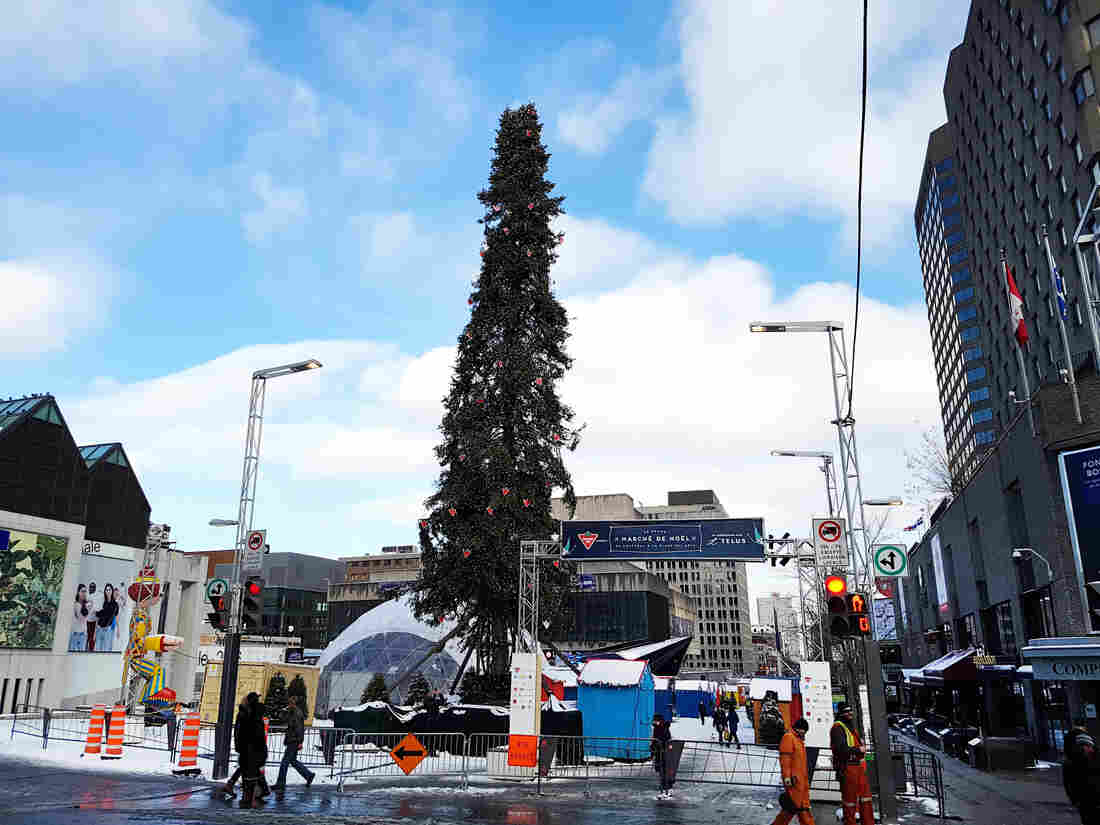 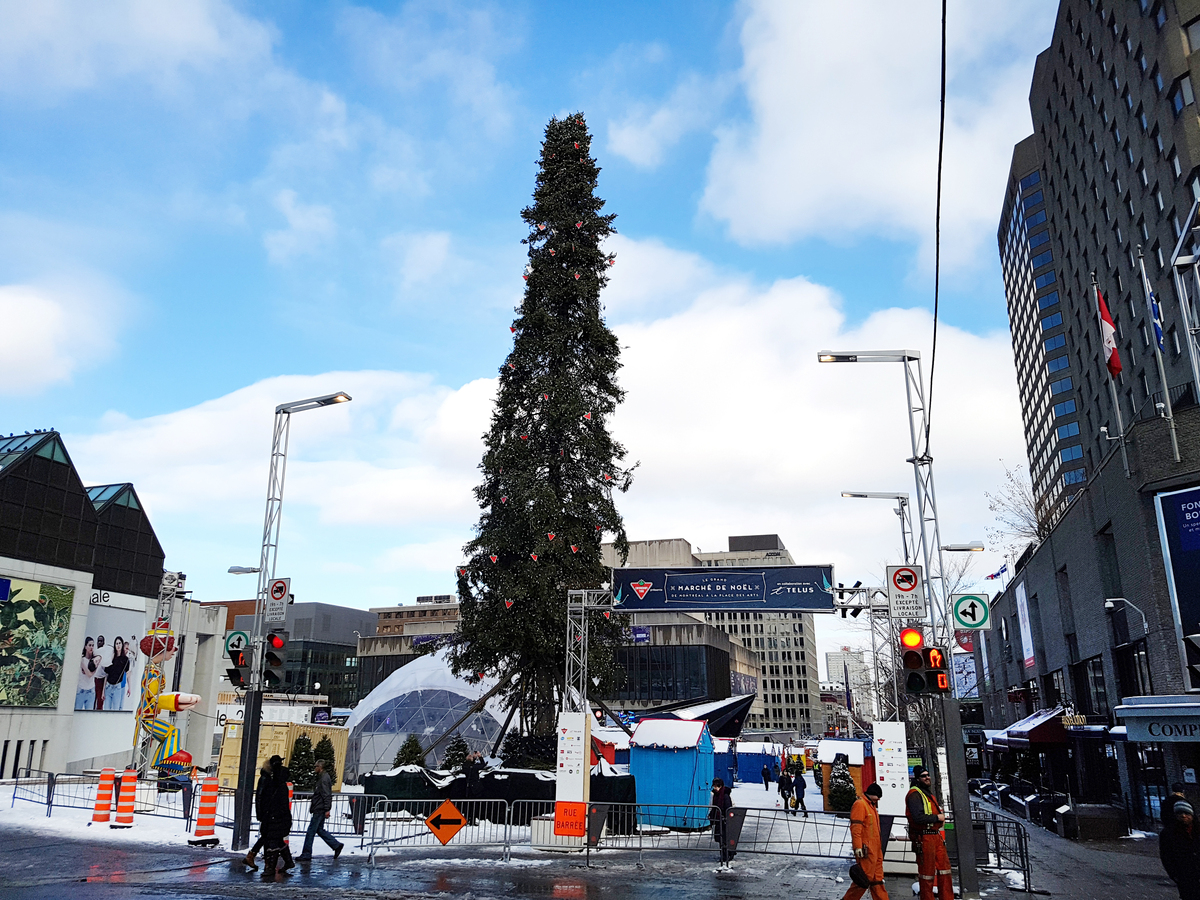 What they got is more than 85 feet tall, so it's got that going for it, which is nice. 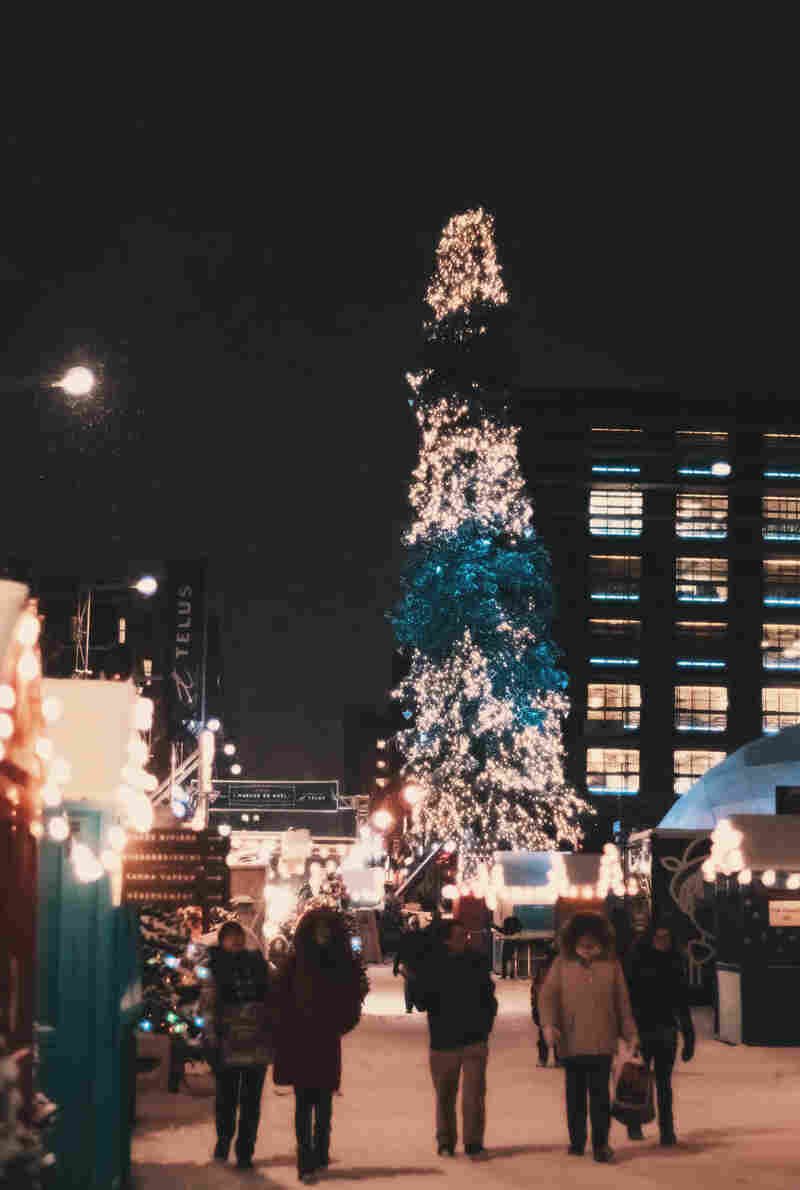 Is it better when it's lit up? You be the judge. Courtesy of Stephane Venne hide caption

But otherwise ... well, it's been described as "skinny and lopsided."

As "a pretty sad excuse for a Christmas tree."

As "scraggly," "battered" and "dishevelled-looking."

As — let's not beat around the bush here — ugly.

It's even been voted the ugliest Christmas tree in Canada.

Many Montreal residents have protested that the poor balsam fir doesn't even have a star at the top.

There are a few defenders, of course, like the Montrealer who told the CBC that "it doesn't have to be perfect."

Or the columnist at the Montreal Gazette who wrote, "I'm grateful to the lean and hungry-looking tree that has attracted so much scorn, because the controversy made me think about 'balsam.'

"The word turns out to have a strange and tangled story," he writes. (And it's true! It does. You should go read about it. It involves mummies, insanity and "blowing the Christmas pudding.")

It Just Needed A Little Love: An Ugly Spruce Ties A Town Together

We here at The Two-Way have a soft spot for ugly Christmas trees. You may recall that in late 2014, the town of Reading, Pa., selected a similarly unloved Christmas tree. That one was a spruce — a "nasty," "pathetic" and "ugly" spruce, according to the grinches.

But when the city decided to replace the sad conifer, the people of Reading changed their minds. They came to embrace the "underdog" tree, brightening it up with fresh decorations and treating it to a special reading of A Charlie Brown Christmas.

A #SadTree Lot: Your Photos Of The Charlie Browniest Trees

So maybe the good people of Montreal will discover a sliver of Christmastime love for their slim tree.

That same year, we asked you, our readers, to share photos of your own less-than-spectacular Christmas trees, with the caption #sadtree. Check out some highlights below — and feel free to send us more, if Montreal has you inspired.

throwback to the #sadtree of 2010...an icon in our family's christmas tradition. we drove up from florida to our grandparents' house in chicago on dec.23rd and decided at 5pm on the 24th that we wanted a real tree after all. my mother and i drove to the bustling local tree lot we had seen the day before, with high hopes and fresh excitement at the prospect of filling the house with the inviting scent of real evergreen and utilising my grandparents' ornament collection for the first time in years, to find that the lot was deserted...completely deserted..not a tree nor other living thing in sight.all that was left was a piece of forgotten tinsel blowing sadly in the wind. disappointment struck.we spoke no words. we pulled into the lot in silence to turn the car around when suddenly,through the gloaming of the winters evening we made out the shape of this "tree",tied to a fence post in the back corner with some twine. we knew what we had to do. we drove up to it, cut it free from the twine with the car key and shoved it in the trunk to bring it home, where it was welcomed, celebrated and decorated like a new tree member of the family, the best christmas tree ever, a true christmas legend... the end

We are shamelessly embarrassing our Pomeranian, Latte, and bringing out the "modern spirit" of Christmas! #sadtree pic.twitter.com/eH8UpFGoL5