Accessibility links
Video Of Woman's Arrest In Texas Sparks Anger And Internal Police Inquiry : The Two-Way What began as a dispute over littering rapidly escalated into a white police officer forcefully arresting a black woman and her two daughters in Fort Worth. 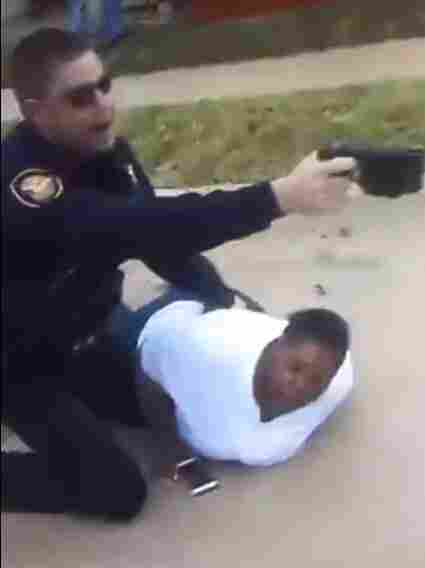 A screen grab from a video posted by Jacqueline Craig's niece shows an officer holding Craig on the ground while issuing commands. Police arrested Craig after she called to report a man had grabbed her son and accused him of littering. Porsha Craver/Facebook hide caption 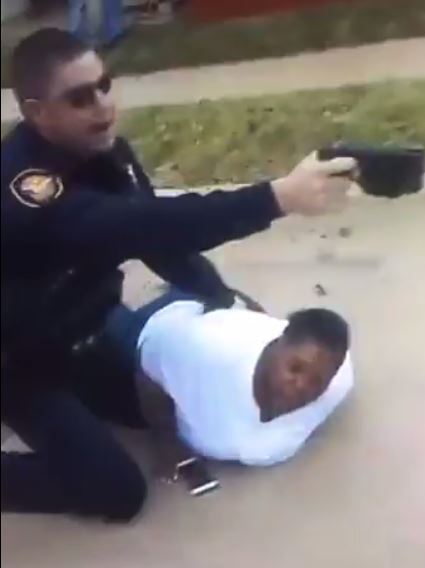 A screen grab from a video posted by Jacqueline Craig's niece shows an officer holding Craig on the ground while issuing commands. Police arrested Craig after she called to report a man had grabbed her son and accused him of littering.

What began as a dispute over littering rapidly escalated into the arrest of a black woman and her two daughters Wednesday in Fort Worth, Texas. The incident was captured on video and has sparked an internal affairs inquiry into the white police officer who forcefully arrested the women.

"The family's lawyer says racism is all over the incident," Christopher Connelly of member station KERA tells our Newscast unit. "In a statement, the department acknowledged that the video looks bad, but urged calm until an investigation is completed. Protesters called for the officer's dismissal."

The events unfolded in southwest Fort Worth, where Jacqueline Craig called police to say a man had grabbed and choked her 7-year-old son after accusing him of littering. But after an officer responded to the call, the two engaged in a heated argument as bystanders, including Craig's relatives, looked on.

In the nearly 6-minute video that's now been viewed some 2.5 million times on Facebook, the responding officer is seen questioning Craig, as she says the man should have spoken to her about her son. The video was posted by Porsha Craver, Craig's niece who used a smartphone to film a screen showing the original footage — and who offers her own comments about the police encounter.

The original video was streamed live by Craig's daughter, Brea Hymond, 19, the family's attorney says. She was arrested along with Craig; they were released Thursday afternoon, KERA reports. Craig's 15-year-old daughter was also arrested and released.

"The involved officer has been placed on restricted duty status by the Chief of Police" pending the outcome of an Internal Affairs investigation, the Fort Worth Police Department says. The department says its investigators began their inquiry only about an hour after Craver posted the video Wednesday night.

The police agency also says it expects its officers to treat members of the public with "trust, respect and courtesy."

Growing emotional as she spoke about her son, she said, "It made me feel less of a parent that I couldn't protect him when he needed it."

The incident drew a protest at the Tarrant County Courthouse last night; it also provoked at least one threat of violence, with KERA reporting that "Fort Worth police issued a 'safety alert' Thursday after a threat was posted on Facebook regarding the video of the incident."

The video includes outbursts of profanity, particularly toward the end; we'll summarize it here:

"Why don't you teach your son not to litter?" the officer asks.

"He can't prove to me that my son littered," Craig says. "But it doesn't matter if he did or didn't. It doesn't give him the right to put his hands on him."

From there, the situation rapidly deteriorates, as Craig soon tells the officer, "You just pissed me off, telling me what I teach my kids and what I don't."

"If you keep yelling at me, you're going to piss me off, I'm going to take you to jail," he tells Craig.

At that, a young woman, identified as one of Craig's daughters, tries to step between the two, putting her hands on her mother's arms — but the officer grapples with the younger woman and shoves her out of the way, prompting bystanders to shout, "Don't grab her!"

An instant later, Craig is on the ground, with the officer pointing his Taser at her back. He then waves the weapon at the crowd of bystanders, as the scene turns chaotic. On the video's timeline, only about 2 minutes has elapsed.

The officer handcuffs Craig and leaves her on the pavement; he then walks to her daughter who's sitting in the street, forces her face-down on the concrete, and handcuffs her as well.

With bystanders yelling and shouting at the officer, he gets both women on their feet and walks them to his marked vehicle.

"Everything you just did is on Live," a woman filming the events shouts at the police officer, referring to her live video stream.

After the officer gets the women in the car, he then turns his attention to the woman filming the video.

"OK, you're going to jail too," he tells her, as they struggle over her phone.

That's where the footage of the arrest ends; Craver posted the video then turns to the camera and says, "So, I just wanted y'all to see how the Fort Worth Police Department just treated my family, after calling them to help them for a racist man putting his hands on a 7-year-old, my 7-year-old little cousin who couldn't defend himself."

She says the police department "clearly isn't here for us."

Of the officer, she says, "He deserves to lose his job, and that is our goal."