Accessibility links
Carrie Fisher, Princess Leia of 'Star Wars,' Dies At 60 : The Two-Way She suffered a massive heart attack on a flight from London to Los Angeles last week. A spokeswoman for Fisher's daughter said the actress died Tuesday morning.

Carrie Fisher, the actress who became a pop culture icon for her performance as Princess Leia in Star Wars, has died at age 60.

Fisher had suffered a massive heart attack last week on a flight from London to Los Angeles. On Sunday, her family said she was in stable condition.

Fisher shot to fame at the age of 19, when she took on her instantly iconic role in Star Wars.

As Leia Organa, she seemed to be taking on the role of damsel in distress — appearing as a hologram begging for help. But she was no helpless heroine: Princess Leia was an indomitable, independent rebel leader.

The actress returns for the next installment, Episode VIII, which is set for release in December 2017. People magazine reports Fisher had already filmed scenes for the film, and The Los Angeles Times says shooting is completed — though what role Leia plays in the movie, like other elements of the film, is "tightly under wraps."

Fisher also appeared in Austin Powers, The Blues Brothers, Charlie's Angels and When Harry Met Sally..., among other films, as The Associated Press notes.

But it was her appearance in the original Star Wars series that cemented Fisher's status as a pop culture icon. Her legendary role came with instantly recognizable outfits: Those cinnamon-roll braids, that drapey white dress — and, of course, that famous gold bikini.

A few weeks ago, she spoke with NPR's Terry Gross about that uncomfortable-looking outfit, which she wore while Princess Leia was enslaved by Jabba the Hutt in Return of the Jedi.

"Nearly naked" was not her preferred aesthetic, she said.

"It wasn't my choice ... it made me very nervous. I had to sit very straight because I couldn't have lines on my sides, like little creases. No creases were allowed, so I had to sit very, very rigid straight.

"What redeems it is I get to kill him, which was so enjoyable. ... I sawed his neck off with that chain that I killed him with. I really relished that because I hated wearing that outfit and sitting there rigid straight, and I couldn't wait to kill him." 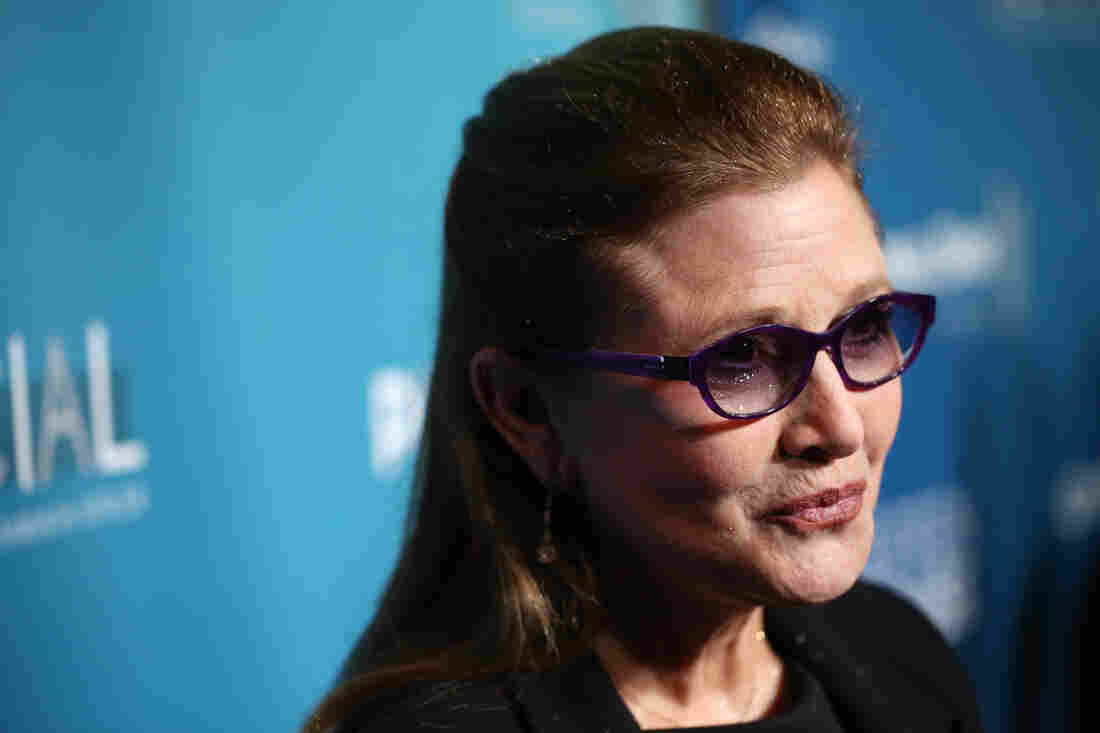 Carrie Fisher at the Backstage At The Geffen Gala in Los Angeles in March 2014. Matt Sayles/Invision for Geffen Playhouse/AP hide caption 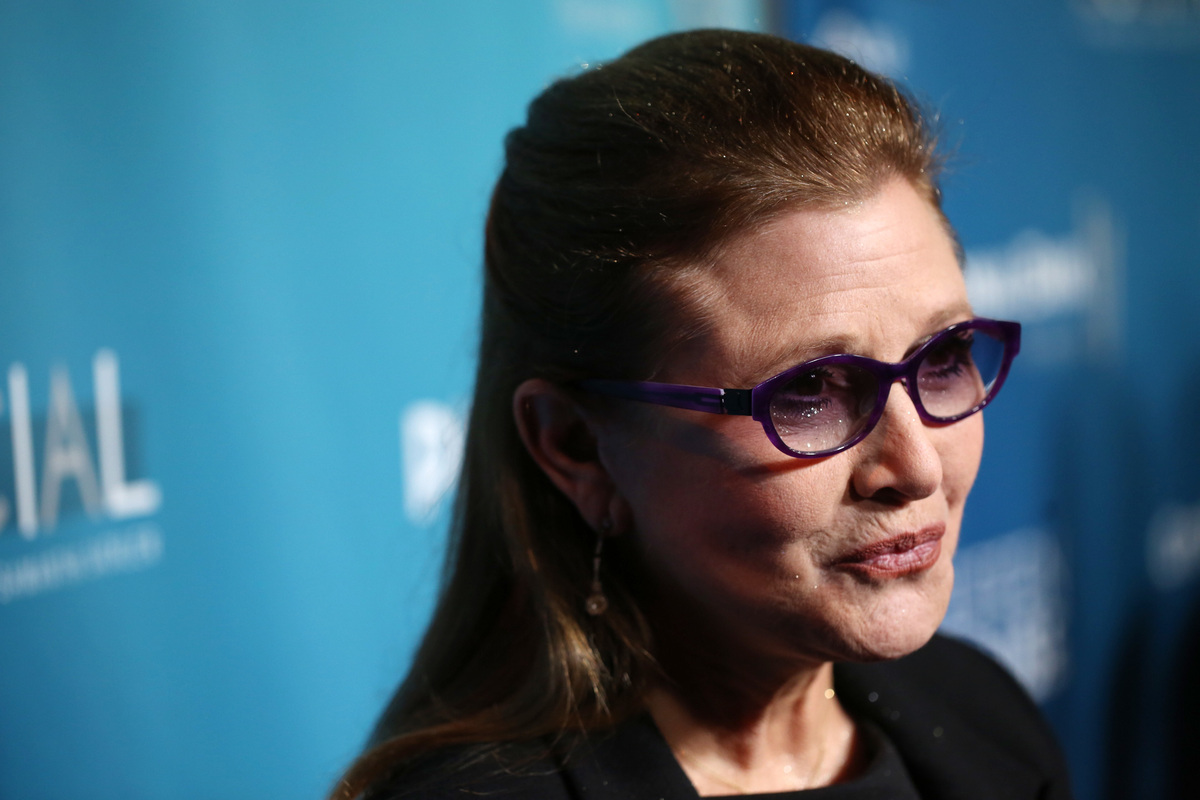 Carrie Fisher at the Backstage At The Geffen Gala in Los Angeles in March 2014.

In the popular imagination, Fisher was inextricably tied to that most famous role. But her life, of course, was much larger.

She was a writer of both memoirs and novels — her first book, the semi-autobiographical Postcards from the Edge, was a bit of both. It's about a Hollywood actress working to recover from addiction.

Fisher herself had battled both drug addiction and mental illness. "She said she smoked pot at age 13, used LSD by 21 and was first diagnosed as bipolar at age 24," the AP reports. "She was treated with electroconvulsive therapy and medication."

Her most recent book, Princess Diarist, is a memoir that includes Fisher's diary from back when she was shooting the first Star Wars film. In it, she reveals that she and Harrison Ford had an affair. She was 19; he was in his 30s and married.

She was isolated during the filming of the movie — surrounded by nearly all men, with no one to confide in. And, she revealed, she was painfully insecure about her body.

But she can laugh about it now, like when she told Gross she used to see herself as "a giant, fat face like a sanddab with features" — and chuckled.

Carrie Fisher shared her approach to life in her one-woman show Wishful Drinking, which was later turned into a book.

"Let's say something happens and from a certain slant maybe it's tragic, even a little bit shocking," she said. "Then time passes, and you go to the funny slant, and now that very same thing can no longer do you any harm."

As NPR's Andrew Limbong reports, Fisher lived by that wisdom.

"She was born in 1956 to two huge stars — the singer Eddie Fisher and award winning actress Debbie Reynolds," Andrew says. "From a certain slant being born to two famous people — who ended up famously divorcing — can be tragic. Time passes, and it has to be funny."

In Memoriam: Musicians Who Died In 2016

She found the humor in her parents' marriage and their divorce, and made jokes out of her mother's later marriages — and her own love life.

She saw the lighter side of the way men would, unprompted, tell her how prominent a role she played in their fantasies (teenage or otherwise).

Out of her personal struggles with drugs, alcohol and mental illness, Fisher built wry jokes. She also found greater understanding of herself — and the company of others.

"It creates community when you talk about private things and you can find other people that have the same things," Fisher told Terry Gross. "Otherwise I felt very lonely with some of the issues that I had. ... When I shared about it, I found that others had it, too."

And while she once had a love-hate relationship with the princess who made her famous, Fisher eventually settled on the side of love.

"The downside is the hair and some of the outfits," she told NPR. "But I like Princess Leia.