Accessibility links
ISIS Claims Responsibility In Turkish Nightclub Attack; U.S. Man Among Wounded : The Two-Way In a statement, the Islamic State said it was responsible for the shooting attack that killed at least 39 people on Sunday. The State Department confirms a Delaware businessman is among the wounded. 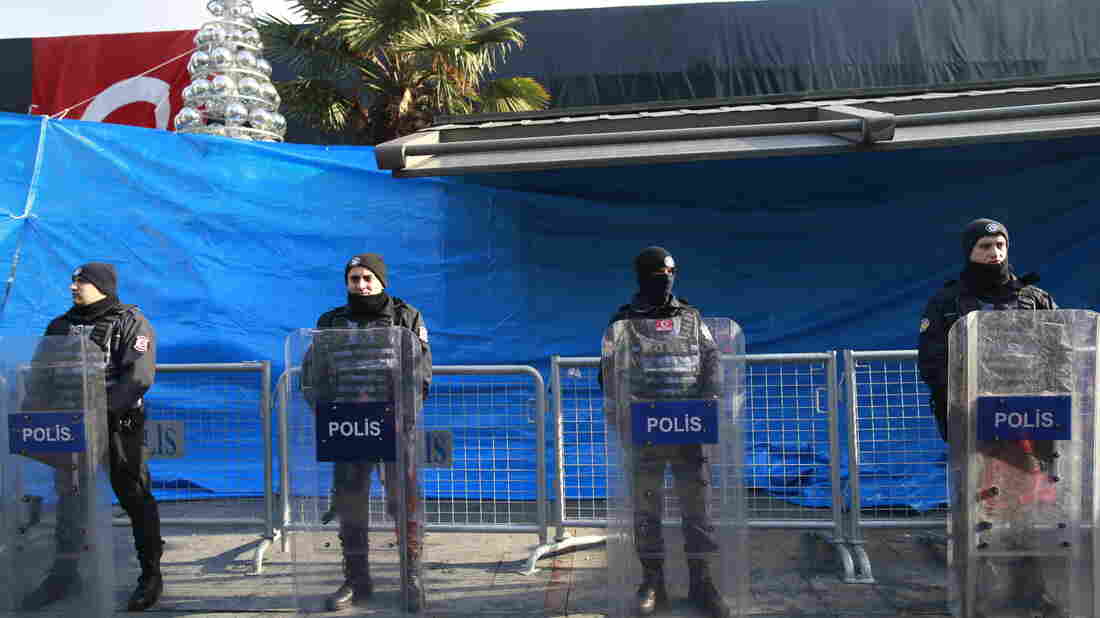 Turkish police officers stand guard outside an Istanbul nightclub that was attacked by a gunman on Sunday. Turkey's state-run news agency says that nearly two-thirds of the 39 people killed were foreign nationals. Emrah Gurel/AP hide caption 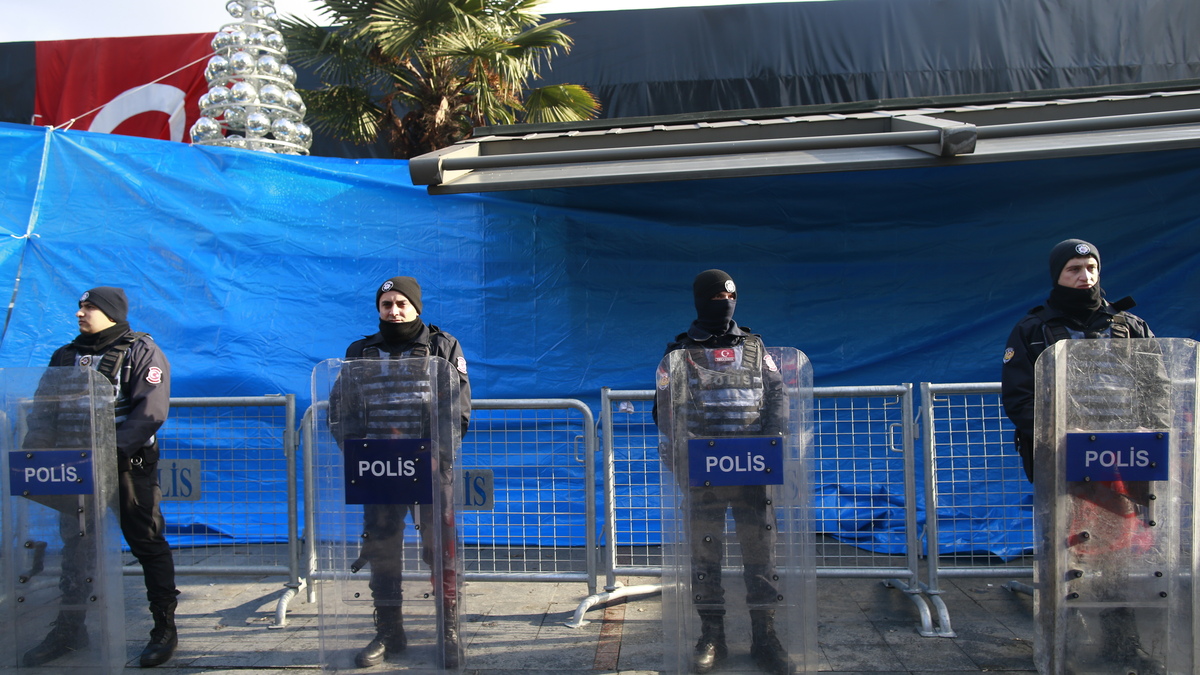 Turkish police officers stand guard outside an Istanbul nightclub that was attacked by a gunman on Sunday. Turkey's state-run news agency says that nearly two-thirds of the 39 people killed were foreign nationals.

The Islamic State issued a statement on Monday saying it was responsible for the attack at a New Year's Eve celebration at a nightclub in Istanbul, Turkey, in which at least 39 people were killed.

"In continuation of the blessed operations that Islamic State is conducting against the protector of the cross, Turkey, a heroic soldier of the caliphate struck one of the most famous nightclubs where the Christians celebrate their apostate holiday."

On Sunday, Peter reported that Turkish officials identified several possible culprits for the shooting, including the Islamic State, Kurdish militants or far-left groups.

Clubgoers from Jordan, Saudi Arabia, Kuwait, Iraq, Lebanon and France are thought to have been killed. 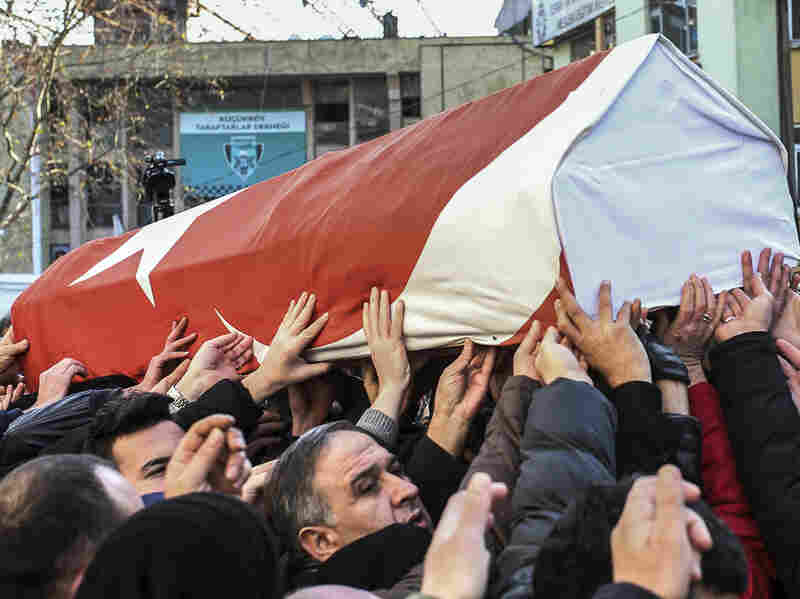 Family members and friends carry a coffin containing the remains of Ayhan Akin, one of the nightclub shooting victims in Sunday's attack in Istanbul, Turkey. AP hide caption 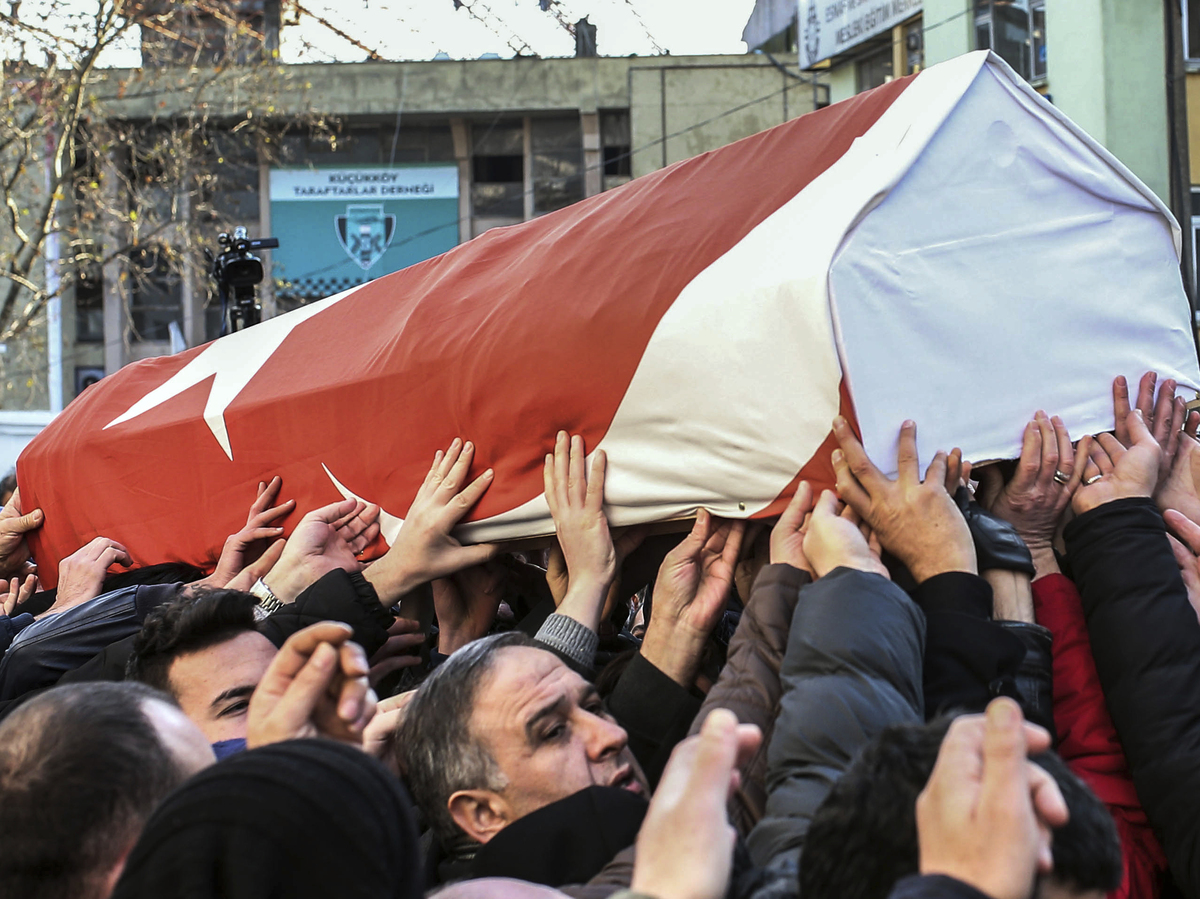 Family members and friends carry a coffin containing the remains of Ayhan Akin, one of the nightclub shooting victims in Sunday's attack in Istanbul, Turkey.

Funerals for some of the Turkish victims began on Sunday.

A 19-year-old Arab-Israeli woman was killed in the attack. Peter reports that her father warned her not to go but she insisted — wanting to be with her friends.

Nearly 70 people were wounded in the attack, among them a 35-year-old businessman from Delaware, according to the State Department.

WCAU-TV reports that Michael Raak of South Philadelphia says his brother, William Jacob Raak, called on New Year's Eve to say he had been shot in the leg.

The search for the attacker, who has not yet been identified, is still underway, says Interior Minister Suleyman Soylu. Police believe he carried out the attack alone.

Hurriyet and Karar newspaper reports Monday cited unnamed security officials saying that authorities have determined that the gunman who killed 39 people comes from a Central Asian nation and is believed to be either from Uzbekistan or Kyrgyzstan.

Police had also established similarities with the high-casualty attack at Ataturk Airport in June and was investigating whether the same IS cell carried out both attacks.

NPR's Peter Kenyon reported on Weekend All Things Considered that Turkey's prime minister says the attacker left his weapon at the scene and fled in the chaotic aftermath.

At Reina, one of Istanbul's most popular nightclubs, it's believed some 500 to 600 revelers were celebrating the start of the new year.

Reuters reports that the attacker shot at a police officer and at civilians before entering the nightclub. Many inside were said to have jumped into the neighboring Bosphorus waterway in an attempt to save themselves from the gunfire.

The U.N. Security Council condemned the attack in a statement, calling it a "heinous and barbaric terrorist attack."

Both the White House and State Department condemned the attack.

The assault on the nightclub comes just two weeks after Russian ambassador Andrei Karlov was shot dead by off-duty Turkish policeman Mevlut Mert Altintas and three weeks after a bomb attack killed 44 people at a football stadium in Istanbul. A Kurdish militant group claimed responsibility for the latter.

Turkey, which is part of the U.S.-led coalition against Islamic State, has faced numerous security threats. In all, there were at least six attacks in Turkey in 2016, claiming more than 200 lives.