Accessibility links
'Bathroom Bill' Fight Brewing In Texas : The Two-Way Texas Republicans are divided over the need for — and political wisdom of — a bill similar to one that caused political turmoil in North Carolina. 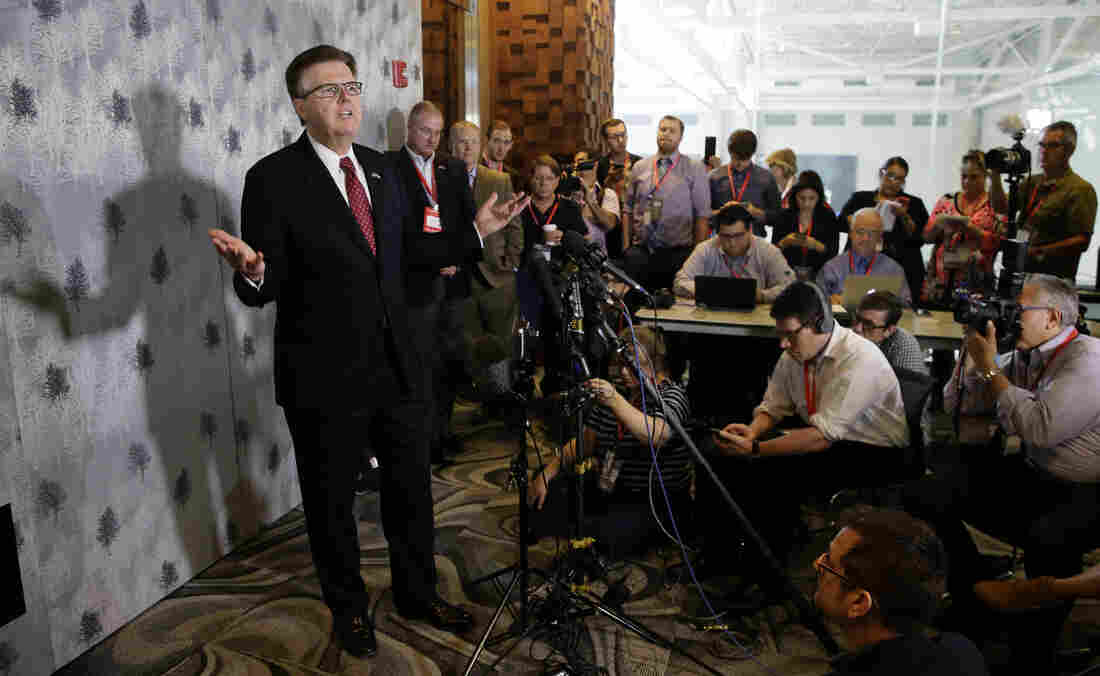 Texas Lt. Gov. Dan Patrick speaks during a news conference at the Texas Republican Convention on May 13, 2016, in Dallas. There is a "bathroom bill" proposal in the Texas legislature that could require transgender Texans to use the restroom which corresponds to the gender on their birth certificate. LM Otero/AP hide caption 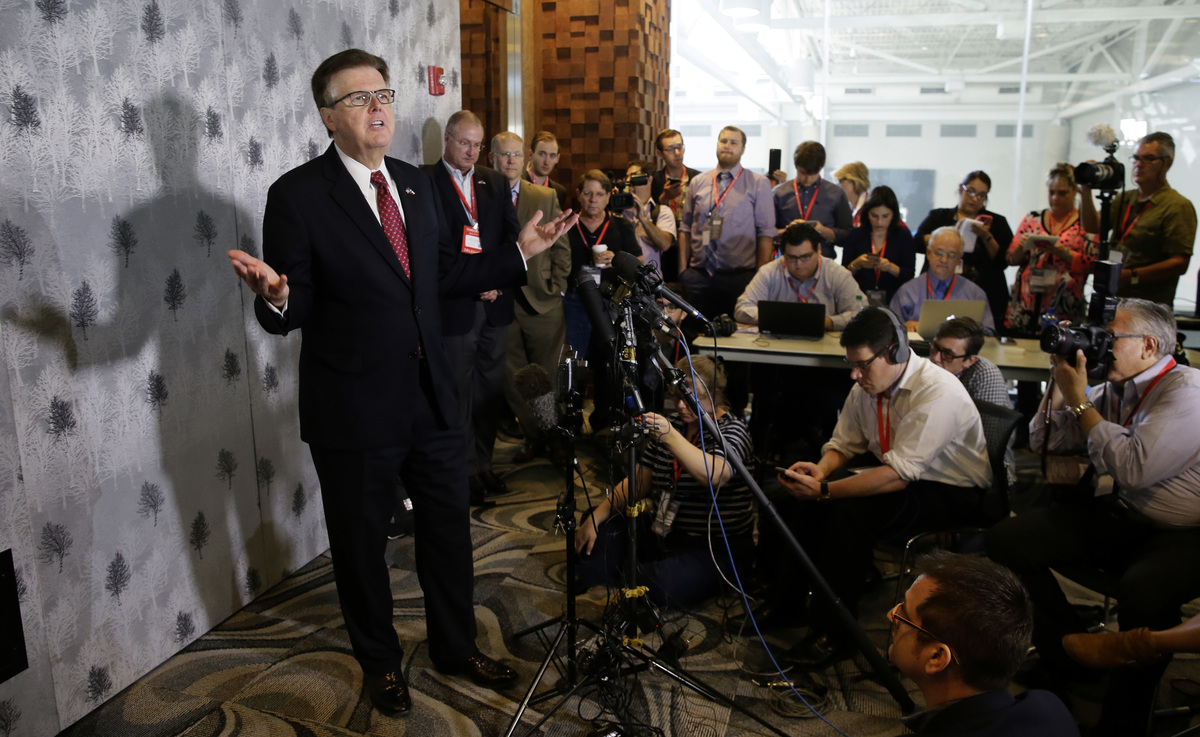 Texas Lt. Gov. Dan Patrick speaks during a news conference at the Texas Republican Convention on May 13, 2016, in Dallas. There is a "bathroom bill" proposal in the Texas legislature that could require transgender Texans to use the restroom which corresponds to the gender on their birth certificate.

Texas could soon follow in the footsteps of Indiana and North Carolina and pass its own "bathroom bill" in the upcoming legislative session. Lt. Gov. Dan Patrick has made passage of such a bill, which could require transgender Texans to use the restroom which corresponds to the gender on their birth certificate, a priority.

The proposal threatens to split the Texas Republican Party, which controls all three branches of government in Austin. Proponents include the lieutenant governor and the Senate he leads, while the Texas House of Representatives is more sympathetic to the state's business community. The politically powerful chamber of commerce and the Texas Association of Business both strongly oppose any bathroom bill.

The NBA pulled its All-Star Game out of North Carolina, the NCAA moved March Madness regional games out of the state, and PayPal and Deutsche Bank suspended planned expansions there. Forbes estimated that North Carolina lost more than $600 million in the six months after Gov. Pat McCrory signed the legislation into a law. McCrory was subsequently defeated in his bid for re-election in November by Democrat Roy Cooper, who made the bathroom bill a cornerstone of his campaign.

None of these economic and political ramifications have deterred the Texas lieutenant governor. In fact, when the North Carolina legislature failed an attempt to reverse itself and pass legislation that would have nullified its bathroom bill just before Christmas, Patrick sent a note applauding the collapse of the effort.

"Legislation to protect women's privacy and business is essential to assure that sexual predators ... will not be able to freely enter women's restrooms, locker rooms or showers ... " Patrick's note said.

However, many of the Texas GOP's most lucrative donors have indicated they're going to the mat to stop bathroom legislation from passing in Texas. The Texas Association of Business held a press conference last month to announce results of a study, commissioned by the TAB and conducted by researchers at St. Edwards University in Austin, which estimated a Lone Star bathroom bill could cost the state upwards of $8 billion in economic impact and 100,000 jobs.

"The message from the Texas business community is loud and clear," Chris Wallace, president of the TAB, said in front of the Texas Capitol. "Protecting Texas from billions of dollars in losses is simple: Don't pass unnecessary laws that discriminate against Texans and our visitors."

While Texas's lieutenant governor is hot for a bathroom bill, his counterpart in the Texas House, Speaker Joe Strauss, is not "This isn't the most urgent concern of mine," Strauss said.

Strauss is expected to be the business community's political backstop, and he's got the clout in the House to ensure that any bathroom legislation languishes and dies in committee. Not only would that please many influential donors, it would spare Republican House members from having to make a politically tricky vote.

And where is Texas Republican Gov. Greg Abbott on the subject? He's currently sitting atop the fence. Abbott says a wait-and-see approach is prudent until an actual bill is produced and the details — and political and economic ramifications — can be carefully scrutinized.