Accessibility links
'Comfort Woman' Statue Sparks Diplomatic Row Between Japan And South Korea : The Two-Way The statue in front of the Japanese Consulate, commemorating the plight of Korean women forced by the Japanese to work as sex slaves during World War II, has prompted Japan to withdraw its ambassador. 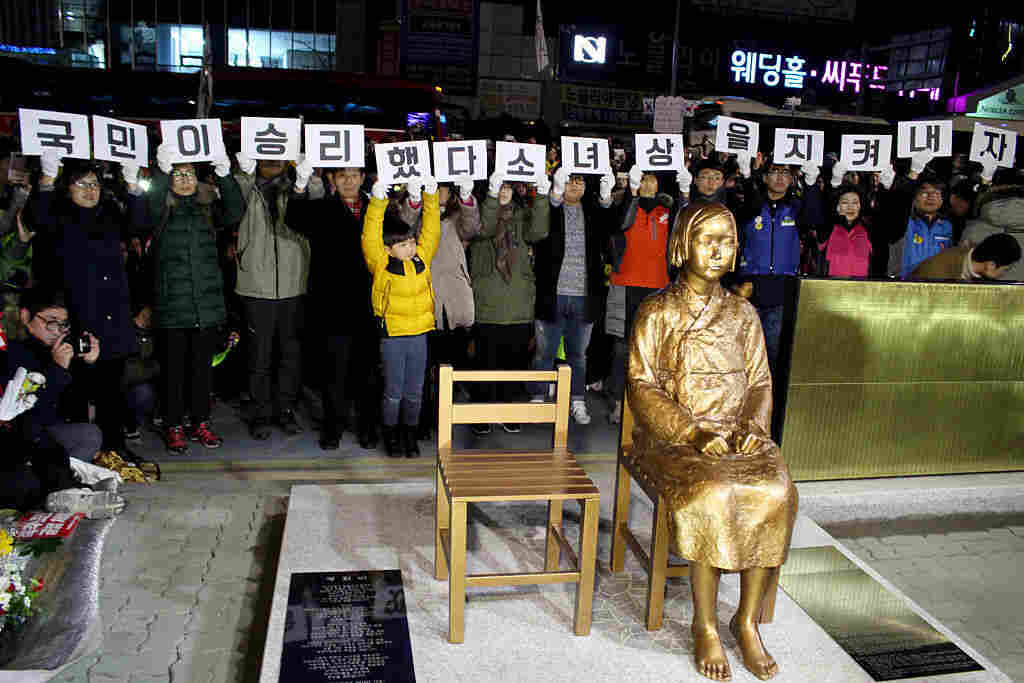 A statue of a girl symbolizing Korean "comfort women" is unveiled last week during a ceremony in front of the Japanese Consulate in Busan, South Korea. The Asahi Shimbun/Getty Images hide caption 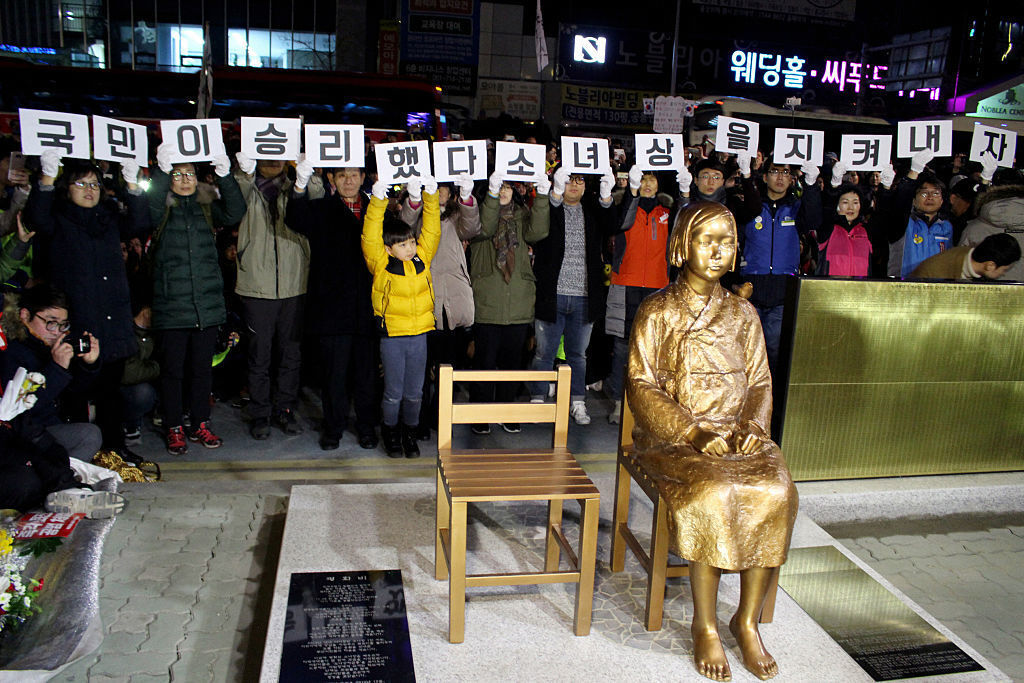 A statue of a girl symbolizing Korean "comfort women" is unveiled last week during a ceremony in front of the Japanese Consulate in Busan, South Korea.

A golden statue commemorating the plight of "comfort women" — a euphemism for the Korean women and girls forced by the Japanese to work as sex slaves in front-line brothels during World War II — has caused a diplomatic row between Japan and South Korea.

At the end of December, activists placed the golden statue of a young woman sitting in a chair in front of the Japanese Consulate in the southern city of Busan, South Korea.

Local authorities initially removed the statue, citing a lack of permits, The Korea Herald reported. But after public outcry, authorities allowed the statue to be replaced and the district mayor held a press conference to apologize.

Now, Japan is taking countermeasures. Speaking at a news conference Friday, Japan's chief Cabinet secretary, Yoshihide Suga, announced that the country is withdrawing both its ambassador to South Korea and the consul general at Busan. Suga also said Japan is pulling out of some high-profile economic talks, according to state broadcaster NHK.

Calling the situation "extremely regrettable," Suga said the statue is a break with the landmark deal in 2015 between the two countries over comfort women.

That deal was billed "final and irreversible," ostensibly smoothing over the persistent source of strain between the two countries, as we reported. It "included an apology from Japanese Prime Minister Shinzo Abe and a billion yen (roughly $8.3 million) fund to support the 46 surviving Korean women."

But some activists spoke out against the deal, as the BBC reported: "Critics say it was reached without consultation with victims, did not contain Japan's acknowledgement of legal responsibility, and did not provide direct compensation to the victims."

Suga also accused South Korea of violating "the Vienna Convention on Diplomatic Relations, which requires host countries to protect diplomatic missions from the impairment of their dignity," NHK reported.

Korea's finance ministry said it "regrets" that Japan suspended economic talks, including those focused on a potential currency swap deal, the Korea Herald reported. "It is desirable that the two countries continue bilateral economic and financial cooperation regardless of political and diplomatic relations," the ministry added.

The Associated Press reported that another statue by the same artist has stood in front of Japan's embassy in Seoul since 2011, prior to the agreement.

And the BBC says that "another 37 are thought to exist in South Korea, while in Australia a similar statue has sparked a row between Korean and Japanese community groups."