Accessibility links
Trump Denies Allegations In Unverified Report On Secret Ties, Collusion With Russia : The Two-Way Intelligence officials recently briefed both Obama and Trump about the unconfirmed reports. U.S. intelligence agencies have said Russia engaged in an extensive hacking effort during the 2016 election. 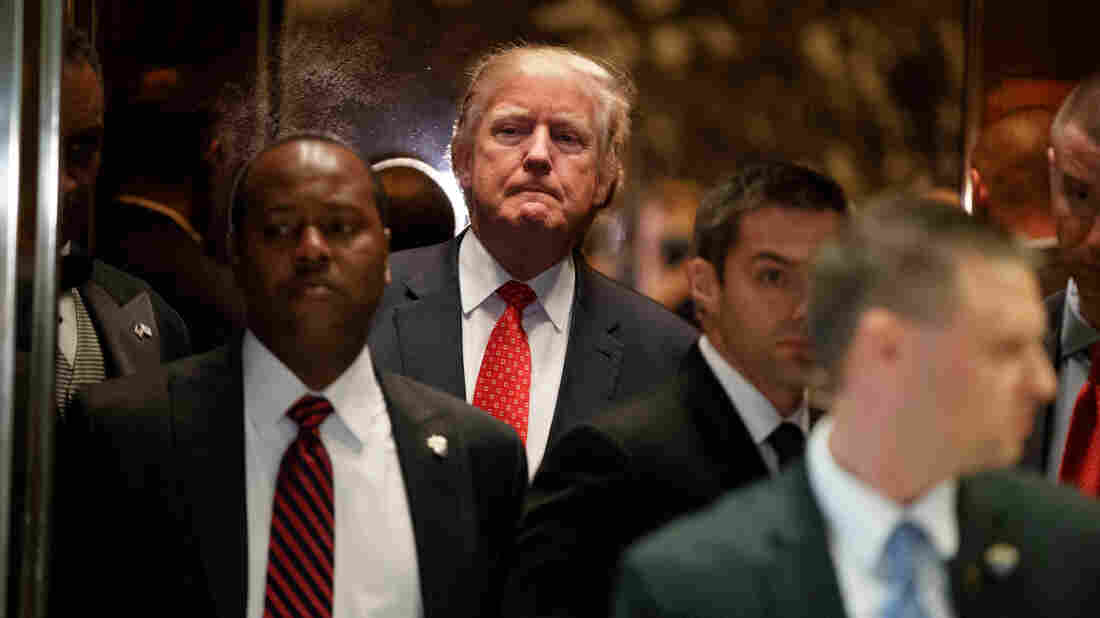 President-elect Donald Trump gets on an elevator Monday after speaking with reporters at Trump Tower in New York. Evan Vucci/AP hide caption 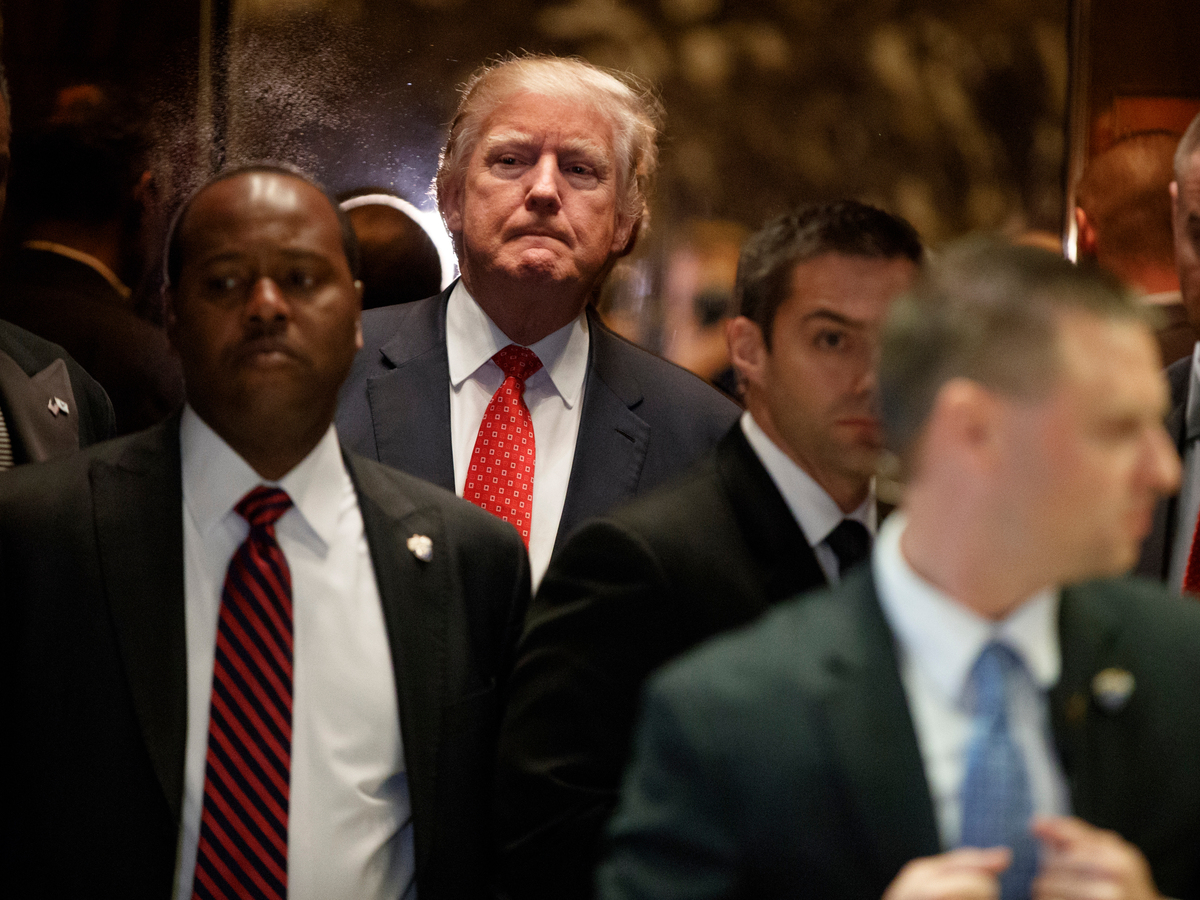 President-elect Donald Trump gets on an elevator Monday after speaking with reporters at Trump Tower in New York.

Top U.S. intelligence officials have briefed leaders in Washington about an explosive — but unverified — document that alleges collusion between Russia and President-elect Donald Trump, NPR has learned.

The brief, which NPR has seen but not independently verified, was given by Senate Armed Services Committee Chairman John McCain to FBI Director James Comey on Dec. 9. Details from it have been part of presentations by Comey and other intelligence leaders to Trump, President Obama and key leaders in Congress.

On Tuesday night, Trump and his attorney named in the report separately characterized the document as untrue. Without mentioning the report directly, Trump tweeted, "FAKE NEWS - A TOTAL POLITICAL WITCH HUNT!"

Wednesday, a Kremlin spokesman said the document was an "absolute fabrication." Presidential spokesman Dmitry Peskov said Russia had no compromising material on President-elect Donald Trump and that the document was a hoax intended to further damage U.S.-Russian relations.

Trump has scheduled a news conference for Wednesday — his first since one in July in which he quipped that Russia should hack materials related to his Democratic opponent, Hillary Clinton. The alleged intelligence document appears likely to dominate the upcoming session.

NPR is not detailing the contents of the brief because it remains unverified, but it describes a concerted effort by Russian President Vladimir Putin to cultivate a relationship with Trump and his camp. The document, which describes information provided by Russian government and other sources, details behavior by Trump that could leave him open to blackmail, as well as alleged secret meetings between Trump aides and Russian officials called to discuss the campaign against Clinton and potential new business relationships.

Obama told NBC News on Tuesday in an interview ahead of his farewell address that he hadn't seen the news reports and wouldn't comment on classified information. He reminded Lester Holt that he ordered the investigation released Friday of Russia's meddling in the presidential election and that the U.S. needed to continue strengthening its cyber-defenses.

At Odds With GOP Over Hacking, Trump Splits With Precedent

Members of Trump's camp issued their own denials separately from Trump.

"Once again these reports have no documentation," Trump confidant Roger Stone told NPR. "So far we have 'assessments' and 'briefings.' The special report prepared for Trump even noted that no evidence was included and that 'such documents are so top secret they must remain confidential.' "

Attorney Michael Cohen, who is a key figure in the allegations detailed in the report, denied to The Atlantic on Tuesday evening that he had made a trip to the Czech Republic that it describes.

"I'm telling you emphatically that I've not been to Prague, I've never been to Czech, I've not been to Russia," as reporter Rosie Gray quoted him on Twitter. Cohen posted a photo of his passport on his own Twitter account with the hashtag "#FakeNews."

The timing of the appearance of the dossier is significant — following a Senate Intelligence Committee hearing Tuesday about Russia's campaign to disrupt the 2016 presidential election and ahead of Trump's planned news conference. Democrats on Tuesday urged the FBI to reveal whether it is conducting any investigation into the Trump camp's connections to Russia, but Comey rebuffed them.

The dossier, which originated with a former British intelligence officer, does not contain the standard caveats or guidance about levels of "confidence" that are common in U.S. intelligence community documents. It brought another twist in the sometimes surreal story about Trump's historic political success. And it followed a hearing in which senators and intelligence leaders described the dangers of foreign mischief in the political systems of the U.S. and its allies. The Trump-Kremlin dossier could be a quintessential example.

If it's genuine, it tops what Director of National Intelligence James Clapper and other top intelligence bosses called an unprecedented spike in Russian meddling inside the U.S. If it's phony, or parts of it are fabricated, it's yet another turn in the hall of mirrors in which American voters have found themselves since Trump exploded onto the political scene, and debunking it could vindicate repeated denials by Trump and his aides that they have had improper relationships with Moscow.

Trump's former campaign manager, Paul Manafort, was forced to resign after information became public about his ties to pro-Kremlin leaders in Ukraine, which Putin invaded in 2014. Russian Foreign Ministry officials boasted in the press about their contacts with Trump's camp.

Manafort, for his part, denied the allegations.

"I have never had any ties to Russia or Putin," Manafort told NPR in a text message. "The references to me regarding speaking to [former Trump foreign policy adviser] Carter Page and Michael Cohen are totally wrong and not true."

Putin sent Trump a telegram after his election congratulating him on his win and reciprocating the overtures he had made about healing the relationship between the two nations.