Accessibility links
European Leaders Worried By Trump's Comments On NATO, EU : The Two-Way European leaders are concerned after U.S. President-elect Donald Trump said during an interview that the EU is "basically a vehicle for Germany" and reiterated that NATO is "obsolete." 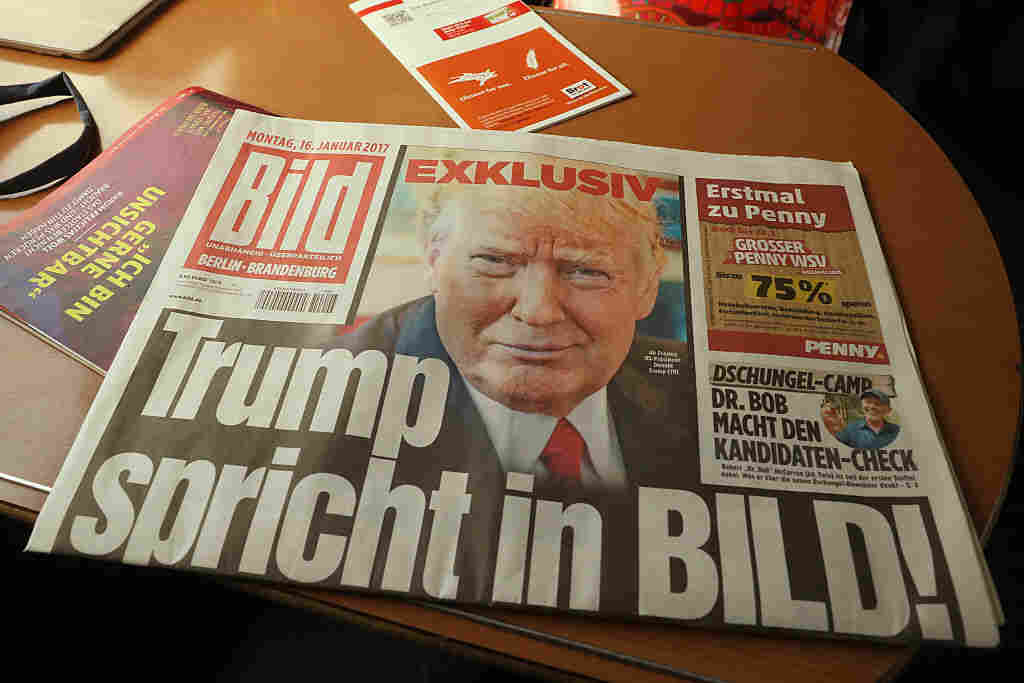 A copy of the German newspaper Bild Zeitung featuring an exclusive interview with U.S. President-elect Donald Trump lies on a table in a train on Monday in Berlin. Sean Gallup/Getty Images hide caption 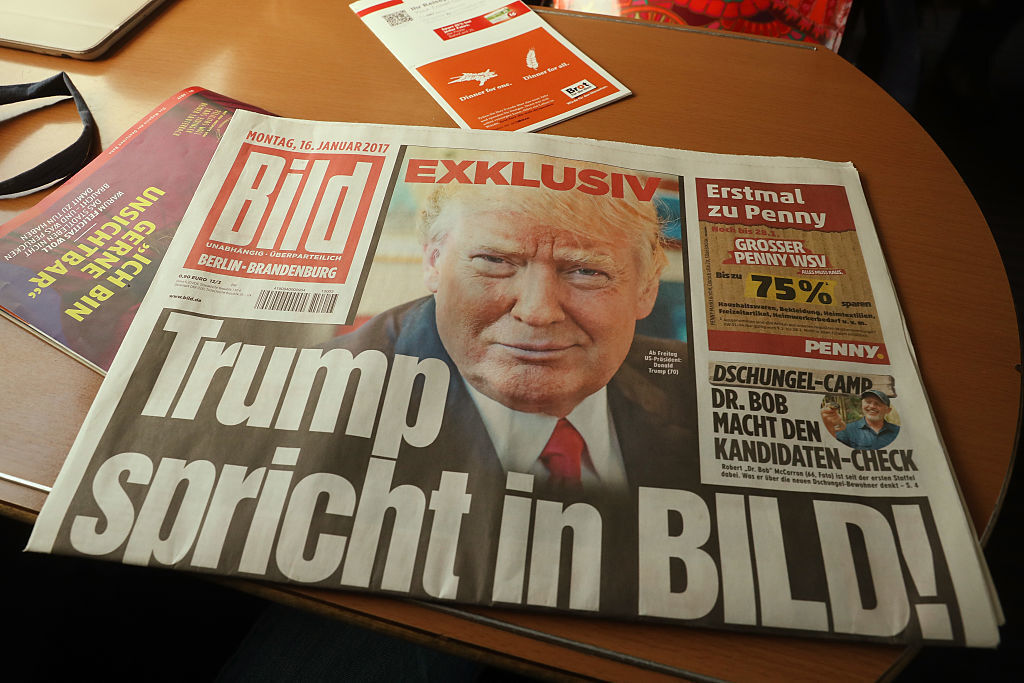 A copy of the German newspaper Bild Zeitung featuring an exclusive interview with U.S. President-elect Donald Trump lies on a table in a train on Monday in Berlin.

European leaders are expressing alarm after U.S. President-elect Donald Trump said the EU is "basically a vehicle for Germany" and reiterated his view that NATO is "obsolete."

Speaking about the EU, Trump said "people want their own identity," and therefore "I believe others will leave." He has previously applauded the U.K.'s decision last year to depart from the 28-nation bloc and repeated that sentiment, saying that "I think Brexit is going to end up being a great thing."

Trump made the comments in an interview published Sunday with the Times of London and Germany's Bild newspaper.

"I've spoken today not only with EU foreign ministers but NATO foreign ministers as well and can report that the signals are that there's been no easing of tensions," German Foreign Minister Frank-Walter Steinmeier told reporters, according to Reuters.

What Does Trump's Victory Mean For NATO?

Danish Foreign Minister Anders Samuelsen said reality was "perhaps more difficult than what is going on on Twitter," according to The Associate Press, in an apparent reference to the President-elect's penchant for posting on social media.

Trump's opinions on NATO appear counter to those of his pick for Secretary of Defense, retired Marine General James Mattis. Mattis stated during his confirmation hearing last week that NATO "is the most important alliance there is," NPR's Tom Bowman reported.

Trump also repeated his earlier criticism that many NATO members "aren't paying what they're supposed to be paying." NPR's Frank Frank Langfitt explains that "Trump's criticism that other NATO allies don't pay their fair share is nothing new and he has a point." Here's more from Frank:

"NATO has set a goal that nations should spend the equivalent of 2 percent of their GDP on defense, but most don't. However, the idea that the U.S. – the dominant military force in NATO — might not defend an ally frightened many in Brussels and beyond."

Trump also stated that he was eager to make a trade deal with the U.K., saying his administration would "work very hard to get it done quickly and done properly." U.K. Foreign Minister Boris Johnson appeared to be the only EU leader who responded positively to Trump's interview, according to The Washington Post.

"It's very good news that the United States of America wants to do a good free-trade deal with us and wants to do it very fast, and it's great to hear that from President-elect Donald Trump," Johnson told reporters, the Post reported.