Accessibility links
More People Over 60 Are Struggling To Pay Off Student Loans, Report Finds : The Two-Way The Consumer Financial Protection Bureau found the number of people 60 and older with student loan debt has quadrupled in the past decade. Most loans were taken out on behalf of a child or grandchild.

The number of people 60 and older with student loan debt has quadrupled in the past decade, and older Americans now represent the fastest-growing segment of the U.S. student loan market, according to a new report by the Consumer Financial Protection Bureau.

The vast majority are loans taken out by parents or grandparents to finance education opportunities for young people, with 73 percent of borrowers over 60 reporting that their student loan debt is owed "for a child's and/or grandchild's education." 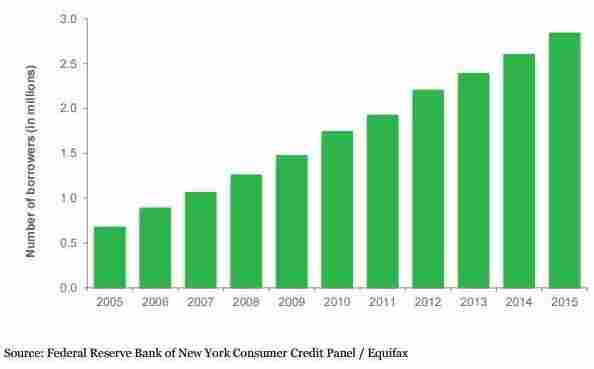 The number of older Americans with student loan debt quadrupled between 2005 and 2015. Screenshot by NPR/Consumer Financial Protection Bureau hide caption 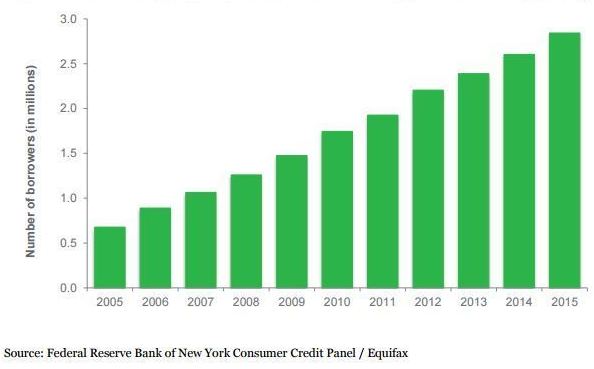 The number of older Americans with student loan debt quadrupled between 2005 and 2015.

Many private student loans require students to apply jointly with a co-signer or co-borrower, the report notes, and more than half of co-signers are over 55.

The increase in both the frequency and the magnitude of student loan debt has led to financial problems for some older borrowers. The CFPB report found multiple indications that people over 60 were struggling to repay student loan debt as they moved into retirement, including: 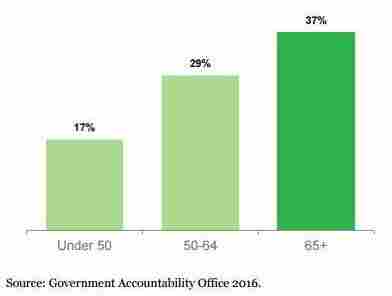 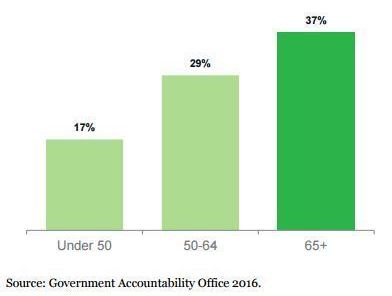 A growing number of older Americans with federal student loans had their Social Security benefits offset because of unpaid student loans.

Social Security is the only source of income for nearly three-quarters of people 65 and older. "This means that benefit offsets may impose serious financial hardship for many of the affected older borrowers," the report states.

The conclusion by the CFPB is that older Americans are frequently in a poor position to handle paying back student loans on behalf of their children and grandchildren. "Unlike their younger counterparts, who generally are expected to experience income growth over their lives, older consumers typically experience a decrease in income as they age," the report concludes.

"However, by rehabilitating or consolidating her defaulted student loans, this same borrower would no longer be subject to the Social Security offset and would also become eligible for an income-driven repayment plan. Given her low income, the [income-driven repayment] payment formula would set her monthly payment amount to $0."

For private loans, the CFPB suggests lenders provide more and better information to students, parents and grandparents. "Prospective cosigners would benefit from lenders and school financial aid officials providing counseling and/or effective information and communication regarding the liability that a co-signer undertakes," it says, but does not suggest federal regulation to mandate such practices.