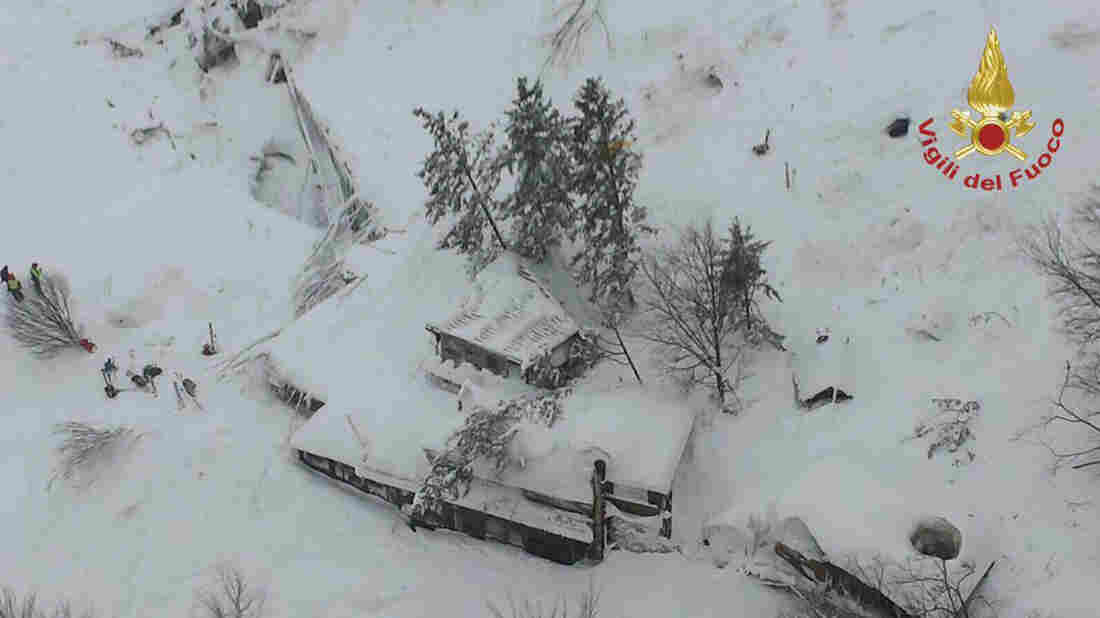 The Rigopiano Hotel, shown early on Thursday, was hit by an avalanche in Farindola, Italy, after earthquakes shook the region on Wednesday. Italian Firefighters/AP hide caption 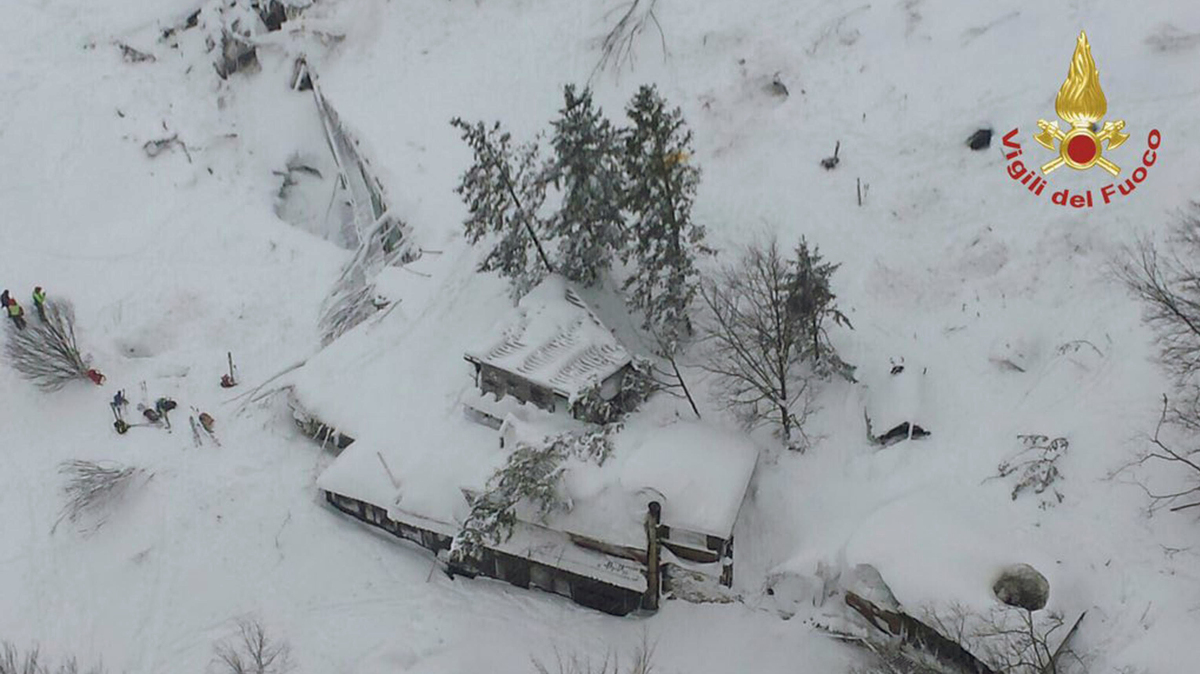 The Rigopiano Hotel, shown early on Thursday, was hit by an avalanche in Farindola, Italy, after earthquakes shook the region on Wednesday.

An avalanche in central Italy has buried a ski resort, leaving about 30 people missing and prompting a frantic rescue effort.

Three bodies have been recovered, The Associated Press reports, but the full extent of the death toll is not yet known. Children are believed to be among the missing.

Rescue workers who arrived at the hotel found two survivors outside, but "no sign of life" in the building, the AP reports.

The avalanche appeared to be triggered by four earthquakes that shook the Abruzzo region on Wednesday, says Christopher Livesay, reporting for NPR from Rome. The disaster struck in the same mountainous region where a powerful earthquake last summer killed nearly 300 people.

The impact of the avalanche was devastating. A firefighter described the hotel as "swept away," the Italian news agency ANSA reports, and some media reports suggest the entire building was shifted downhill by the snow.

The Hotel Rigopiano is four stories tall, according to Reuters, but only the peaks of the roof and one row of windows are visible after the avalanche engulfed the building. 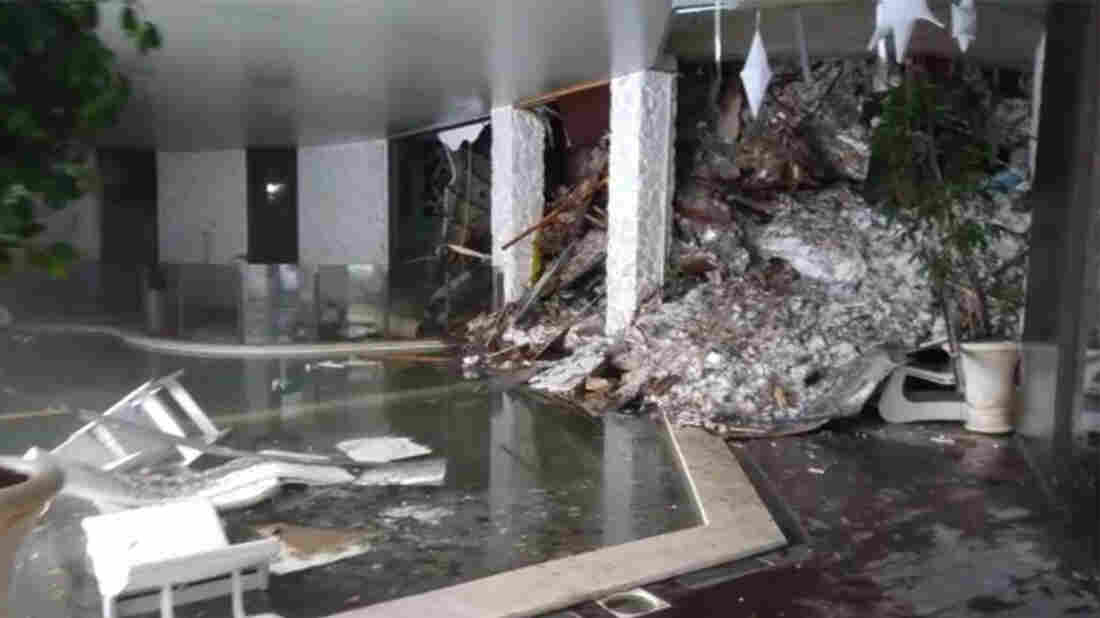 A screenshot from a video shows piles of snow and rubble cascading down the stairway into the foyer of the Hotel Rigopiano on early Thursday. Guardia di Finanza/AP hide caption 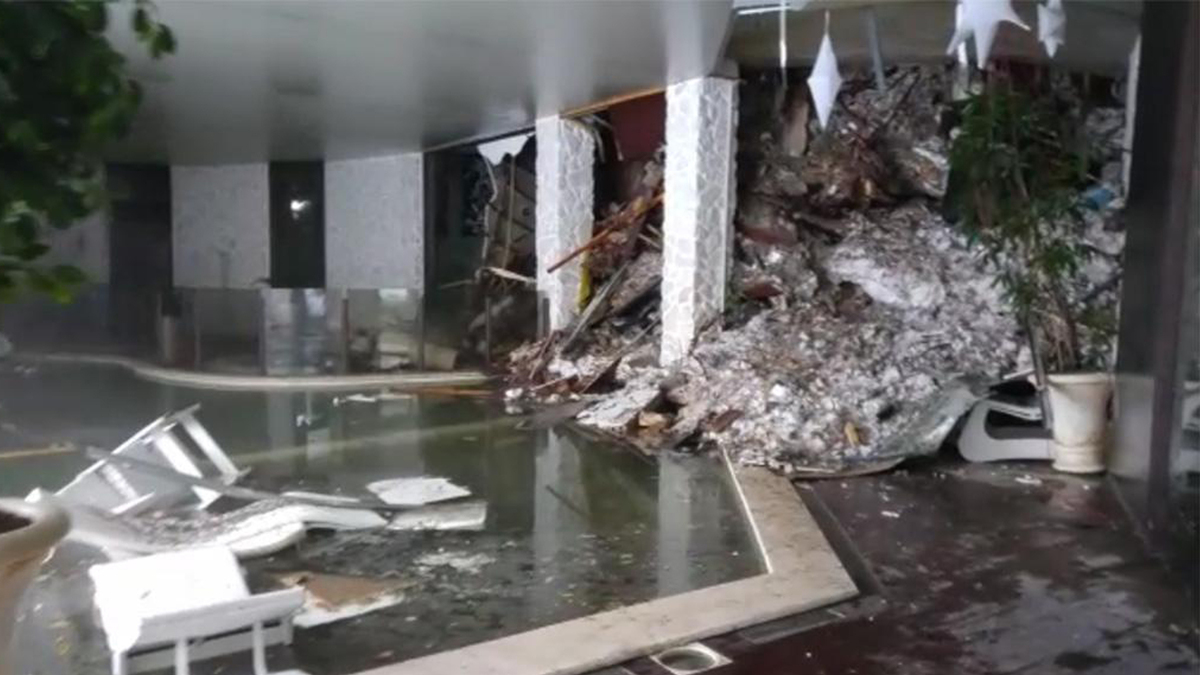 A screenshot from a video shows piles of snow and rubble cascading down the stairway into the foyer of the Hotel Rigopiano on early Thursday.

It's unclear exactly when the avalanche struck. The AP reports that as early as 5:30 p.m. local time on Wednesday, Giampiero Parete, a chef on vacation at the hotel, had called his employer to report the avalanche. He begged Quinto Marcella to alert rescue crews to save his wife and children, the AP reports:

"Parete had left the hotel briefly to get some medicine for his wife from their car, and survived as a result.

" 'He said the hotel was submerged and to call rescue crews,' Marcella said, adding that he phoned police and the Pescara prefect's office, but that no one believed him. 'The prefect's office said it wasn't true, because everything was OK at the hotel.'

"Marcella said he insisted, and called other emergency numbers until someone finally took him seriously and mobilized a rescue, starting at 8 p.m., more than two hours later."

Parete was among the two survivors found outside, the AP reports.

NPR had previously reported that the avalanche struck overnight, while residents were sleeping.

The first rescuers to reach the hotel traveled on skis, ANSA reports, while more teams followed by helicopter.

Footage of the hotel's interior showed hallways filled with snow, skylights cracking beneath the weight of the snow above and walls that had been smashed through by the force of the avalanche.

Here's video, via The Guardian:

Italian media are reporting that some guests at the Hotel Rigopiano managed to send text messages after the avalanche trapped them inside the hotel.

One message, according to local media reports, came from a couple who said, "Help, we're dying of cold."

The AP notes that there are other rescue efforts active in the region, which "has been pummeled by more than a meter (3 feet) of snow in recent days":

"[Storms] have knocked out power and phone lines and blocked roads, isolating towns and hamlets.

" 'We have been abandoned by everyone!' marveled one resident from the province of Teramo, Daiana Nguyen, on Sky TG24. 'They talk about sending in the army: Thirty to 40 men came with shovels. We need heavy machinery.'

"Nguyen said people have been stuck in their homes for days."

Italian Prime Minister Paolo Gentiloni has urged the authorities to "multiply their efforts" and work to reach trapped people — both in the hotel and in the neighboring hamlets — as quickly as possible.