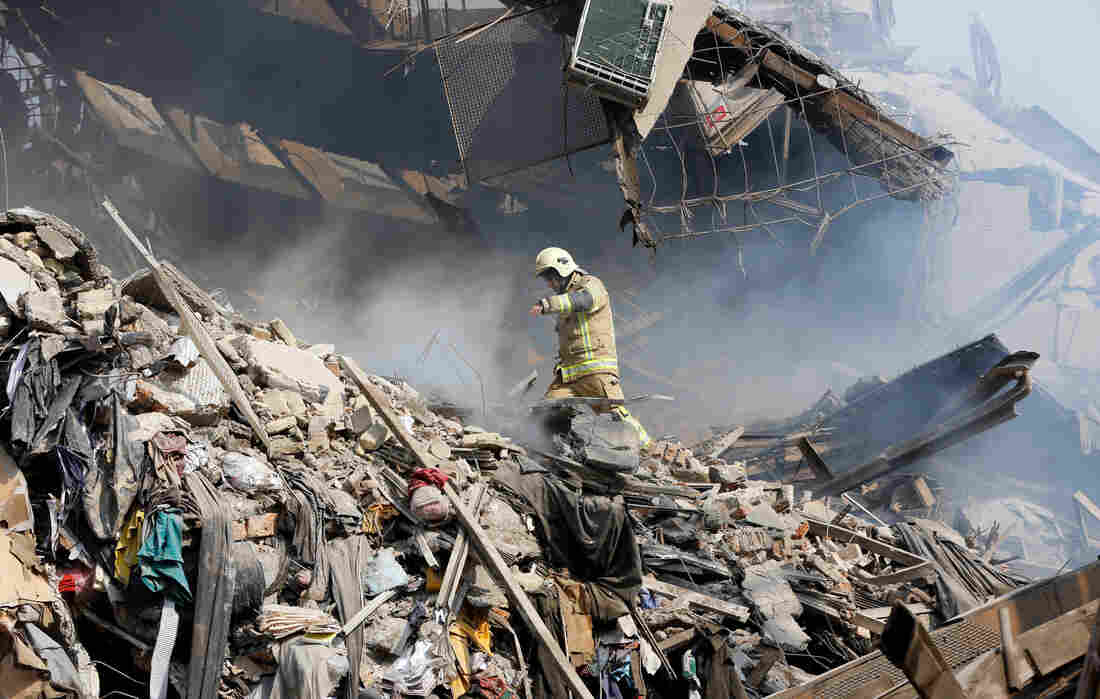 An Iranian firefighter walks amid the debris of Tehran's 17-story Plasco building after it became engulfed in flames and collapsed Thursday. AFP/Getty Images hide caption 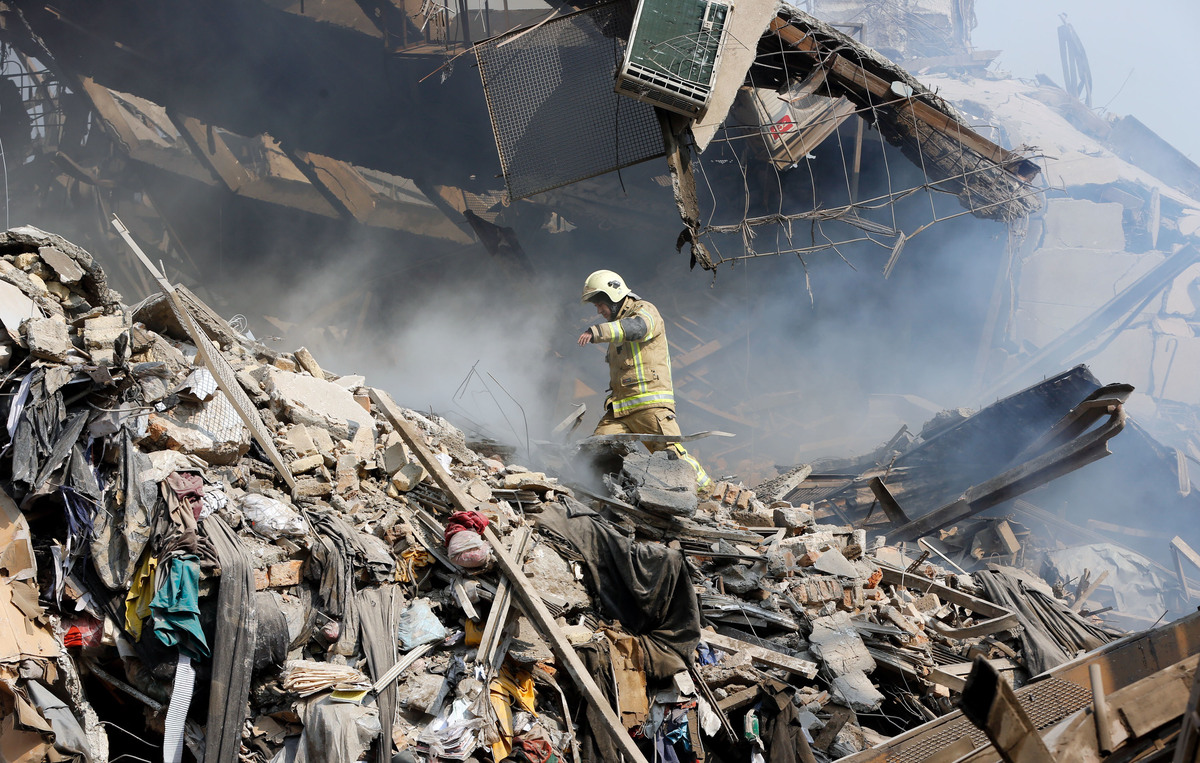 An Iranian firefighter walks amid the debris of Tehran's 17-story Plasco building after it became engulfed in flames and collapsed Thursday.

A high-rise in downtown Tehran, Iran, caught fire and collapsed on Thursday, killing firefighters who were working inside the building.

Reports suggest at least 20 firefighters died, and many more people — including firefighters and civilians — were injured.

The horrifying scene was "inadvertently shown live on state television," The Associated Press reports, and left other firefighters and eyewitnesses crying in the streets.

In Tehran, Waiting For Signs Of Change In 'A New World'

More people are believed to be trapped in the rubble, NPR's Peter Kenyon reports, and rescue operations are ongoing.

The 17-story building that collapsed, the Plasco building, is the oldest high-rise in Iran, he says.

"The building was opened more than 50 years ago and housed retail outlets and a large number of textile manufacturing shops, according to several Iranian media," Peter reports. "Some of the surrounding buildings were damaged in the collapse."

The AP reports that authorities said they had "repeatedly warned tenants about blocking stairwells with fabric" that could be flammable and could block escape routes. Here's more from the wire service:

"Firefighters, soldiers and other emergency responders dug through the debris into the night, looking for survivors. While it was not clear how many people were in the steel-and-concrete building, witnesses said many had slipped through a police cordon while the fire burned to go back inside for their belongings.

" 'They asked us ... using loudspeakers to evacuate the building, but some people went inside again, saying their precious documents, their bank checks, their entire life was in their shops,' said witness Masoud Hosseini. 'They went inside to fetch those documents. I felt like they cared about their belongings, checks and money more than their lives.

" 'Firefighters went inside to bring them out, and then suddenly the building collapsed,' Hosseini said."

The mayor of Tehran, Mohammad Bagher Qalibaf, said the firefighters who died in the collapse were "martyrs," Reuters reports. 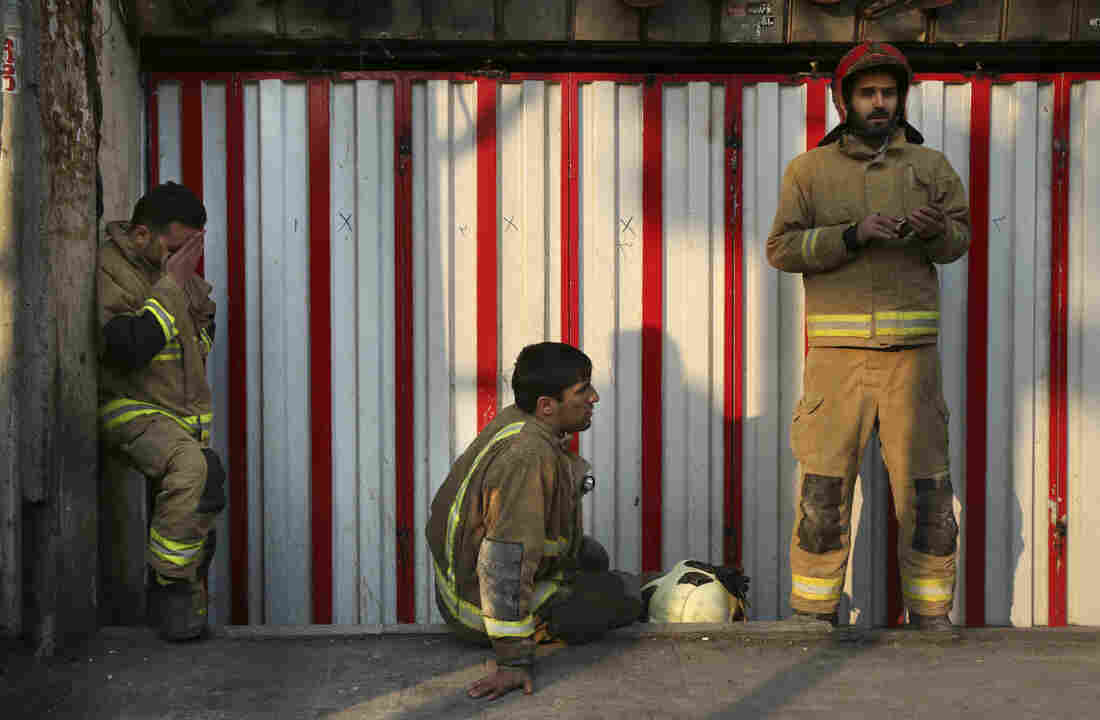 Firefighters stand outside the rubble of the Plasco building on Thursday. Firefighters, soldiers and other emergency responders dug through the ruins of Tehran's oldest high-rise, looking for survivors. Vahid Salemi/AP hide caption 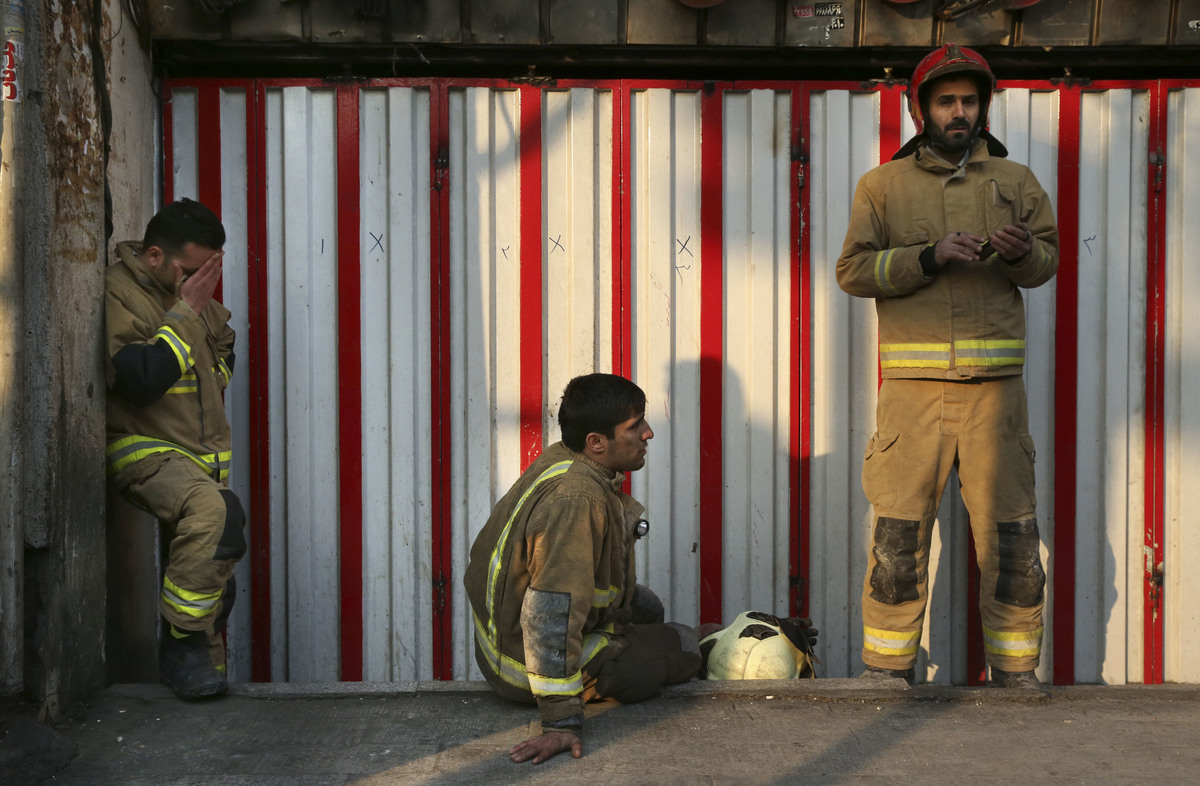 Firefighters stand outside the rubble of the Plasco building on Thursday. Firefighters, soldiers and other emergency responders dug through the ruins of Tehran's oldest high-rise, looking for survivors.

Here's more from the news service:

"The semi-official Tasnim news agency said troops had been sent to help dig through the ruins. It said one of the first firefighters to be reached had demanded to be let back inside to save his colleagues.

"The agency quoted an official in the Tehran governor's office as saying an electrical short-circuit had caused the fire, but there was no immediate confirmation of this.

"President Hassan Rouhani ordered an immediate investigation and compensation for those affected."

Search dogs were looking for survivors, and the rescue operation could last for more than two days, Reuters says, citing Iranian state TV.