Accessibility links
'A Nation Without Borders Is Not A Nation': Trump Moves Forward With U.S.-Mexico Wall : The Two-Way A campaign promise gets closer to reality with a new executive order Wednesday, one of several changes the president announced in a visit to Homeland Security. 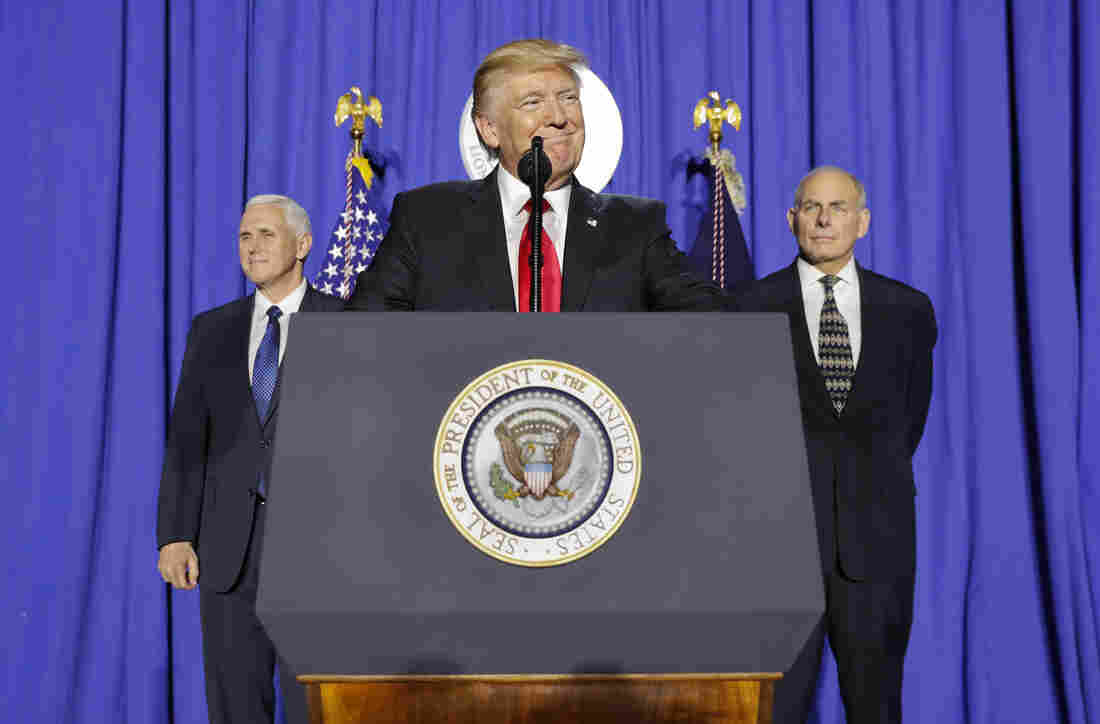 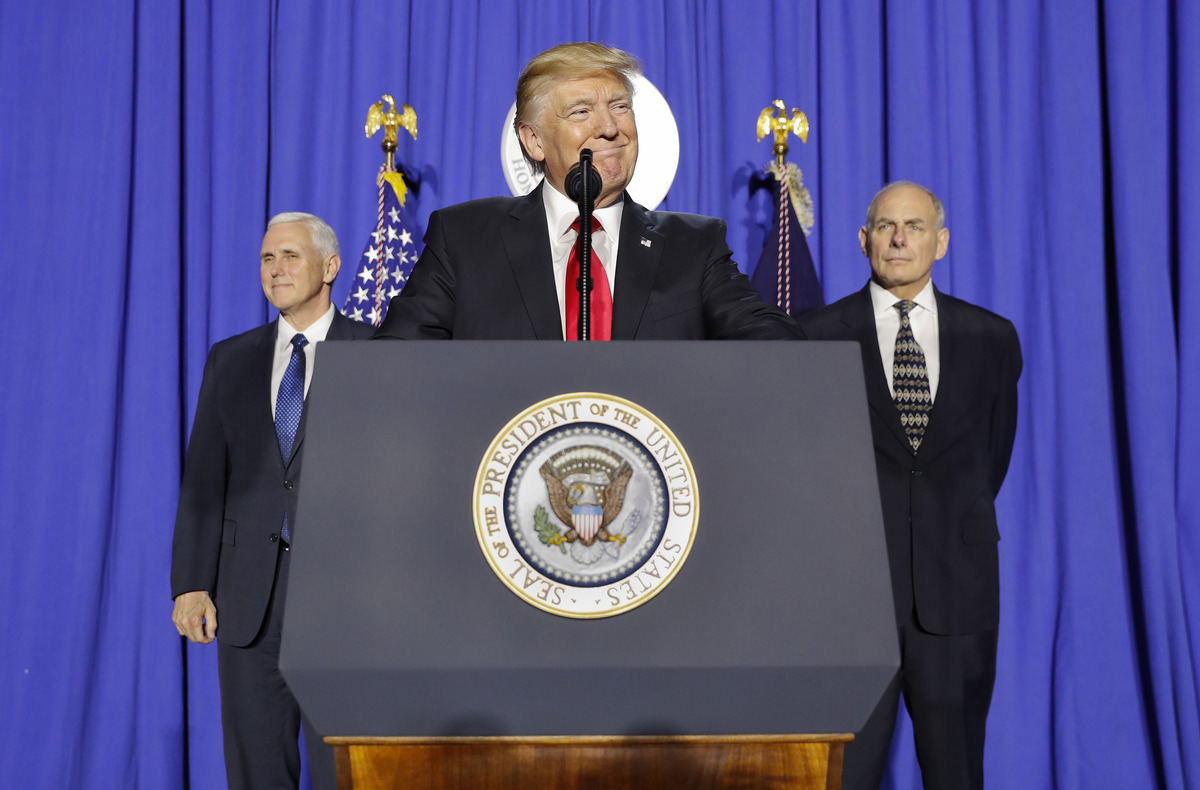 Donald Trump Is Moving Forward With His Wall. Is It Really Going To Happen?

President Trump has signed two executive orders related to immigration and border security, moving ahead with his plans to build a wall along the U.S. border with Mexico and to deport people who are in the country illegally.

Trump signed the orders at the Department of Homeland Security Wednesday, shortly after the agency's new leader, retired Marine Gen. John Kelly, was sworn in.

"Beginning today, the United States of America gets back control of its borders," Trump said in an address at the Homeland Security Department.

The move comes less than one week before Mexican President Enrique Peña Nieto is slated to visit Trump in Washington on Jan. 31. Trump emphasized that the actions were in partnership with Mexico.

"The secretary of homeland security, working with myself and my staff, will begin immediate construction of a border wall," Trump said.

News that the border wall plan is moving forward was criticized by Amnesty International USA, whose executive director, Margaret Huang, said, "This wall would say that those from outside the United States, especially from Latin America, are to be feared and shunned — and that is just wrong."

Trump said in an interview with ABC News that the U.S. will be "reimbursed at a later date" by Mexico for the costs of building the wall — an idea that Peña Nieto flatly rejected earlier this month.

The cost of building such a wall has been estimated at at least $12 billion and perhaps $15 billion for a single-layer barrier. Roughly a third of the U.S.-Mexico border is currently blocked by a fence, as NPR's John Burnett has reported:

"According to an eight-year-old estimate by the Government Accountability Office, the border fence cost the government $3 million to $4 million a mile to build. Estimates for additional fencing — in harsher terrain — could surpass $10 million a mile."

The border wall is included in an executive order titled Border Security and Immigration Enforcement Improvements. It calls on Kelly to "identify and, to the extent permitted by law, allocate all sources of Federal funds for the planning, designing, and constructing of a physical wall along the southern border."

The directive calls for hiring more Border Patrol agents and prioritizing the prosecution of criminal offenses related to the Southern border. It also expands detention capacity — a move that could increase the use of private for-profit prisons. 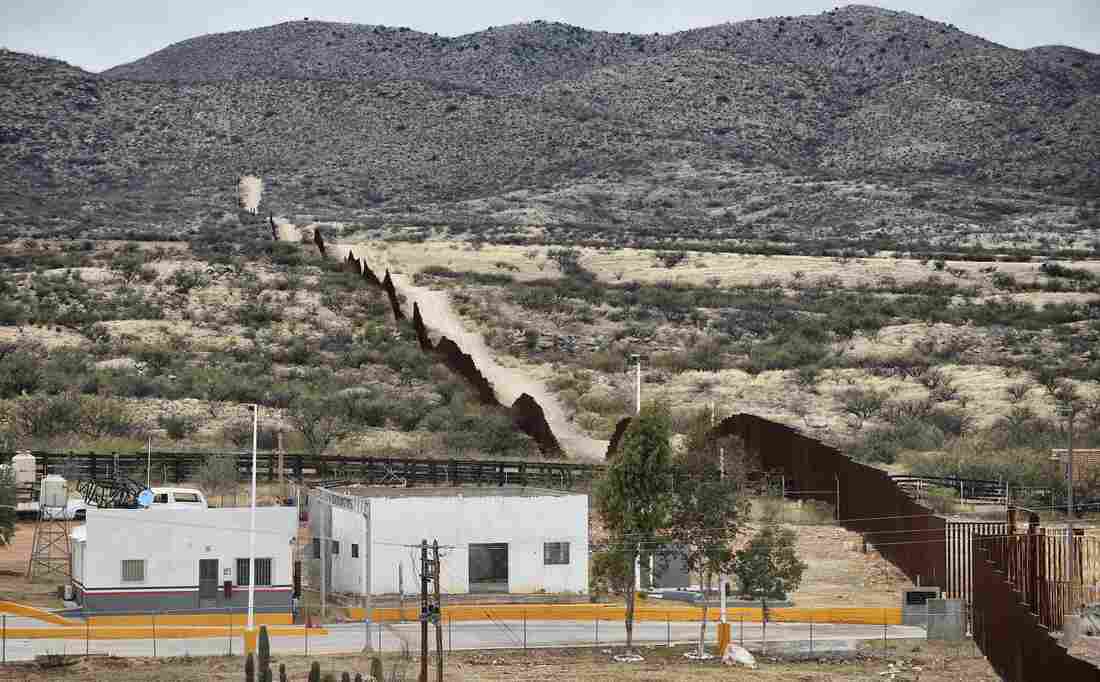 President Trump has signed an order to begin building a new wall along the border between Mexico and the U.S. Here, the border is seen from the community of Sasabe in Sonora state, Mexico, earlier this month. Alfredo Estrella/AFP/Getty Images hide caption 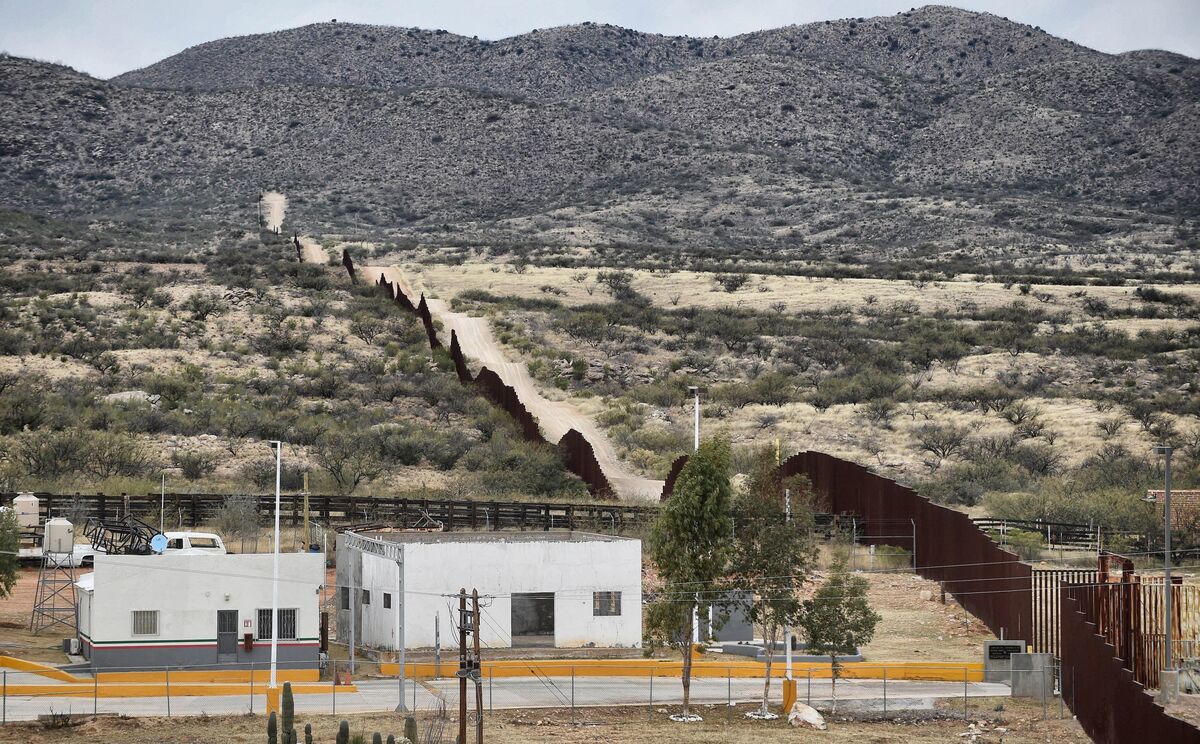 President Trump has signed an order to begin building a new wall along the border between Mexico and the U.S. Here, the border is seen from the community of Sasabe in Sonora state, Mexico, earlier this month.

The Justice Department had already beefed up border prosecutions under Presidents George W. Bush and Barack Obama. The new action suggests law enforcement will be more empowered to prosecute for minor offenses and remove those in the country illegally.

A second executive order, titled Enhancing Public Safety in the Interior of the United States, directs the departments of Homeland Security and Justice to withhold federal funds from so-called sanctuary cities.

In that action, Trump is also restoring the Secure Communities Program — which had ceased to operate in 2014 after being used by both the Bush and Obama administrations to force state and local governments to share fingerprints and other data to help federal officials identify unauthorized immigrants.

Several states and cities sought to opt out of that system, which was also criticized for sometimes resulting in cases of mistaken detention of U.S. citizens.

One critic of Trump's executive orders, Ali Noorani, executive director of the National Immigration Forum, said there are better ways to keep the country safe than to crack down on sanctuary cities.

Big day planned on NATIONAL SECURITY tomorrow. Among many other things, we will build the wall!

"Pressuring local law enforcement to take on immigration responsibilities undercuts the very oath they take to 'serve and protect' the entirety of their community. Smart law enforcement is built on intelligence gathering and trust, which are dramatically undermined once the cop on the corner is asking victims of crime about their immigration status," he said.

Mark Krikorian, director of the Center for Immigration Studies, a group that favors immigration limits, said in an email that the administration's battle with sanctuary cities is just beginning.

"Who will blink first--cities or the federal government? Cutting off their money is step one. LA and New York will not change their policies. This will play out for years," he said.

Wednesday's executive order also seeks to force other nations to take back criminals in the U.S. illegally by using leverage such as withholding U.S. visas. And it will allow Immigration and Customs Enforcement to more aggressively arrest, detain and remove people from the U.S. It also calls for the hiring of 10,000 additional immigration officers.

The order also will create an "Office for Victims of Crimes Committed by Removable Aliens," aimed to support these victims and their families. The order does not detail exactly how these victims will be supported but states that the office will "provide quarterly reports studying the effects of the victimization by criminal aliens present in the United States."

The actions come one day after the president tweeted about new immigration policies, saying Tuesday night, "Among many other things, we will build the wall." Construction of a border wall was a keystone of Trump's presidential campaign.

Questions still surround the details of the plan for a wall — chief among them, how the undertaking would be paid for. A law already exists that experts say gives Trump the authority to start building the wall. It is the Secure Fence Act of 2006. It was bipartisan and overwhelmingly supported during the Bush administration.

The 2006 law envisions both physical barriers and high-tech features, like sensors and cameras. It also mentions a two-layer fence — but that fence was never built, and the legislation didn't include money to pay for one. Ten years later, the process could begin in earnest.