Accessibility links
Trump Threatens To 'Send In The Feds' Over Chicago's Violent Crime : The Two-Way The Department of Justice is already working with the Chicago Police Department, and local authorities are cooperating with the DEA, ATF and FBI to investigate and combat violent crime in the city. 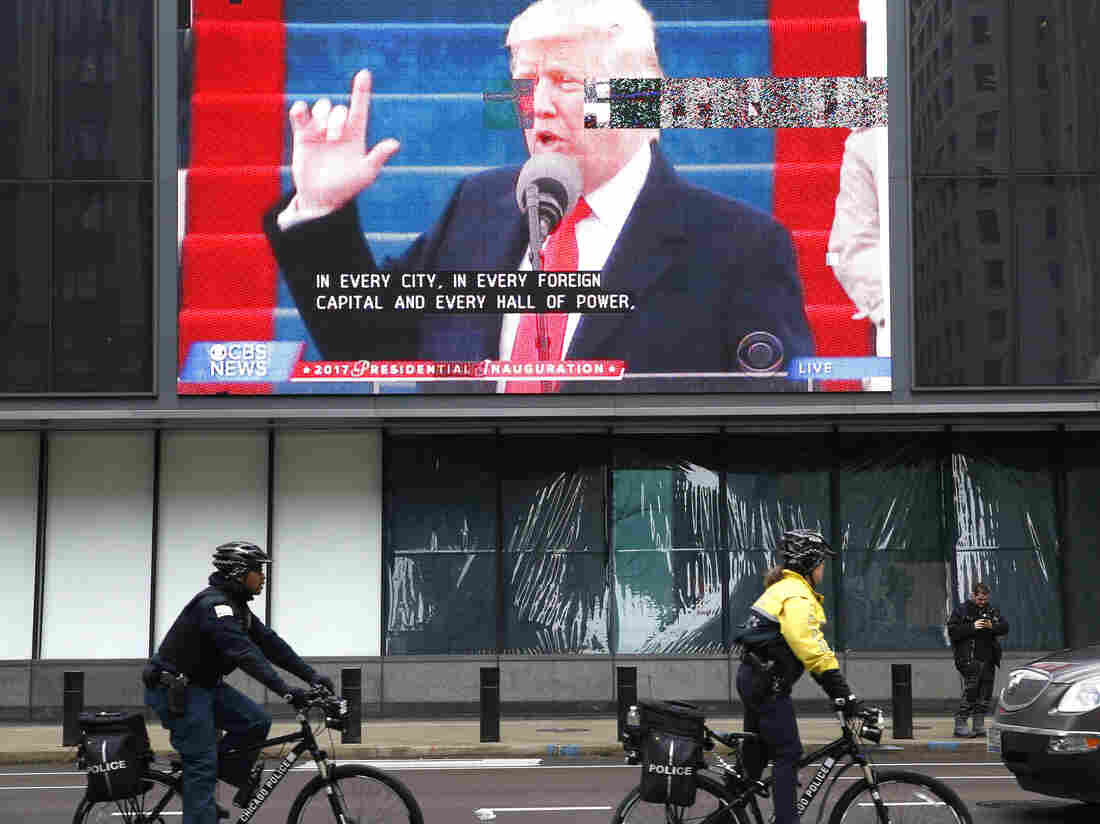 Chicago police officials ride bikes by a broadcast of President Trump's inaugural address on Jan. 20. The president has threatened to "send in the Feds" to intervene in the city's law enforcement. Nam Y. Huh/AP hide caption 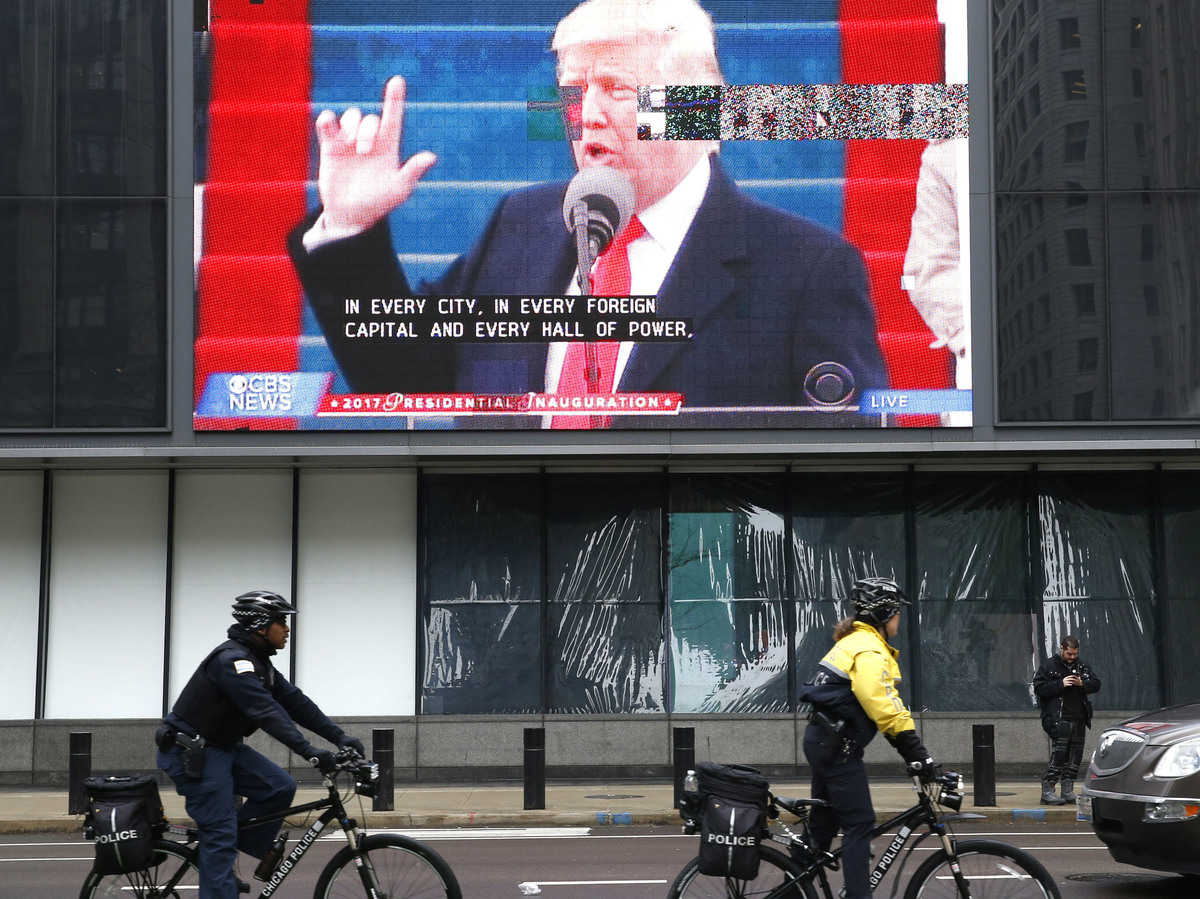 Chicago police officials ride bikes by a broadcast of President Trump's inaugural address on Jan. 20. The president has threatened to "send in the Feds" to intervene in the city's law enforcement.

On Tuesday night, President Trump threatened to intervene in Chicago's law enforcement, citing the number of shootings and murders there in 2016 and 2017.

It wasn't clear what type of intervention the president was referring to in a tweet he sent out Tuesday evening saying he "will send in the Feds!" if Chicago "doesn't fix the horrible 'carnage' going on."

As in many major American cities, the federal government is already deeply involved in Chicago's approach to fighting violent crime. The Federal Bureau of Investigation has, among other units, a cold-case homicide squad, and the Bureau of Alcohol, Firearms, Tobacco and Explosives investigates "violent offenders, career criminals, gun traffickers and gangs" in the city.

The Department of Justice announced earlier this month that it had found a pattern of abuse within the Chicago Police Department, and is working with the city government to reach an agreement in which the federal department will oversee the city's police.

Speaking on WTTW, Chicago's local PBS station, Mayor Rahm Emanuel said Tuesday that "there's a lot the federal government can do" to combat violent crime in the city. He cited the need for federal gun control legislation and asked for federal funding for additional police officers.

Emanuel also said the federal government should be "investing in neighborhoods that are hard-hit by poverty" and become "a breeding ground for violence" by putting federal funds toward after-school and summer jobs programs.

Chicago police Superintendent Eddie Johnson also issued a statement, saying, "The Chicago Police Department is more than willing to work with the federal government to build on our partnerships with D.O.J., F.B.I., D.E.A. and A.T.F. and boost federal prosecution rates for gun crimes in Chicago."

This is the second time this month the president has tweeted about violent crime in Chicago, and the White House's website, updated by the new administration, specifically mentions the issue.

In each reference, the president and his administration have included specific numbers to illustrate Chicago's problem with violent crime. On Tuesday, the president quoted numbers originally reported Monday by The Chicago Tribune.

"As of early Monday, at least 228 people had been shot in Chicago so far this year, a 5.5 percent increase from the 216 shot in the same period time last year. There have been at least 42 homicides, up 23.5 percent from the 34 homicides from the same period in 2016," the newspaper reported.

The newspaper tracks homicides in the city, and noted that its numbers were higher than those reported by the Chicago Police Department because they include "shootings on area expressways, police-involved shootings, homicides in which a person was killed in self-defense, or pending death investigations."

But while Chicago led the nation in the absolute number of murders last year, the raw number tells only part of the story.

Chicago's city-wide per capita murder rate, which is better at capturing human risk because it takes into account the total population, is well below that of other cities, including St. Louis and Baltimore, a review of the FBI's most recent crime data reveals.

"Chicago's homicide rate is not among the nation's highest — but the number of deaths last year, 762, was the worst the city had seen in years and far exceeded those of New York and Los Angeles," reported NPR's Cheryl Corley.

Although the FBI's data is the most comprehensive national source of information, the Pew Research Center has noted:

"Fair warning: The FBI stats are compiled from reports by local police agencies that serve populations of at least 100,000, and for various reasons — including the fact that not all agencies reported data every year — can be difficult to compare meaningfully across cities or time periods."

Member station WBEZ in Chicago has been revisiting families affected by homicides in 1998, the last time the city had more than 700 murders. See more of their work here.