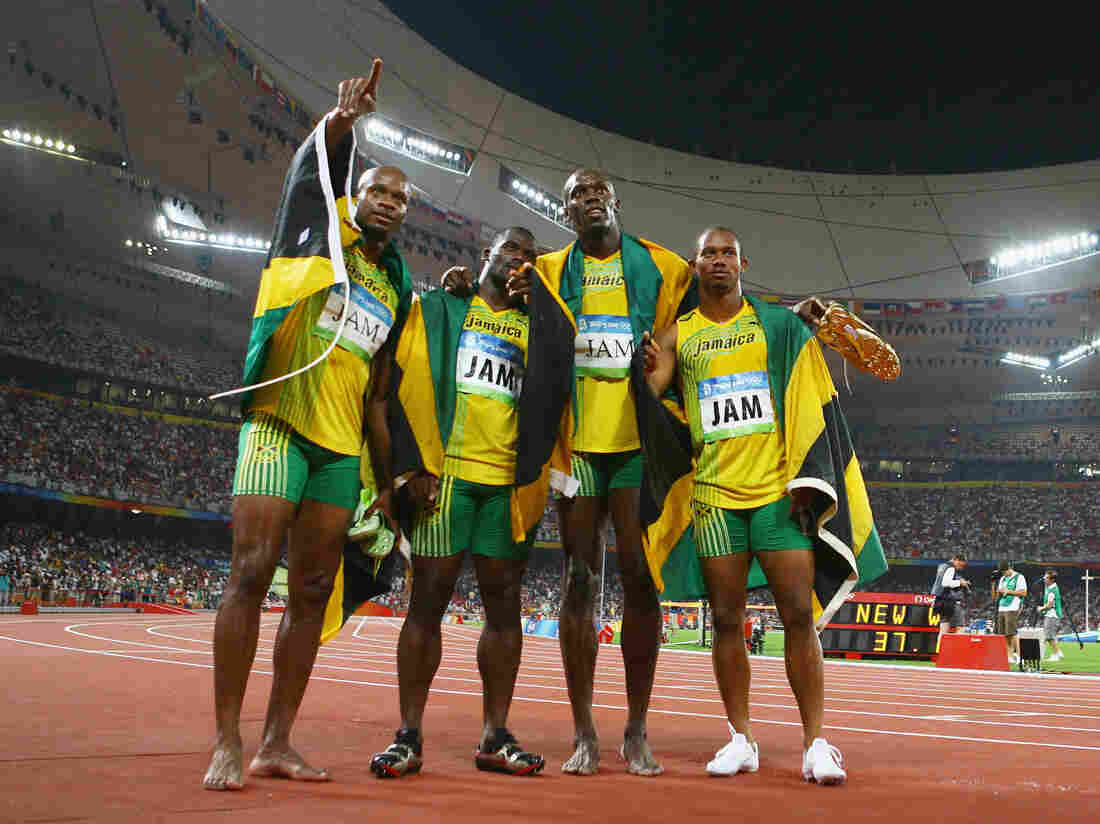 Jamaica's (left to right) Asafa Powell, Nesta Carter, Usain Bolt and Michael Frater celebrate their gold medal after the men's 4x100-meter relay final in Beijing in 2008. With Wednesday's announcement, the team will have to return those medals. Shaun Botterill/Getty Images hide caption 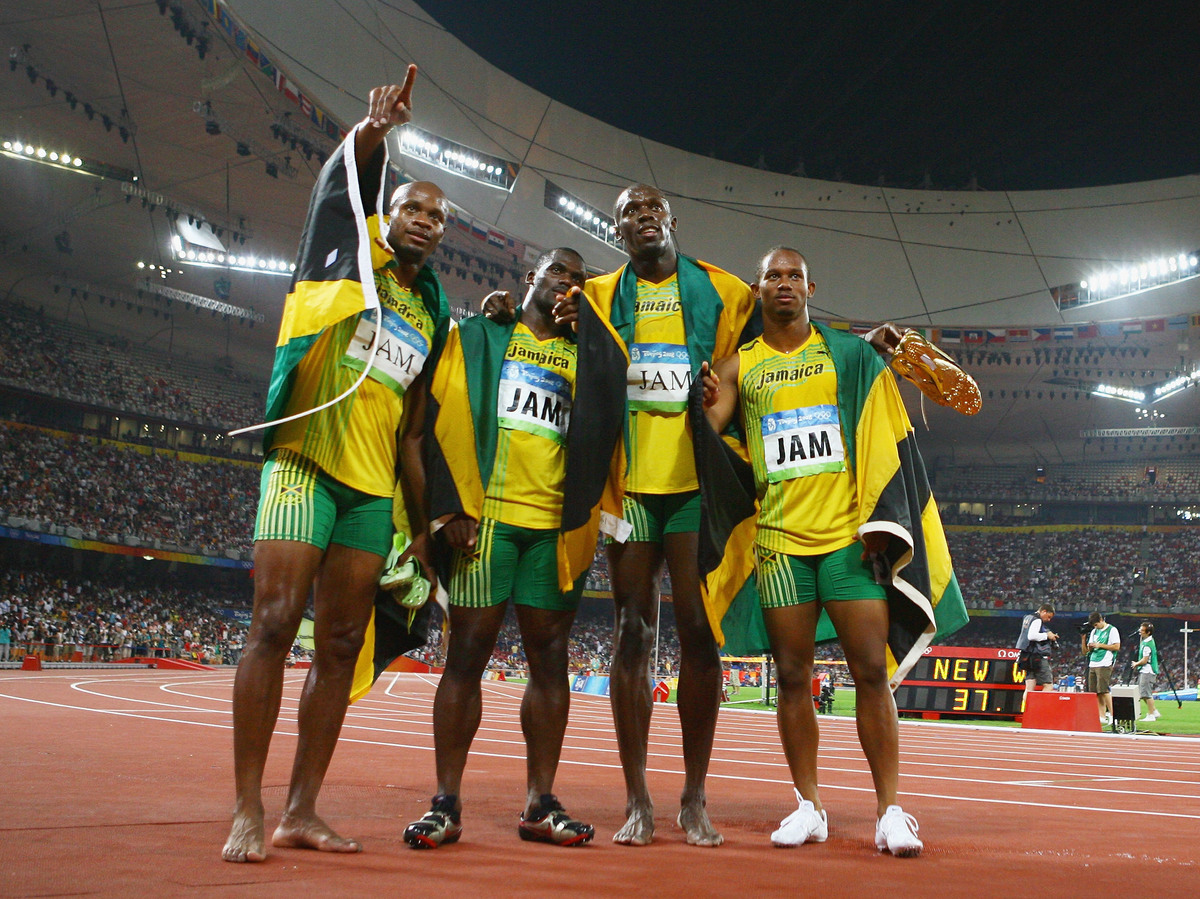 Jamaica's (left to right) Asafa Powell, Nesta Carter, Usain Bolt and Michael Frater celebrate their gold medal after the men's 4x100-meter relay final in Beijing in 2008. With Wednesday's announcement, the team will have to return those medals.

Rio was good to Usain Bolt.

The record-setting sprinter left the 2016 Summer Games with more than just three Olympic golds in hand; he also had a place etched into history as the first athlete to complete a "triple-triple" — or victories in all three major sprint events in three consecutive Olympics.

It turns out Beijing, however, has not been so kind.

The International Olympic Committee announced Wednesday that Bolt would have to return his 2008 Olympic gold medal in the 4x100-meter relay. In a retest of 454 samples from those Summer Games, the IOC found that one of Bolt's teammates on that Jamaican relay team, Nesta Carter, violated anti-doping rules.

The disqualification retroactively unravels Bolt's triple-triple. It also knocks him from the top spot in history books that he had shared with American Carl Lewis and Finland's Paavo Nurmi as the only track and field athletes to win nine gold Olympic medals. 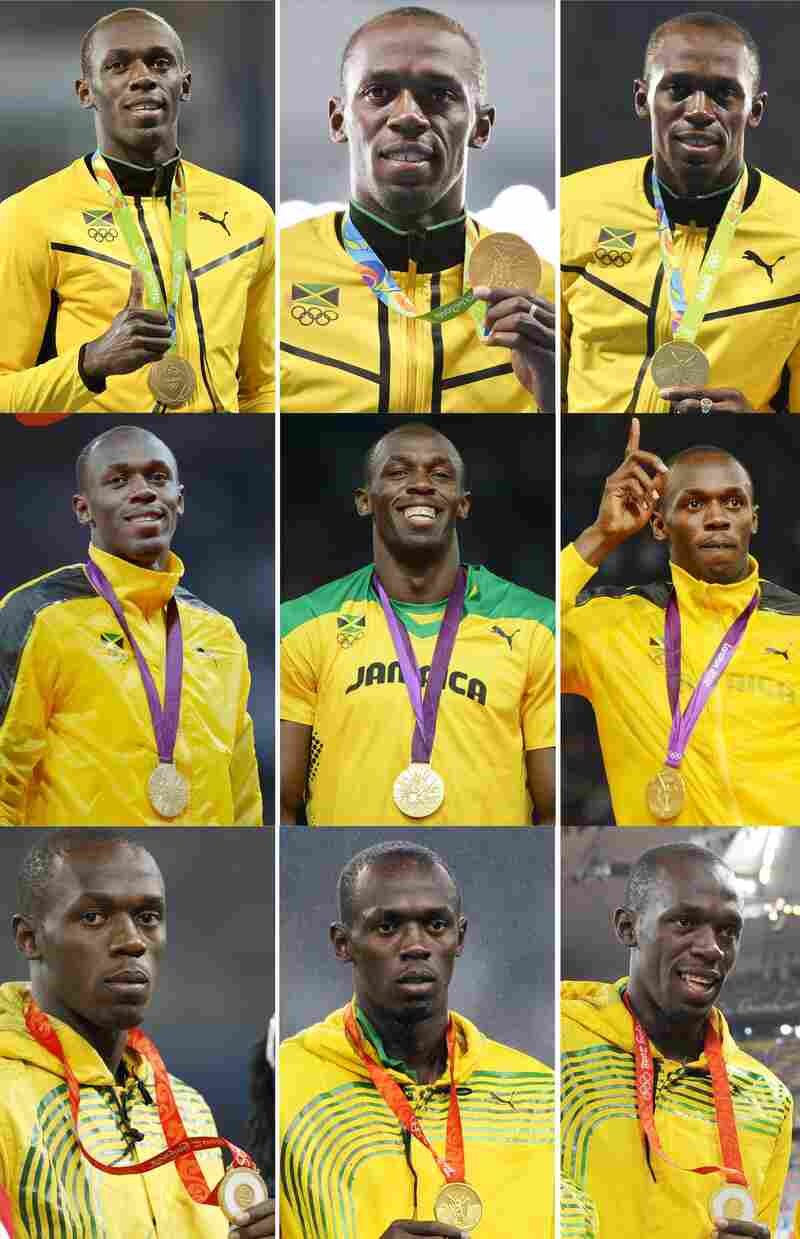 This composite of nine photographs shows Usain Bolt's then-triple-triple. He poses with his gold medals at the Beijing 2008 (bottom row), London 2012 (middle row) and Rio 2016 Olympic Games. The medals are for (left to right) 100-meter, 200-meter and 4x100m races. AFP/Getty Images hide caption

In its statement, the IOC said Carter's re-analyzed sample tested positive last year for methylhexaneamine, a prohibited stimulant often used as a nasal decongestant, and in fitness supplements.

The IOC reclassified the drug as a "specified" substance in 2011, enabling violators to seek reduce punishments if they could prove they didn't use it to enhance performance. But in 2008, when Carter's sample was taken, no such leniency was in place.

Teammates Asafa Powell, a former world-record holder himself, and Michael Frater must return their medals from the event, as well.

With Jamaica's place at the top of the 4x100 podium now vacated, second-place finishers Trinidad and Tobago can lay claim to the 2008 gold. Japan gets silver, and Brazil slides up to bronze.

Carter is among dozens of Olympians to have been caught up in the IOC's retests of samples from Beijing. The international governing body has been re-analyzing samples already tested in recent Olympics, using improved technology to cast a closer eye on earlier results.

Bolt has not yet commented publicly on the IOC announcement. But last June, when Reuters broke the news of Carter's failed test, Bolt told the news service it would be "heartbreaking" to have to return his medal "because over the years you've worked hard to accumulate gold medals and work hard to be a champion."

But he said at the time that he would accept the ruling if it should come to pass.

"It's just one of those things. Things happen in life, so when it's confirmed or whatever, if I need to give back my gold medal, I'd have to give it back — it's not a problem for me."