Accessibility links
On Abortion, Goals Of Back-To-Back Marches Couldn't Be More Different : The Two-Way Less than a week after the Women's March, anti-abortion activists are taking to the streets for what they call the March for Life. 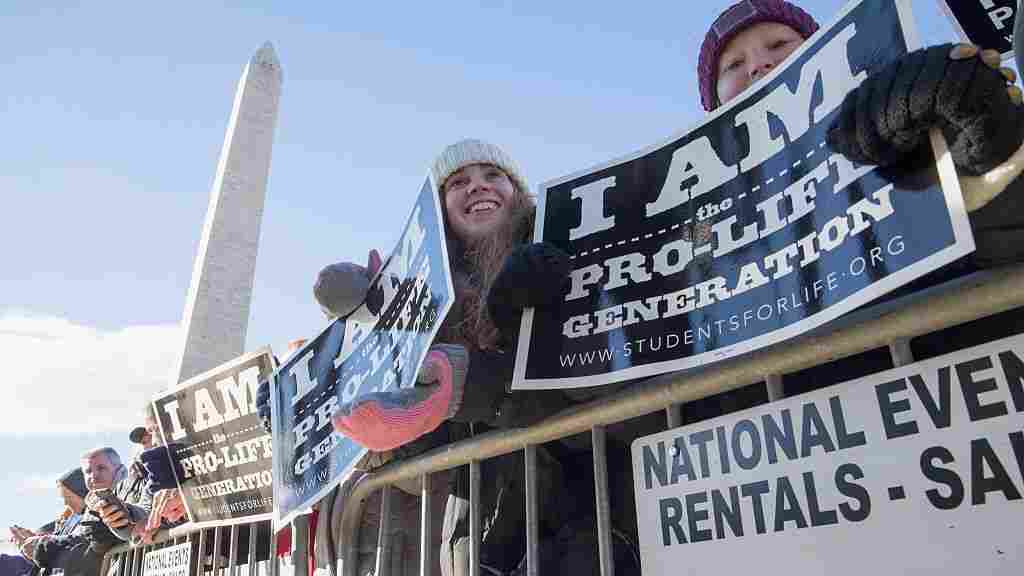 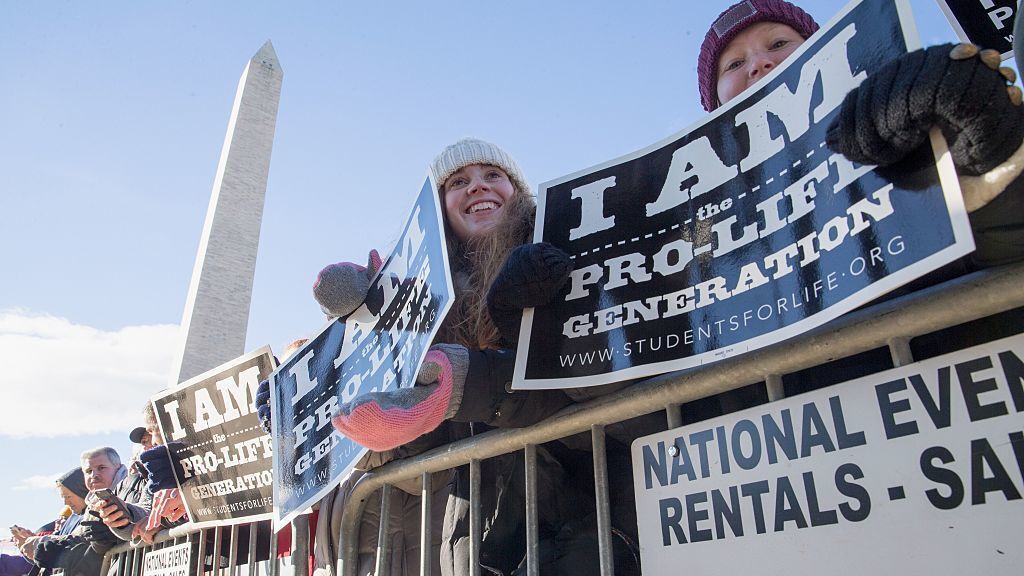 Opponents of abortion rights gather at the Washington Monument to hear Vice President Pence speak at the March for Life rally on Friday.

Marchers — many of them women — are descending on Washington, D.C., to send a message about abortion to the Trump administration and the Republican-led Congress.

If that sounds like déjà vu, it's not: What the organizers call the March for Life is a protest against legalized abortion, unlike the Women's March last week, which included support for abortion rights in its platform.

A different kind of march

The March for Life is also an annual event, held each year since the Supreme Court's Roe v. Wade decision legalized abortion nationwide. This year's march and rally come less than a week after the Women's March, which was organized on social media largely as a protest against President Trump's campaign rhetoric. While the marches in Washington and around the world focused on an array of issues including LGBT rights and the environment, reproductive rights were a major focus.

Vice President Pence and presidential adviser Kellyanne Conway are scheduled to speak at the Friday rally. A statement from the March for Life pointed out that Pence will be the first vice president in history to speak at the march.

Can feminists be "pro-life"?

That juxtaposition has opened up a larger debate about how women who consider themselves "pro-life" fit into the feminist movement. The issue became a point of tension surrounding the Women's March after a handful of anti-abortion activists said they were planning to attend. In a statement, organizers apologized for initially including the anti-abortion group as a partner, stating that the march's "platform is pro-choice and that has been our stance from day one."

The group New Wave Feminists, a self-described "pro-life feminist" organization, was initially granted partnership status in the Women's March, only to have that status rescinded when it became clear that the group opposed abortion rights.

Destiny Herndon-De La Rosa of New Wave Feminists said she was "certainly disappointed" but had "no hard feelings" about that decision.

"The march on Saturday was AMAZING," Herndon-De La Rosa wrote afterward in an email to NPR. "I honestly can't begin to describe how wonderful it was. It was so positive, no negativity, so much support."

Herndon-De La Rosa said she is also attending the March for Life in Washington.

Another anti-abortion group, Students for Life of America, also wanted to have a presence at both marches, said President Kristan Hawkins. She said they walked with the crowds of women in pink hats carrying banners that read, "Abortion Betrays Women" and "We Don't Need Planned Parenthood." Hawkins said some of the marchers tried to block their banners at one point, but overall, "We had some really good interactions."

Among marchers, a search for some common ground

For some abortion-rights supporters, there is room for disagreement on the issue among those who identify as feminists.

Kristie Hewitt, 49, came to the Women's March from Lansing, Mich. She said she is worried about the potential for cuts to federal funding for women's health services at Planned Parenthood under the Trump administration.

"I really believe in women's reproductive rights. I cannot quietly go back to the 1950s," she said.

But Hewitt said she was OK with marching alongside women who disagree.

"I think anybody has a place in this movement; we're all here for the same reason — women's rights — and I think there's a place for everybody," Hewitt said. "And we all need to sit down at the table and talk, and have a conversation as to what's the best for everybody."

But in terms of policy, the disagreements are stark. Already, abortion opponents are seeing some of the actions they want from Trump and the Congress, including a presidential memorandum banning federal funding for groups overseas that provide or "promote" abortion.

Other goals, said Hawkins of Students for Life, include cutting federal funding for reproductive health services at Planned Parenthood, which Hawkins said is "in the fight of their lives."

"So it's even more important that pro-lifers are there, they show up, and they show this administration in Washington that we're paying attention," Hawkins said.

March for Life organizers are expecting "tens of thousands" of marchers in Washington, Mancini said, along with dozens of smaller, local marches being held around the country in the early months of 2017. The goal, she said, is to mobilize anti-abortion activists around the country to put pressure on elected leaders to carry forward their agenda.

Mancini's top priorities include making permanent the federal ban on public funding for abortions and a ban on late abortions. State laws banning abortions after 20 weeks' gestation have been found unconstitutional in federal court.

That's why a major concern for anti-abortion groups is to see Trump follow through on his pledge to social conservatives to appoint judges who align with their views. Trump has promised to announce his nomination to replace late U.S. Supreme Court Justice Antonin Scalia next Thursday, a move activists on both sides of the abortion debate will be watching closely.