Accessibility links
Donald Trump's Call With Vladimir Putin Included In Busy Day On The Phone With Foreign Leaders : The Two-Way The talk with the Russian president is just one of five that Trump has scheduled Saturday. By the end of the day, Trump will have also spoken with leaders from Japan, Germany, France and Australia. 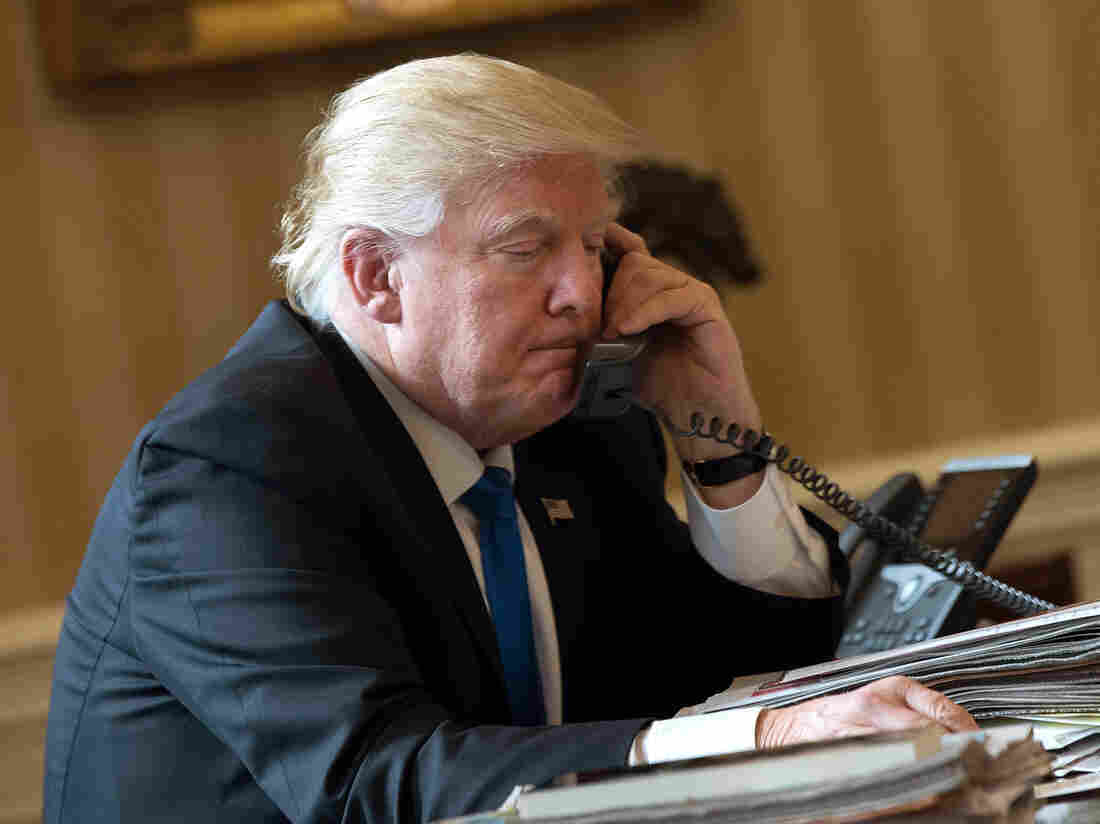 President Donald Trump speaks on the phone with Russian President Vladimir Putin in the Oval Office on Saturday. It was one of five calls with foreign leaders Trump had scheduled for the day. Drew Angerer/Getty Images hide caption 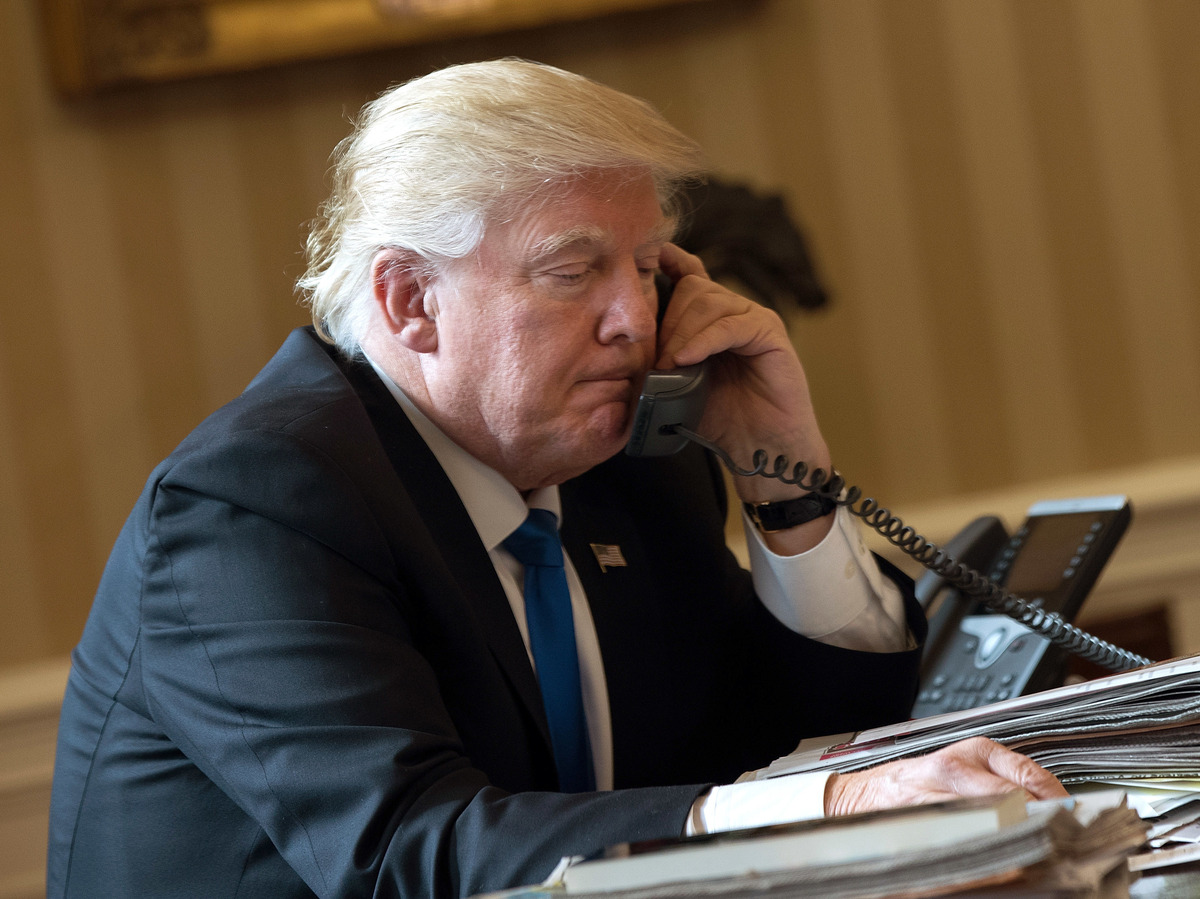 President Donald Trump speaks on the phone with Russian President Vladimir Putin in the Oval Office on Saturday. It was one of five calls with foreign leaders Trump had scheduled for the day.

It has been a day thick with phone calls for President Trump. By the end of the day, the president will have spoken over the phone with the leaders of five countries, including Russian President Vladimir Putin.

Administration officials have not yet announced the content of the 50-minute phone call with Putin, which Vice President Mike Pence also sat in on. But in a statement, the Kremlin says that "both sides showed their readiness for active, joint work to stabilize and develop Russian-American cooperation," according to The Associated Press.

It was Abe's call that opened the day, with a discussion focused primarily on the U.S.-Japan alliance.

During the conversation, Trump "affirmed the ironclad U.S. commitment to ensuring the security of Japan," according to the White House, in what marks a departure from some of Trump's statements during the presidential campaign.

During that campaign, Trump said specifically that he believes Japan does not sufficiently reimburse the U.S. for American military bases there. In the first presidential debate, Trump had suggested he would consider pulling those bases out of the country if Japan did not up its payments.

"We defend Japan. We defend Germany. We defend South Korea. We defend Saudi Arabia. We defend countries," Trump said last September. "They do not pay us what they should be paying us because we are providing a tremendous service and we're losing a fortune."

That rhetoric left America's Asian allies uncertain about how his incoming administration would handle trade and security in the region, as NPR's Elise Hu reported last year.

On Monday, Trump confirmed his disapproval of one tentative agreement with Japan, signing a memorandum to withdraw the U.S. from the Trans-Pacific Partnership, a free trade deal that would have comprised 12 Pacific Rim countries, including Japan.

Despite that earlier move on the multilateral TPP, Trump and Abe also "committed to deepen the bilateral trade and investment relationship" on Saturday, according to the White House.

After his talk with Abe, Trump "held an extensive telephone conversation" with Merkel about a wide array of issues, the White House says.

On the docket was NATO, the Middle East and North Africa, Russia and Ukraine, according to a statement from the office of Trump's press secretary.

"The President and Chancellor also agreed on the NATO Alliance's fundamental importance to the broader transatlantic relationship and its role in ensuring the peace and stability of our North Atlantic community."

As with the alliance with Japan, Trump has previously voiced skepticism of NATO, calling it "obsolete" in an interview earlier this month with the Times of London and Germany's Bild newspaper.

In the same interview, he said that many NATO members "aren't paying what they're supposed to be paying."

In their conversation Saturday, Trump and Merkel appear to have touched on the topic of payments.

"In this vein, the leaders recognized that NATO must be capable of confronting 21st century threats and that our common defense requires appropriate investment in military capabilities to ensure all Allies are contributing their fair share to our collective security," the White House said of the talk.

"Chancellor Angela Merkel and President Donald Trump held an in-depth telephone conversation on Saturday afternoon. A broad range of topics were addressed, including NATO, the situation in the Middle East and North Africa, relations with Russia and the conflict in eastern Ukraine.

"Both reaffirmed the importance of close German-American cooperation for the security and prosperity of their countries. They both expressed the intention to deepen the already excellent bilateral relations in the coming years.

"The chancellor and the president also agreed on the fundamental importance of the NATO alliance for transatlantic relations and the important role it plays in maintaining peace and stability. Both are convinced that NATO must face the challenges of the 21st century and that a joint defense requires adequate investment in military capabilities and a fair contribution of all allies to collective security.

"They also agreed to intensify their cooperation in the fight against terrorism and violent extremism as well as in the stabilization of the Near and Middle East and North Africa. ..."

Spokespeople for both parties say Trump accepted Merkel's invitation to attend the G-20 summit in Hamburg, Germany, in July.