Accessibility links
7 Targeted Countries React To Trump's Ban On Immigration : The Two-Way Iraq responded with both shock and, in Parliament, a desire for retaliation. In Sudan, the government summoned a U.S. diplomat to protest Friday's executive order. 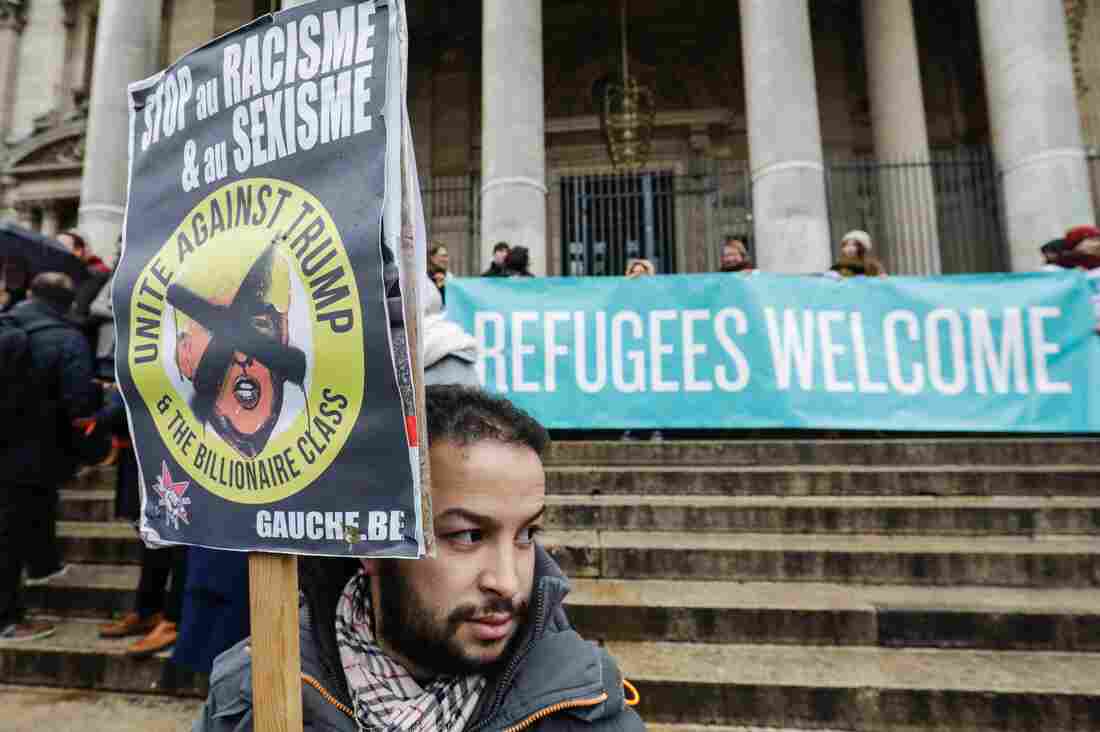 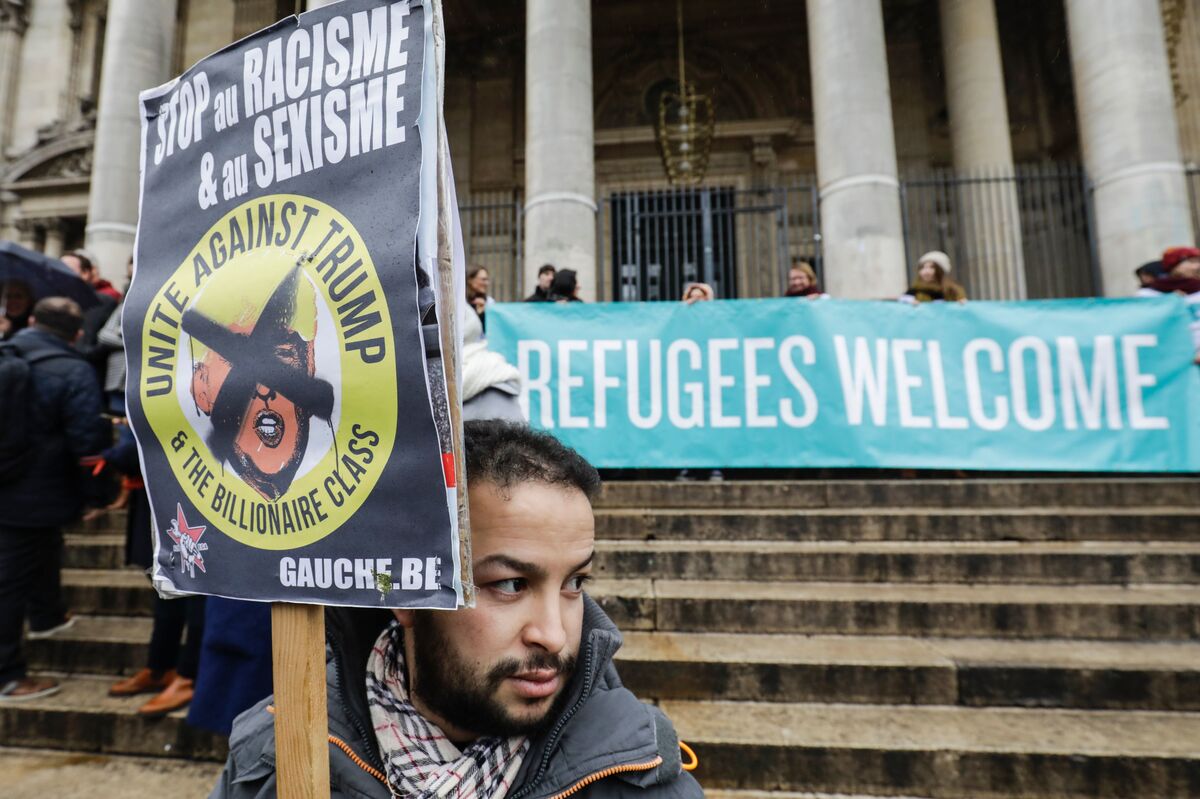 Surprise and a desire for retaliation are some of the reactions to President Trump's temporary ban on travelers from seven Muslim-majority countries.

The ban, abruptly imposed Friday, led the Organization of Islamic Cooperation, a 57-nation body that's based in Saudi Arabia, to call on the U.S. to "maintain its moral obligation to provide leadership and hope at a time of great uncertainty and unrest in the world."

Expressing its "grave concern" about the policy, the group said that refugees "have been adversely and unjustly affected" — and it added that the policy also plays into the hands of extremist groups that have accused the U.S. of waging war on Muslims.

The ban on people traveling from Iraq, Iran, Syria, Yemen, Sudan, Libya and Somalia is slated to last for 90 days. In addition, new refugee admissions are suspended for 120 days and Syrian refugees are banned indefinitely.

Here's a rundown of reactions from countries that now find themselves on an undesirable U.S. list:

"Iraqis seem shocked by the ban" imposed by one of its allies, NPR's Alice Fordham reports on today's Morning Edition.

Parliament has approved a plan for a reciprocal ban on Americans, which would need cabinet approval before taking effect, Alice says. She adds that Iraq's former ambassador to the U.S., Lukman Faily, says he's been told he can't travel to the U.S.

The ban shows "swagger and an arrogance," influential Shiite cleric Muqtada al-Sadr says, noting that Americans are allowed to freely enter many countries — including those on its banned list.

How the order goes over in Iraq is especially important because that country's government has been a key ally to the U.S. in the war on ISIS. Iraq is also home to about 6,000 U.S. troops who are aiding domestic forces on the front line against ISIS.

The Foreign Ministry calls the ban "insulting," while also saying any retaliation will be "proportionate" and will be made "while respecting the American people and differentiating between them and the hostile policies of the U.S. Government."

The country's government so far hasn't released an official response to Friday's order.

However, state-run SANA media highlighted international criticism of Trump's immigration ban and the U.S. president's low approval ratings in a new Gallup poll. SANA cited calls from the international community and American protesters for Trump to reconsider the ban.

A month ago, Syrian President Bashar Assad had praised Trump's approach to terrorism and said that the new U.S. president would be a "natural ally."

As NPR's Deb Amos noted, "More than 50 percent of Muslim refugees admitted to the U.S. last year come from Syria and Somalia."

Attempts to "classify Yemen or its citizens as a possible source of terrorism are illegal and illegitimate," the government says. The Foreign Ministry said that while it is "aware that such action is the sovereign right for the United States, however, identifying specific countries as potential sources of terrorists ... needs more assessment and revision."

Yemen also characterized a deadly U.S. raid that was carried out Sunday as "state terrorism committed by the United States under the pretext of fighting terrorism."

That raid targeting al-Qaida in the Arabian Peninsula resulted in the death of a U.S. service member as well as 14 militants, officials say. But the Pentagon is looking into reports that it also killed women and children — including the 8-year-old granddaughter of Nasser al-Awlaki — a former Yemeni minister of agriculture whose son, killed by the U.S. in 2011, was an al-Qaida proselytizer.

America's envoy in Khartoum was summoned by Sudan's Foreign Ministry to hear the country's protests against Trump's decision, which came at a time of increasing cooperation between the U.S. and Sudan.

Sudan's government has been working to be taken off the U.S. list of state sponsors of terrorism — just weeks ago, President Obama eased economic sanctions against the country that had stood for 20 years.

"The Sudanese citizens living in the United States are known for their good reputation, respect for American laws, and their lack of involvement in radical and criminal acts," the government says.

The government so far doesn't appear to have issued a formal response, but Somali native Mo Farah, a decorated Olympian and British citizen who lives in Portland, Ore., criticized the ban, which he said cast doubt on whether he can return to his family after training in Ethiopia.

Farah said via Facebook: "It's deeply troubling that I will have to tell my children that Daddy might not be able to come home — to explain why the President has introduced a policy that comes from a place of ignorance and prejudice."

Hundreds of thousands of Somali refugees live in Kenya. NPR's Eyder Peralta, citing the U.N.'s refugee agency, reports that some 26,000 Somalis in Kenya are undergoing the official process of trying to gain permission to settle in the U.S. Roughly half have already been interviewed by U.S. immigration officials.

After Trump's election in November, Somalia congratulated the new president and said it hopes to strengthen relations, saying Somalia's government and people "enjoy strong bilateral ties with the USA built on mutual respect, trust and partnership."

We're not seeing an official response from the struggling nation. The ban came weeks before a conference on U.S.-Libya relations is scheduled to be held in Washington, D.C.