Accessibility links
Washington State Sues Trump, Seeking A Stay On Immigration Ban : The Two-Way Saying that President Trump's immigration ban is illegal, the state's lawsuit cites instances in which he said he would base immigration decisions on religion. 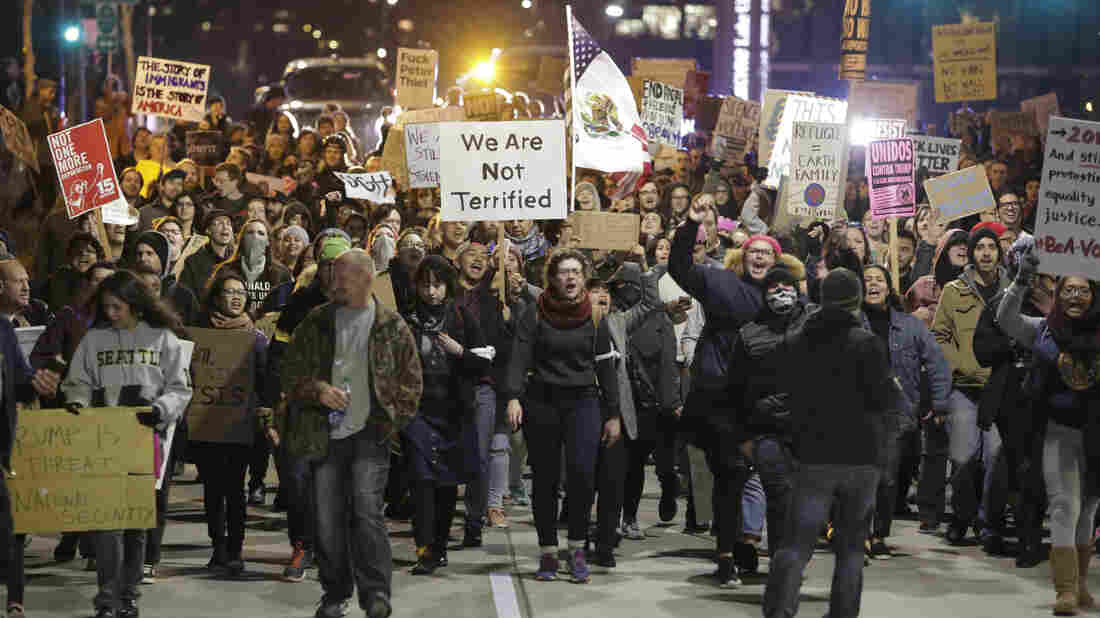 Washington state has filed a lawsuit seeking to block President Trump's order on immigration from Muslim-majority countries. The ban prompted protests over the weekend in Seattle and other cities. Jason Redmond/AFP/Getty Images hide caption 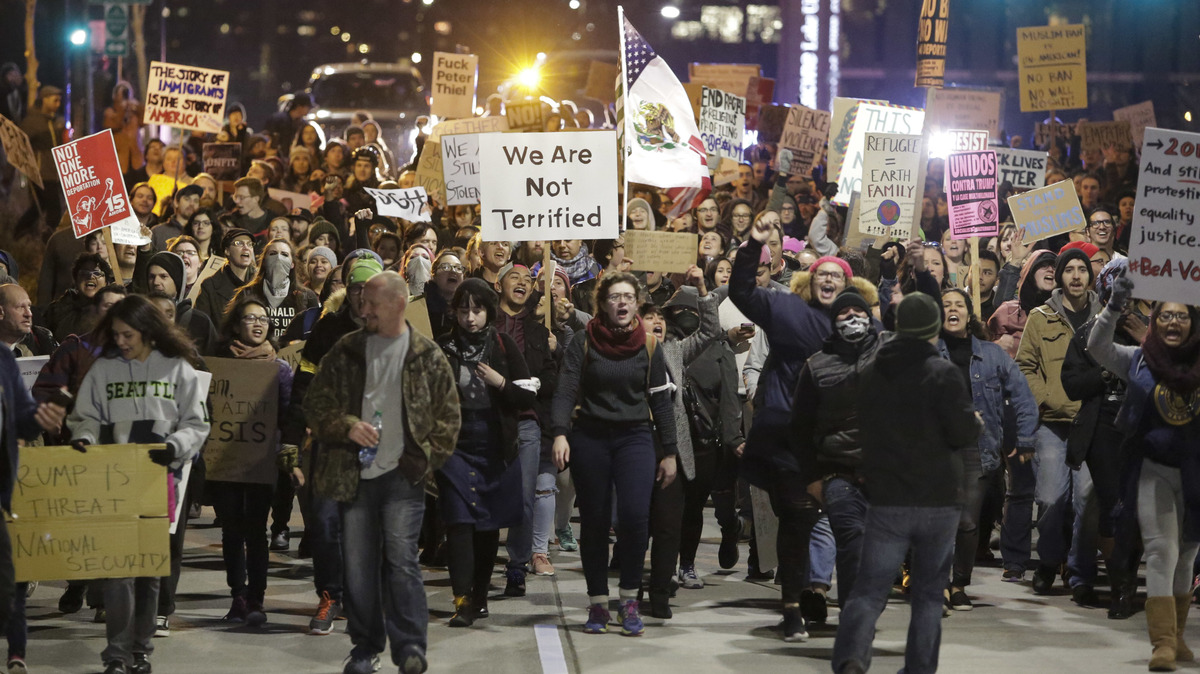 Washington state has filed a lawsuit seeking to block President Trump's order on immigration from Muslim-majority countries. The ban prompted protests over the weekend in Seattle and other cities.

Officials in a number of states have spoken out against President Trump's recent executive actions on immigration. On Monday, Washington state became the first to file a lawsuit against the administration, seeking a restraining order to stop enforcement of the ban.

"If successful it would have the effect of invalidating the president's unlawful action nationwide," Attorney General Bob Ferguson said of the lawsuit, according to member station KNKX. 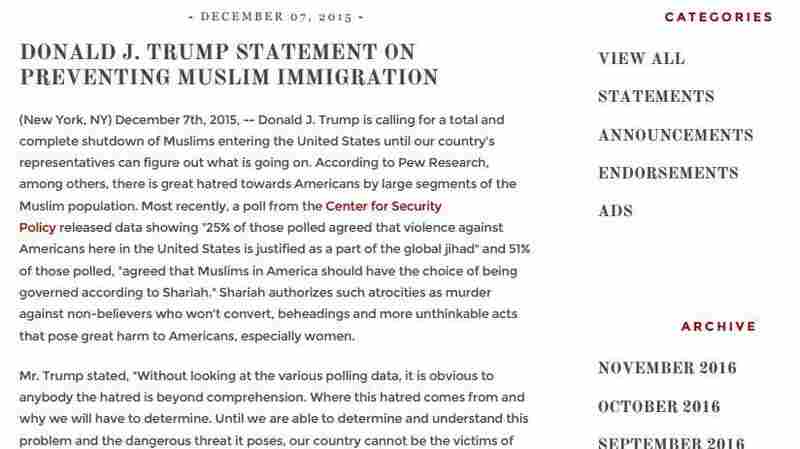 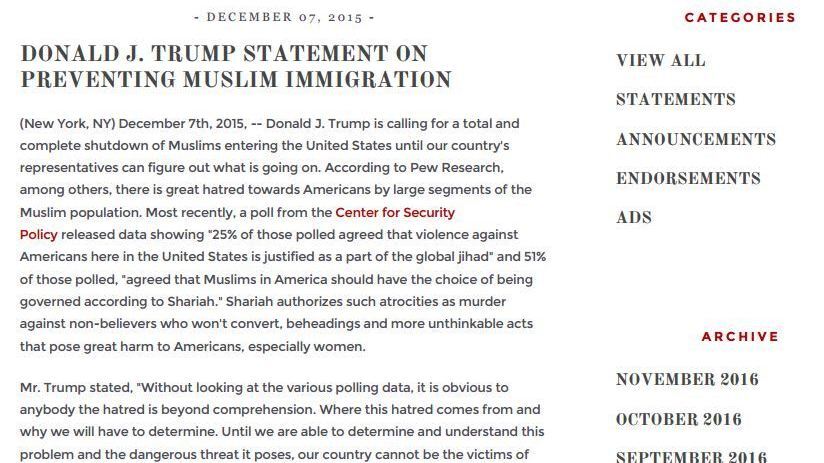 An exhibit in Washington state's lawsuit cited President Trump's plan to ban Muslims, a pledge made in December of 2015.

In its court filings, the attorney general's office included statements Trump made as a candidate dating back as far as December of 2015. That's when his campaign issued a statement titled, "Donald J. Trump Statement on Preventing Muslim Immigration," which called for "a total and complete shutdown of Muslims entering the United States until our country's representatives can figure out what is going on."

Over the weekend, Ferguson was among more than a dozen Democratic attorneys general who signed a statement in which they pledged to fight what they called an "unconstitutional order." Other states are likely to take action against the ban, either on their own or by joining Washington's suit.

In Massachusetts, for instance, Attorney General Maura Healey's office says she is planning to challenge the order; in New York, Attorney General Eric T. Schneiderman's office is filing to join a federal lawsuit against President Trump that was originally filed by the American Civil Liberties Union Foundation.

The Washington lawsuit also includes several media reports and interview transcripts about Trump's ban, including his interview with the Christian Broadcasting Network that was promoted under the headline, "Brody File Exclusive: President Trump Says Persecuted Christians Will Be Given Priority As Refugees."

Filed in federal court in Seattle, the Washington documents include an emergency motion for a temporary restraining order, saying irreparable harm will result from Trump's executive action that bans travel from the seven Muslim-majority countries and suspends the U.S. refugee admissions program.

Announcing his lawsuit against the immigration ban, Ferguson said, "We are a country based on the rule of law and in a courtroom it is not the loudest voice that prevails, it's the Constitution."

When it imposed the immigration ban, the Trump administration cited concerns about potential terrorism threats; it has also noted that only a portion of the world's majority-Muslim countries are on the banned list. But as NPR's Greg Myre reported, the executive order "doesn't include any countries from which radicalized Muslims have actually killed Americans in the U.S. since Sept. 11, 2001."

Trump's action on Friday set off a weekend of protests, legal challenges and confusion as travelers and border security personnel tried to adjust to a new set of rules. And on Monday, after the acting attorney general refused to defend the order, she was fired.

A previous version of this story incorrectly stated that Washington state's lawsuit names President Trump and other U.S. officials as plaintiffs. They are defendants.