Accessibility links
Donations To Burned Texas Mosque Top $1 Million In Outpouring Of Support : The Two-Way The financial support mirrors the Texas community's efforts to support the mosque: Four churches and a synagogue have offered to host Muslim services. 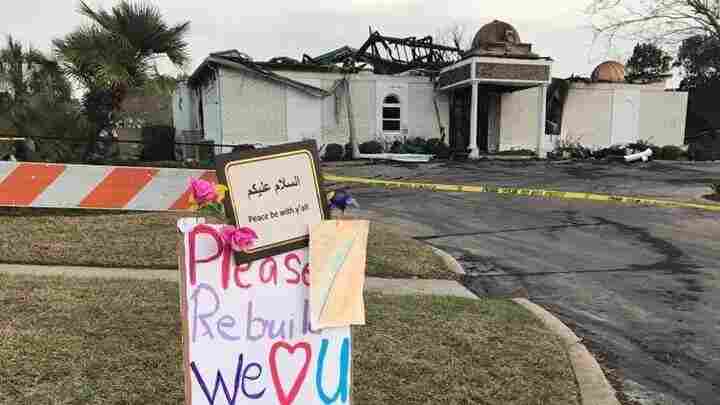 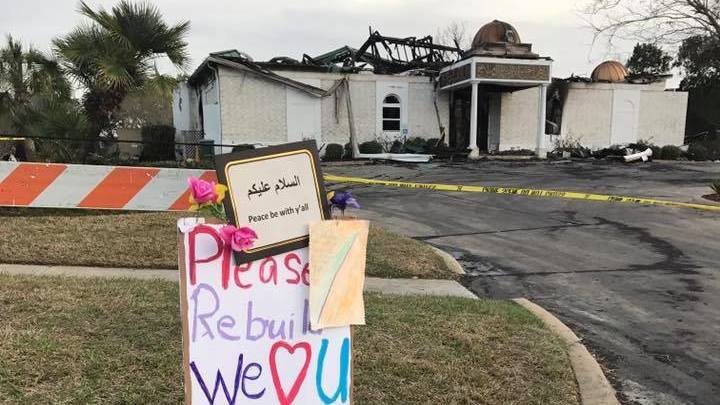 An image from the Victoria Islamic Center shows the mosque after a devastating fire last weekend. The congregation has received support and donations topping $1 million.

Days after fire destroyed the Victoria Islamic Center in Victoria, Texas, donations to rebuild the mosque have passed $1 million. And that's only one part of the support the mosque has received: Four churches and a synagogue say Muslims are welcome to hold services in their buildings.

"Our hearts are filled with gratitude for the tremendous support we've received," wrote campaign organizer Omar Rachid, who attends the mosque. "The outpouring of love, kind words, hugs, helping hands and the financial contributions are examples of the true American Spirit and Humanity at its best with donations coming in from all over the world."

With donations far surpassing the center's goal of $850,000, the fundraising page does indeed show a wide range of donors — including, on Wednesday, a man who described himself as an atheist Jew.

"But I send you my very best wishes and solidarity," the donor, Vincent Graff, wrote. "From one human to another, here's to hope and kindness."

The financial support mirrors the Texas community's efforts to support the mosque and its congregation. Hours after a raging fire gutted the building in the darkness of early Saturday, hundreds of people gathered for a prayer rally at the site. The cause of the fire is still under investigation, though the mosque has previously been targeted by vandals.

With a congregation of fewer than 150 people, the mosque's building was never insured, the Victoria Advocate reports. The newspaper's Jon Wilcox, who reported from the scene as the mosque burned, told Texas Standard that it looked like an inferno. Later, he watched as supporters met to show solidarity.

"The reaction there was just overwhelming," Wilcox said. "Lots of tears. Very emotional. Support at that rally and also outside the rally ... four churches and a synagogue in Victoria have offered the mosque to allow them to use their own property for worship services."

Discussing his synagogue's offer to host Muslim services, Robert Loeb, the president of the town's Temple B'Nai Israel, told the Forward website that in Victoria, "everyone knows everybody. I know several members of the mosque, and we felt for them."

The synagogue's offer prompted a Muslim woman who lives in Texas to write on the temple's Facebook page, "On behalf of the Muslim Community, I would like to thank you." She later added, "I am proud to call you all my brothers and sisters. Thank You!"