Accessibility links
With Trump's Travel Ban Blocked, Visa-Holders, Refugees Scramble to Board Flights : The Two-Way A federal appeals court denied the president's attempt to reinstate his controversial executive order, at least for now. Refugee groups are seizing the opportunity and booking plane tickets. 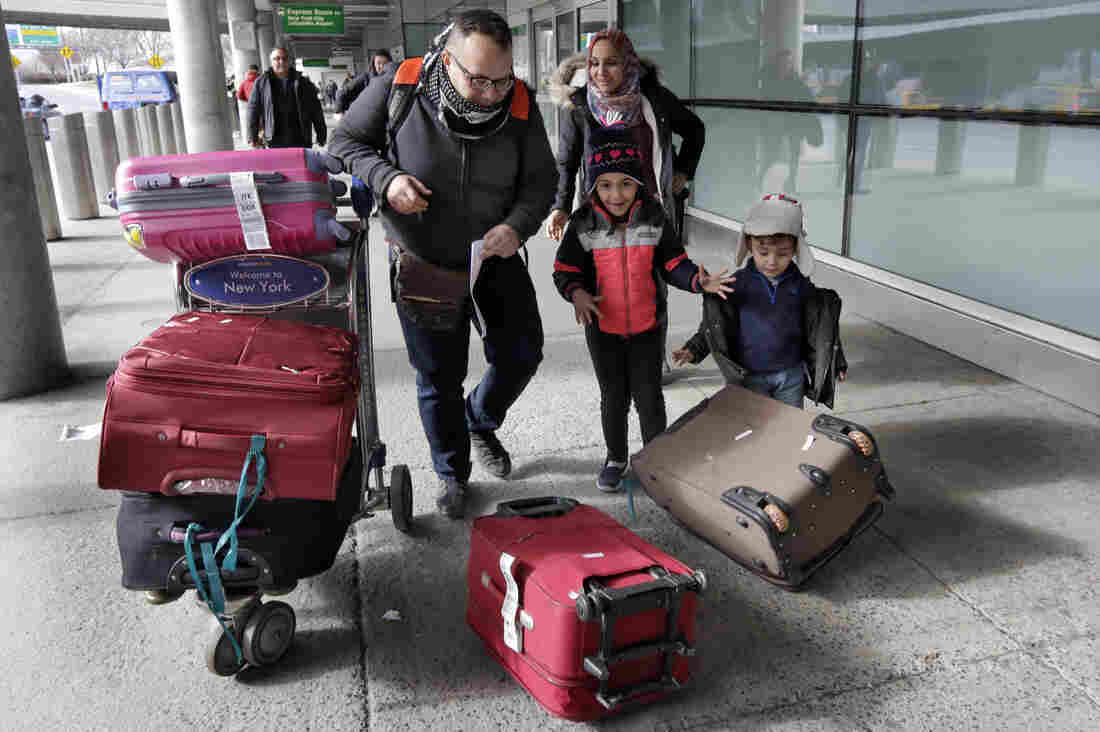 Munther Alaskry, accompanied by his wife, Hiba; son, Hassan; and daughter, Dima, gather their luggage as they leave JFK International Airport in New York on Feb. 3. Alaskry and his family arrived after the Trump administration reversed course and said he and other interpreters who had supported the U.S. military could come to America. Richard Drew/AP hide caption 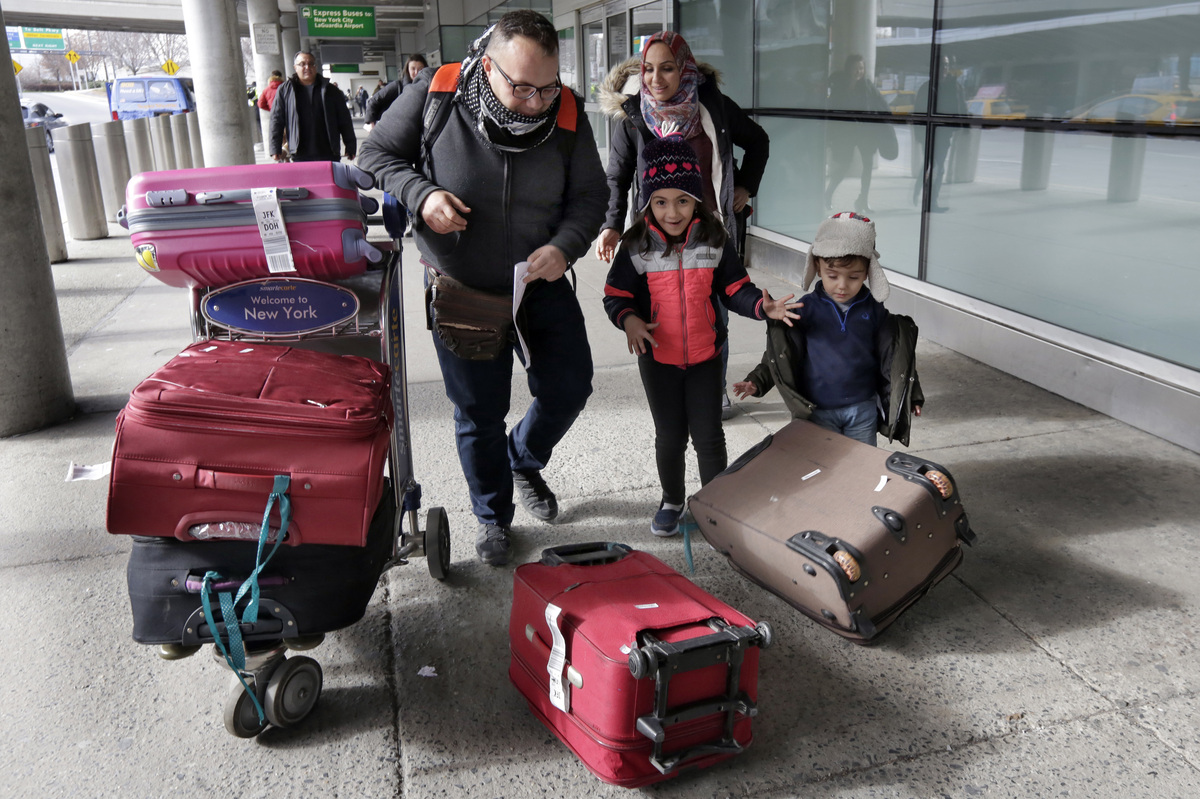 Munther Alaskry, accompanied by his wife, Hiba; son, Hassan; and daughter, Dima, gather their luggage as they leave JFK International Airport in New York on Feb. 3. Alaskry and his family arrived after the Trump administration reversed course and said he and other interpreters who had supported the U.S. military could come to America.

A federal appeals court denied President Trump's attempt to restore his travel ban on refugees and visa holders from seven majority-Muslim countries Sunday morning, sending people scrambling to board planes while it is legal once again for them to enter the country.

The court set a timeline for the next developments, while also denying the immediate stay Trump asked for as part of his appeal against a Seattle judge's ruling that suspended the president's travel ban on Friday.

The U.S. Court of Appeals for the 9th Circuit has asked those opposed to the ban to file their opposition to Trump's appeal by 3 a.m. ET Monday (11:59 p.m. PT Sunday), and for the Justice Department, representing Trump's administration, to reply to that by 6 p.m. ET Monday.

For now, however, previously approved refugees and green card holders from the seven countries listed in the ban are able once again to enter the U.S.

William Lacey Swing, the director general of the United Nations International Organization for Migration, told NPR his agency is hoping to resettle between 1,800 and 2,000 refugees who had already been approved prior to the ban.

"It's quite complex now," Swing told NPR's Lulu Garcia-Navarro on Sunday. "But you can be sure from our side that we're going to do everything possible to get them on those flights, to take advantage of this window of opportunity ... unless of course, the courts change things once more."

Airport officials in Cairo say a total of 33 U.S.-bound migrants from Yemen, Syria and Iraq have boarded flights on their way to the United States, according to The Associated Press. The 33 hadn't previously been turned away, but were migrants rushing to take advantage of the window offered by the Sunday ruling.

Ahmed al-Durah, an accountant from Damascus with two daughters, a 3-year-old and a 10-month-old, told NPR they were driving to the airport in Amman last week from the northern Jordanian city of Irbid when they received a call telling them their flight was canceled.

The IOM called again Sunday asking if he would be willing to leave for the U.S. on Monday.

"I told them of course, I'm ready," Durah said. "I sold everything and our bags are still packed."

By Sunday afternoon, the family was booked on a flight scheduled to leave Monday morning. He said his wife's uncle in Atlanta had rented a house for them there and paid the rent six months in advance.

Travel Ban Keeps Scientists Out of the Lab

It was less clear whether the IOM in Lebanon was starting to reschedule flights for refugees.

Amin Khayat had been scheduled to leave on Friday for Detroit with his wife, five children and his 77-year-old mother, who has cancer.

"They stopped her chemotherapy because we were traveling and then when the flight was canceled, the hospital said it was sorry but it couldn't restart it," Khayat told NPR by phone from Beirut.

Khayat is an electronics repairman from Damascus and said he had given up their rented apartment and taken the children out of school.

He said he tried calling the IOM on Sunday, but since it was a weekend, he couldn't reach anyone.

Iraqis accepted for resettlement under a special program for military interpreters and employees of U.S. companies in Iraq were told earlier in the week they were cleared to leave. 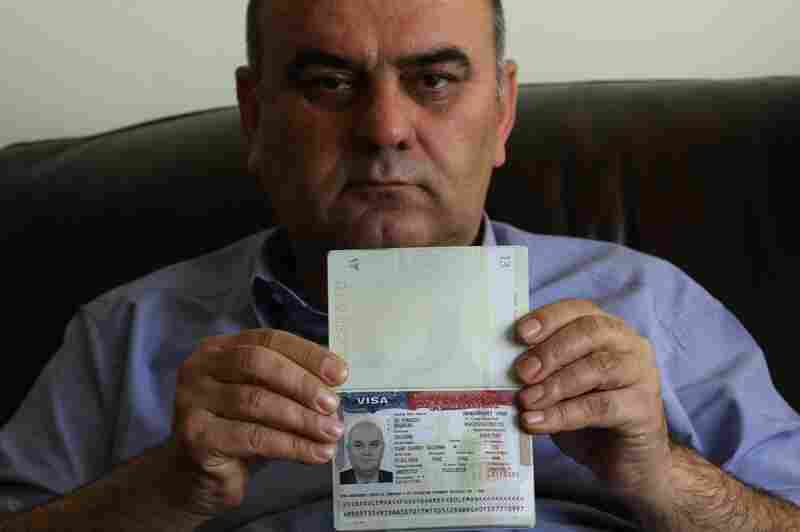 Fuad Sharif Suleman shows his U.S. immigrant visa in Irbil, Iraq, on Jan. 30, after returning to Iraq from Egypt, where he and his family were prevented from boarding a plane to the U.S. following President Trump's decision to temporarily bar travelers from seven countries, including Iraq. Safin Hamed/AFP/Getty Images hide caption 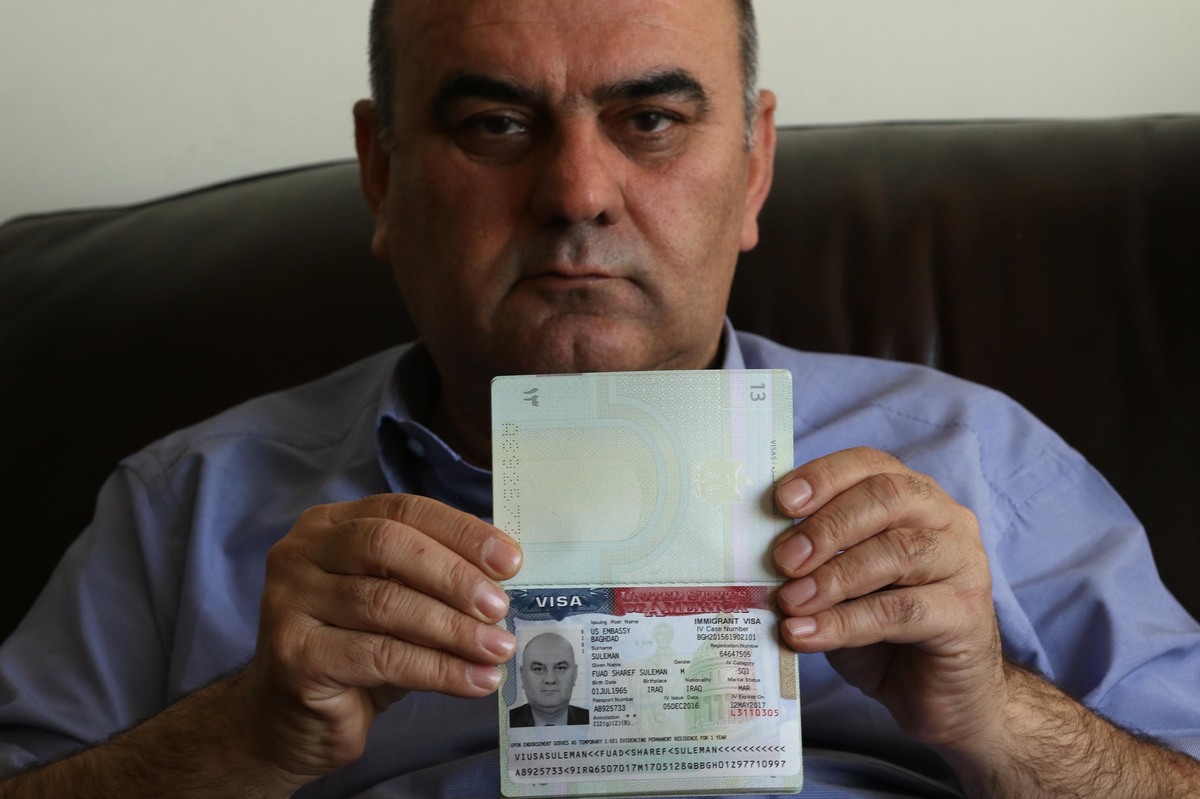 Fuad Sharif Suleman shows his U.S. immigrant visa in Irbil, Iraq, on Jan. 30, after returning to Iraq from Egypt, where he and his family were prevented from boarding a plane to the U.S. following President Trump's decision to temporarily bar travelers from seven countries, including Iraq.

"The embassy called me and said it was OK for me and others like me to travel," said Fuad Sharif Suleman, an Iraqi Kurd deported back to Iraq last week from Cairo while he and his family were en route to New York.

Reached by telephone just before he boarded the plane in Irbil early Saturday, Suleman said his children — ages 19, 17 and 10 — were a little bit nervous but excited about their new home in Nashville, Tenn.

Suleman said there had been an outpouring of support in the U.S. after he was sent back to Iraq. "I had friends in Nashville, but now I have a lot more," he told NPR.

President Trump and his administration's response

Trump hasn't said anything publicly Sunday about the federal court's decision to deny his stay request. He penned a flurry of tweets Saturday, however, aimed at Seattle Judge James L. Robart and his original decision to temporarily lift the travel ban while a case brought by the states of Washington and Minnesota is heard.

The judge opens up our country to potential terrorists and others that do not have our best interests at heart. Bad people are very happy!

The tweet illustrates a key difference in opinion between Trump and his supporters, and the people working to vet and place refugees in America.

Swing, the director general of the IOM, said it's hard for him to imagine a stricter vetting process than the one already in place prior to the ban. The refugees he is hoping to relocate to the U.S. while the travel ban is lifted have already made it through that process.

Where Does Your Member Of Congress Stand On Trump's Immigration Order?

"You have eight U.S. government agencies who are vetting them," said Swing. "They are looking at six different security databases, they're doing five different background checks. They have three separate in-person interviews, and then two inner-agency reviews of all that.

"So far, the problem has been that since 9/11 the security has been so strict that you're talking about at least 18 months until you can travel."

The White House obviously sees it differently. In a statement on Friday, Trump's administration announced its intention to appeal the decision to lift the ban, adding, "The president's order is intended to protect the homeland and he has the constitutional authority and responsibility to protect the American people."

Trump on immigration appeal: "We'll win. For the safety of the country we'll win." pic.twitter.com/ffOPCgtPBv

More than a dozen legal challenges have been filed against the ban around the country, according to The Washington Post, and just one judge, U.S. District Judge Nathan Gorton, has indicated he was willing to let Trump's order stand.

Reporters asked Trump about the appeal outside his private Mar-a-Lago resort in Florida, on Saturday night.

"We'll win," he said, and briefly paused. "For the safety of our country, we'll win."

You can find the court documents related to the Trump administration's appeal and the original decision to temporarily lift the ban here.