Accessibility links
For Afghan Children, A Year Even More Brutal Than The Last : The Two-Way The United Nations reports the number of children killed and wounded rose 24 percent in 2016, and that all sides, including the U.S., are to blame for leaving unexploded ordnance in civilian areas.

For Afghan Children, A Year Even More Brutal Than The Last

For Afghan Children, A Year Even More Brutal Than The Last 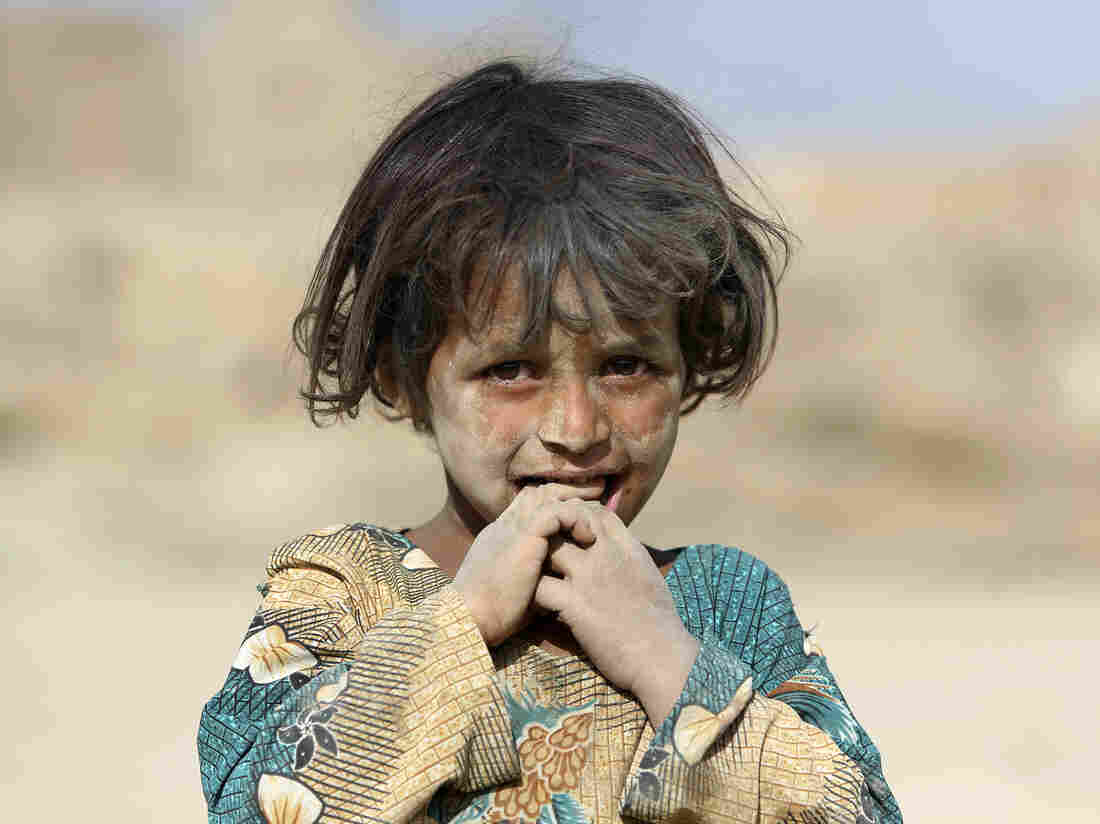 An Afghan girl on the outskirts of Kabul, Afghanistan, in October 2016. The U.N. mission in Afghanistan says the number of children killed or wounded increased 24 percent last year. Rahmat Gul/AP hide caption 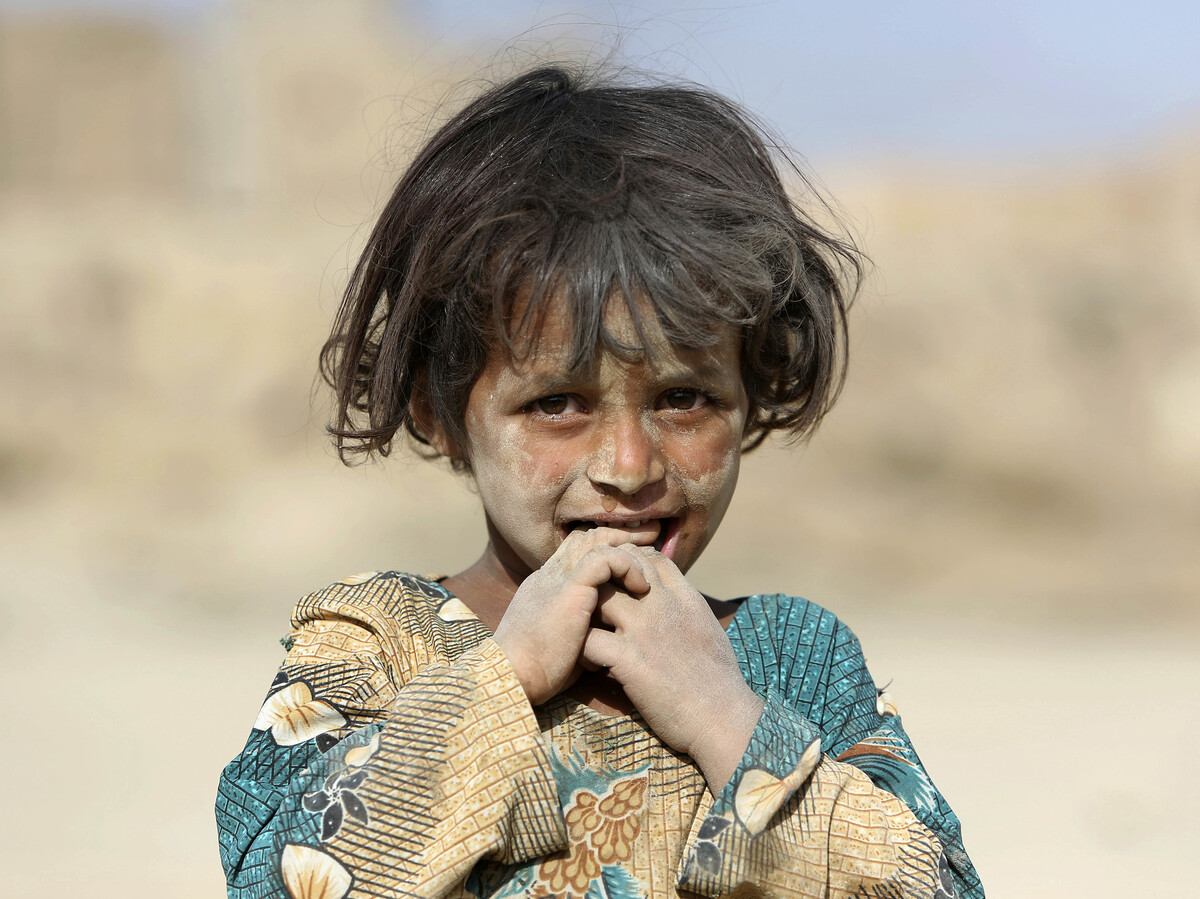 An Afghan girl on the outskirts of Kabul, Afghanistan, in October 2016. The U.N. mission in Afghanistan says the number of children killed or wounded increased 24 percent last year.

In Afghanistan, the number of civilian casualties reached an all-time high in 2016, the United Nations reported Monday.

Nearly 11,500 civilians were killed and wounded in the country last year — including more than 3,500 children. It is an overall increase of 3 percent compared with 2015, which was the previous record-high since the U.N. began systematic documentation in 2009.

Among children, the latest numbers represent a staggering 24 percent increase in injuries and deaths.

Most of those child casualties came from fighting between different groups in heavily populated areas; however, there was also a sharp increase because of unexploded land mines, rockets and other remnants of war.

"The U.N. blamed most of the civilian casualties on the Taliban, but it also documents an increasing number of attacks perpetrated by a so-called franchise of Daesh or ISIS," Lisa Schlein reported for NPR's Newscast unit.

"After nearly 40 years of conflict in Afghanistan, U.N. officials warn Daesh is now surfacing as another deadly element in this endless war," Schlein reported.

The rise of ISIS-affiliated militants only adds another layer of instability and violence to what was already a brutal war between the government and militants. 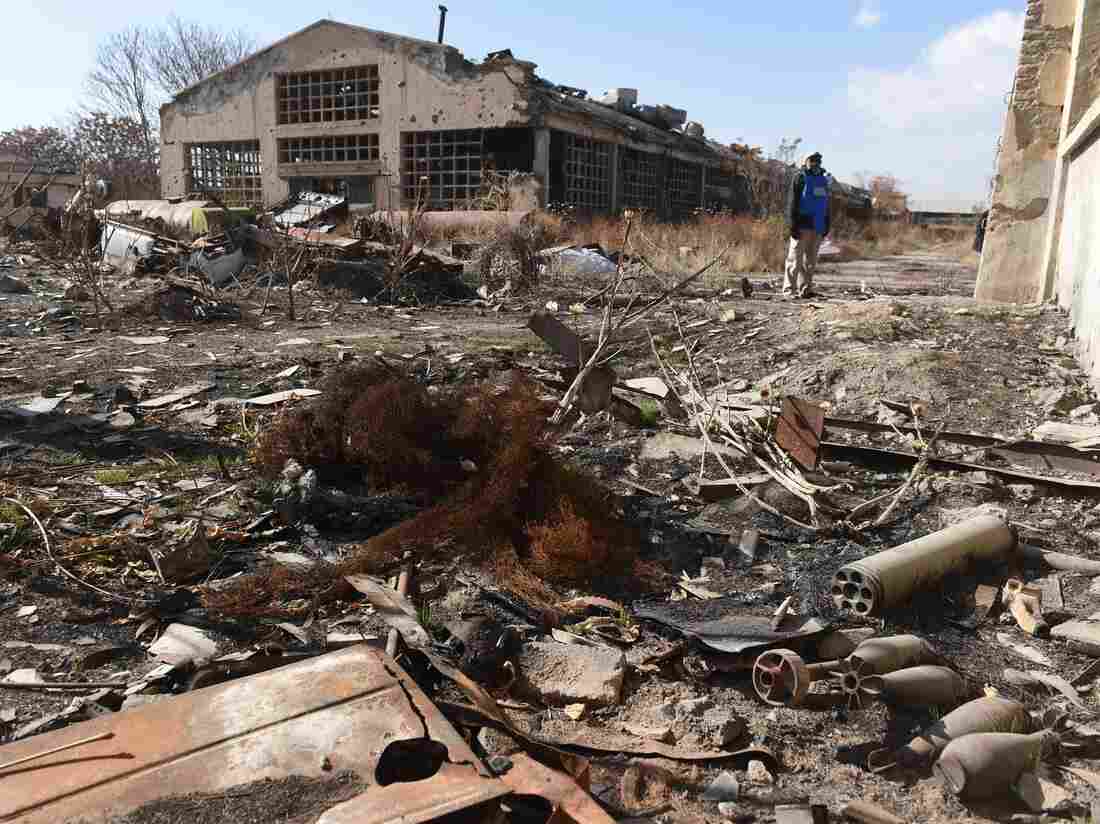 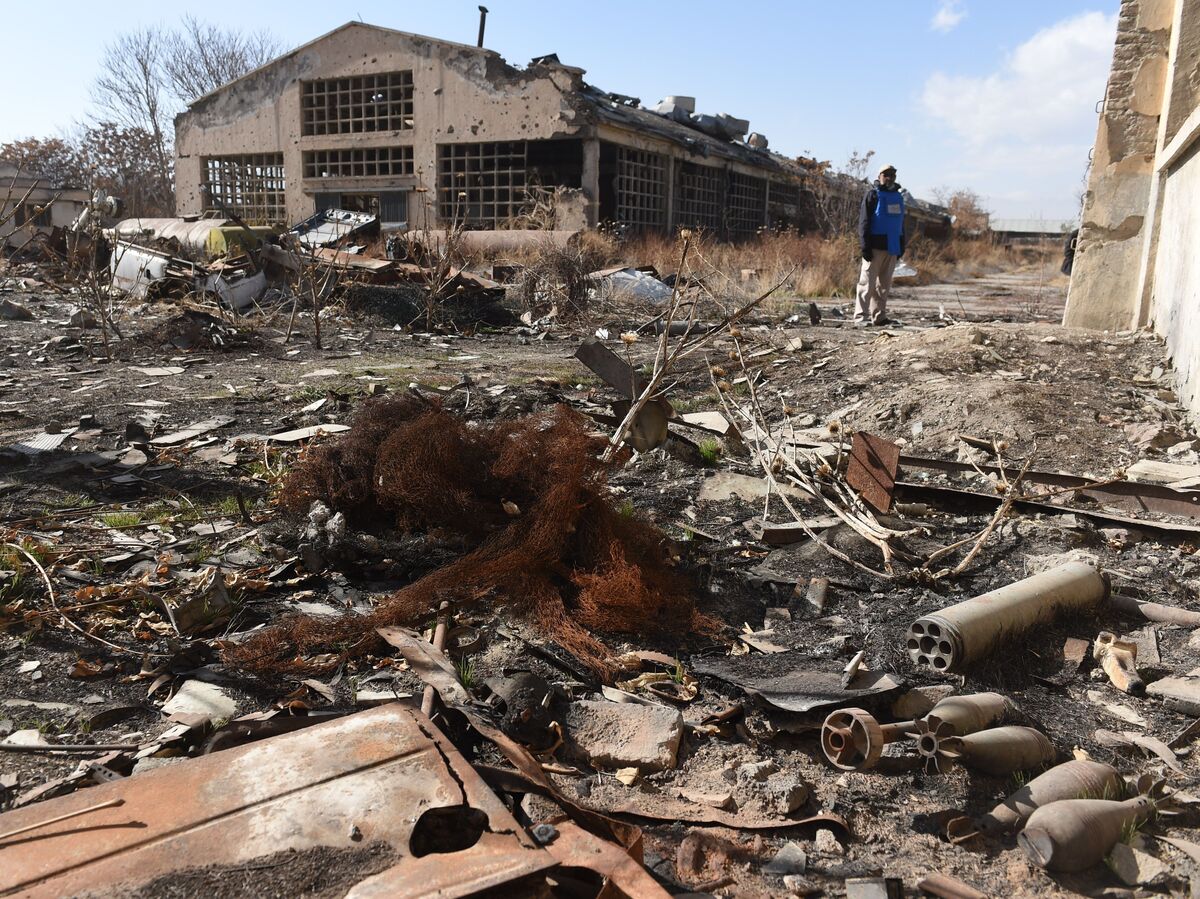 Landmines, shells and rockets south of Kabul in 2014. The U.N. says unexploded ordnance left mostly by NATO and Afghan forces and the Taliban continue to kill and maim children.

The report highlighted one incident in particular, questioning whether NATO airstrikes in a densely populated part of the city of Kunduz in November 2016 complied with international humanitarian law:

"International humanitarian law obliges all parties to the conflict to do everything feasible to cancel or suspend an attack if it becomes apparent that the target is not a military objective or the attack may be expected to cause disproportionate harm to civilians.

"In this regard, the use of airstrikes in a densely populated village during the night that resulted in 68 civilian casualties, including the deaths of 26 women and children and the injury of 23 others raises serious concerns."

"On 17 October, I was walking in my village when I heard a horrible explosion," a 15-year-old boy from Kunduz told U.N. investigators, who included his words in their report. "I really don't know what happened. Now I realize I have lost one of my legs. My brother says I was injured as a result of a pressure-plate improvised explosive device detonation."

The U.N. secretary-general's special representative for Afghanistan, Tadamichi Yamamoto, said at a news conference Monday that he was "particularly concerned" about the dramatic increase in the number of children being injured and killed by fighting, and also by unexploded landmines, shells and rockets left behind in populated areas.

"Yesterday, I was playing with other children on the streets near our house in the village. I saw our neighbor, a boy who later died, holding something made of metal. I knew that it was something explosive. He told all of us 'I'm going to detonate it.'

"I slapped him on his face and told him 'don't do it!' and then I moved further away from him. He began hitting the object with a stone. It exploded. I fell unconscious and I don't know what happened next."

The explosion killed four children and injured three more, including the girl who recounted the story.

"The disproportionate rise in child casualties resulted mainly from an overall 66 percent increase in civilian casualties from unexploded remnants of war," explained Danielle Bell, the human rights director for the U.N. mission to Afghanistan. Bell said the vast majority — 86 percent — of people killed and injured by so-called unexploded ordnance were children. 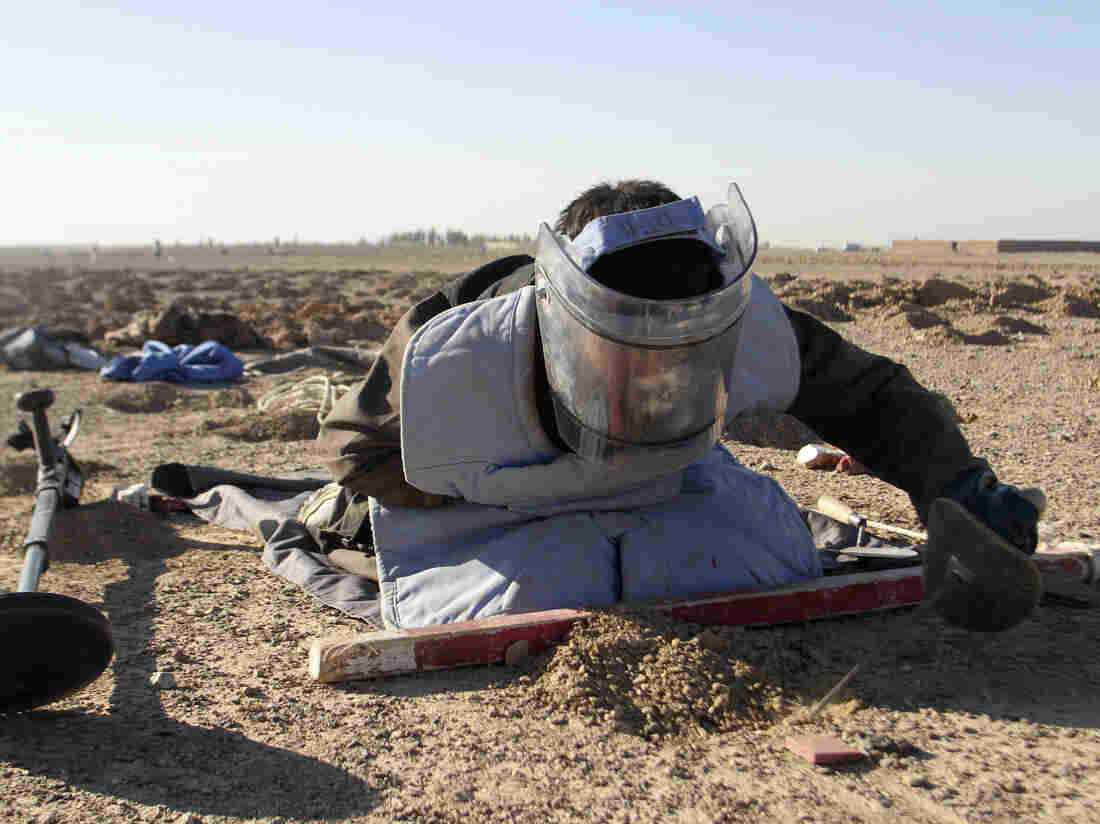 An Afghan worker searches for land mines in the Zhari district of Kandahar province in southern Afghanistan on Jan. 9. Allauddin Khan/AP hide caption 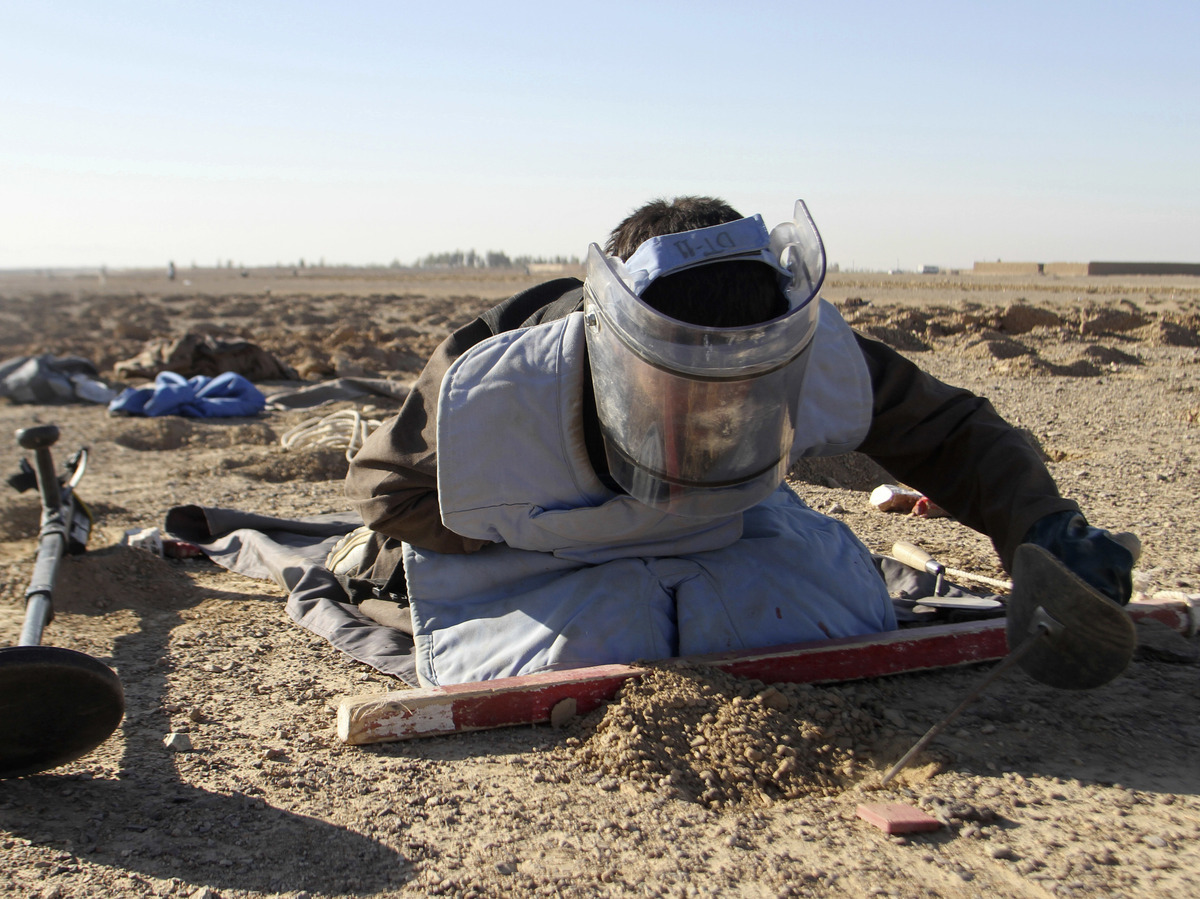 An Afghan worker searches for land mines in the Zhari district of Kandahar province in southern Afghanistan on Jan. 9.

Because Afghanistan has suffered back-to-back conflicts for decades, there are unexploded military remnants from multiple conflicts. But Bell and her team found a direct correlation between casualties from exploded ordinance and areas with the heaviest ground fighting in recent years, and concluded that the majority of casualties were the result of military remnants from the conflict that began with the U.S.-led invasion in 2001.

The Afghan government has taken steps to identify and remove landmines and other leftover explosives, including government-supported demining teams. However, the U.N. report found 20 incidents of violence against deminers last year by Taliban and ISIS-affiliated militants, which "hindered demining efforts, creating further risks for civilian communities."