Accessibility links
Trump Travel Ban: 5 Questions After Hearing The Oral Arguments : The Two-Way On Tuesday night, lawyers debated the temporary suspension of the president's travel ban. The arguments raised issues about the limits of executive power and the constitutional rights of noncitizens. 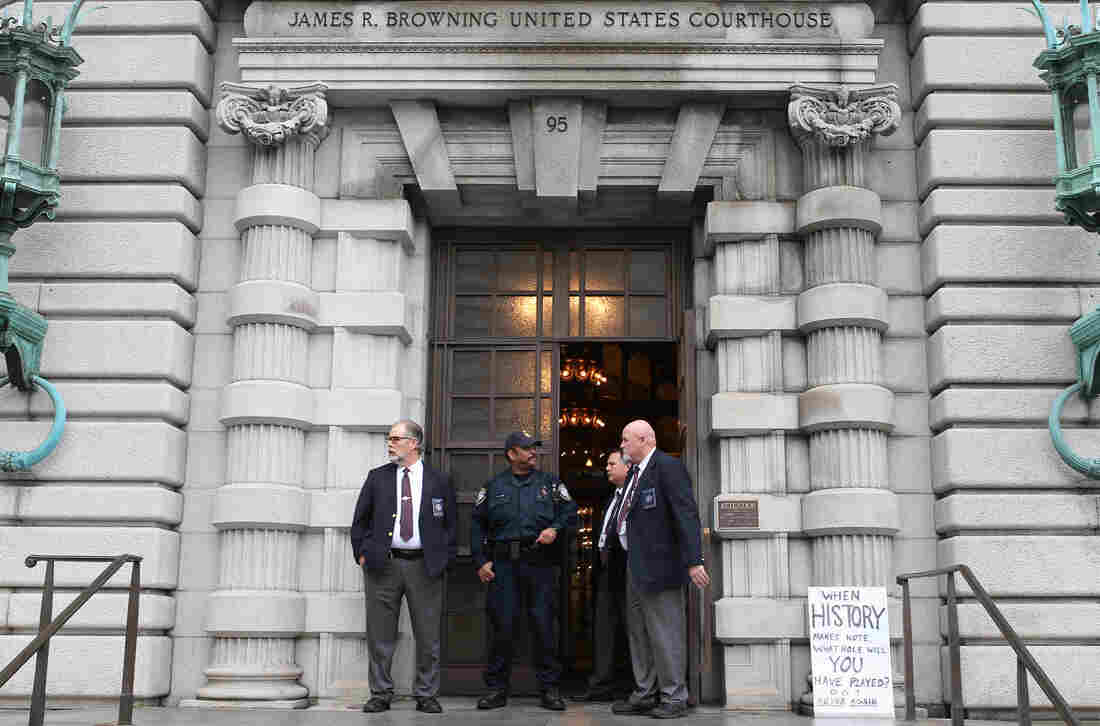 Opponents of President Trump's executive order imposing a temporary immigration ban on seven Muslim-majority nations protest outside a federal appeals court in San Francisco on Tuesday. A three-judge panel heard oral arguments and will now decide whether to lift the stay or leave it in place. Elijah Nouvelage/Getty Images hide caption 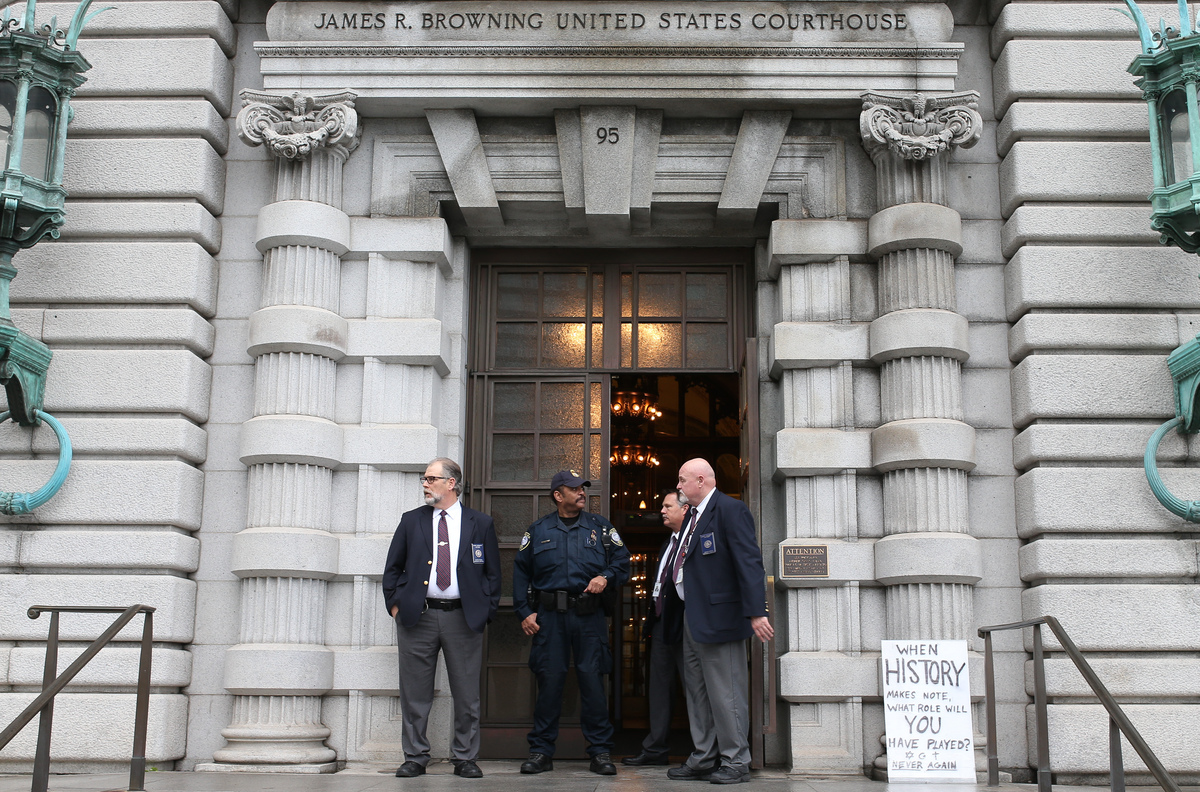 Opponents of President Trump's executive order imposing a temporary immigration ban on seven Muslim-majority nations protest outside a federal appeals court in San Francisco on Tuesday. A three-judge panel heard oral arguments and will now decide whether to lift the stay or leave it in place.

The case centers on President Trump's controversial executive order that would temporarily bar all new refugees from entering the U.S., as well as visa holders from seven majority-Muslim countries.

Those restrictions are currently not being enforced, after a federal judge granted the states of Washington and Minnesota a temporary restraining order blocking the travel ban from going into effect. It was that temporary restraining order — not the travel ban itself — that was being debated in the arguments Tuesday night before three judges on the 9th U.S. Circuit Court of Appeals.

But along the way, the lawyers and judges raised a number of larger issues — some of which, for the many nonlawyers listening along, might require a little context or explanation.

Here are a few key questions that were raised, directly or indirectly, during the arguments:

How many Muslims would be affected by the travel ban? (And does it matter?)

Clifton's "quick penciling," as he described it during the hearing, is close. Iran, Iraq, Libya, Somalia, Sudan, Syria and Yemen made up just more than 12 percent of the world's Muslim population in 2010, based on NPR's analysis of the latest data compiled by the Pew Research Center.

During the hearing, Clifton questioned whether the travel ban could be considered religious discrimination against Muslims if the majority of Muslims worldwide were not affected. Here's how Washington state Solicitor General Noah Purcell responded:

"Your honor, the case law from this court and from the Supreme Court is very clear that to prove religious discrimination, we do not need to prove that this order harms only Muslims or that it harms every Muslim. We just need to prove that it was motivated in part by a desire to harm Muslims."

Laurence Tribe, a constitutional law professor at Harvard Law School, says there is case law that backs up Purcell's argument. "There is no precedent for the ridiculous suggestion that discrimination against members of a religious group becomes constitutionally acceptable whenever only a small percentage of that religious group is victimized," Tribe tells NPR. "The entire course of jurisprudence under the Religion Clauses is incompatible with any such arithmetic approach to the issue."

What rights do noncitizens have under the U.S. Constitution?

As he wrapped up his initial remarks, August Flentje, special counsel to the assistant attorney general, said that in some cases, noncitizens have "no rights" that the state of Washington could try to protect.

"At one end of the spectrum someone who's never been to the United States, even for visiting Disney World, really has no rights," he tells NPR. "On the other end of the spectrum would be somebody who's been given a green card ... they have a lot of constitutional rights."

But it's more complicated than that. It matters where someone is. Someone in the U.S. — even illegally — has constitutional rights, such as the right to due process and the freedoms under the First Amendment, Yale-Loehr says. Even people who aren't in the U.S. and never have been might have ties to a U.S. resident or citizen who has rights of his own — as the state of Washington pointed out in its arguments.

What are the limits of presidential power?

The Department of Justice argues that the president has broad powers when it comes to immigration and national security. In court filings, and again in oral arguments, the DOJ suggested that it was inappropriate for judges to "second-guess" the president's judgment on national security issues.

But the judges seemed to be interested in the limits of those presidential powers, as well as when "second-guessing" would be called for.

"Could the president simply say in the order, we're not gonna let any Muslims in?" asked Judge William Canby. Flentje replied several times that that's not what Trump's executive order does.

"I know that," Canby said. "But could he do that?" He kept pushing for an answer to his hypothetical question.

Flentje conceded that a different plaintiff — specifically, a "U.S. citizen with a connection with someone seeking entry" — might be able to sue for religious discrimination in that situation.

What proof is there that Trump's travel ban is motivated by concerns over terrorism — and what evidence that it's meant to block Muslims?

The Justice Department argues that the temporary travel ban on travelers from seven mostly Muslim countries is necessary to protect U.S. national security. But Judge Michelle Friedland pushed the government to support that claim.

"Has the government pointed to any evidence connecting these countries with terrorism?" Friedland asked the Justice Department's lawyer.

Flentje said that there is no such evidence on the record in this case. But he did mention al-Shabab, an Islamic militant group based in East Africa that the U.S. government considers a terrorist organization. And he pointed out that Congress and the Obama administration had already authorized heightened security for visitors from these countries.

Meanwhile, when Purcell argued on behalf of the states, Clifton asked him to lay out evidence for the states' allegation that the order, which doesn't mention Islam or Muslims by name, is actually motivated by religious bias.

Purcell had described the evidence of intent as "rather shocking" but didn't go into detail. Friedland pointed out that the state included evidence in its briefs — including remarks from Trump associate Rudy Giuliani about what he said was the administration's desire to impose a Muslim ban "legally."

While Tuesday's hearing veered into questions of constitutional law, the federal appeals judges are deciding only whether to reinstate Trump's travel ban while the legal battle over his executive order continues.

The 9th Circuit panel said it won't be making a decision on Wednesday, but the ruling could come later this week.

If the three-judge panel decides to bring the travel ban back, lawyers for Washington state and Minnesota could ask a lower court to grant a preliminary injunction to, again, suspend the ban, which could be issued as early as Feb. 18, according to this court filing.

Regardless of what the appeals judges decide, the case is likely to end up before the U.S. Supreme Court.