Accessibility links
Crab Teases Anemone, Anemone Splits In Two, Crab And Anemone Live On : The Two-Way Researchers have found the first known case of one animal, a boxer crab, stimulating another animal, a sea anemone, to reproduce asexually. 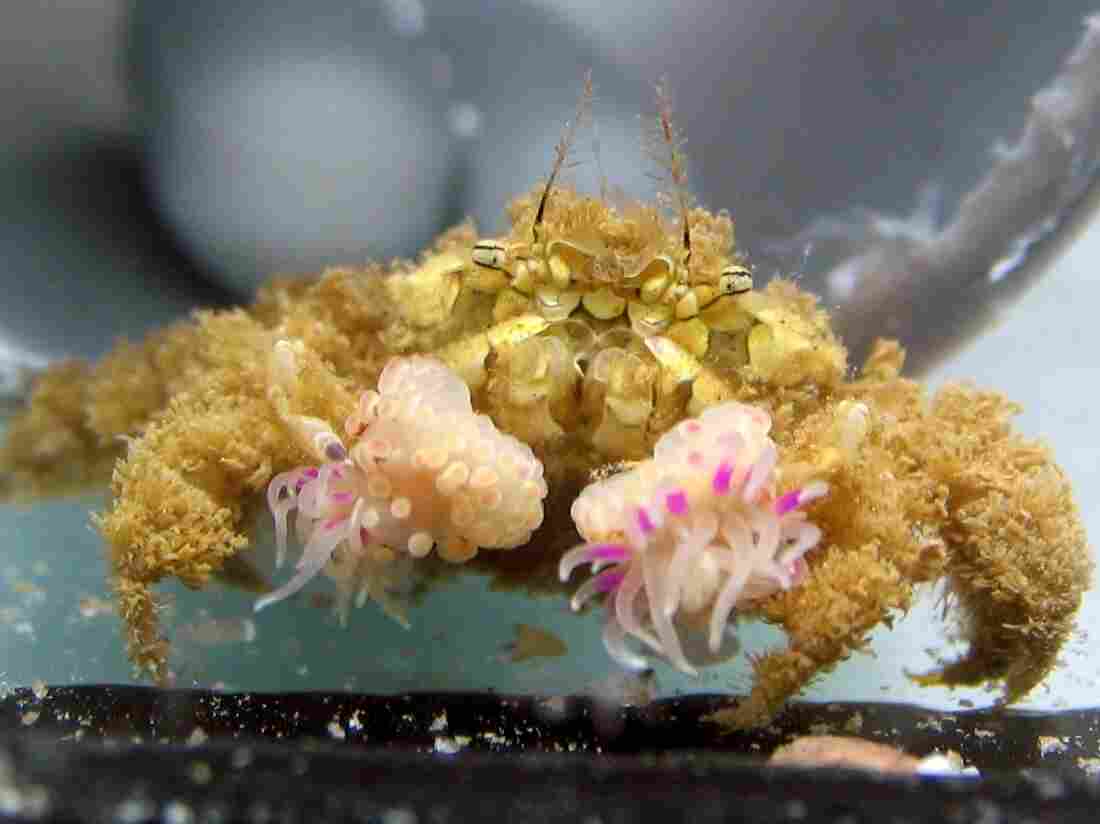 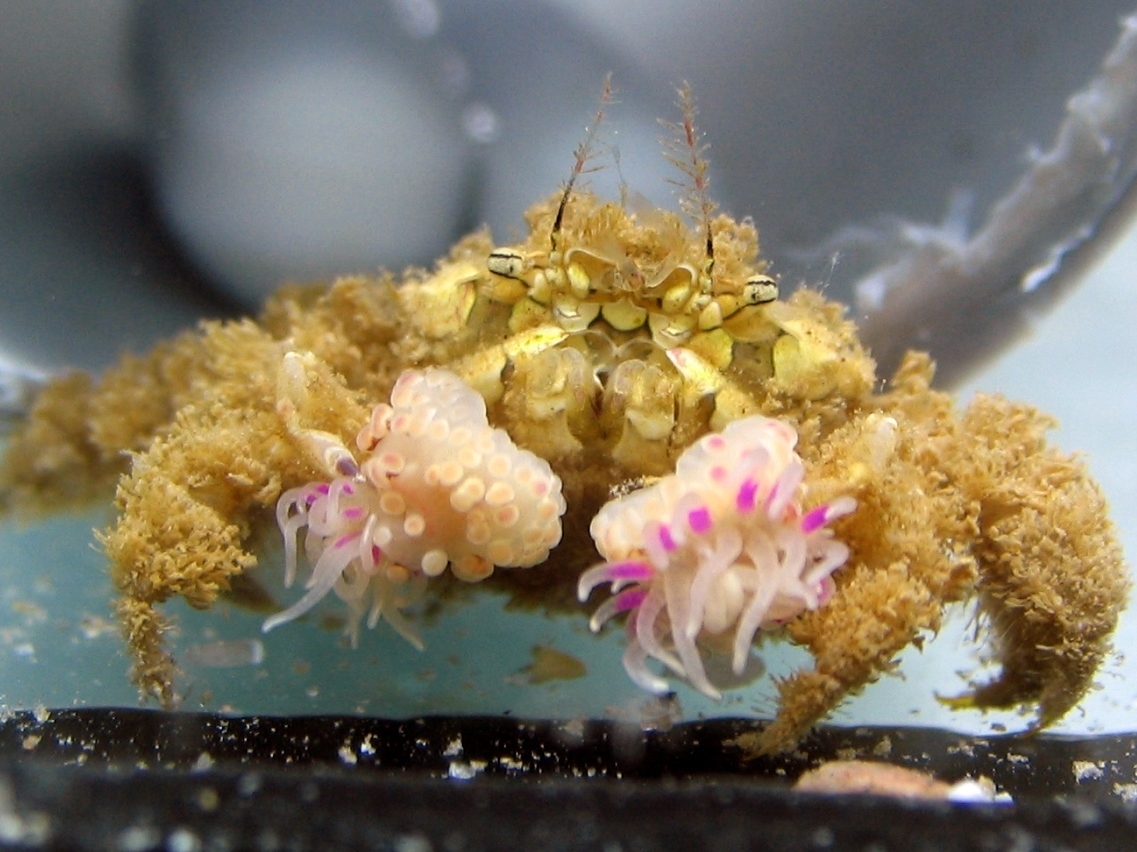 A wild-caught Lybia leptochelis crab holding an anemone in each claw.

Researchers have identified the first known example of one animal, a boxer crab, stimulating another animal, a sea anemone, to reproduce asexually.

From the outside, it's a bit of an abusive situation.

The crabs and anemones have a symbiotic relationship. The anemones live on the delicate front claws of the crabs, protecting the claws and helping the crab mop up bits of food. The benefit to the anemone is less clear — the crab controls how much food its sea anemones get, maintaining them as small "bonsai" versions.

"For the crab, we can say with almost certainty that the crab is dependent on the anemone," explains lead author Yisrael Schnytzer, who is now at the Marine Biological Laboratory in Woods Hole, Mass. "For the anemone, it is more unclear."

And yet, the two animals are virtually inseparable.

For their research into the relationship, Schnytzer and his team gathered more than 100 boxer crabs, and all had sea anemones on their claws.

In a paper published in the most recent issue of the journal PeerJ, they tested how boxer crabs acquire and maintain those anemones.

In one experiment, they took 22 boxer crabs collected from the Red Sea and removed the sea anemone from one claw on each animal.

Then, they watched what happened. 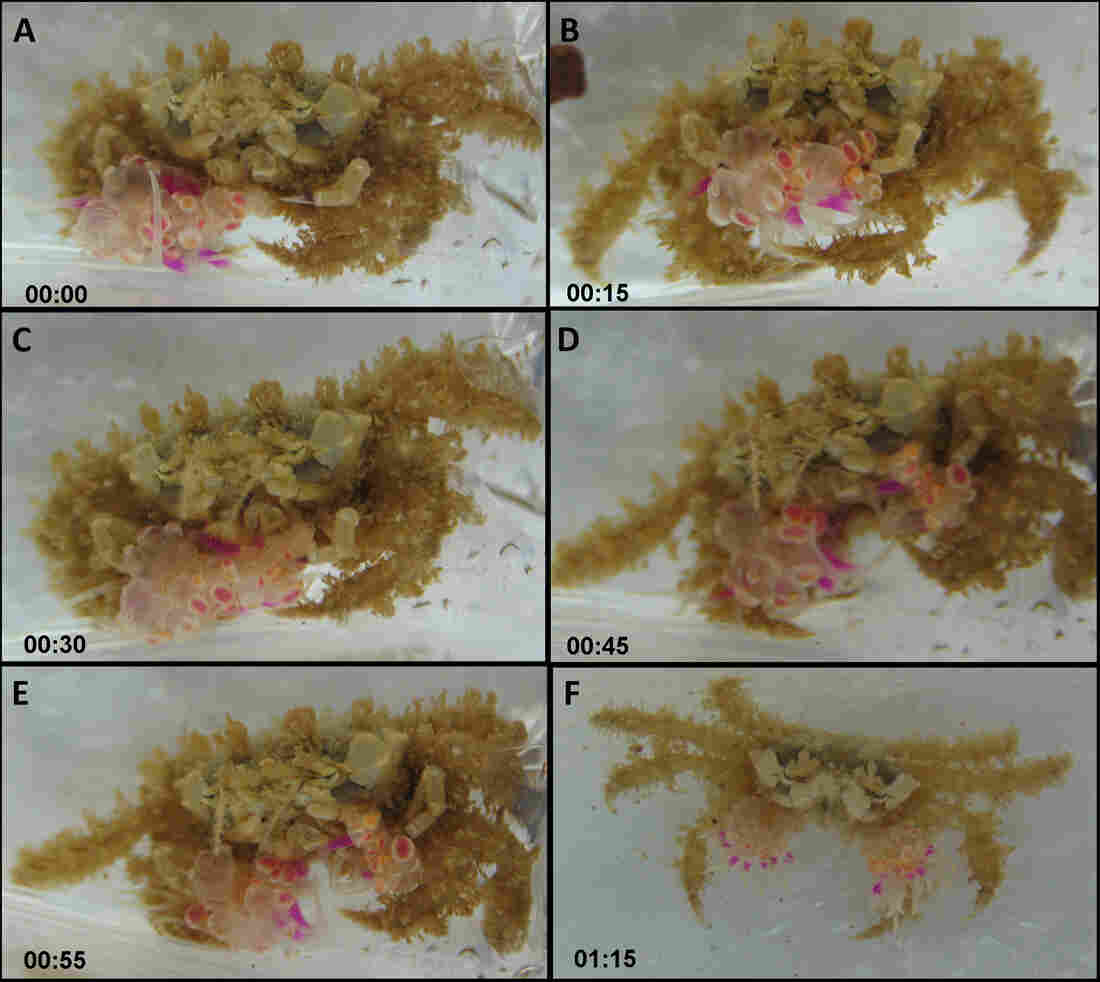 The 1.2 hour splitting process, beginning with a crab holding an anemone in one claw. The crab proceeds to stretch and split the anemone into two, ending with one on each claw. Yisrael Schnytzer hide caption

The crab split its one anemone in two.

The splitting process could take anywhere from one minute to two hours, but it usually lasted about 20 minutes and went something like this:

It's a slow process, and despite the inherently violent nature of one animal tearing another in half, it looks more like a tickling, teasing interaction than a brutal ripping one.

In fact, as the authors note, "fission" – or, dividing oneself down the middle to create a clone – is "a well-known form of sea anemone asexual reproduction."

They also tested whether crabs would attempt to steal anemones from each other.

In most cases, when a crab with anemones encountered one without, a fight ensued, even when the anemone-endowed crab was hopelessly larger than the naked one. The researchers found that in nearly half of cases, the anemone-less crab stole one anemone. Sometimes, it would manage to steal a piece of one anemone. Rarely, it would manage to steal both.

Schnytzer says the study raises other questions about symbiotic relationships between crabs and sea anemones.

"This is just one of about 10 species of [similar] crabs," he explains. "Some species are picky about what type of anemone they carry. Others are not. There's a species in Japan that hold nudibranchs. There are a lot of things to look at."