Accessibility links
Dutch Far-Right Leader Tweets Fake Image Showing Rival With Islamists : The Two-Way Geert Wilders posted a photo that he said showed a liberal leader "demonstrating with terrorists" — but the image was a phony. After his political rival objected, Wilders called him a "drama queen." 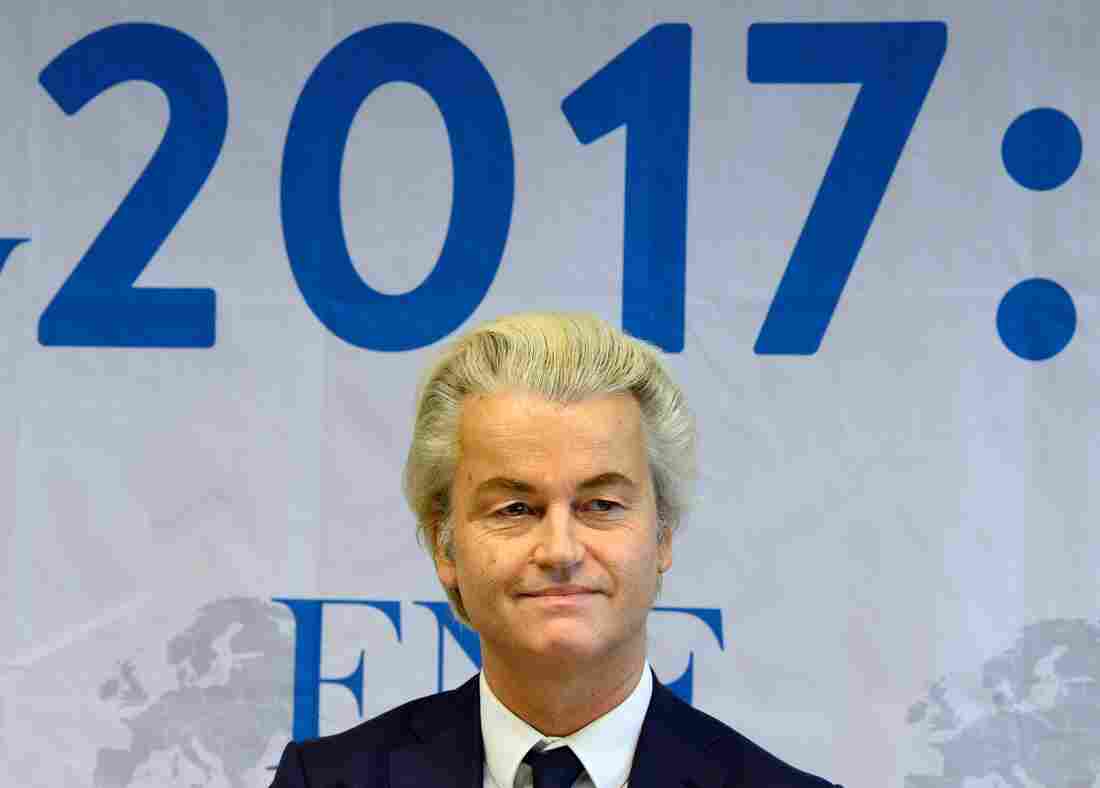 Geert Wilders, chairman of the Freedom Party of the Netherlands is pictured at a press conference last month in Germany. This week, he tweeted a faked photo of a political rival with terrorists. Roberto Pfeil/AFP/Getty Images hide caption 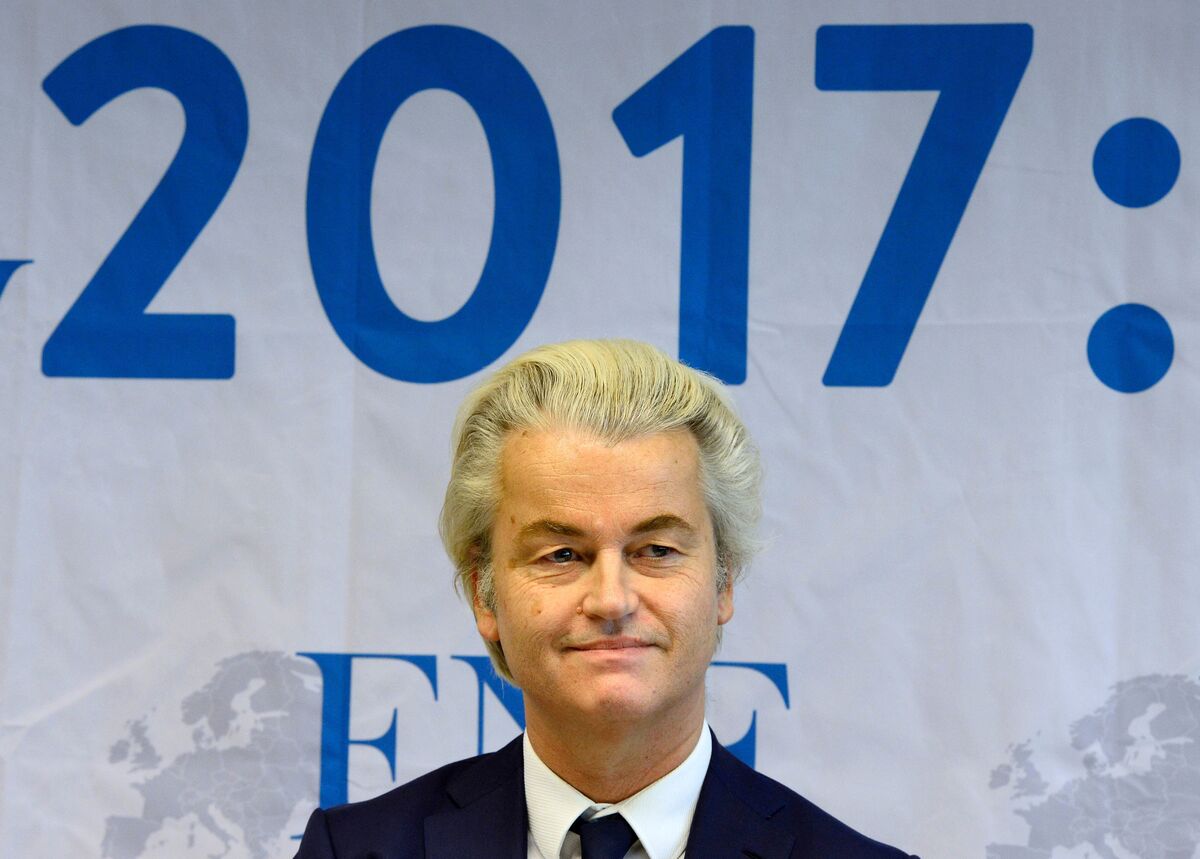 Geert Wilders, chairman of the Freedom Party of the Netherlands is pictured at a press conference last month in Germany. This week, he tweeted a faked photo of a political rival with terrorists.

Wilders' party is surging in the polls ahead of the Netherlands' parliamentary elections, which are being held next month. He did not deny that the image was altered, nor did he apologize: Instead, when the rival objected, Wilders called him a "drama queen."

The altered image, which Wilders tweeted on Monday, depicts Alexander Pechtold, the parliamentary leader of the left-wing D66 party, in a gathering of men. They hold signs that say things like "Islam will conquer Europe" and "Shariah for the Netherlands."

The original photo was distributed by the Getty photo service. As the original makes clear, the signs and the protesters in the background are real — but Pechtold's face was pasted on top of another man's. (The men in the image were, as it happens, protesting at a press conference Wilders held in London in 2009.) 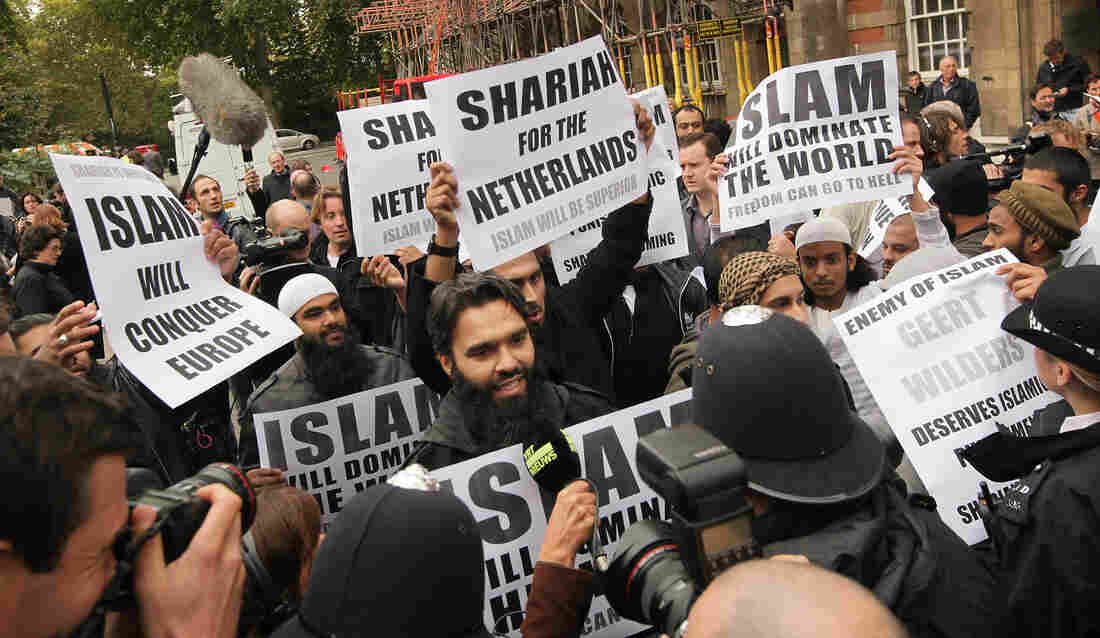 Protestors hold placards outside a press conference being held by right-wing Dutch MP Geert Wilders on Oct. 16, 2009, in London. About 20 protestors gathered outside the building where he held a press conference. Peter Macdiarmid/Getty Images hide caption 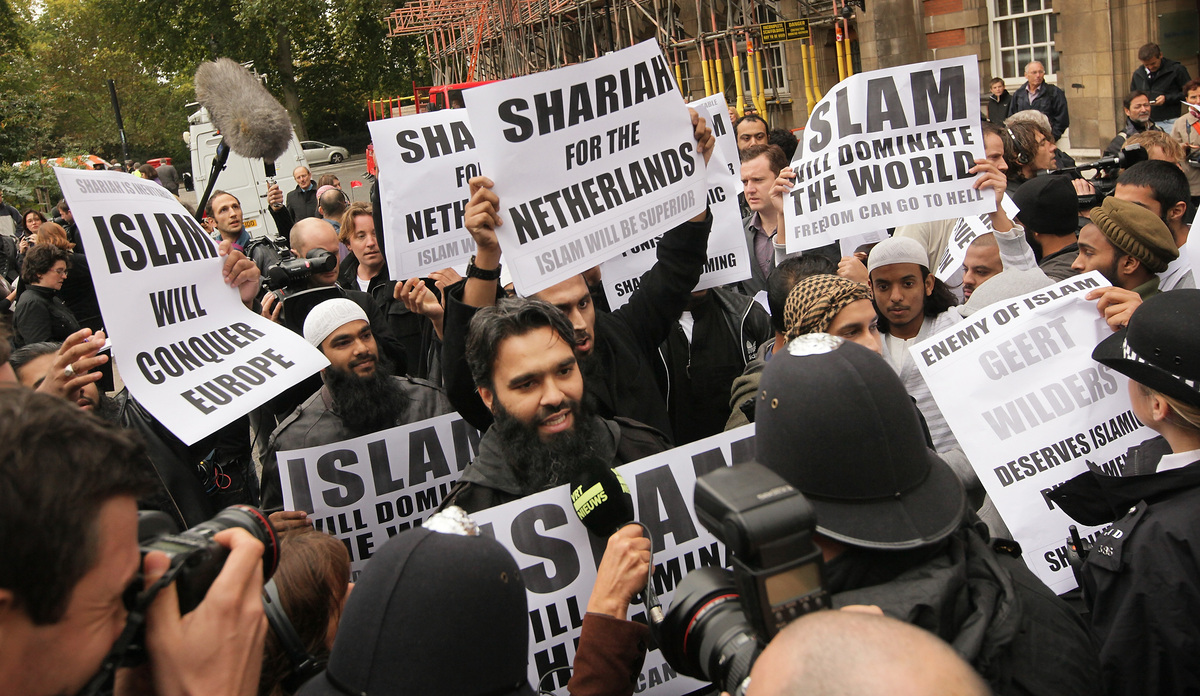 Wilders almost certainly didn't create the altered image himself. It was published on the Dumpert image hosting site, where it was apparently posted one day after the original photo was taken.

Pechtold responded to the tweet on Facebook. According to a translation by the AFP, he said in part, "Usually I laugh at Photoshopped pictures on the internet. But not this time. Not because I can't stand up for myself... but because it gives people false impressions.

"In these times of fake news and alternative facts, we can't just ignore the consequences that such a fake image can have," he said, according to AFP. "I draw the line today."

In response, Wilders tweeted "Hou op met klagen dramaqueen" — that is, "Stop complaining, drama queen." He said Pechtold had demonstrated "standing among Palestinian flags" — possibly a reference to a real photo of Pechtold at a protest against President Trump's travel ban, in which other people holding Palestinian flags can be seen behind him — and with "friends of Hamas."

Lauren Frayer, reporting for NPR last month, wrote that Wilders, famous for his anti-immigrant and anti-EU views, "looks likely to win the most votes in the Dutch election March 15." She continued:

"Wilders promises to ... return the Netherlands to its white, Christian roots. But what makes him different from the far-right in other European countries is that he also favors gay rights, legalized drugs and feminism.

"What appeals to many Dutch voters is that he vows to protect those liberal Dutch values from an enemy that he says is Islam. ...

"He's an isolationist. He wants to ban the Quran, shut down mosques and pull his country out of the European Union. He wants to cut all foreign aid. Much like the Arab Spring a few years ago, Wilders says a wave of populist anger is now sweeping the West — and he's proud to be one of its leaders.

"'I'm a patriot. I believe there's a patriotic spring going on in the world today, in the Western world,' Wilders said."

A previous version of this post incorrectly said Geert Wilders was running for president. He leads one of the main parties running in next month's parliamentary elections in the Netherlands.