Accessibility links
Hundreds Of Pilot Whales Stranded On New Zealand's Farewell Spit, Amid Continuing Rescue Efforts : The Two-Way Volunteers gathered early to send some 100 surviving whales back to sea, after one of the worst mass strandings in New Zealand's history. But just hours later, a new large pod washed ashore nearby. 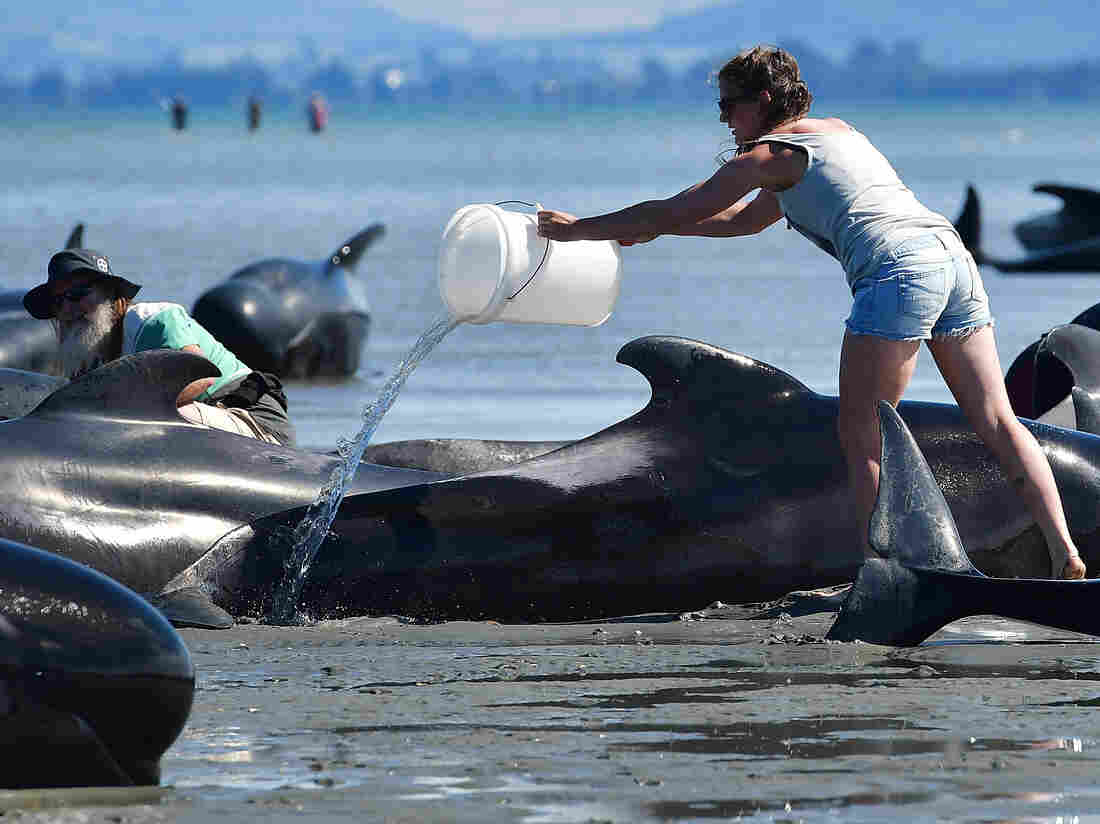 A volunteer pours water on some of the stranded pilot whales at Farewell Spit on Saturday. Marty Melville/AFP/Getty Images hide caption 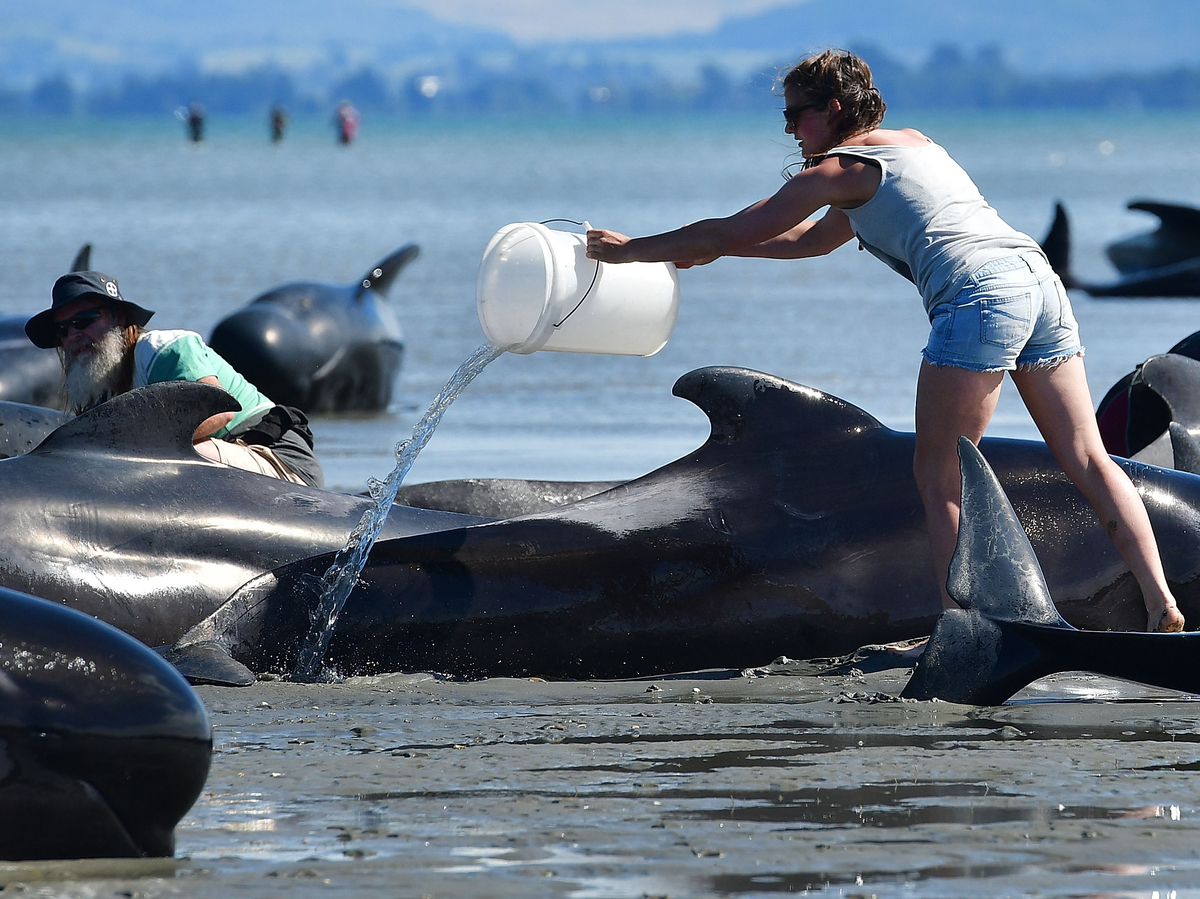 A volunteer pours water on some of the stranded pilot whales at Farewell Spit on Saturday.

The day began with grim resolve, as volunteers descended upon a remote New Zealand beach to try to send some 100 beached pilot whales back to sea. By mid-afternoon local time, most of those whales — the survivors of country's third-largest stranding on record — had successfully swum back into Golden Bay.

It could have been a happy ending to a story that began tragically, with some 300 whales found dead after more than 400 stranded earlier in the week on Farewell Spit, a thin strip of beach that arcs like a bent finger into the waters north of New Zealand's South Island.

The volunteers' celebrations did not last long, though.

Another large pod, composed of approximately 200 whales, stranded just hours later near the original site. The members of that second group appear to be different from the original survivors, which had been tagged before being refloated. None of the new whales bore those tags, NBC News reports.

For the volunteers, it was a heartbreaking close to a Saturday filled with hope and hard effort. In two rescue attempts earlier in the day — both led by New Zealand's Department of Conservation and Project Jonah, a group dedicated to protecting marine mammals — volunteers had managed to send about 80 of the 100 survivors from the original group back to sea.

It was no easy task. It is common for whales, once they have been refloated, to nevertheless strand again shortly afterward on the same shore, according to the DOC's Andrew Lamason. 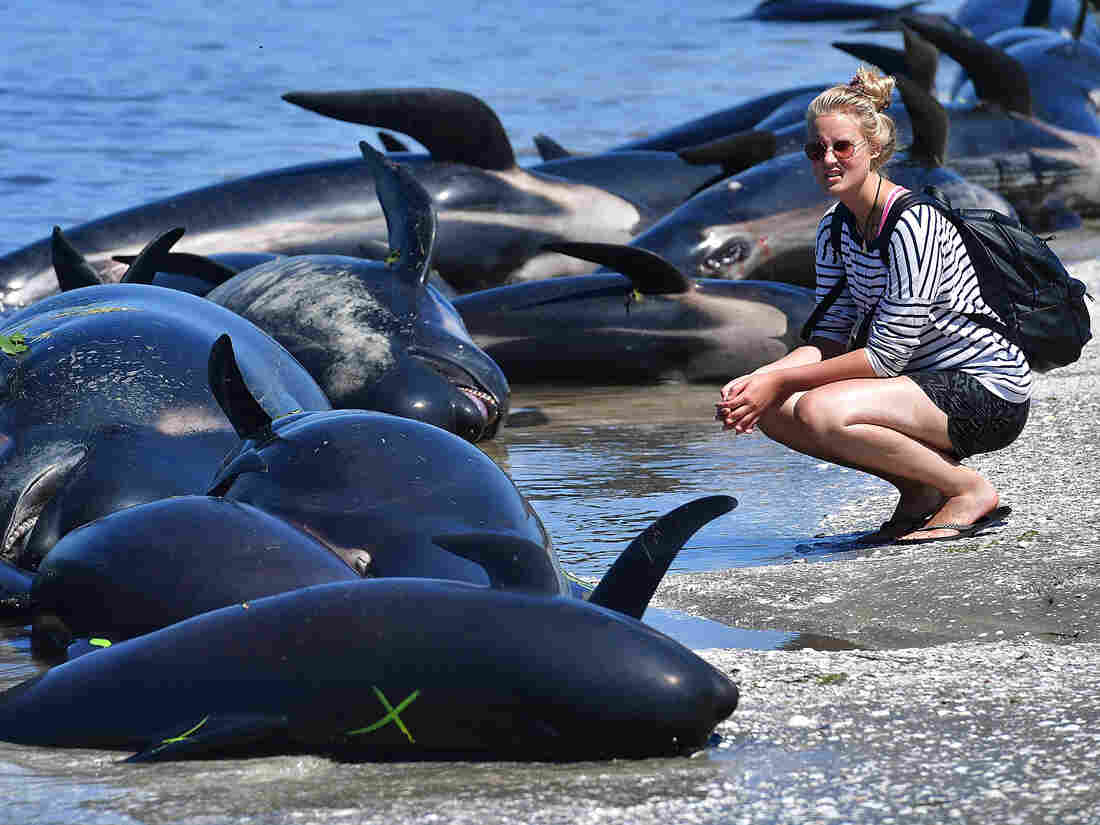 A bystander looks at a row of dead pilot whales after the mass stranding at Farewell Spit, on New Zealand's South Island, on Saturday. Marty Melville/AFP/Getty Images hide caption 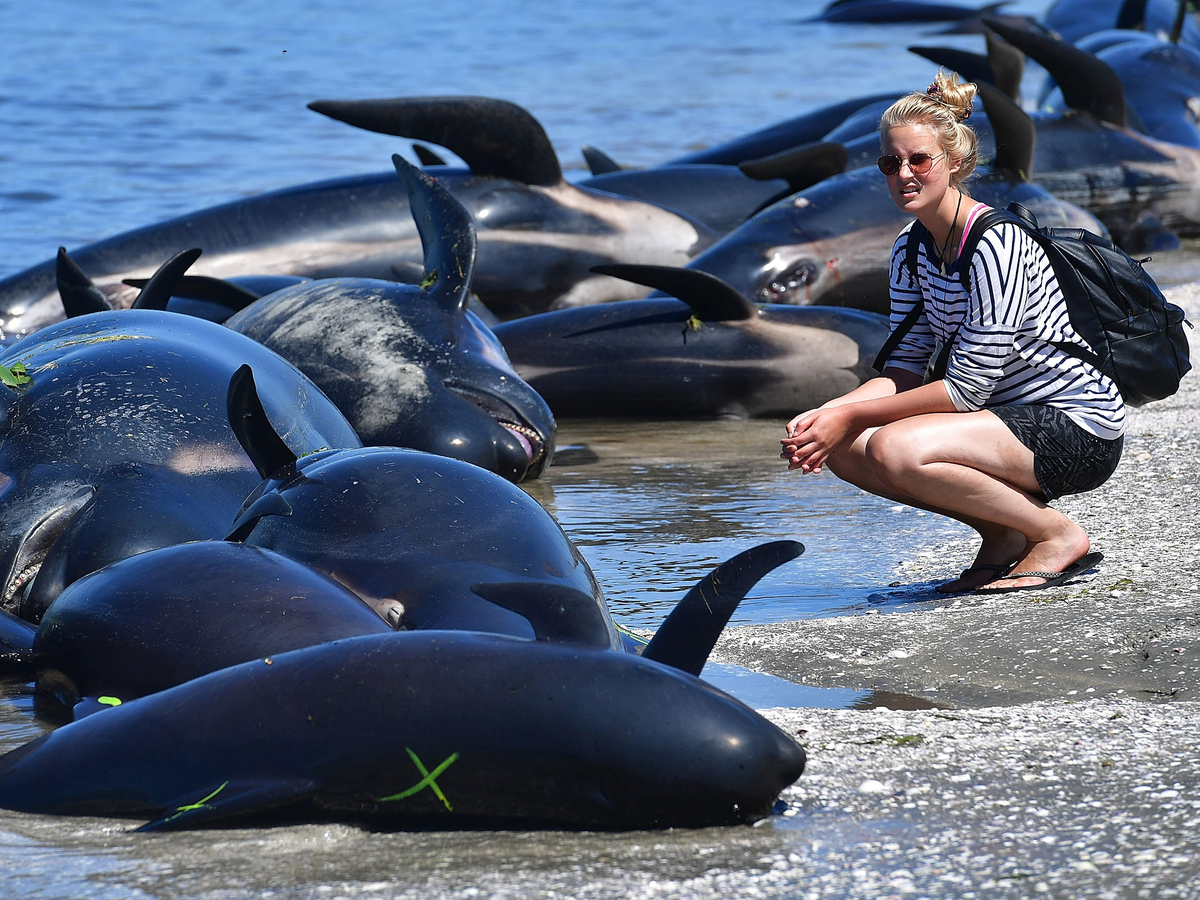 A bystander looks at a row of dead pilot whales after the mass stranding at Farewell Spit, on New Zealand's South Island, on Saturday.

"We are trying to swim the whales out to sea and guide them, but they don't really take directions, they go where they want to go," Lamason told The Guardian. "Unless they get a couple of strong leaders who decide to head out to sea, the remaining whales will try and keep with their pod on the beach."

To combat this tendency, the volunteers formed a human chain in the water to block the whales' return — despite warnings that a shark was possibly in the area. And their early efforts were largely successful: Of the original 100, only 20 returned to shore.

The 20 that restranded would need to be euthanized "to relieve their suffering," the DOC said in a statement, explaining that "unsuccessful attempts at refloating the whales would likely lead to more injury and stress to them and prolong the whales' suffering."

Still, the outcome was largely positive — for a few hours, at least. Then, the new pod came ashore nearby on the same beach.

Experts with the DOC and Project Jonah do not know the precise reason for such mass strandings, one after another. Farewell Spit has been occasionally described as a whale trap, since its unusual shape and shallow waters often impair the echolocation of whales rounding the South Island's northern tip.

"It's a very difficult place if you get lost in there and you are a whale," the DOC's Herb Christophers told the BBC. And once one whale gets lost, the rest of the pod can follow into the same danger, led by that whale's distress calls.

DOC ranger Mike Ogle posited a different theory on a local radio broadcast, reports The Independent, which notes Ogle suggested a shark may have been to blame.

"There's one carcass out there with some shark bites in it — but not a big one, just a small one, but quite fresh bites," Ogle said, according to the British paper. "So yeah, there's something out there."

The DOC put out an urgent call for more volunteers to renew the efforts on Sunday. The agency also reminded prospective volunteers: Don't forget to bring your wetsuit, bucket and sheets.