Accessibility links
Planned Parenthood Protests Rouse Dueling Rallies Nationwide : The Two-Way Across the U.S., anti-abortion protesters flocked to clinics to demand the defunding of Planned Parenthood. In many cities, supporters showed up to counterprotest — sometimes right across the street. 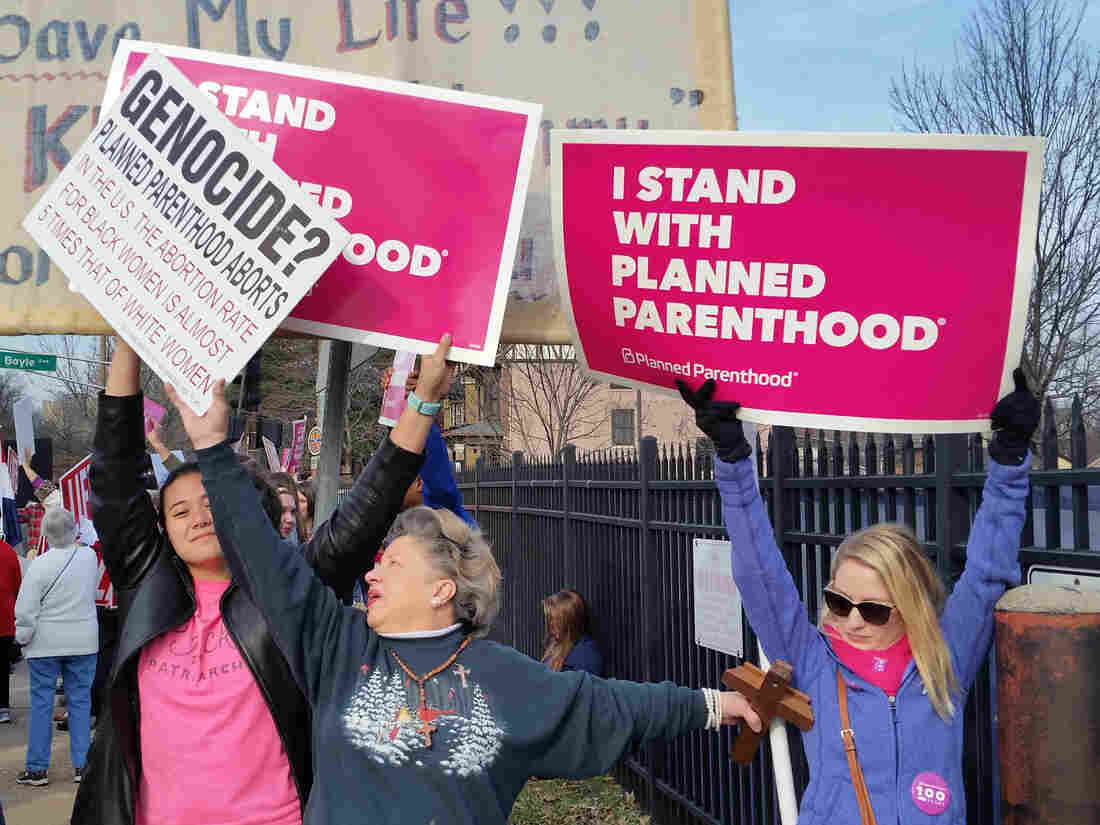 Planned Parenthood supporters and an opponent of the organization try to block each other's signs during a protest and counterprotest Saturday in St. Louis. Jim Salter/AP hide caption 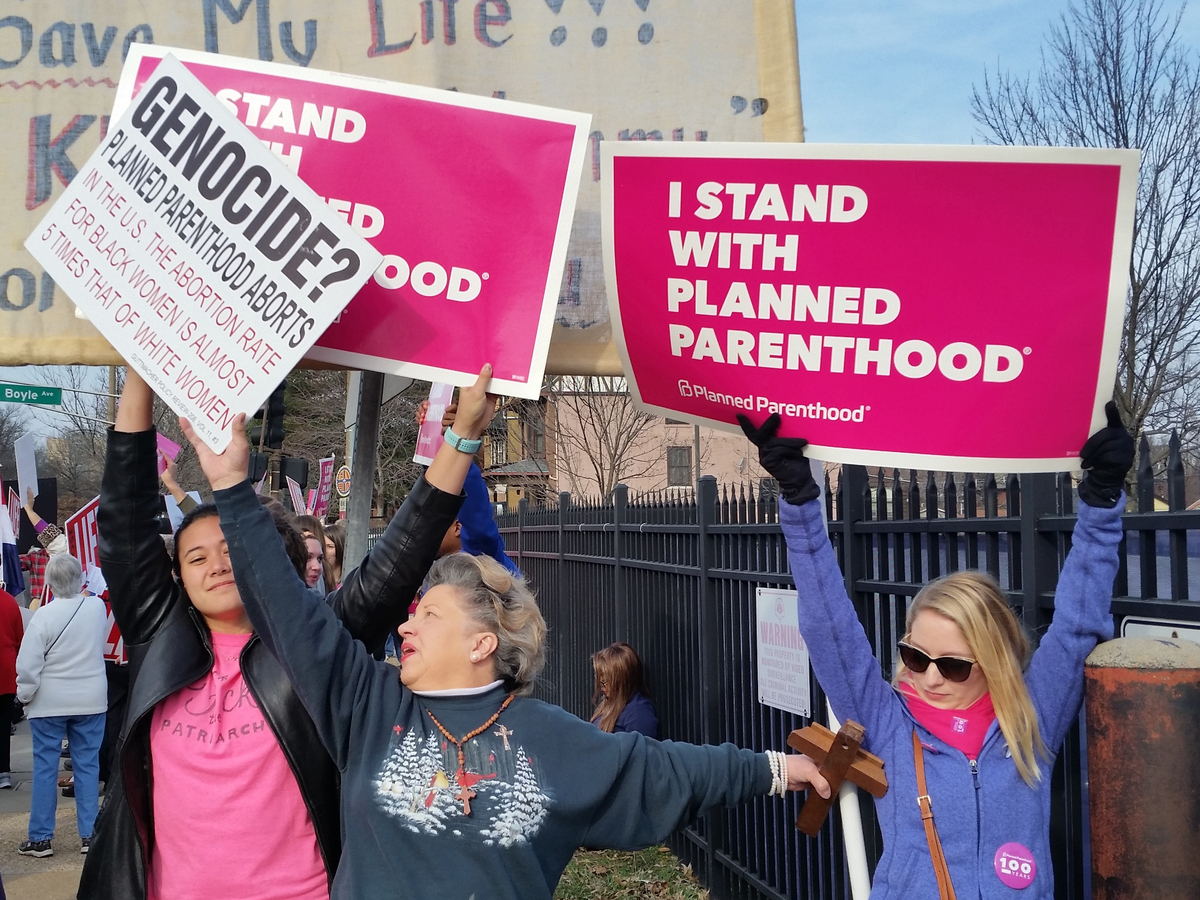 Planned Parenthood supporters and an opponent of the organization try to block each other's signs during a protest and counterprotest Saturday in St. Louis.

The group #ProtestPP, which organized the rallies, says demonstrations have been planned in at least 45 states, according to ABC News. From Detroit to Los Angeles, from St. Louis to St. Paul, The Associated Press reports that protesters have gathered with signs reading "Pray to End Abortion" and "Defend Life."

"Why should tax dollars be given to somewhere where they're doing killings of babies," anti-abortion demonstrator Marisol Pfaff asked St. Louis Public Radio's Camille Philips. Pfaff and scores of other protesters gathered Saturday outside the only clinic in Missouri that provides abortions.

Planned Parenthood — which provides a wide range of health care services for women, including abortion — receives more than $500 million a year from the federal government, about 75 percent of which comes from Medicaid.

According to Planned Parenthood, about 3 percent of the services it provided in 2014 were abortion-related. The group says the vast bulk of its services instead go toward contraception and the prevention and treatment of sexually transmitted diseases. It also provides cancer screenings and other women's services.

That's why Sharon Caldwell and a large group of other counterprotesters came out to the St. Louis clinic to rebut the claims of the anti-abortion rally Saturday. Caldwell tells Phillips the organization provided invaluable help for her after she was raped.

"They were the only people who cared," Caldwell says. "They were just like, 'A terrible thing happened. Here's how we support you.' " 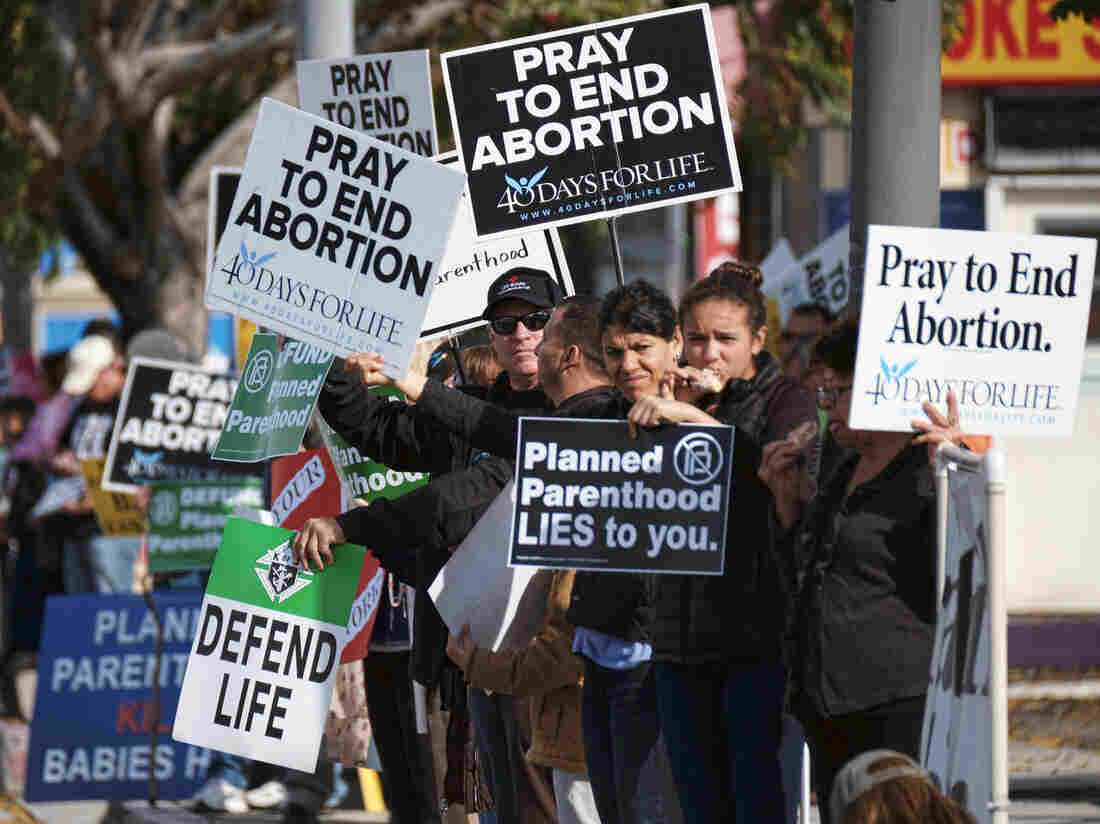 Protesters display their signs outside a Planned Parenthood health center in Los Angeles on Saturday. Together with protesters in other cities across the U.S., they gathered to demand the organization be stripped of its federal funding. Richard Vogel/AP hide caption 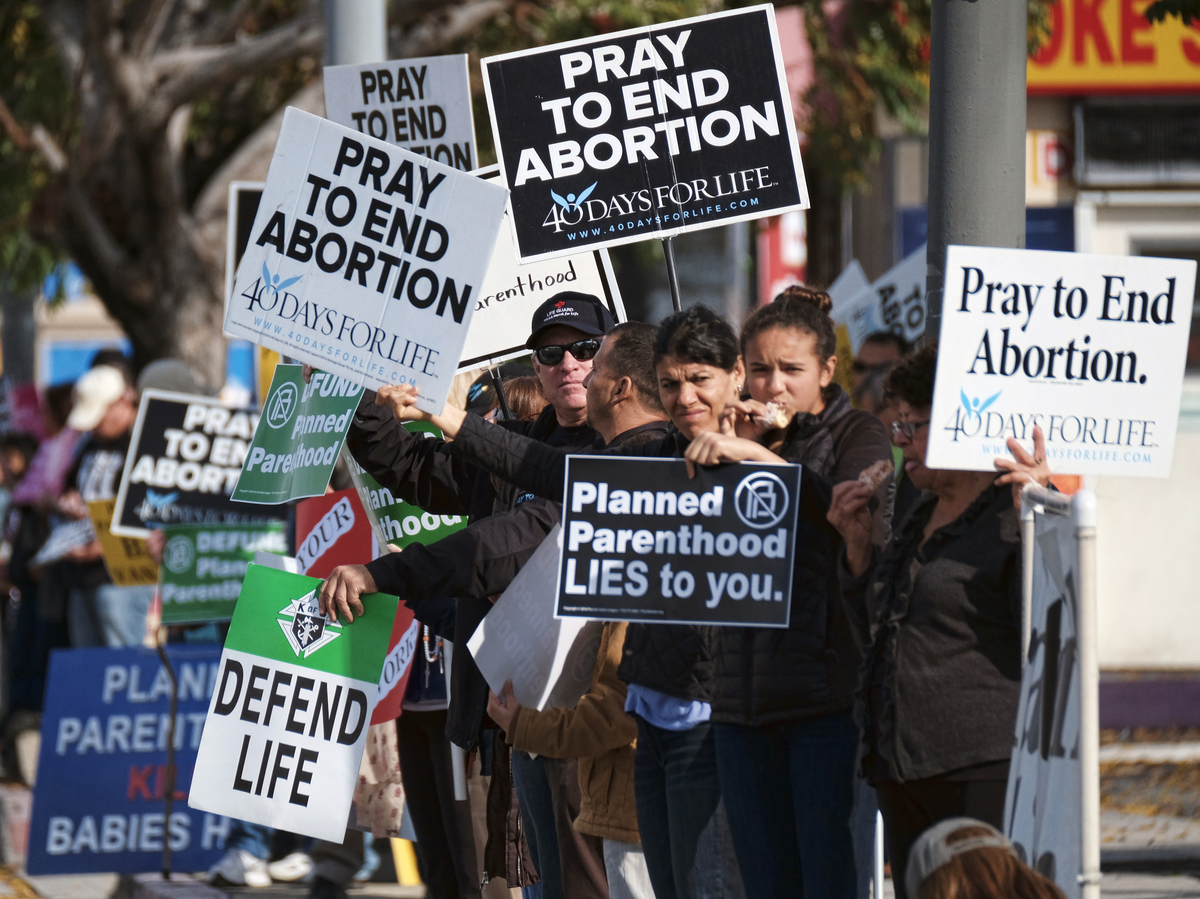 Protesters display their signs outside a Planned Parenthood health center in Los Angeles on Saturday. Together with protesters in other cities across the U.S., they gathered to demand the organization be stripped of its federal funding.

The dueling rallies in St. Louis offer just a microcosm of the flurry of protests and counterprotests in cities across the U.S.

In St. Paul, Minn., The Minneapolis Star-Tribune describes a scene in which thousands of protesters and counterprotesters faced each other on the same pavement just a dozen feet apart, held back by parallel crowd barriers. The Planned Parenthood supporters — who far outnumbered their anti-abortion counterparts, according to the paper — shouted chants of "Defund Pence" and "Tax the church!"

Meanwhile, the balance was reversed outside a Denver clinic, where abortion rights opponents outnumbered the counterdemonstrators. Colorado Public Radio's Sam Brasch reports that Planned Parenthood officials actually asked supporters to stay away, fearing conflict would only make patients even feel more unwelcome. So instead, those supporters took their demonstrations downtown, where they had a large rally outside Colorado Sen. Cory Gardner's office.

Leslie Hanks, an anti-abortion demonstrator in Denver, told Brasch he hopes President Trump "does the right thing and I hope that Planned Parenthood is defunded, but that's the very least that should happen."

Anti-abortion activists have been re-energized with a new, much more sympathetic administration having moved into the White House. Vice President Mike Pence addressed the annual March for Life last month — a historic first in the major anti-abortion rally's decades-long history — and President Trump has blocked U.S. aid money from supporting groups that provide or "promote" abortion in other countries.

"Saturday, and every day, Planned Parenthood advocates and activists show that they refuse to be intimidated and they won't back down."

Clarification: This post has been updated to reflect a rally by Planned Parenthood supporters in downtown Denver.