Accessibility links
Author Philip Pullman Announces A Follow-Up Trilogy To 'His Dark Materials' : The Two-Way The British author talked to NPR about The Book of Dust, his return to the world of Lyra Belacqua and armored bears, the first volume of which will be published in October. 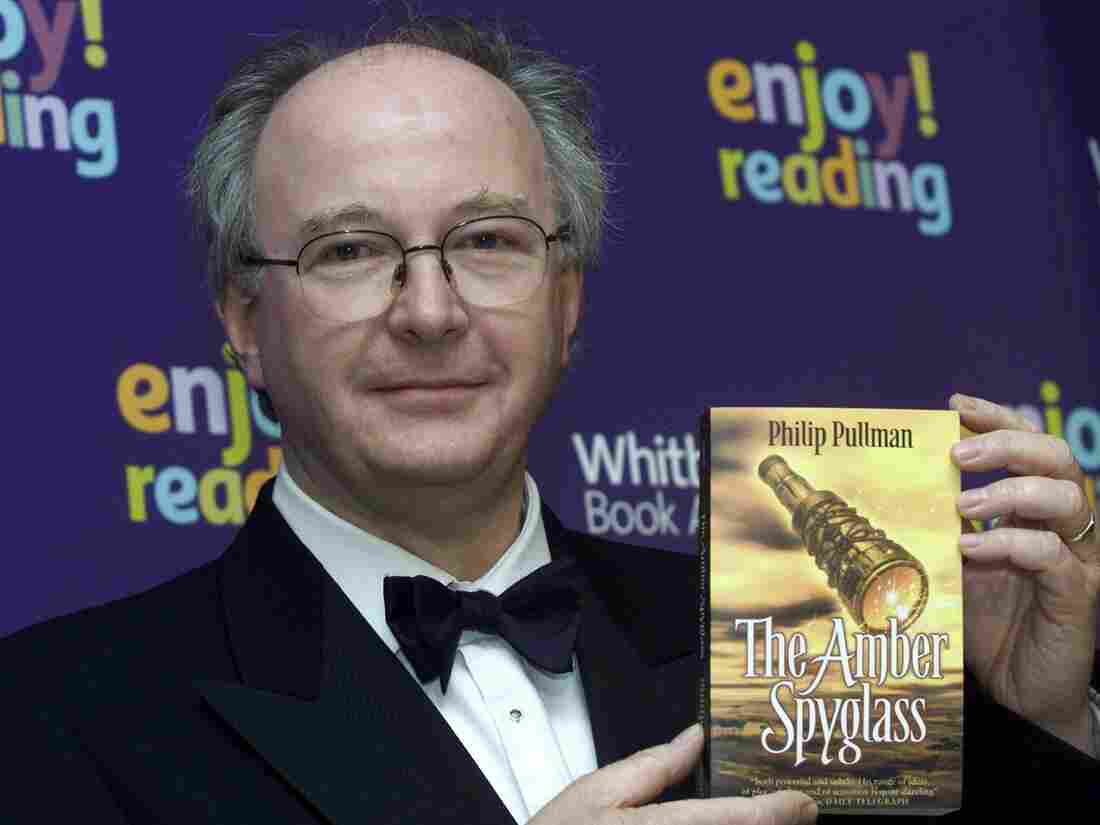 Pullman, author of the His Dark Materials trilogy, holds a copy of its concluding volume, The Amber Spyglass. The first book of a new series will be published in Fall 2017. Max Nash/Associated Press hide caption 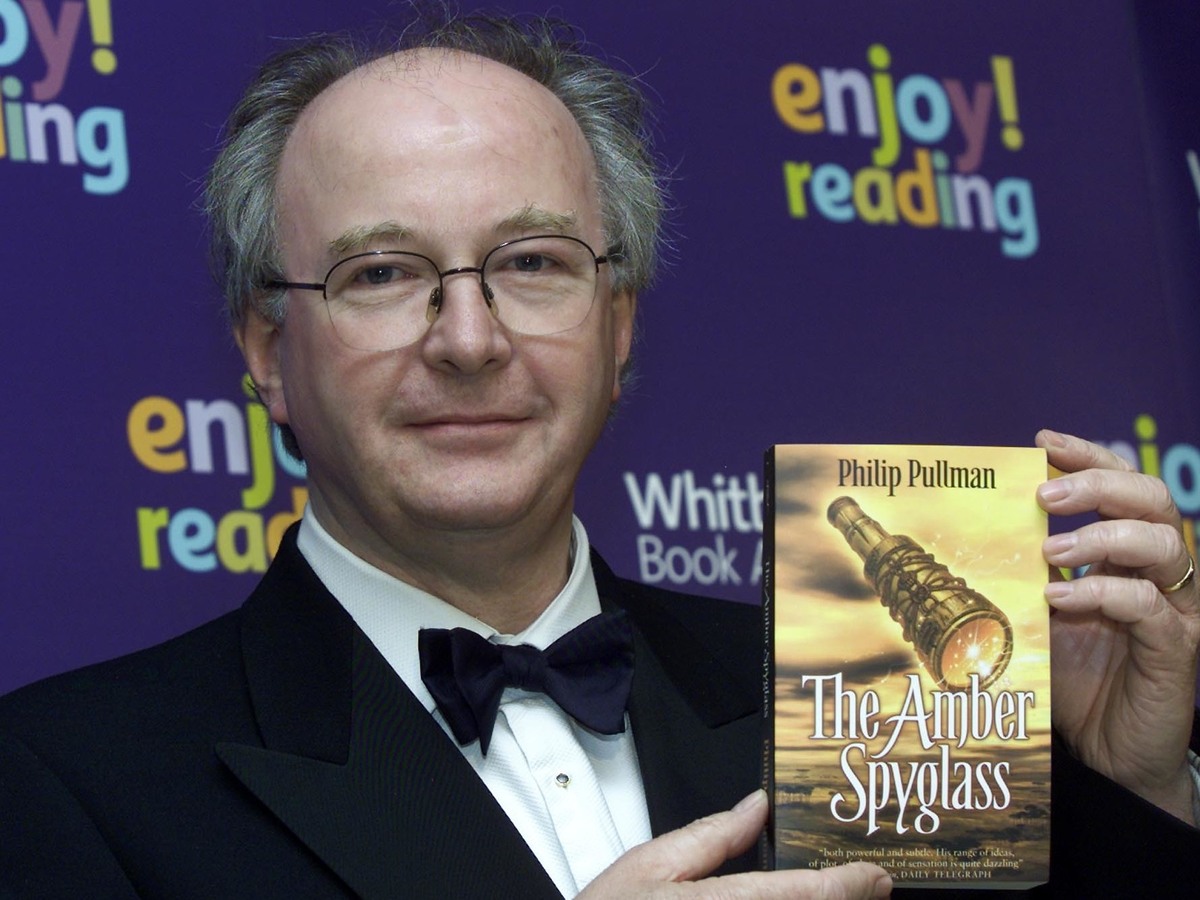 Pullman, author of the His Dark Materials trilogy, holds a copy of its concluding volume, The Amber Spyglass. The first book of a new series will be published in Fall 2017.

The hugely successful fantasy trilogy His Dark Materials will be getting a "companion" trilogy, author Philip Pullman announced this evening.

The first book of the new series, which will collectively be called The Book of Dust, is set for publication on October 19.

The original His Dark Materials trilogy consists of three volumes (The Golden Compass, The Subtle Knife, and The Amber Spyglass) published between 1995 and 2000. The series has sold over 17.5 million copies and been translated into 40 languages.

The events of the first trilogy took place across several parallel worlds — including our own — and touched on disparate ideas related to theology, particle physics, and the loss of childhood innocence. Characters included a headstrong and fiercely intelligent young girl named Lyra Belacqua, and an armored, talking polar bear.

The Book of Dust will return to the world(s) and characters of His Dark Materials, Pullman said, and Lyra will be integral to the new story — but not in the way she was before. The first volume will take place a decade before the events of His Dark Materials, when Lyra is an infant. The second and third volumes will be set ten years after the original trilogy's conclusion, and will follow Lyra as a young woman.

But that doesn't mean what you might expect, Pullman told NPR editor Glen Weldon. He wants readers to consider the new work not as a simple extension of the original trilogy, but as a "companion" to it.

"The [new] story begins before His Dark Materials and continues after it," he said, "... you don't have to read it before you read [the original trilogy] ... this is another story that comes after it, so it's not a sequel, and it's not a prequel, it's an equal."

The title, The Book of Dust, refers to an invisible substance that figures largely in the earlier books — a fictional elementary particle that harbors a mysterious affinity with human consciousness.

"That's what I really wanted to explore in this new work," he said. "More about the nature of Dust, and consciousness, and what it means to be a human being."

Pullman has already followed up the original trilogy with two novellas and an audiobook. He said he was motivated to revisit the world of Lyra and her companions with a full trilogy because "I sensed a big story. I sensed the presence, in the way that you do, of another story that hadn't been told, and I went closer and ... thought about it and lived with it for a while and discovered that yes, it was a big story, and it did deserve to be told, it deserves its own books."

On where The Book of Dust will fall in the saga

Well, the first book is set roughly ten years before the action of His Dark Materials. And the second book and subsequent books ... are set ten years after it. So in the first one, Lyra is only a baby of about six months. So she's not able to do very much, but she's certainly the focus of intense activity on the part of the main protagonists. In the second book she will be twenty years old, she'll be an adult....

On why he's calling it The Book of Dust

When I wrote the first series, starting in 1993, I didn't expect more than a readership of about two or three thousand. That's sort of based on previous experience and thinking what sort of book it was, I didn't think it would have very wide audience but maybe a few people would enjoy it. The fact that it was received with such interest all over the world in 40 different languages really did amaze me.

It didn't change what I was doing, though, because I was already in my late 40s when I was starting that, I wasn't a very young writer bowled over by all the response and attention and so on. I was pretty clear and determined about what I was doing and how I was doing it. The only difference it made was that I had a lot more letters to write back. To answer. Nowadays I communicate by Twitter, but back in those days there were a lot of letters to write back, which I duly did.

On his impatient readership

Well, I have a standard answer. When people say "How's The Book of Dust getting along? When's it going to be finished?" I say, with perfect truth, "It is three pages longer today than it was yesterday."

On the criticism his books have received

I've been greatly criticized for the attention to religion that I give in the books, but I've been criticized, on the whole, by people who haven't read the books. My attitude to religion is that religion is a most interesting and extraordinary human phenomenon. I'm fascinated by it, interested in it, and at some points critical of it. And the points when I become critical are the points when politics come into it, and religion acquires political power — political with a small "p," for example, within the confines of a single family, or Political with a large "P," on a national or international scale.

When religion gets the power to tell people how to dress, who to fall in love with, how to behave, what they must not read, what they must not wear, all those things, then religion goes bad. ... Religion is private thing, and a fine thing and a good thing, as long as it remains private. As soon as it becomes public and political, it's dangerous. That's the position I've taken up in the first series and the position this current one takes up as well.