Accessibility links
Suicide Bomber Kills At Least 70 People At Sufi Shrine In Pakistan : The Two-Way The blast tore through the historic Lal Shahbaz Qalandar shrine in southern Pakistan, which had been packed with worshippers after evening prayers. The Islamic State has claimed responsibility. 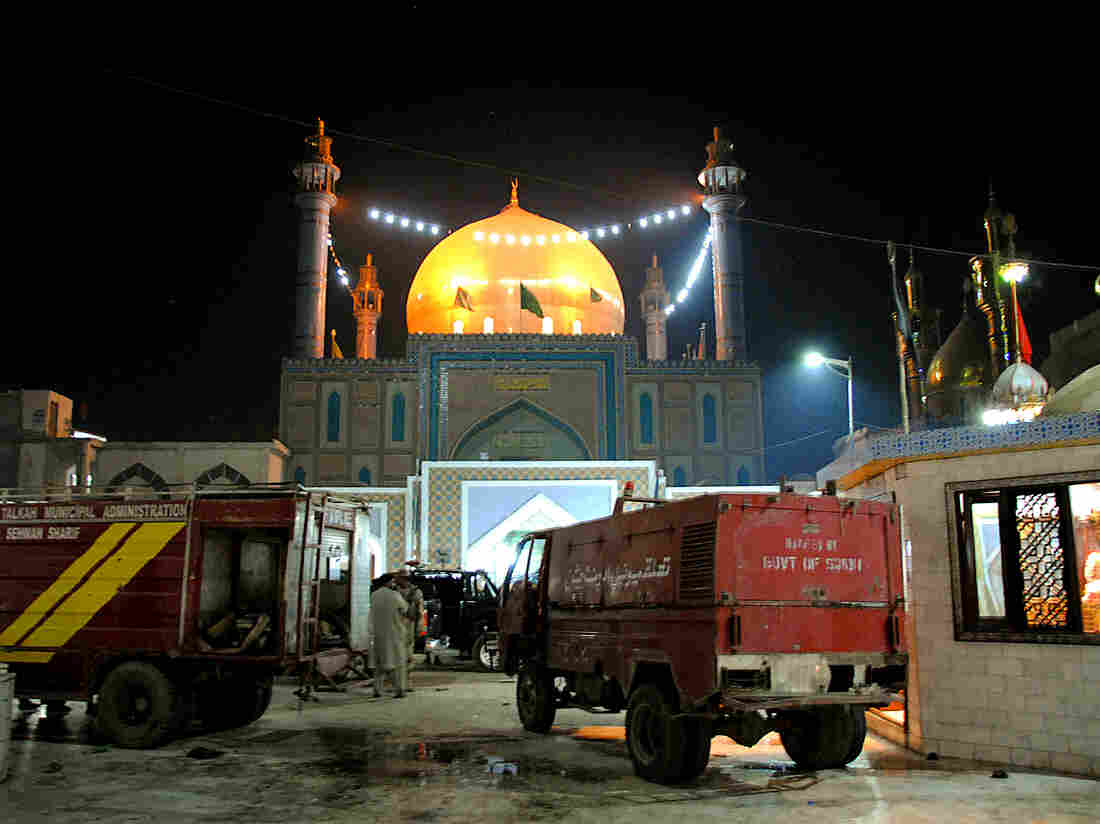 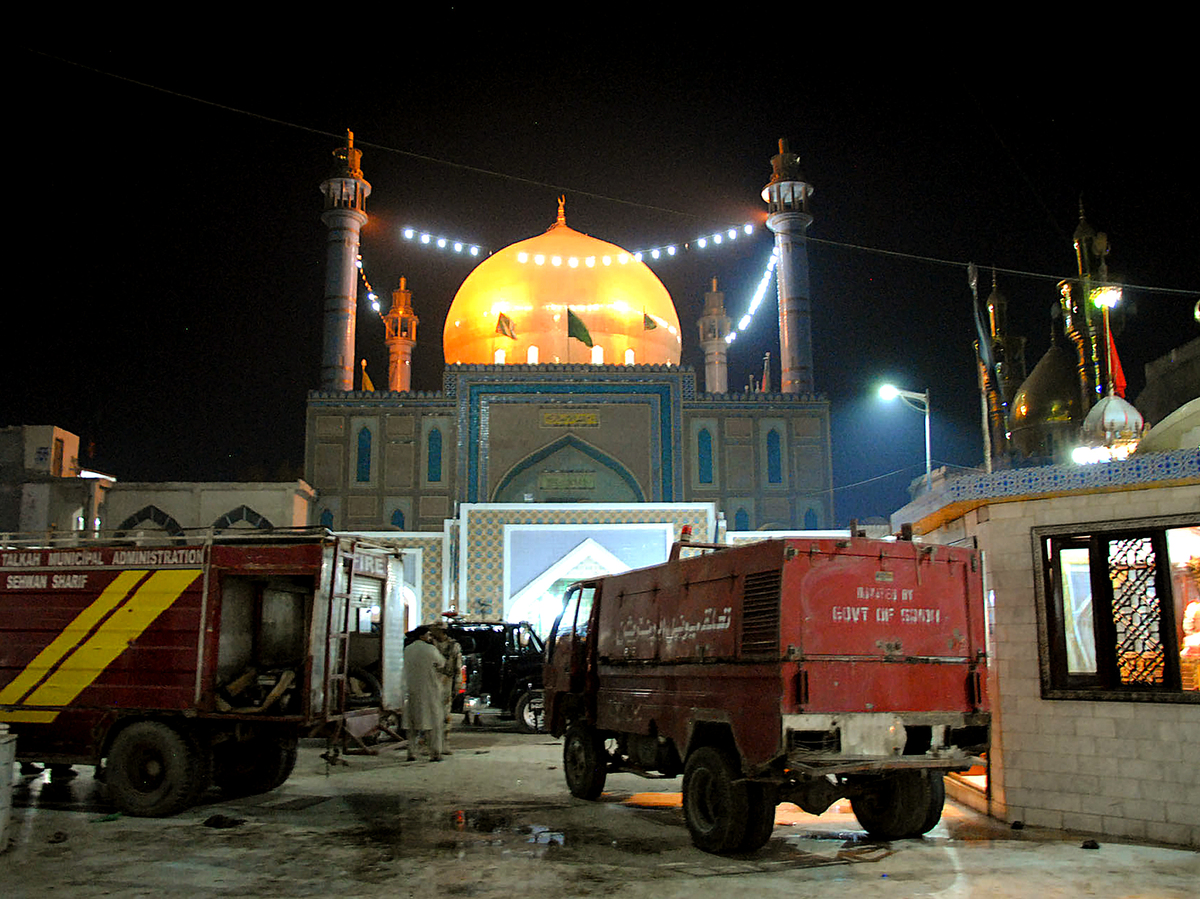 Pakistani soldiers cordon off the shrine of 13th-century Sufi saint Lal Shahbaz Qalandar, in the town of Sehwan, after a bomb killed dozens of worshippers Thursday.

Dozens of people were killed and more than 100 others wounded after a bomb tore through a crowded Sufi shrine in southwestern Pakistan on Thursday. The blast was triggered by an Islamic State suicide bomber, according to a claim by the Sunni militant group's semi-official Amaq news agency.

Reports on the exact death toll have varied — with The Associated Press reporting that at least 75 people died, while the Pakistani newspaper Dawn put the number at 70.

A number of women and children reportedly were among the dead.

The Lal Shahbaz Qalandar shrine, which has stood in the town of Sehwan for some 800 years, is a center of Sufi life and worship in the region. Worshippers had converged on the shrine for dhamaal, a ritual that packed the area with people — thousands of people, by CNN's account.

"Each drop of nation's blood shall be revenged, and revenged immediately," Bajwa said. "No more restraint for anyone."

#COAS, "Each drop of nation's blood shall be revenged, and revenged immediately. No more restraint for anyone."

In a statement, Prime Minister Nawaz Sharif also struck a defiant tone: "Such cowardly acts cannot deter the resolve of the nation to stand against terrorism and our government is committed to root out this menace."

As The Washington Post notes, the shrine blast is the latest incident in what has been a particularly deadly week for Pakistan, which has been buffeted by attacks not only from ISIS, but also Jamaat-ul-Ahrar, a Taliban splinter group which has promised a campaign of violence against government buildings. 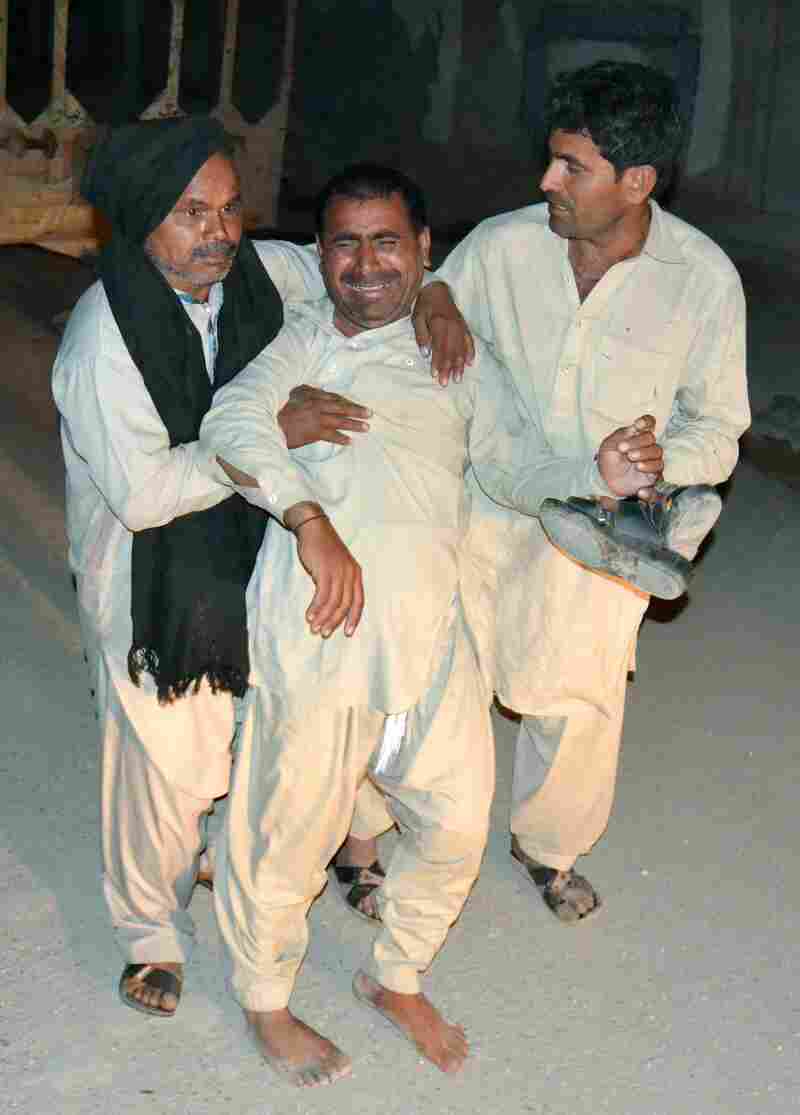 Two men comfort a mourner after the killing of his relative at the shrine Thursday. Yousuf Nagori/AFP/Getty Images hide caption

Jamaat-ul-Ahrar claimed responsibility for a bombing that tore through a rally in the city of Lahore on Monday, killing at least 13 people and injuring dozens more. In the wake of that attack, Bajwa pledged that "terrorists of all hue and colour, their masters, financiers, planners and abettors including from outside will be hunted across the country."

The Post reports that Pakistan "formally complained" to its neighbor Afghanistan on Wednesday, "charging that the militants were operating from sanctuaries across the border."

In response to Thursday's attack, the military spokesman, Maj. Gen. Asif Ghafoor, blamed "hostile powers" and "sanctuaries in Afghanistan." He tweeted that Pakistan would be immediately closing its border with Afghanistan "till further orders due to security reasons."

Pakistan-Afghanistan Border closed with immediate effects till further orders due to security reasons.

The Islamic State has waged a campaign of violence against Shiite Muslims as well as Sufis, who take a mystical approach to Islam and prize a direct relationship with the divine.

The AP reports that Thursday's shrine attack was the deadliest in Pakistan since 2014, when an assault on a school killed 154 people.