Accessibility links
Key Moments In The Dakota Access Pipeline Fight : The Two-Way An overview of multiple legal challenges and protests since the U.S. Army Corps of Engineers considered approving a section of the pipeline near the Standing Rock Sioux Reservation in North Dakota. 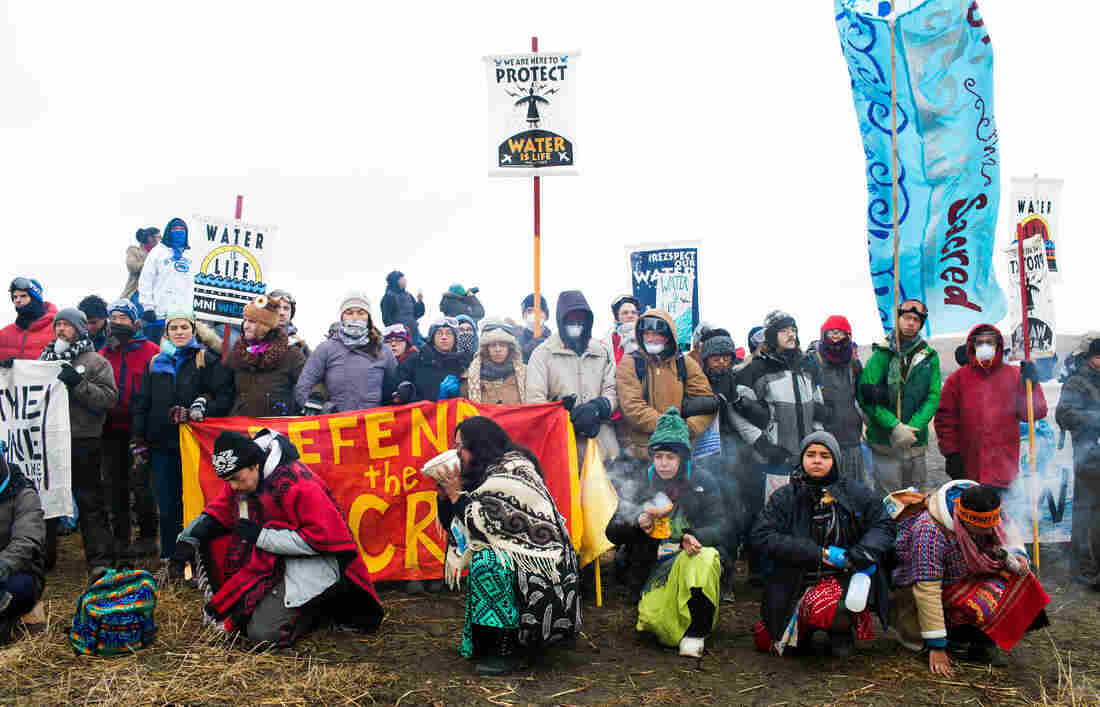 The Dakota Access Pipeline's route takes it over four states and nearly 1,200 miles, from the Bakken oil fields in northwestern North Dakota through South Dakota, Iowa and down to a terminal in Illinois.

But one Missouri River crossing just north of the Standing Rock Sioux Reservation in North Dakota has become the focal point of a fight over how the pipeline's route was analyzed and approved by the federal government.

In legal challenges and public demonstrations, members of the tribe and their supporters have argued that they were not adequately consulted about the route. Running the pipeline under a Missouri River reservoir called Lake Oahe, member say, would jeopardize the primary water source for the reservation, and construction would further damage sacred sites near the lake, violating tribal treaty rights.

After more than six months of legal wrangling, the Trump administration reversed a decision by the Obama administration and announced it is allowing the pipeline company, Energy Transfer Partners, to drill under Lake Oahe and finish building the last section of the pipeline.

Here are some key moments in the fight over the Dakota Access Pipeline.

This story has developed over many months, and this timeline captures only a portion of the newsworthy developments that have occurred, focusing largely on legal and policy decisions.

The U.S. Army Corps of Engineers for the Omaha District publishes a draft of its plan to approve the Dakota Access Pipeline route under the Missouri River.

The Corps opened the plan up to public comments, including comments on environmental and cultural impacts.

The U.S. Army Corps of Engineers office determines that no historic properties will be affected by the pipeline crossing.

A letter from the Corps' senior field archaeologist for the project lists five "recorded cultural sites" within the area that could be affected by construction of the pipeline, and more than 30 others that are thought to be within a 1-mile radius.

The letter supports the determination that "no historic properties will be subject to effect," by the crossing under Lake Oahe, and notes that the Standing Rock Sioux has requested further archaeological survey of the area.

The U.S. government's Advisory Council on Historic Preservation disputes the Corps determination in a letter to the assistant secretary of the Army, citing the need for cooperation with tribal leaders to identify areas of concern to them.

In the letter, the advisory council director asks the Corps to justify its decision.

The U.S. Army Corps of Engineers approves the portion of the Dakota Access Pipeline route that crosses the Missouri River at the Lake Oahe reservoir. The crossing is on Army Corps-controlled land.

The Omaha district commander, Col. John Henderson, wrote, "I have evaluated the anticipated environmental, economic, cultural, and social effects, and any cumulative effects" of the river crossing and found it is "not injurious to the public interest."

The Standing Rock Sioux Tribe sues the U.S. Army Corps of Engineers. The tribe alleged that the Corps had failed to adequately consult tribe members before approving the pipeline, and had violated the National Historic Preservation Act when it "effectively authorized construction of the vast majority of the pipeline in and around federally regulated waters without any provision to ensure against destruction to culturally important sites."

"There is a high risk that culturally and historically significant sites will be damaged or destroyed in the absence of an injunction," the tribe wrote in its court filing. 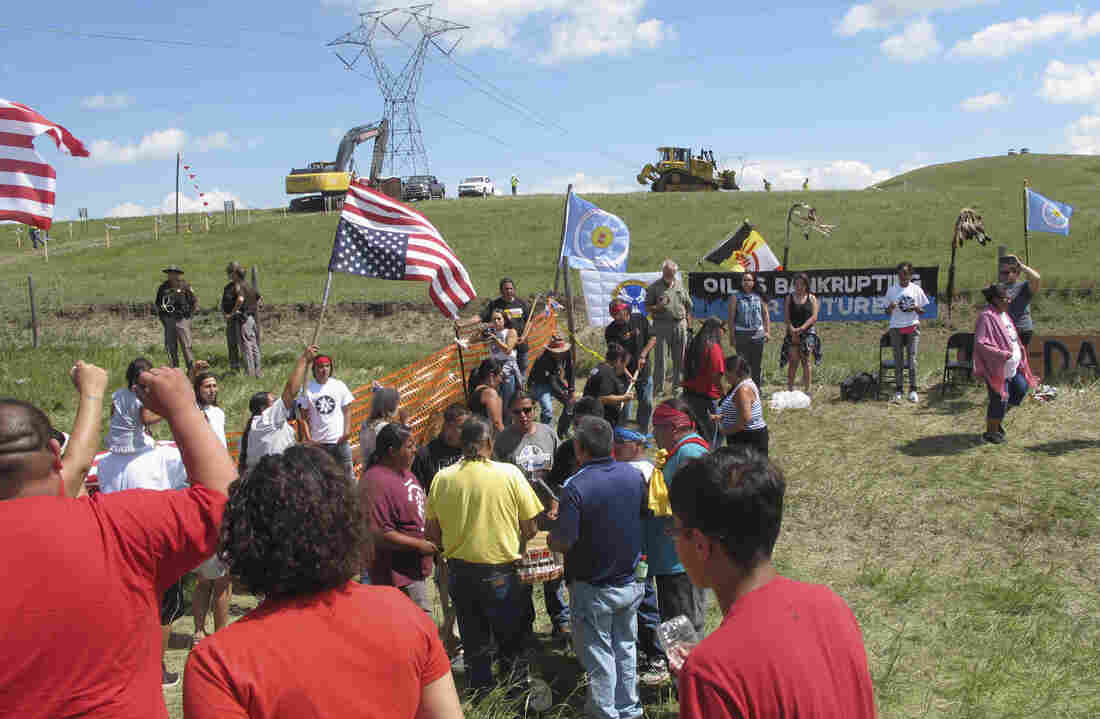 Dakota Access LLC, a subsidiary of the pipeline company Energy Transfer Partners, countersues leaders of the Standing Rock Sioux, alleging that protesters near the Lake Oahe river crossing have "halted construction activities" that had been scheduled to begin five days earlier. 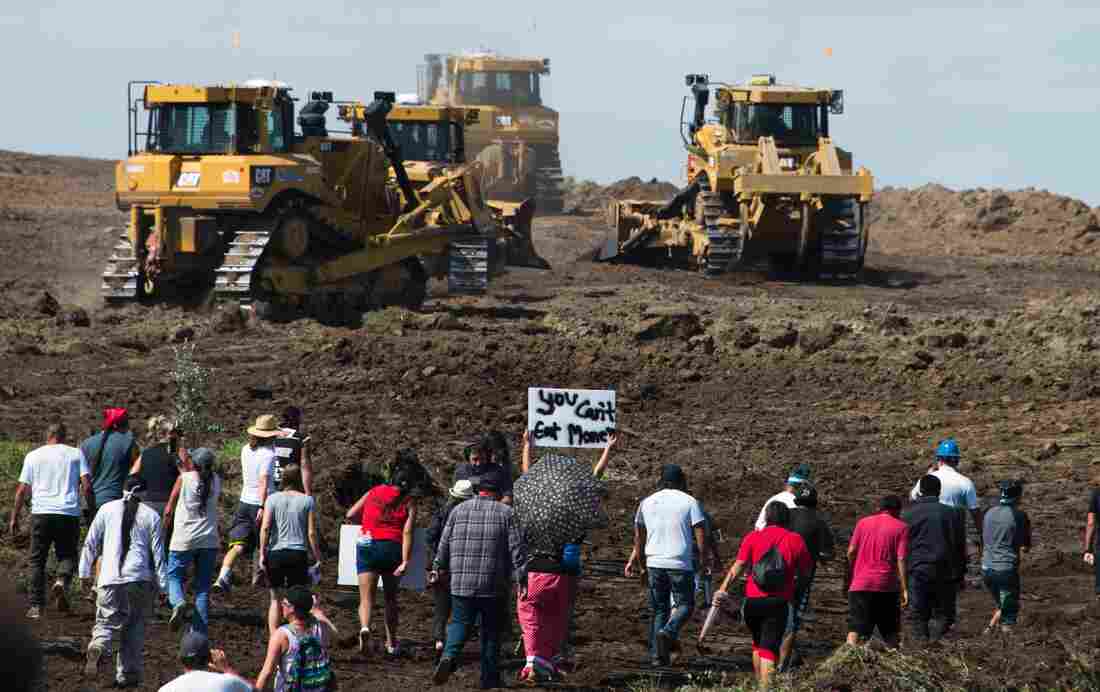 Native American protesters and their supporters approach construction crews during a demonstration against work being done for the Dakota Access Pipeline near Cannon Ball, N.D., on Sept. 3, 2016. Robyn Beck/AFP/Getty Images hide caption

"I surveyed this land and we confirmed multiple graves and specific prayer sites," the tribe's historic preservation officer, Tim Mentz, said in the statement. "Portions, and possibly complete sites, have been taken out entirely."

N.D. Pipeline Protester: 'It's About Our Rights As Native People'

And protests in North Dakota turned violent when private security guards clashed with some protesters.

As reporter Amy Sisk of the public radio collaboration Inside Energy said in an NPR Live discussion on Facebook, "What happened is some protesters who've been camped out near this construction area broke through a fence to access this construction site and were met with some private security guards and guard dogs hired by the pipeline company. ... Law enforcement says the protesters attacked the security guards and the dogs." She added that demonstrators said the dogs "actually bit some of the protesters." 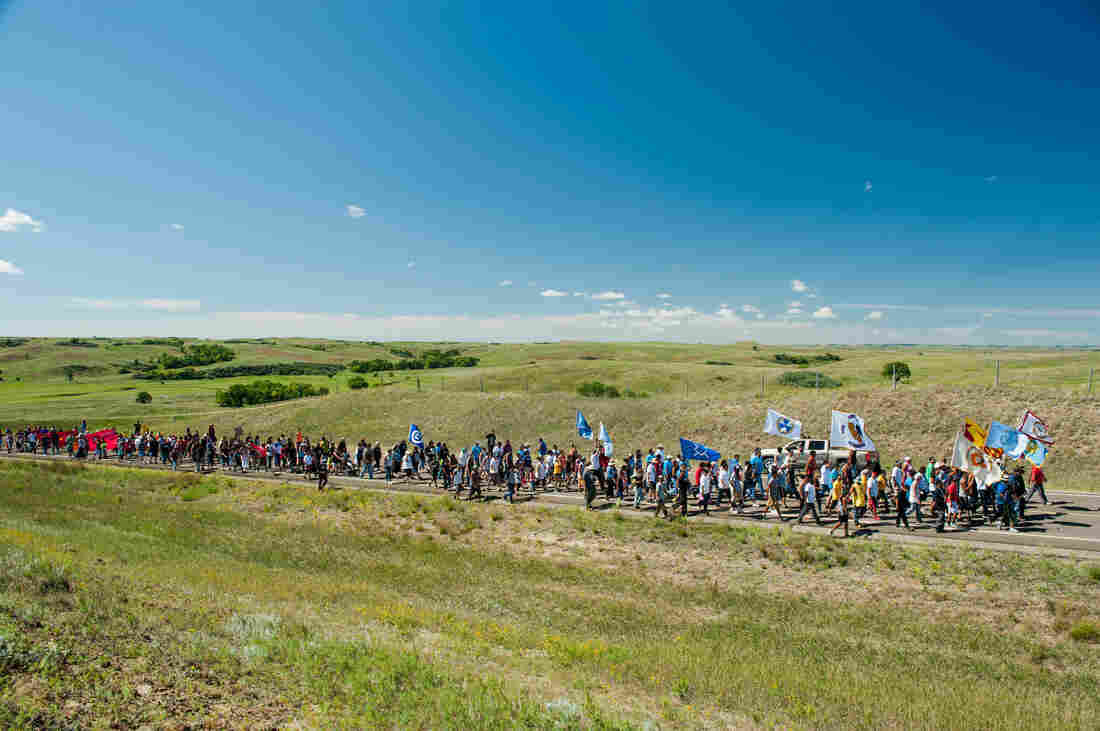 Demonstrators march from an encampment on the banks of the Cannonball River to a nearby construction site for the Dakota Access Pipeline to perform a daily prayer ceremony in September 2016. Andrew Cullen hide caption 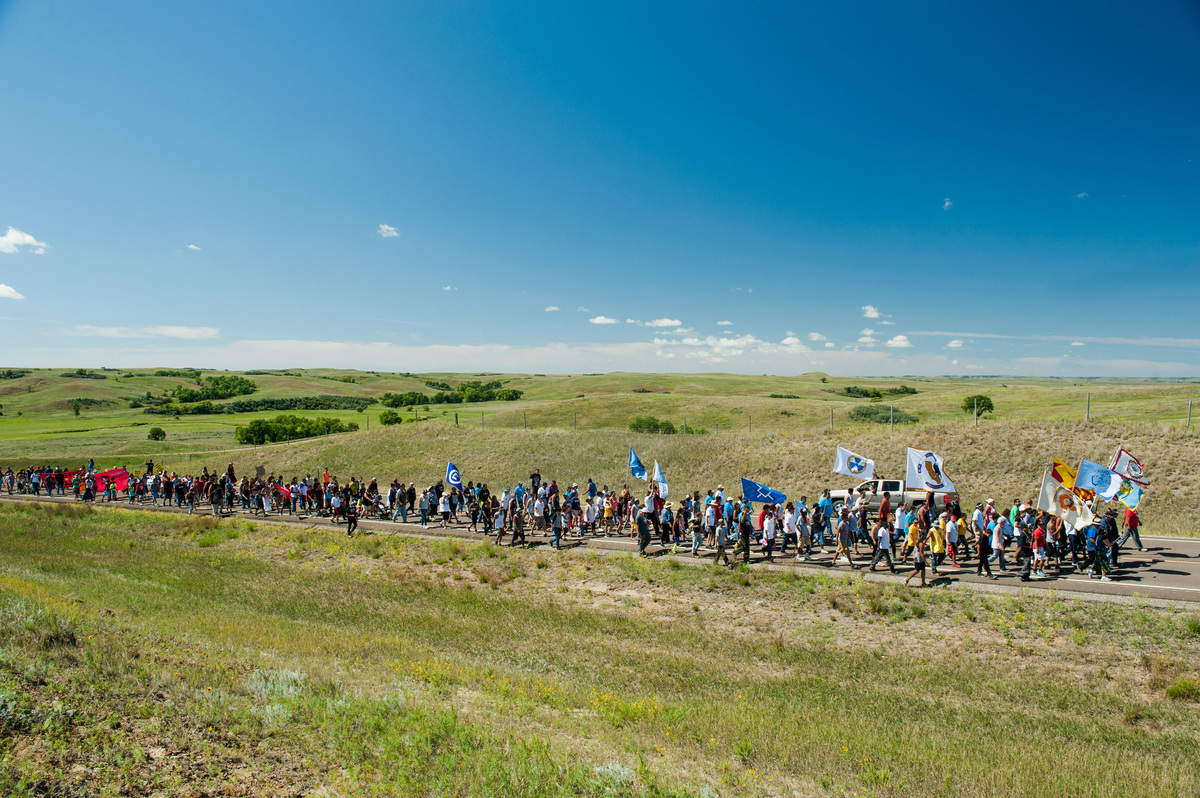 Demonstrators march from an encampment on the banks of the Cannonball River to a nearby construction site for the Dakota Access Pipeline to perform a daily prayer ceremony in September 2016.

U.S. District Judge James Boasberg temporarily halts construction on the portion of the Dakota Access Pipeline that crosses the Missouri River at Lake Oahe, pending a full decision on the tribe's earlier lawsuit against the Army Corps.

Protesters (left) wade into the Cannonball River as others (right) pray and hold flags while marching across a wooden pedestrian bridge across a creek north of the main protest camp near the Standing Rock Sioux Reservation. Emily Kask for NPR hide caption

U.S. District Judge James Boasberg denies the Standing Rock Sioux's request to stop construction. In his decision, he writes that "the United States' relationship with the Indian tribes has been contentious and tragic." But he went on to say that the Army Corps "likely complied" with its obligation to consult the tribe, adding that the tribe "has not shown it will suffer injury that would be prevented by any injunction the Court could issue."

But the Justice Department, the Department of the Army and the Interior Department announced that construction on Army Corps-controlled land near the Lake Oahe river crossing should not proceed — and asked that the pipeline company honor the request — pending further evaluation and consultation with the tribe.

Energy Transfer Partners proceeds with construction despite the request by the three federal agencies that it voluntarily halt activities near the Lake Oahe river crossing. The Morton County Sheriff arrests 27 people demonstrating at the site.

Then-President Obama says in an interview that the U.S Army Corps of Engineers is "examining whether there are ways to reroute this pipeline in a way. So we're going to let it play out for several more weeks and determine whether or not this can be resolved in a way that I think is properly attentive to the traditions of the first Americans." 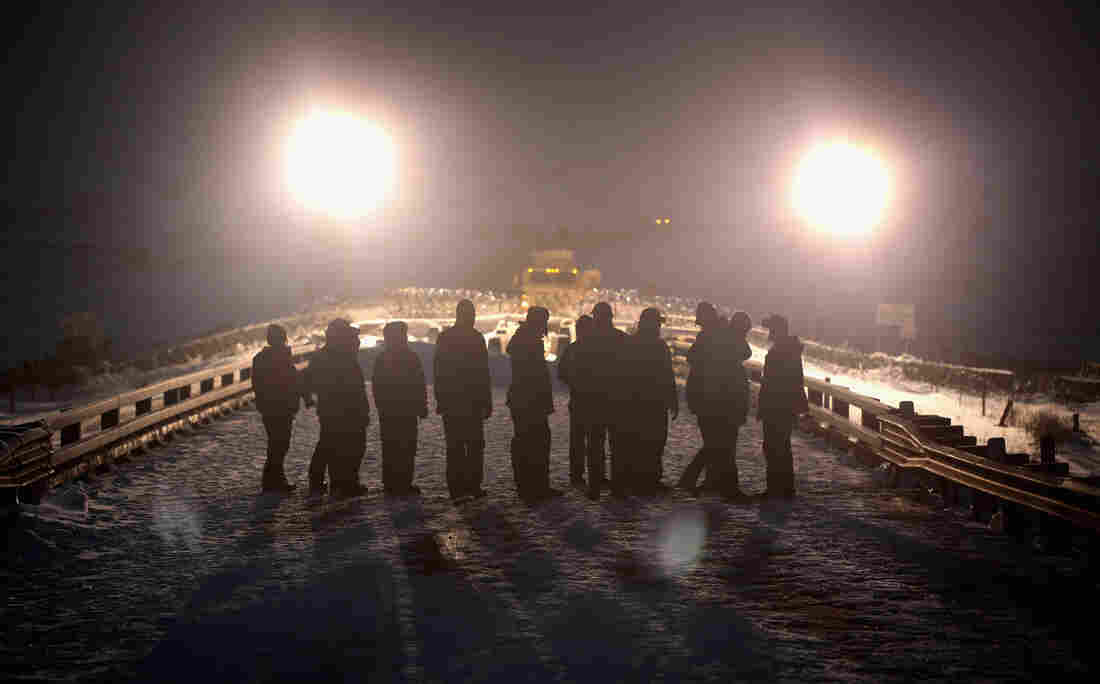 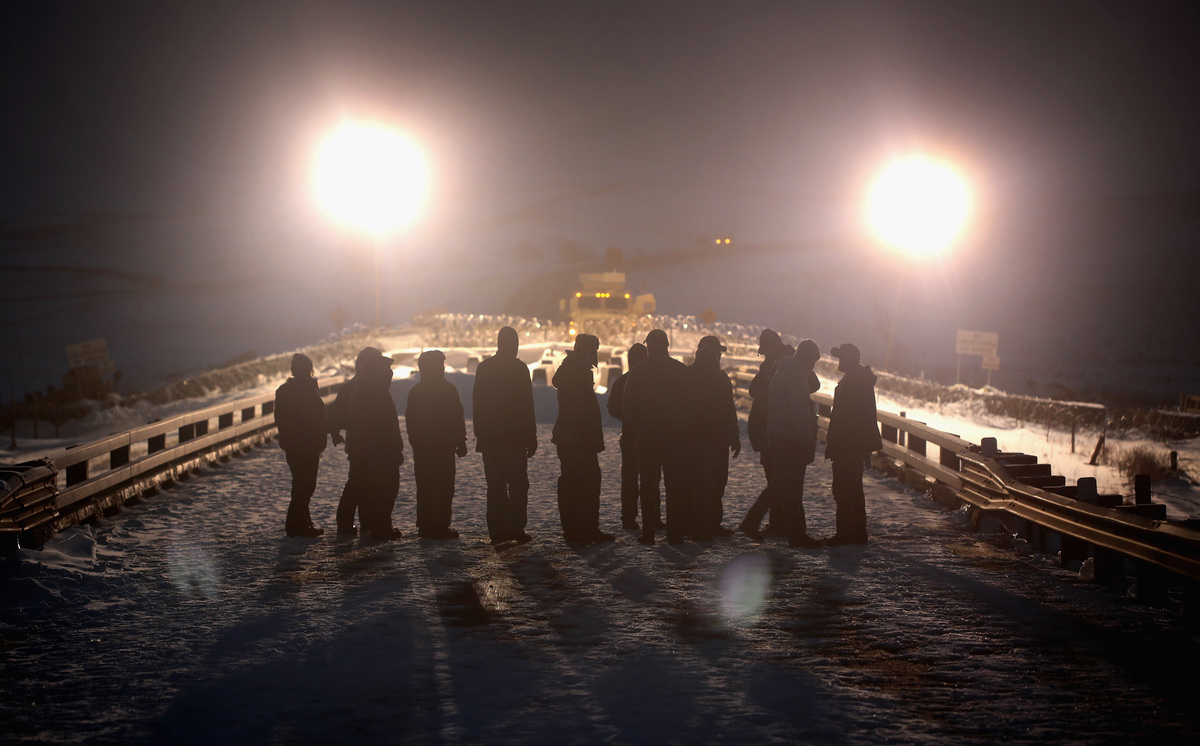 Military veterans protesting the pipeline stand opposite police guarding a bridge at the edge of the Standing Rock Sioux Reservation on Dec. 1, 2016.

Law enforcement uses tear gas and sprays water at crowds of demonstrators as the temperature drop below freezing, reports Amy Sisk of Inside Energy.

The U.S. Army Corps of Engineers tells protesters to leave some encampments on federal land by Dec. 5, and North Dakota Gov. Jack Dalrymple follows up with an evacuation order for the area, citing "harsh weather." Nonetheless, many people stay. 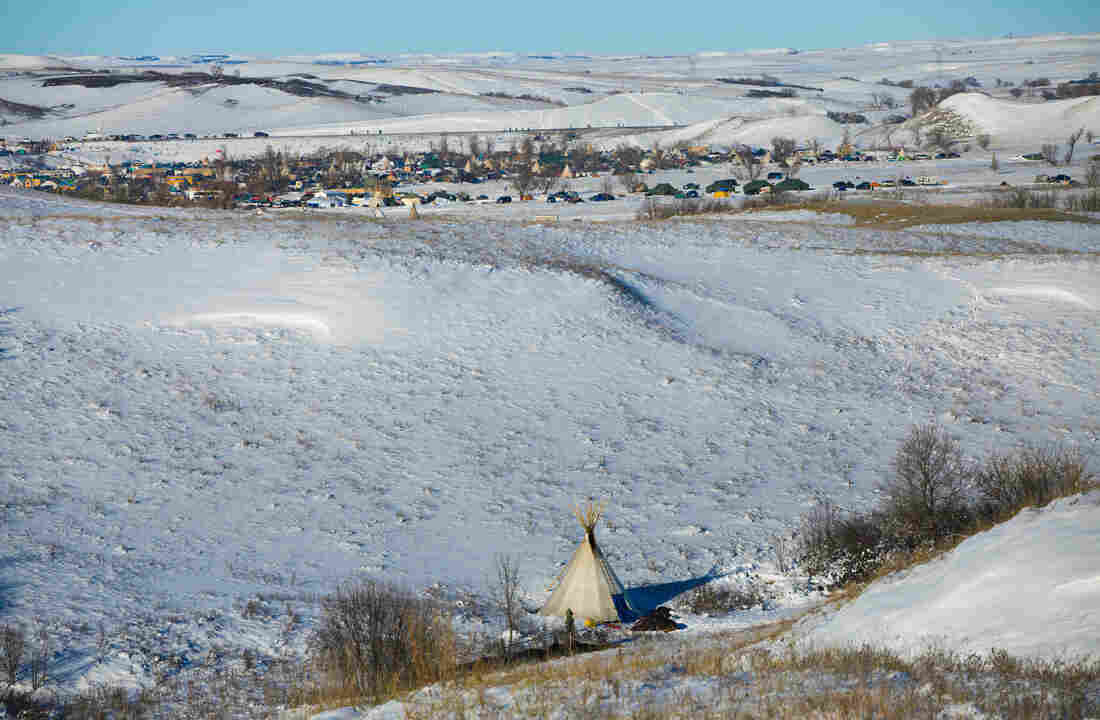 Oceti Sakowin Camp occupied by protesters can be seen in the distance on Dec. 4, 2016. Cassi Alexandra for NPR hide caption

The Army Corps halts construction of the Dakota Access Pipeline and says it intends to issue an environmental impact statement with "full public input and analysis" before it approves the river crossing at Lake Oahe.

The Army publishes a notice in the Federal Register saying it is preparing the environmental impact statement and soliciting public comments until Feb. 20, 2017, on whether to grant the easement necessary to cross under Lake Oahe.

In Their Own Words: The 'Water Protectors' Of Standing Rock

President Trump signs an executive memorandum instructing the Army to expedite the review and approval process for the unbuilt section of the Dakota Access Pipeline.

The Army says it has been directed to expedite the review process for the easement request, and that "the Assistant Secretary for the Army Civil Works will make a decision on the pipeline once a full review and analysis is completed in accordance with the [president's] directive."

The U.S. Army Corps of Engineers grants the easement allowing the Dakota Access Pipeline to cross under the Missouri River at Lake Oahe, north of the Standing Rock Sioux Reservation. The Corps also issues a memo saying it intends to terminate the public comment period and rescind its notice of intent to prepare an environmental impact assessment.

The pipeline company immediately began construction near the crossing under Lake Oahe.

The Cheyenne River Sioux tribe asks the U.S. District Court to issue a restraining order to block construction of the final piece of the pipeline. The Standing Rock Sioux Tribe officially joins the request a few days later. Both reservations get their water downstream of the Lake Oahe crossing.

U.S. District Judge James Boasberg denies the tribes' joint motion, noting that oil is not yet flowing under the reservoir. In his decision, Boasberg requires Dakota Access LLC to update the court on Feb. 21, "and every Monday thereafter as to the likely date that oil will begin to flow beneath Lake Oahe."

The Standing Rock Sioux Tribe and Cheyenne River Sioux tribe request a summary judgement against both the Army Corps and Dakota Access LLC, a subsidiary of the pipeline company.

The plaintiffs cite tribal land rights under the 1868 Ft. Laramie Treaty and argue that the Corps decision to grant the easement was "arbitrary, capricious, and contrary to law."

The Corps formally terminates its environmental review in a notice published in the Federal Register.

North Dakota Gov. Doug Burgum sets this date as a deadline for the remaining protesters to leave an encampment on federal land near the area of the pipeline company's construction site.

U.S. District Judge James Boasberg denies the motion by the Standing Rock Sioux and Cheyenne River Sioux tribes for a preliminary injunction against the pipeline company.

In his decision, Boasberg explains that he believes the tribes will be unlikely to prevail in their lawsuit at this point, and denies their request to either halt construction on the pipeline, or stop oil from flowing through it once it is complete.

The previously filed motion for summary judgement is still outstanding.