Accessibility links
VX: The Nerve Agent Used To Kill Kim Jong Nam Is Rare And Deadly : The Two-Way A colorless, odorless liquid, similar in consistency to motor oil, VX kills in tiny quantities that can be absorbed through the skin. It is among the deadliest chemical weapons ever devised. 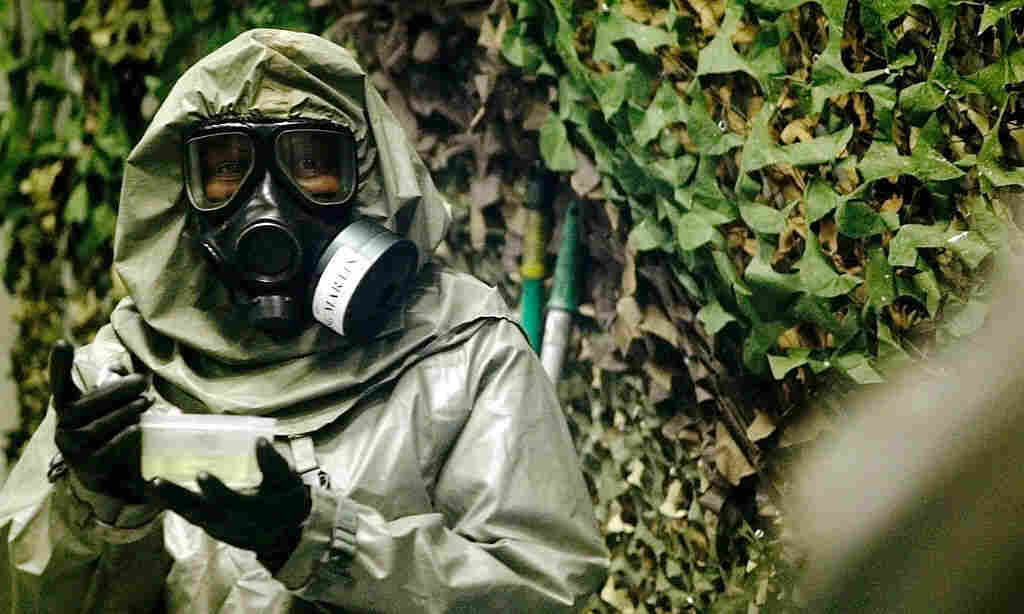 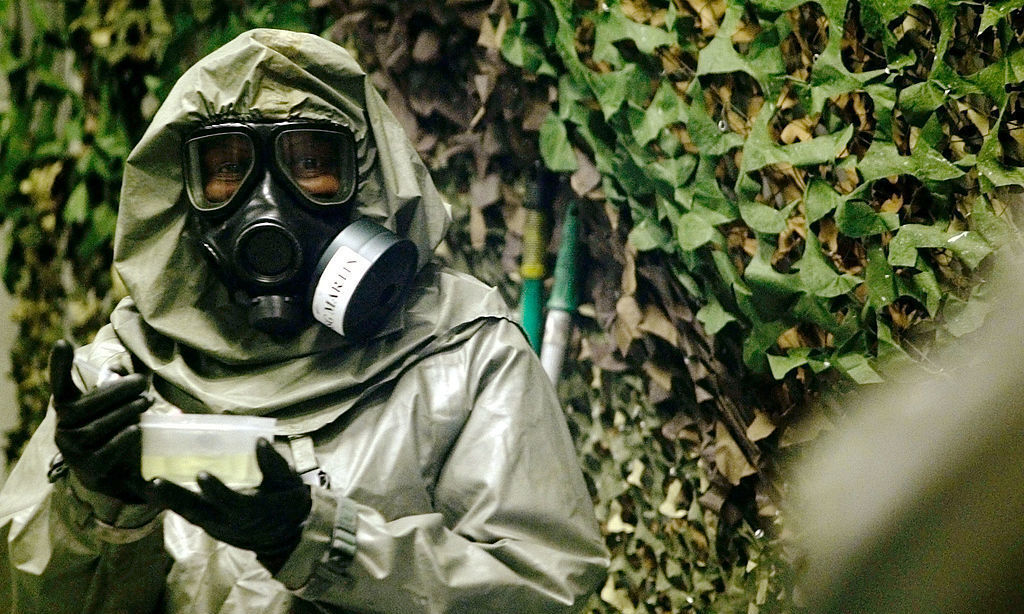 An instructor at Fort Leonard Wood, Mo., carries VX nerve agent inside a special chamber used for training in 2003.

When the half-brother of North Korean leader Kim Jong Un collapsed at a Malaysian airport last week, poisoning was instantly suspected. But on Friday, Malaysian authorities revealed that an autopsy had turned up not just any poison, but a rare nerve agent known as VX.

VX is among the deadliest chemical weapons ever devised. A colorless, odorless liquid, similar in consistency to motor oil, it kills in tiny quantities that can be absorbed through the skin. A relative of the nerve agent Sarin, VX disrupts communications between nerves and muscles. Victims of VX initially experience nausea and dizziness. Without an antidote, the chemical eventually paralyzes the diaphragm, causing suffocation.

That may have been the fate of Kim Jong Nam, the estranged half-brother of North Korea's leader. Security footage showed that Kim was approached by two women who appeared to cover his face with a cloth. Moments later, he fell ill and sought help. He died before reaching a hospital.

If the Malaysian analysis is correct and VX was the culprit, that would seem to suggest that the North Korean state itself is behind the killing.

"Hardly anybody has it," says Dan Kaszeta, a chemical weapons expert and consultant based in London. The U.S. has destroyed nearly all of its stocks of VX in recent years.

North Korea is among the few states in the world that have an active chemical weapons program. It is not a signatory to the Chemical Weapons Convention, which bans the use of such weapons. The South Korean government estimates that Pyongyang has somewhere between 2,500 to 5,000 tons of various agents in its arsenal. That likely includes VX, says Joseph Bermudez, an analyst with the website 38 North who has looked at North Korea's program in depth.

Kaszeta, who was once an officer in the U.S. Army Chemical Corps, says VX and agents like it are designed for long-term contamination of a battlefield. Once VX is spread over equipment or facilities, it stays there for long periods of time. Before it was banned, countries such as the U.S. and Russia stockpiled VX in large quantities with the intention of rendering strategic targets, like ports, useless.

But its lethality and stability could also make it a good tool for assassination, Kaszeta says. A tiny quantity could be sealed in a glass container with no ill effects, and it wouldn't be readily detectable by authorities. Because VX does not evaporate easily, it would not contaminate the surrounding air. That might explain why no one else at the Malaysian airport appears to have fallen ill.

It remains unclear whether the Malaysian authorities will seek to verify their VX detection with official bodies like the Organization for the Prohibition of Chemical Weapons.

"OPCW stands ready to provide its expertise and technical assistance, if required, to any State Party to the Chemical Weapons Convention," the agency said in a statement.

North Korea's official news agency has denied the country had any role in the death. It has blamed Malaysia for fabricating evidence of a murder at the behest of South Korea.