Accessibility links
Humans Are The Leading Cause Of Wildfires In The U.S. : The Two-Way More than 8 in 10 fires are started by people. Researchers say humans are not only causing the vast majority of wildfires, they're extending the normal fire season around the U.S. by three months. 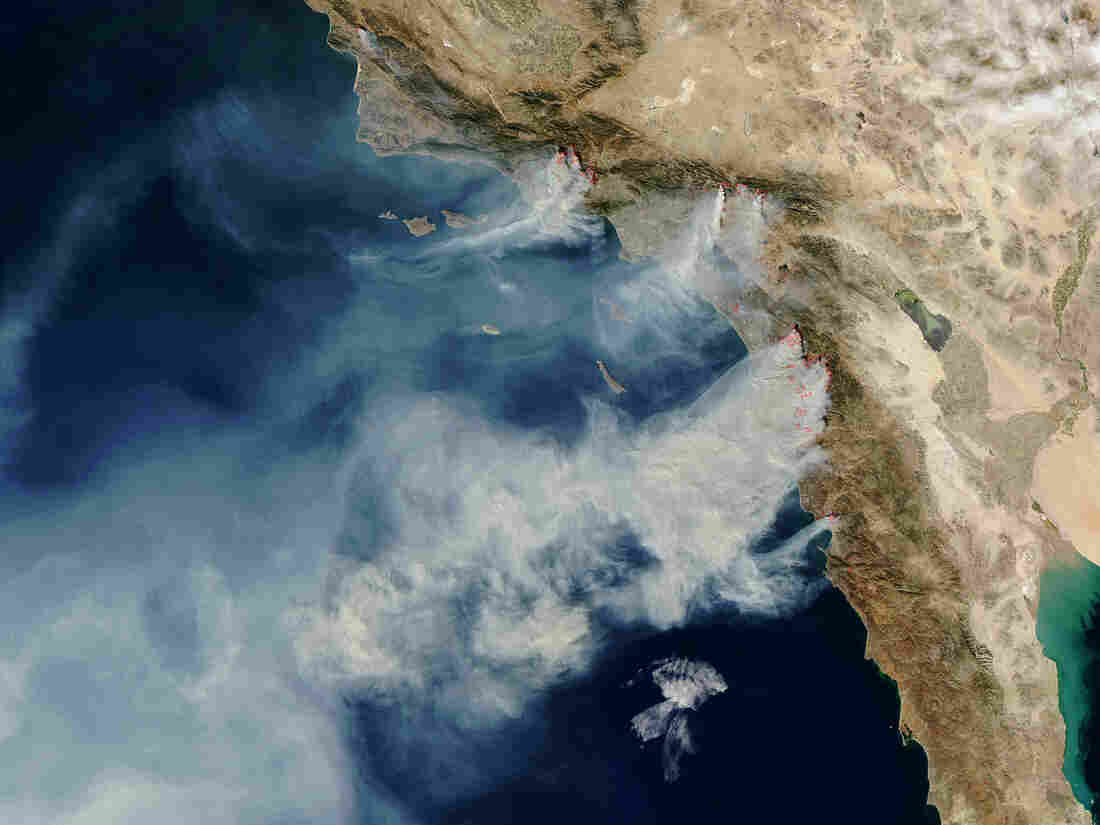 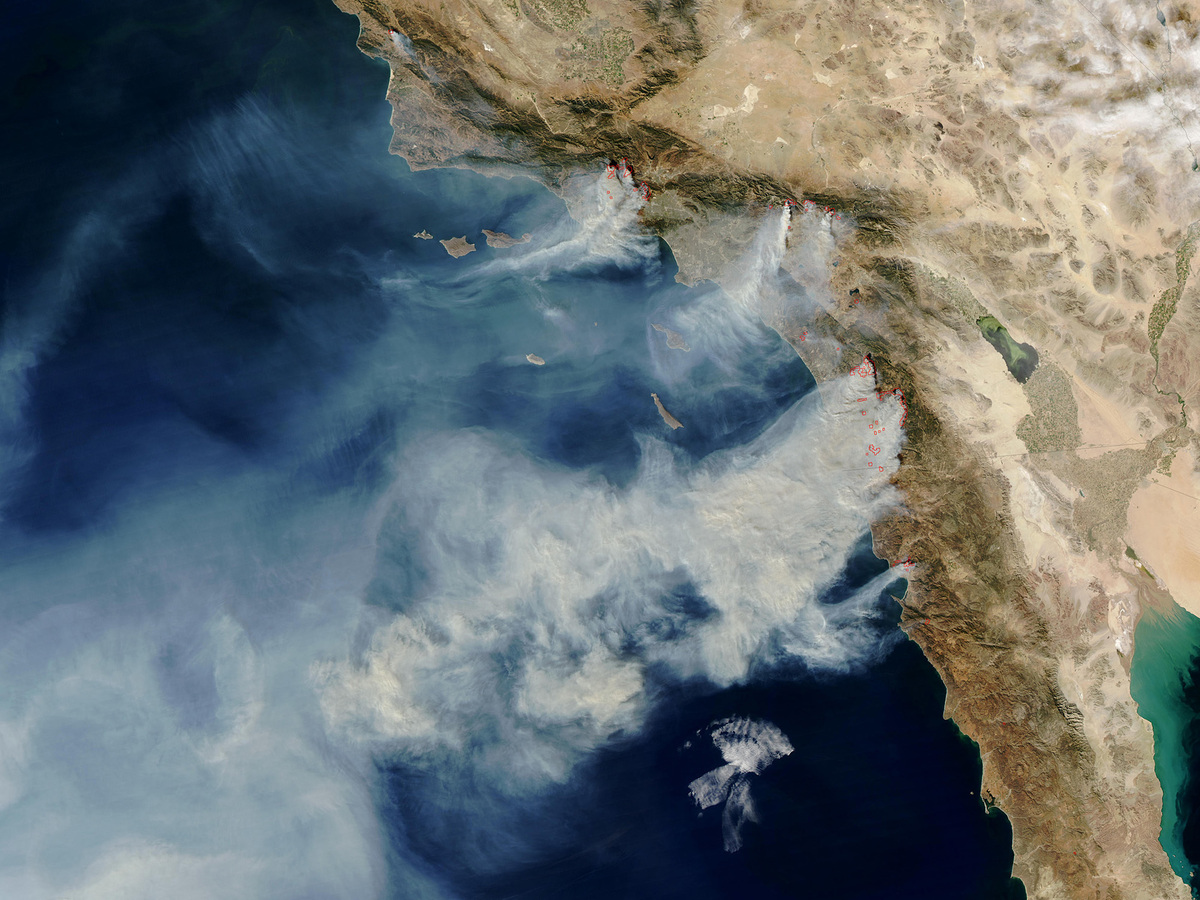 More than 10 wildfires burned over 200,000 acres in Southern California in October 2003, many of them started by humans. This satellite image shows strong winds carrying smoke over the Pacific.

Wildfires can start when lightning strikes or when someone fails to put out a campfire. New research shows that people start a lot more fires than lightning does — so much so that people are drastically altering wildfire in America.

But the average for all forests is even higher. The latest research shows that nationwide, humans cause more than 8 in 10 — 84 percent.

"We are playing a really substantial role in shifting fire around," says fire ecologist Jennifer Balch at the University of Colorado. Balch looked at the big picture, going through records of 1.5 million wildfires over a 21-year period. She says people are starting fires where and when nature normally doesn't — at times when forests are often too wet to burn easily or at places and times when lightning isn't common.

As a result, Balch says, not only are people causing the vast majority of wildfires, they're also extending the normal fire season around the country by three months. 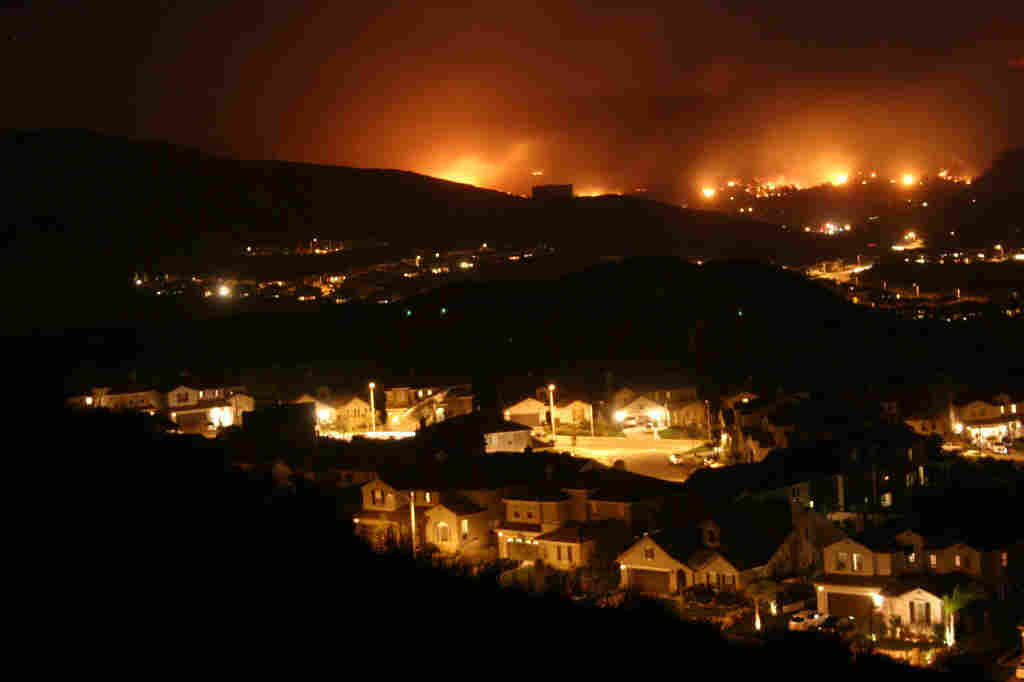 Wildfires burned in the hills of Santa Clarita, Calif., threatening suburban development in October 2007. This fire was among more than a dozen major wildfires, many of which were started from human-related ignitions. Jeff Turner/Wikimedia hide caption 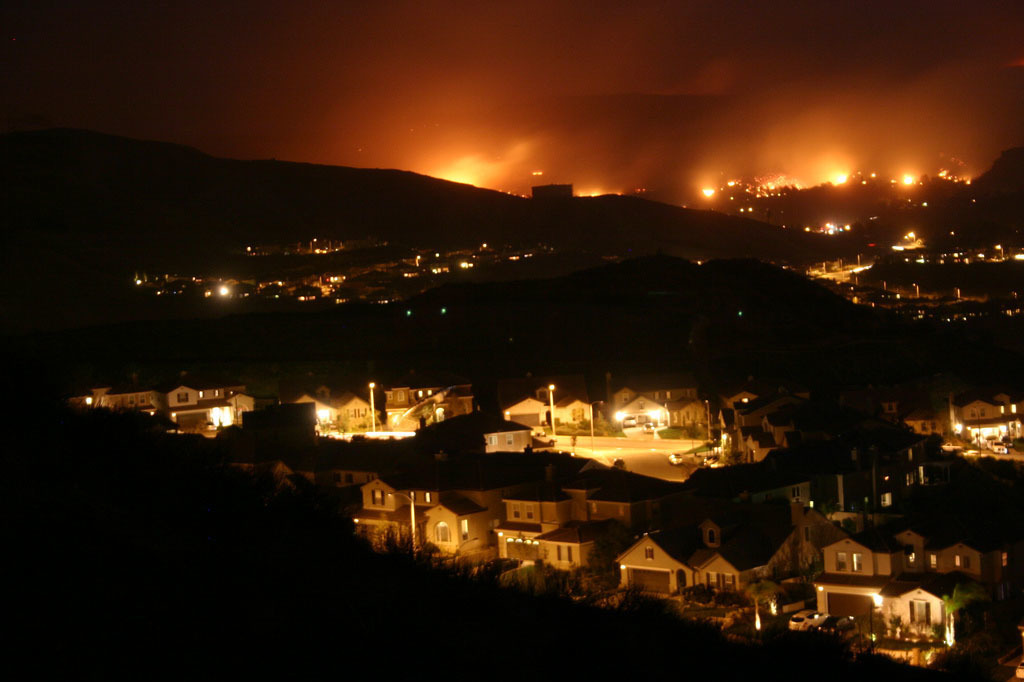 Wildfires burned in the hills of Santa Clarita, Calif., threatening suburban development in October 2007. This fire was among more than a dozen major wildfires, many of which were started from human-related ignitions.

"I think acknowledging that fact is really important," she says, "particularly right now when we have evidence that climate is changing, and climate is warming, and that fires are increasing in size and the fire season is increasing."

You can see evidence of that along Skyline Drive in Virginia. The view offers an Appalachian panorama — rolling mountains carpeted in deep oak and pine forests. But it's not all green, as Forder points out from the side of the highway at Two-Mile Run Overlook at Shenandoah National Park. Right below stands a grove of blackened trees; a few patches of green needles on surviving pines are the only green.

"We can see where it started," she says. "That's Rocky Mount right there." The mountain is the namesake for the Rocky Mount fire, which burned more than 10,000 acres last year.

"We were probably 10-plus days without rain" before the fire, he says, "so you know it was expected. It was that time of year when you can expect fire activity."

It was April, and spring and fall are when forests in the east usually burn, explains Forder, who also is with the National Park Service. "To have a fire," she says, "you need the fuel, which is available each spring and fall with the leaf litter, which is constantly here, and the ignition source, and then weather conditions that would allow the fire to burn."

That ignition source at Rocky Mount is thought to have been people. There was no lightning at the time; lightning fires happen more during summer storms.

Writing in the Proceedings of the National Academy of Sciences, Balch says there is a solution: Ironically, it means starting more fires.

Prescribed fires are intentionally lit — they burn off leaf litter and underbrush that would otherwise fuel bigger wildfires. Controlled fires also help germinate the seeds of many tree species. But people don't like them nearby; they're smoky and sometime get loose. "Now the question is, can we live with the amount of prescribed fires that we need in ecosystems?" she says. "Can we live with the smoke that comes off those fires?"

The research, she says, suggests that the alternative is a year-round season of bigger, more damaging fires.