Accessibility links
Trump Aims To 'Eliminate' Clean Water Rule : The Two-Way The Obama-era "Waters of the United States" rule defines which small bodies of water are subject to U.S. authority. Opponents such as farmers, homebuilders and golf course owners say it goes too far. 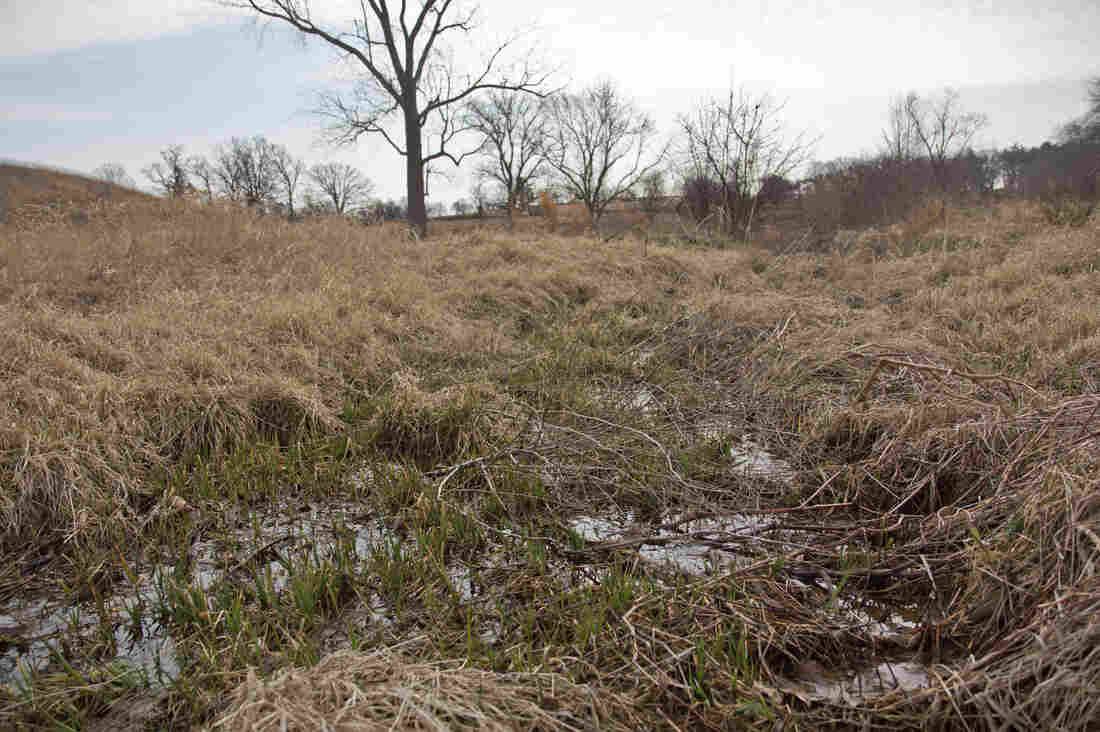 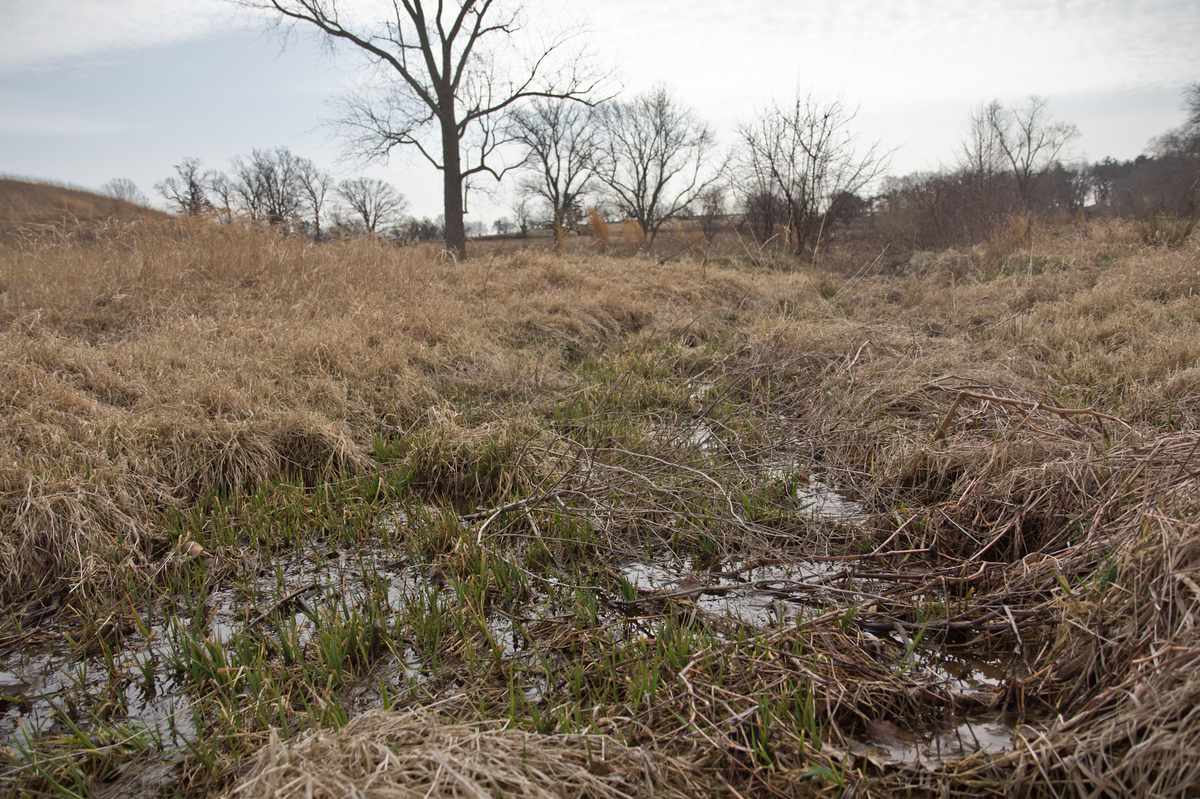 Massey Run, an intermittent stream that runs into Crum Creek in Pennsylvania's Chester County, is impacted by the Waters of the United States rule.

The Trump administration is moving to roll back an environmental rule intended to define which small bodies of water are subject to federal authority under the Clean Water Act.

President Trump signed documents Tuesday directing the Environmental Protection Agency and the U.S. Army Corps of Engineers to review the Obama administration's "Waters of the United States" rule. In doing so, Trump said he is "paving the way for the elimination" of the rule.

He asked for the reviewers to assess its consistency with "promoting economic growth" and "minimizing regulatory uncertainty," among other factors.

Supporters say the regulation is needed to ensure safe drinking water. But a long list of opponents say it goes too far and poses a burden on them. The rule is currently on hold after a stay by the 6th U.S. Circuit Court of Appeals.

"It was a massive power grab," Trump said as he prepared to sign the documents, surrounded by a group of farmers, homebuilders and county commissioners. "Regulations and permits started treating our wonderful small farmers and small businesses as if they were a major industrial polluter. They treated them horribly."

But as NPR's Greg Allen has reported, "overturning the rule isn't something that can be done through executive order. The EPA would have to restart the lengthy rule-making process, according to Jon Devine, an attorney with the Natural Resources Defense Council."

Trump's executive order has been sharply criticized by environmental groups. Earthjustice accused the president of "demonstrating that he puts the interests of corporate polluters above the public's health."

When the Clean Water Act passed in 1972, it defined waters that would need protection from pollution as "navigable." For most of us, that means big enough to float a boat. Over the years, though, it became clear that smaller streams and wetlands needed protection as well, especially those that feed into rivers and lakes that provide drinking water. But Congress and successive administrations tried, and failed, to clarify exactly which waters were subject to the act. The Army Corps of Engineers interpreted the act differently in different regions of the U.S., and courts only added to the confusion.

But it faced heavy criticism and lobbying against the rule from farmers, the U.S. Chamber of Commerce, real estate developers and golf course owners, among others.

In Tuesday's executive order, Trump said that in any future proposed rule, the EPA and the U.S. Army Corps of Engineers should consider Justice Antonin Scalia's opinion in a 2006 Supreme Court ruling, which focused on the scope of the Clean Water Act.

In that case, Scalia stated that the "waters of the United States" are limited to "only relatively permanent, standing or flowing bodies of water." He added: "The phrase does not include channels through which water flows intermittently or ephemerally, or channels that periodically provide drainage for rainfall."

After the 2015 rule, Owen McDonough of the National Association of Homebuilders said a developer who buys a rural piece of land "is all of a sudden faced with jurisdiction waters, and then he has to secure federal permits, and offset his impacts." He said builders must hire expensive environmental consultants to get those permits.

Last August, then-candidate Trump echoed that criticism when he addressed the homebuilders association. It's worth noting that Trump has a stake in the rule's fate. As Greg has reported, the Trump Organization has about a dozen golf courses across the U.S.

And the president's new EPA chief, Scott Pruitt, sued the agency over the water rule when he was Oklahoma's attorney general.

The American Farm Bureau Federation also launched a campaign called "Ditch the Rule." In an ad featuring a farmer's wife running barefoot in a field, it asserted that the Waters of the U.S. rule would force farmers to get a permit for every ditch or puddle on their land. The bureau also says the rule goes overboard by including so-called prairie potholes, which don't have water in them year-round.

"The [Obama] administration really belittled a lot of farmers' concerns," says the Farm Bureau's Don Parrish. He says growers who fail to get a needed permit could face heavy fines or even jail time.

But Ellen Gilinsky, a former EPA administrator who advised on the Waters of the U.S. Rule, says many such fears are overblown. She says the rule actually reduced the number of ditches that would require permits and that both farmers and ranchers have numerous exemptions.

"I really think there's a lot of blood shed over this rule that didn't need to be," Gilinsky says. "I think there's an opportunity to take another look at it and bring everyone to the table and get a rule everyone can feel good about."

Supporters of the Waters of the United States rule say states simply don't have the resources to ensure healthy streams and clean drinking water on their own. Gilinsky says she hopes the Trump administration can finally get all sides to agree on which waters the federal government should protect.

Susan Phillips is a reporter with StateImpact Pennsylvania.

An earlier version of this story said Massey Run stream is located in Pennsylvania's Montgomery County. In fact, it is in Chester County.