Accessibility links
Racist Assault At A Child's Birthday Party Yields Long Prison Terms In Georgia : The Two-Way The defendants, who have three children together, wept as a judge sentenced them to a combined 19 years in prison for their role in a white supremacist group's rampage. 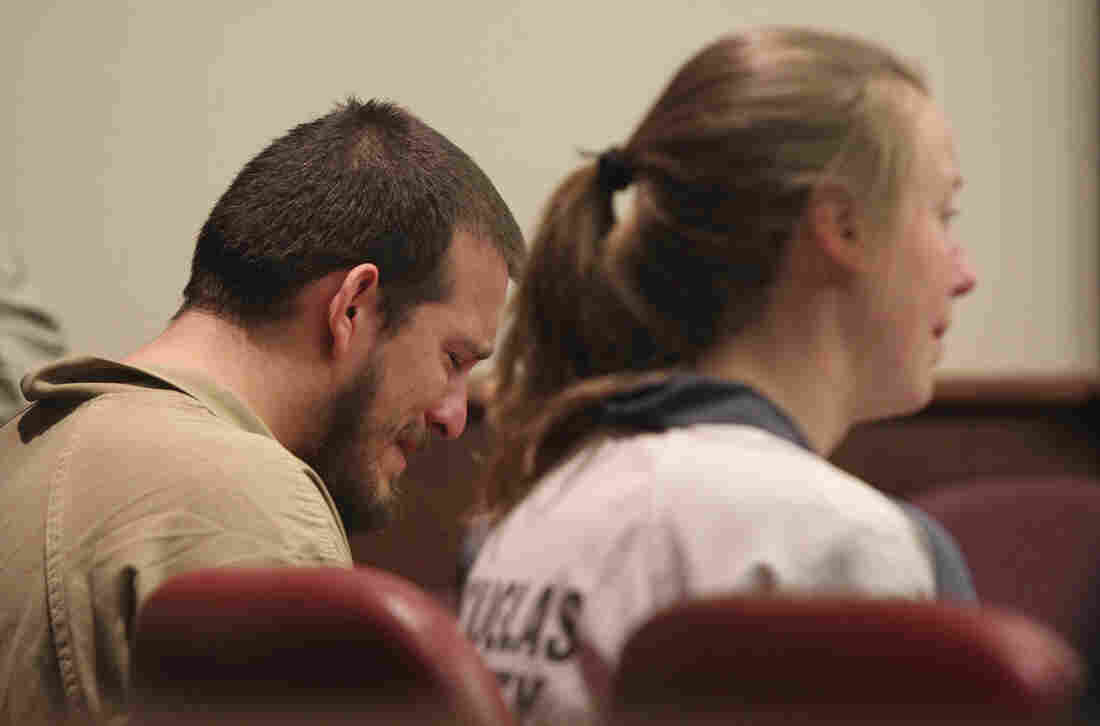 Jose "Joe" Torres (left) weeps in his seat during his sentencing at the Douglas County Courthouse in Douglasville, Ga., on Monday. Superior Court Judge William McClain sentenced Torres and Kayla Norton to lengthy prison terms Monday for their role in the disruption of a black child's birthday party through the use of Confederate battle flags, racial slurs and armed threats. Henry P. Taylor/Atlanta Journal-Constitution via AP hide caption 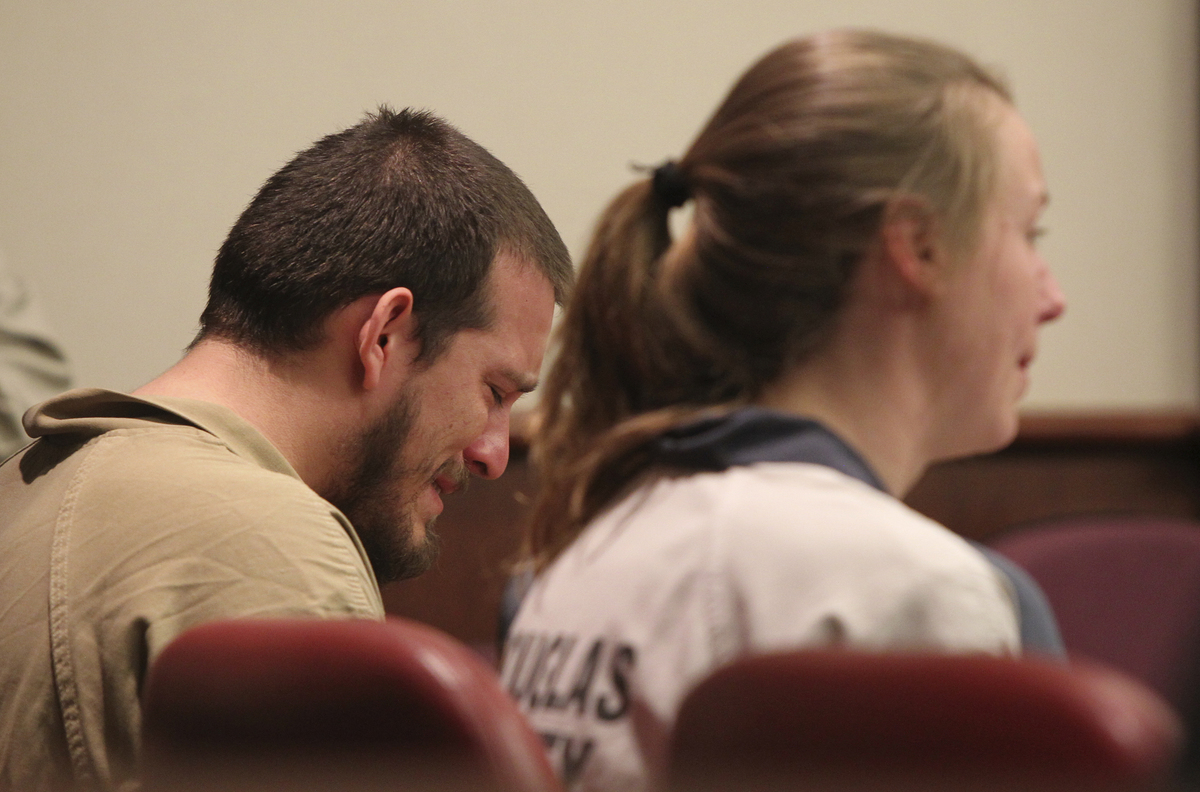 Jose "Joe" Torres (left) weeps in his seat during his sentencing at the Douglas County Courthouse in Douglasville, Ga., on Monday. Superior Court Judge William McClain sentenced Torres and Kayla Norton to lengthy prison terms Monday for their role in the disruption of a black child's birthday party through the use of Confederate battle flags, racial slurs and armed threats.

A Georgia judge has sentenced Kayla Norton, 25, and Jose "Joe" Torres, 26, to spend a combined 19 years in prison for their role in a group's racist rampage at an 8-year-old's birthday party — an assault that included shouting racial slurs, making armed threats and waving Confederate battle flags.

"I'm so sorry that happened to you," Norton told the family that endured the assault, weeping in the courtroom at Monday's sentencing. "I am so sorry."

After telling the court that she accepted responsibility for her actions, Norton turned to the area of the courtroom where families who attended the birthday party were seated.

Norton and Torres, who are not married, have three children together. Prosecutors say they were part of a gang of white supremacists who targeted African-Americans with racist taunts and threatened to murder minorities.

The sentencing comes weeks after a jury found Torres and Norton guilty of making terroristic threats and violating the Georgia Street Gang Terrorism and Prevention Act. The jury also convicted Torres of aggravated assault. Although Georgia doesn't have a law specifying a hate crime, that's the term both McClain and District Attorney Brian Fortner used to describe the group's behavior.

The assault occurred in July 2015, one month after a racist gunman killed nine worshippers at a historically black church in Charleston, S.C. Prosecutors say Norton, Torres and other members of a group that called itself "Respect the Flag" went on an alcohol-fueled racist spree in Douglas and Paulding counties, west of Atlanta.

With Confederate battle flags affixed to the beds of their pickup trucks, the group gathered for a ride that was purportedly meant to celebrate the flag's heritage.

"However, Paulding County 911 began immediately receiving calls that members associated with this group were threatening African American citizens at various locations in Paulding County and hurling numerous racial slurs in the process as well," according to the Douglas County District Attorney's Office.

After threatening black motorists, the group headed to Douglasville, where they happened upon an outdoor birthday party that included a cookout and bouncy castle.

"Victims and witnesses from the party, who were predominantly African-American, testified to observing the group of trucks whose passengers were hurling a litany of racial slurs at them as they passed by," prosecutors said.

Several members of the group — some of whom are now serving prison terms of their own — got out of their trucks and approached the partygoers, threatening to kill them all. According to their fellow defendants and witnesses, it was Norton who retrieved Torres' shotgun — a tactical 12-gauge with a pistol grip — and loaded it before giving it to him.

Cellphone footage from the party shows police attempting to form a barrier in front of the families as the trucks drove off.

During his trial, Torres told the court he was carrying the shotgun for this own defense. But he then acknowledged lying to police about the gun — and to selling the weapon before he was arrested.

Months after the attack, the "Respect the Flag" group was indicted as a street gang by a Douglas County grand jury.

"They recognized that it was not about flying a flag but it was about pointing a shotgun at other people and threatening to kill them because of the color of their skin," Fortner said Monday.

Testifying for the victims at Monday's sentencing, Hyesha Bryant, who attended the party, said she forgave the couple.

"I never thought this would be something I'd have to endure in 2017," Bryant said, according to the Atlanta Journal-Constitution. "As adults and parents, we have to instill in our children the values of right and wrong. That moment you had to choose to leave, you stayed."

"I forgive you. I forgive all of you," she said, as Torres and Norton sat weeping. "I don't have any hate in my heart. Life is too short for that."

The stiff punishment is being both celebrated and questioned, in a debate that touches on free speech and the nature of terrorism.

Some of those points are summed up in two top-rated responses to the district attorney's Facebook posting that announced the punishment.

"To all the people on here saying the punishment was unjust. Let's be real, if it had been any other terrorist group committing these felonies you guys wouldn't bat an eye if they went away for life.... but when the terrorist look like you all of a sudden you get a soft heart."

But another commenter says:

"Did they actually attack anyone or just guilty of being racists? Not condoning their actions by any means but I'm not sure the punishment fit the crime here. If they attacked the kids or something, let them rot, but just being ignorant racists shouldn't constitute a 20 year sentence. Does that not seem a little extreme?? What am I missing? If everyone in Douglas County that is ignorant and racist (on both sides of the fence) had to serve 20 years, they'd have to build many new jails."