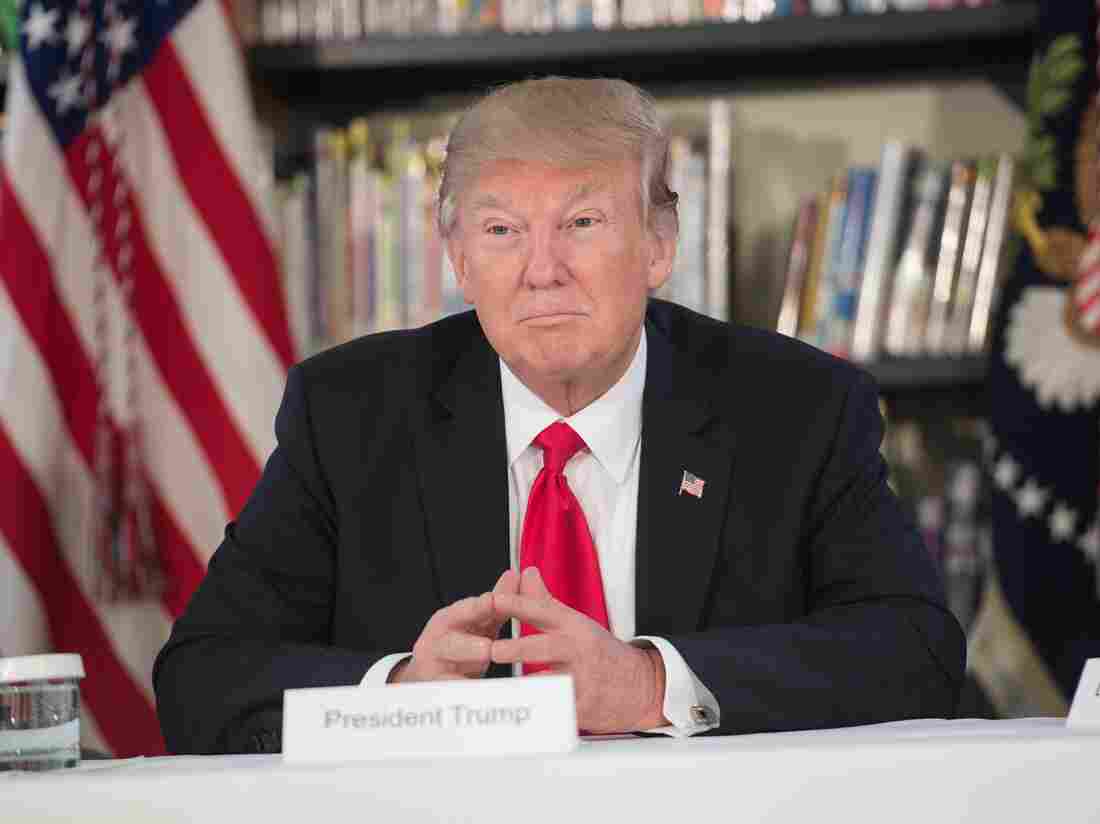 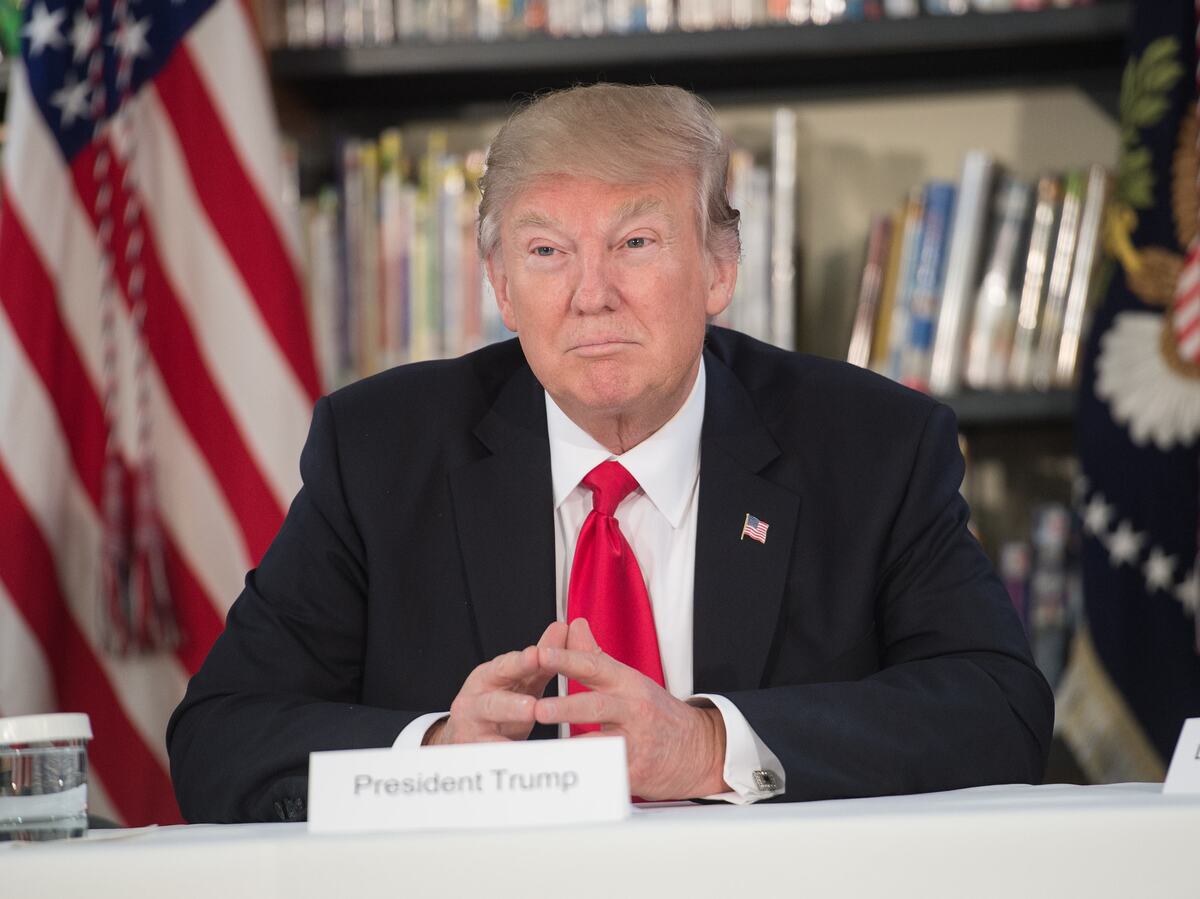 President Donald Trump looks on as he meets with parents and teachers at Saint Andrew Catholic School in Orlando, Fla., on March 3.

In a string of tweets posted early Saturday morning, President Trump let loose a barrage of accusations at his predecessor. He alleged that former President Obama had his "wires tapped" in Trump Tower before Election Day last year, accusing Obama of "McCarthyism" and being a "bad (or sick) guy."

Trump, who is under significant scrutiny for his administration's contacts with Russia before he took office, offered no evidence to support his claims Saturday morning.

Trump's press secretary, Sean Spicer, released a statement Sunday — which you can read in full at the bottom of this post — saying the White House is asking Congress to investigate "whether executive branch investigative powers were abused in 2016."

Obama spokesman Kevin Lewis dismissed the allegation Saturday in a statement, which you can read below.

Trump opened his volley on Twitter Saturday morning with a defense of his embattled attorney general, Jeff Sessions, who recused himself earlier this week from any investigations into Russian intervention in the presidential election. Sessions has been embroiled in controversy for two meetings he held with the Russian ambassador to the U.S. last year, which appear to contradict a statement he made to the Senate in his confirmation hearings.

"The first meeting Jeff Sessions had with the Russian Amb was set up by the Obama Administration under education program for 100 Ambs," Trump tweeted. Later, Trump added that the same Russian ambassador, Sergey Kislyak, visited the White House under Obama "22 times, and 4 times last year alone."

In the midst of these defenses, the sitting president accused the former president of " 'wire tapping' a race for president prior to an election."

"Terrible!" Trump tweeted. "Just found out that Obama had my 'wires tapped' in Trump Tower before the victory. Nothing found. This is McCarthyism!"

Terrible! Just found out that Obama had my "wires tapped" in Trump Tower just before the victory. Nothing found. This is McCarthyism!

Is it legal for a sitting President to be "wire tapping" a race for president prior to an election? Turned down by court earlier. A NEW LOW!

I'd bet a good lawyer could make a great case out of the fact that President Obama was tapping my phones in October, just prior to Election!

How low has President Obama gone to tapp my phones during the very sacred election process. This is Nixon/Watergate. Bad (or sick) guy!

Lewis, Obama's spokesman, rejected the allegation that the former president was involved in surveillance:

Trump did not produce evidence to support his assertions, nor did he cite the source of his information — though on Weekend Edition Saturday, NPR's Ron Elving notes the fact that Trump says he "just found out":

"It appears perhaps to be a response to a narrative in Breitbart.com, the right-wing website that was previously published by Steve Bannon, the president's senior adviser.

"There, you will find a narrative about how the Obama administration was so intent on thwarting Donald Trump last fall that they had much of the intelligence community doing everything it could to gather skullduggery and information about Donald Trump.

"And that would have included, according to Donald Trump, wiretapping his phones. But there does not seem to be any direct evidence of that."

"That is an extraordinary thing to hear from a sitting president about his predecessor," NPR's Mary Louise Kelly notes on Weekend Edition Saturday. For our Newscast unit, Mary Louise adds: "Tapping his phones would require a warrant from the foreign intelligence surveillance court."

She also says the director of national intelligence is declining comment.

The FBI has opened an investigation into allegations of Russian interference in the 2016 election to boost Trump's campaign. Congressional intelligence committees are currently reviewing documents related to possible links between Russian officials and the campaign, as well as recent leaks of classified information.

Shortly after his final tweet about Obama, which says "this is Nixon/Watergate," Trump turned his attention to other matters, berating Arnold Schwarzenegger, his successor on Celebrity Apprentice. Schwarzenegger announced Friday he was leaving the show, blaming the show's recent poor ratings on Trump.

"President Donald J. Trump is requesting that as part of their investigation into Russian activity, the congressional intelligence committees exercise their oversight authority to determine whether executive branch investigative powers were abused in 2016.

"Neither the White House nor the President will comment further until such oversight is conducted. "