Accessibility links
North Korea Test-Fires 'Unknown Projectiles' Into Japan Waters, South Korea Says : The Two-Way The projectiles were launched Sunday from near North Korea's missile base of Tongchang-ri, says South Korea's military. At least one of the missiles flew about 620 miles. 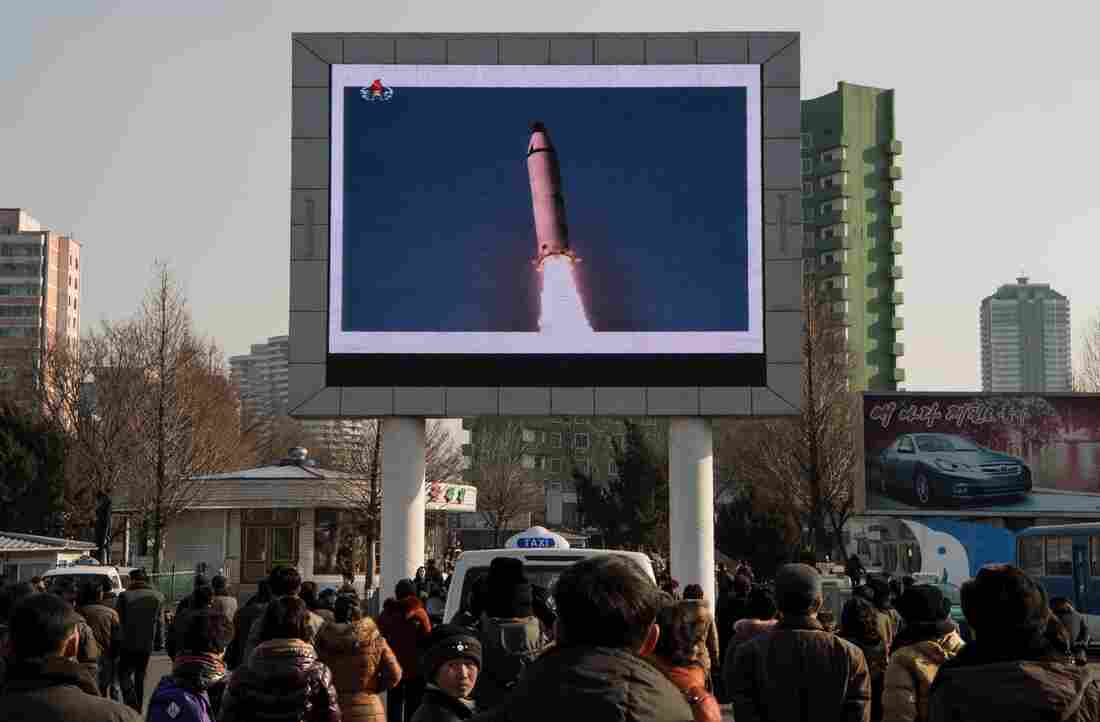 On Feb. 13, people in Pyongyang watch a public broadcast regarding the Feb. 12 launch of a long-range ballistic missile at an undisclosed location — the first fired in Donald Trump's presidency. The U.N. Security Council on Feb. 13 unanimously condemned the missile test by North Korea. Kim Won-Jin/AFP/Getty Images hide caption 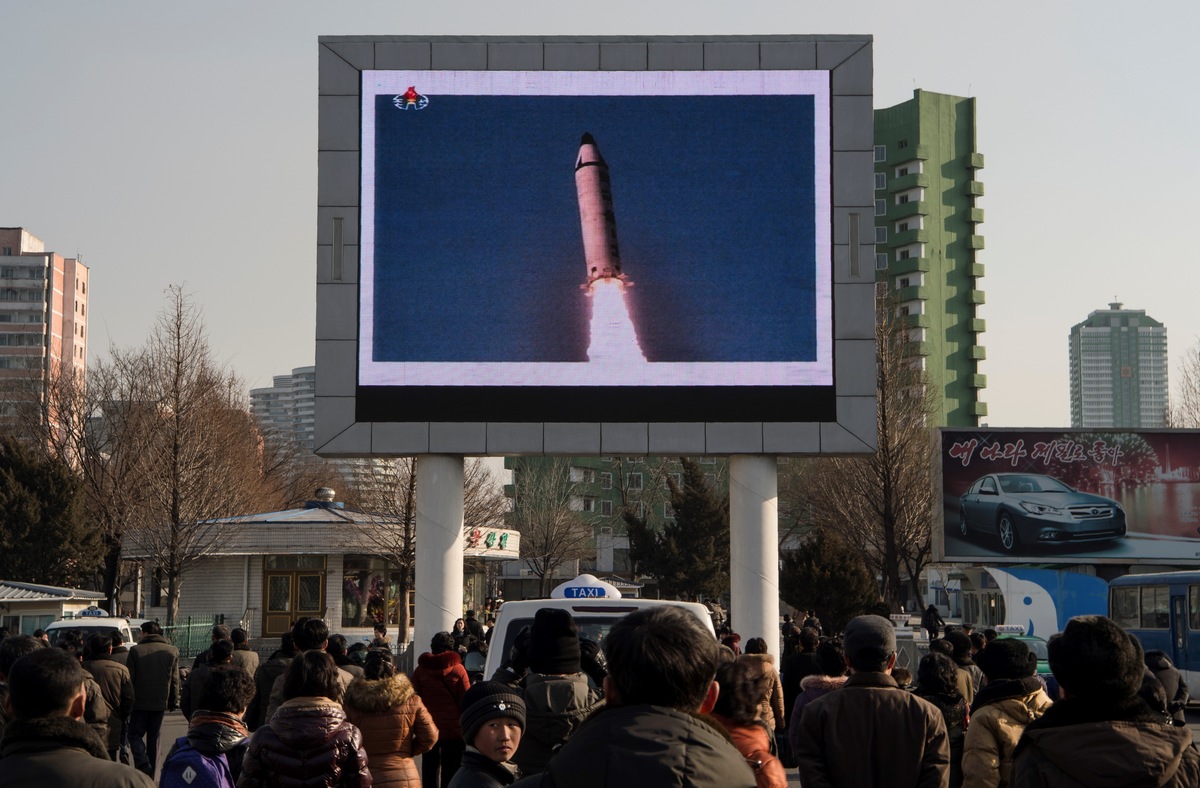 On Feb. 13, people in Pyongyang watch a public broadcast regarding the Feb. 12 launch of a long-range ballistic missile at an undisclosed location — the first fired in Donald Trump's presidency. The U.N. Security Council on Feb. 13 unanimously condemned the missile test by North Korea.

South Korea's military says North Korea has test-fired a handful of "unknown projectiles" off its west coast into its east coast waters, further rattling an already uncertain situation on the Korean peninsula under ongoing political drift in Seoul and a new American administration.

The projectiles were launched from near one of the North's known missile bases of Tongchang-ri at 7:36 a.m. local time, or 5:36 p.m. Sunday (EST). South Korea believes at least one of the missiles flew 1,000 km, or about 620 miles. That's twice the distance as the North's most recent missile test, in February.

"North Korea has ignored South Korea and the international community's constant warnings," said Hwang Kyo-ahn, South Korea's acting president, in a statement. "This shows the North's nuclear and missile provocations are a real and imminent threat to our people's safety."

Japan's government says it counted four missiles landing in the Sea of Japan, the body of water between Korea and Japan. It says three of them fell in Japan's exclusive economic zone.

"Launching missiles at this time shows clearly that North Korea has become a new menace for Japan," said Japanese Prime Minister Shinzo Abe, before saying he will head to a meeting of the Japanese National Security Council later today.

These missile tests are banned by the U.N. Security Council, but North Korea frequently flouts the rules. Monday's test marks the second such firing of 2017. Last year, it fired missiles 24 times, launched a rocket (largely viewed as a trial for an intercontinental ballistic missile) in February and tested nuclear devices twice.

Longtime military analyst Daniel Pinkston, lecturer in international relations at Troy University, says he is concerned not only by the missile tests but also the recent assassination of leader Kim Jong Un's half-brother in Malaysia, using a banned nerve agent. Malaysian authorities blame North Korea for his death.

"If they don't pay a price for this behavior," Pinkston said, "and I think they should pay a high price, then they will continue with it."

The latest test comes against a backdrop that's both routine — annual March military drills staged by the U.S. and South Korea that Pyongyang sees as war prep — and unfamiliar. The new Trump administration's policy on North Korea is unclear, at best, and South Korea is in a leadership vacuum as an acting president runs day-to-day affairs in the country. The elected president, Park Geun-hye, was impeached by lawmakers on Dec. 9 and stripped of her powers. Whether she keeps her job is up to a court to decide, likely before the end of this month.