Accessibility links
WATCH: Tracking Lightning Strikes, From Space : The Two-Way NOAA's new weather satellite is carrying the first lightning detector ever parked in orbit over Earth. It has sent back its first images of real-time lightning storms in the Western Hemisphere. 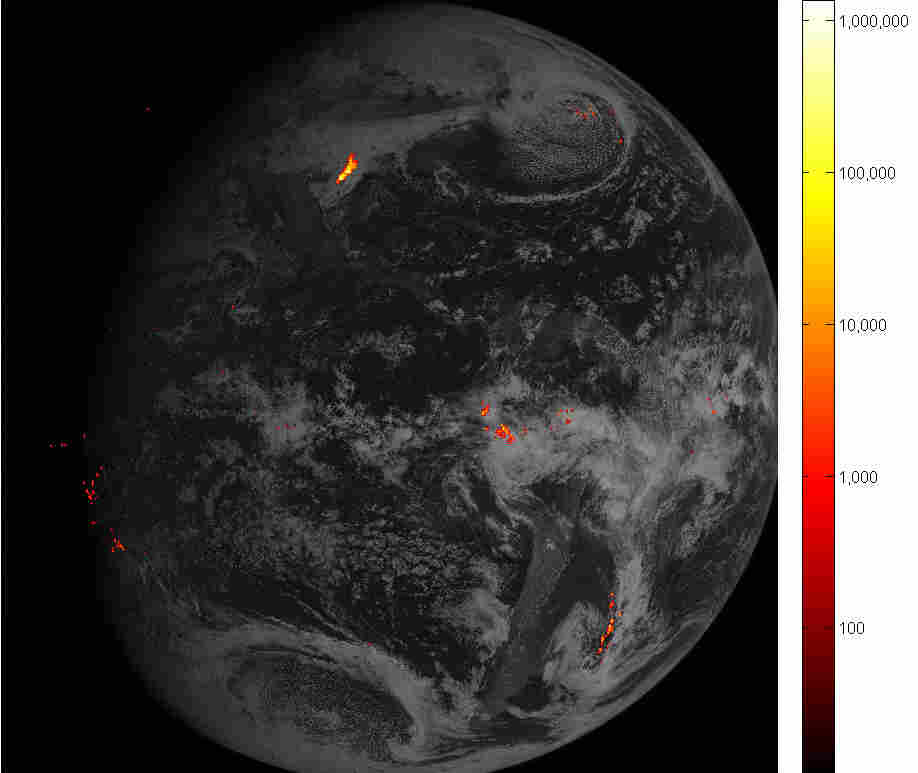 An image of Western Hemisphere lightning storms, captured Feb. 14 over the course of one hour. Brighter colors indicate more lightning energy was recorded (the key is in kilowatt-hours of total optical emissions from lightning.) The most powerful storm system is located over the Gulf Coast of Texas. MATLAB/National Oceanic and Atmospheric Administration hide caption 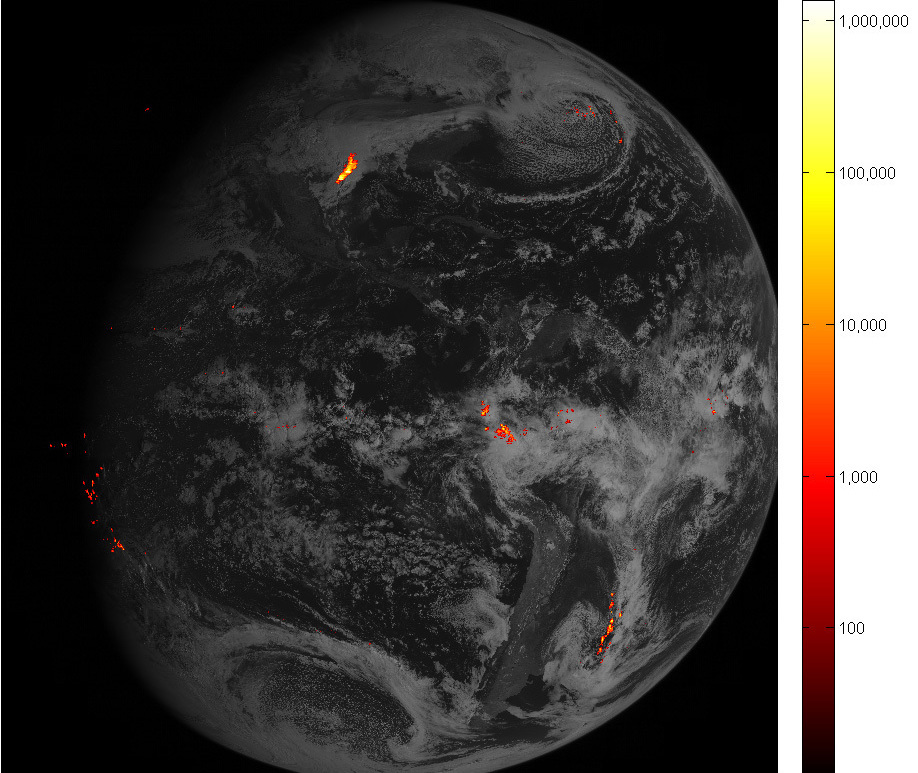 An image of Western Hemisphere lightning storms, captured Feb. 14 over the course of one hour. Brighter colors indicate more lightning energy was recorded (the key is in kilowatt-hours of total optical emissions from lightning.) The most powerful storm system is located over the Gulf Coast of Texas.

A new weather satellite parked 22,300 miles above Earth has sent back its first images of lightning storms on our planet, and they are, well, pretty flashy.

The National Oceanic and Atmospheric Administration, which runs the satellite, released the first image from a new instrument, a lightning detector. It shows lightning flashes over the course of an hour on Valentine's Day, from the Gulf of Mexico down to the southern coast of South America.

The agency also released the video below showing images of the lightning storms developing over southeast Texas on that day — part of the same system that created the bright blotch of lightning activity in the hemispheric image above. In the video, the green dotted lines designate the Texas and Louisiana coastlines.

The video animation strings together images from the weather satellite's Geostationary Lightning Mapper to simulate "what your eye might see from above the clouds," according to the technical caption.

In its announcement, NOAA called the lightning detector images "data never before available to forecasters," and expressed high hopes for what such information could do for disaster preparedness and response:

"During heavy rain, [lightning detector] data will show when thunderstorms are stalled or if they are gathering strength. When combined with radar and other satellite data, [lightning detector] data may help forecasters anticipate severe weather and issue flood and flash flood warnings sooner. In dry areas, especially in the western United States, information from the instrument will help forecasters, and ultimately firefighters, identify areas prone to wildfires sparked by lightning."

"As you can imagine, we are pretty excited here at NOAA Satellites," spokesperson Connie Barclay told NPR in an email. "Lightning strikes the U.S. on average of 25 million times each year, and kills on average 49 people in the U.S. each year."

Earlier this year, the same weather satellite, known as GOES-16, sent back its first high-definition images of the sun.

As we have reported, GOES-16 launched in November 2016 and is still in a testing phase:

"GOES-16 was launched from Cape Canaveral, Fla., in December and is a collaboration between NOAA and NASA. When it is fully up and running, the satellite will 'provide images of weather pattern and severe storms as frequently as every 30 seconds, which will contribute to more accurate and reliable weather forecasts and severe weather outlooks,' according to its mission overview page.

"GOES-16 is in geostationary orbit, meaning its location does not move relative to the ground below it. It is 22,300 miles above Earth. Its imaging device measures 16 different 'spectral bands,' including two that are visible to the human eye and 14 that we experience as heat."

If all the tests go according to plan, the satellite will be fully operational in November, and a second, similar satellite that's currently being tested in Colorado will begin operating about nine months later.

'Like High-Definition From The Heavens'; NOAA Releases New Images Of Earth

A previous version of this story said the GOES-16 weather satellite launched in December 2016. In fact, it launched in November of that year.