Accessibility links
This Moon Of Saturn May Be Tiny, But It Sure Looks Like A Mouthful : The Two-Way You may be inclined to see a ravioli, a walnut or an empanada, but it's tough to deny that Pan's distinctive ridge makes a tasty impression. The images were taken by the Cassini spacecraft Thursday. 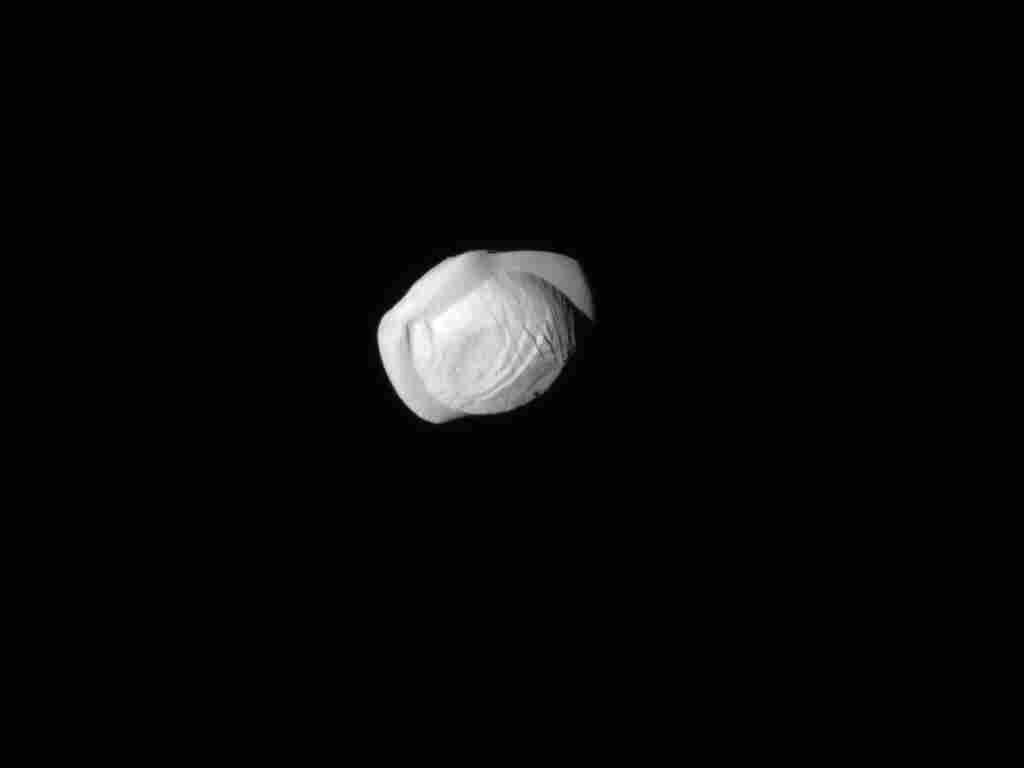 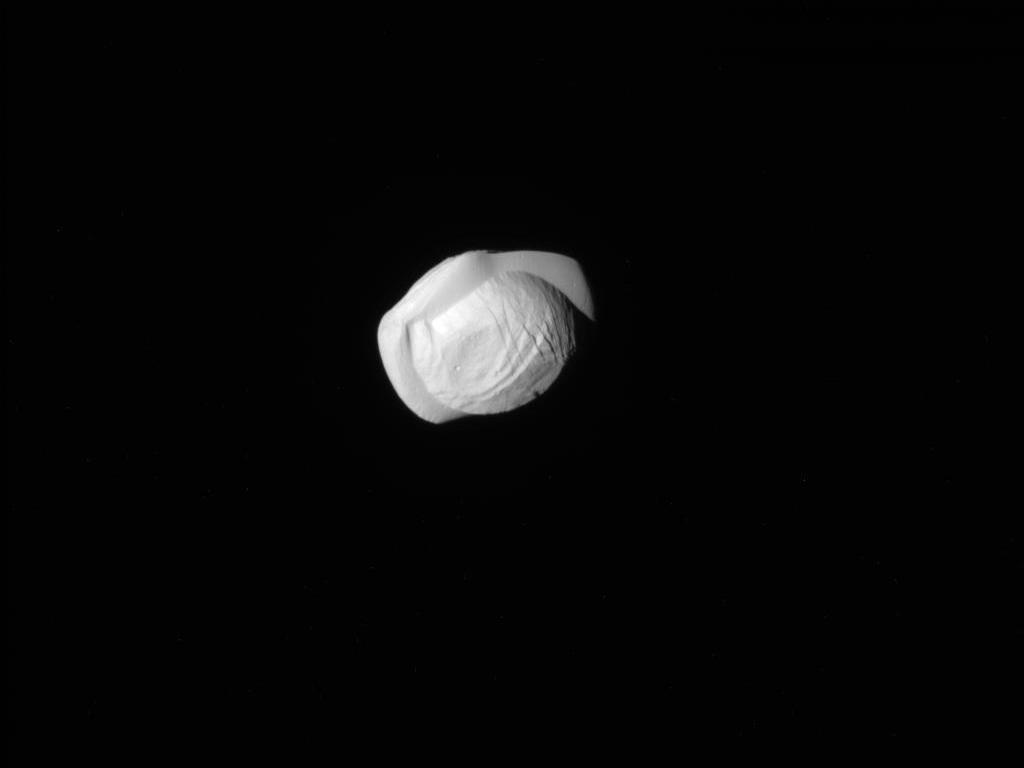 That's no ravioli! Pan, one of Saturn's moons, bears more than a passing resemblance to a certain stuffed pasta.

Oh sure, the Cassini spacecraft has been orbiting Saturn since 2004, capturing breathtaking images of the beringed gas giant and illuminating a once-obscure pocket of our solar system for the sake of scientific inquiry.

But — you're surely asking — what good is all that if the craft hasn't taken any quality photographs of space ravioli?

Well, on Thursday, Cassini finally sent back what armchair astronomers are saying is the world's definitive depiction of space ravioli — or, depending on whom you ask, a space walnut ... or a space empanada.

Or, if you insist on getting technical: The image sent back Thursday depicts Saturn's tiny moon Pan, a distinctively ridged satellite that's so close to the planet, it completes a full orbit roughly every 14 hours. The moon, which has a diameter of just about 20 miles, follows in the footsteps of its ancient Greek namesake by acting as a shepherd to the material that makes up Saturn's rings, clearing an empty space in their midst known as the Encke Gap.

Still, whatever its other qualities, Pan's curious shape is tough to ignore because it bears more than a passing resemblance to a sight you may find much closer to home — or rather, in your home on your dinner table.

As researchers posited in Science magazine in 2007, Pan and another of Saturn's moons earned their equatorial ridges from the accumulation of ring particles, picked up over time as the moons orbit.

The authors put it this way: "We propose that Pan and Atlas ridges are kilometers-thick 'ring-particle piles' formed after the satellites themselves and after the flattening of the rings but before the complete depletion of ring material from their surroundings."

It's safe to say the images released Thursday are some of the clearest we've ever seen of Pan.

"I saw this picture, and I thought, that's an artist's conception," Carolyn C. Porco, leader of Cassini's imaging team and visiting scholar at the University of California, Berkeley, tells the New York Times. "Then I realized it was real."

And it might very well be among the last images sent by Cassini, a robotic spacecraft spearheaded jointly by NASA, the European Space Agency and Italy's space agency.

After more than a decade circling Saturn, the craft has just a few months left before it commences what NASA calls the Grand Finale, a "daring set of orbits" that will end with Cassini plunging past Saturn to collect information on the planet's gravitational fields, atmosphere and ring mass.

Yet above and beyond the incalculable value it has offered scientists, Cassini's recent flyby has also offered journalists a humbler — though no less joyous — kind of gift: the chance to make a whole lot of pasta jokes.