Accessibility links
Tillerson Says 'All Of The Options Are On The Table' In Dealing With North Korea : The Two-Way One day after saying diplomatic efforts "have failed" to affect North Korea, Secretary of State Rex Tillerson says the U.S. would consider all military options if compelled to act. 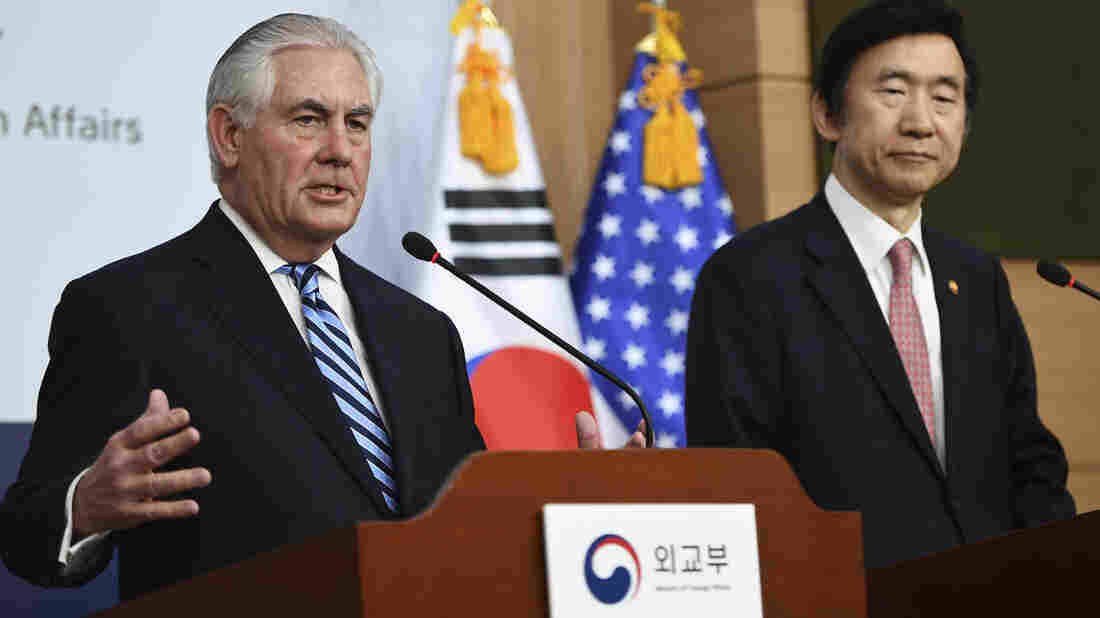 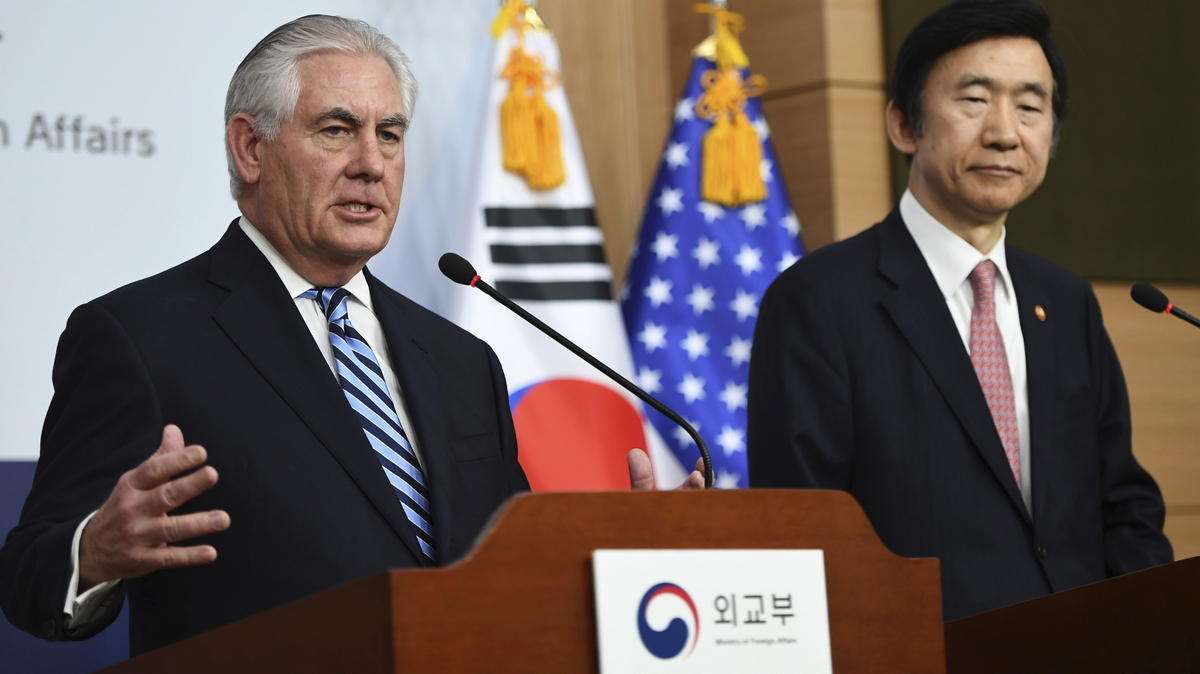 Secretary of State Rex Tillerson says the U.S. doesn't want to take military action against North Korea, but "all of the options are on the table" if a serious threat arises. Tillerson made his frank remarks in a visit to South Korea on Friday, a day after saying diplomatic efforts "have failed" to persuade North Korea to abandon its nuclear program.

Tillerson's Asia tour began in Japan and will end in China. The top American diplomat is traveling without a press contingent.

"The policy of strategic patience has ended," Tillerson said, according to The Korea Times, in an apparent reference to the Obama administration's approach. "We are exploring a new range of diplomatic, security, economic measures. All options are on the table."

Discussing potential military action, Tillerson said that while the U.S. would prefer to avoid an armed conflict, "If they elevate the threat of their weapons program to a level that we believe requires action, then that option's on the table."

"I think he's being very straight with China, and the regional allies in the Asia region — South Korea and Japan — that we're looking at negotiations all the way to preemption," Joseph DeTrani, former special envoy for six-party talks with North Korea, tells NPR's Audie Cornish. "If there's an imminent strike against the United States, we have to look at all options on the table."

North Korea is casting a long shadow over this trip, both for its potential nuclear threat and the recent flurry of missiles it tested, in a launch that sent weapons hundreds of miles toward Japan before landing in the Sea of Japan. In a news conference with Tillerson and Japanese Foreign Minister Fumio Kishida on Thursday, the Korean peninsula was mentioned more than 40 times.

On Friday, concerns about North Korea prompted a missile evacuation drill on Japan's coast, where more than 100 residents of a town heard sirens and were told to take cover in an exercise that's seen as unprecedented.

But it's not only reactive measure that are necessary, DeTrani tells NPR.

"We've got to be as creative, we've got to be as forward-leaning as possible to give North Korea those off-ramps so they realize there are opportunities available to them that will not be available if they continue on the path of building nuclear and missile capabilities," he says.

Tillerson will head to China this weekend, as NPR's Anthony Kuhn reports from Beijing:

"The State Department says that an important part of Tillerson's agenda here will be to push Beijing to push North Korea to abandon its nuclear and missile programs. He is also expected to plan for a visit by President Xi Jinping to meet with President Trump at his private club in Mar-a-Lago, Fla., next month, although that hasn't been formally announced yet."

Anthony adds, "For its part, China wants ties with the U.S. to remain stable, so as not to distract from a leadership reshuffle this fall."