Accessibility links
Police Identify Suspect In London Attack Near Parliament; Death Toll Rises To 4 : The Two-Way Khalid Masood, 52, was born in Kent. The suspect was once investigated "in relation to concerns about violent extremism," British Prime Minister Theresa May said Thursday. 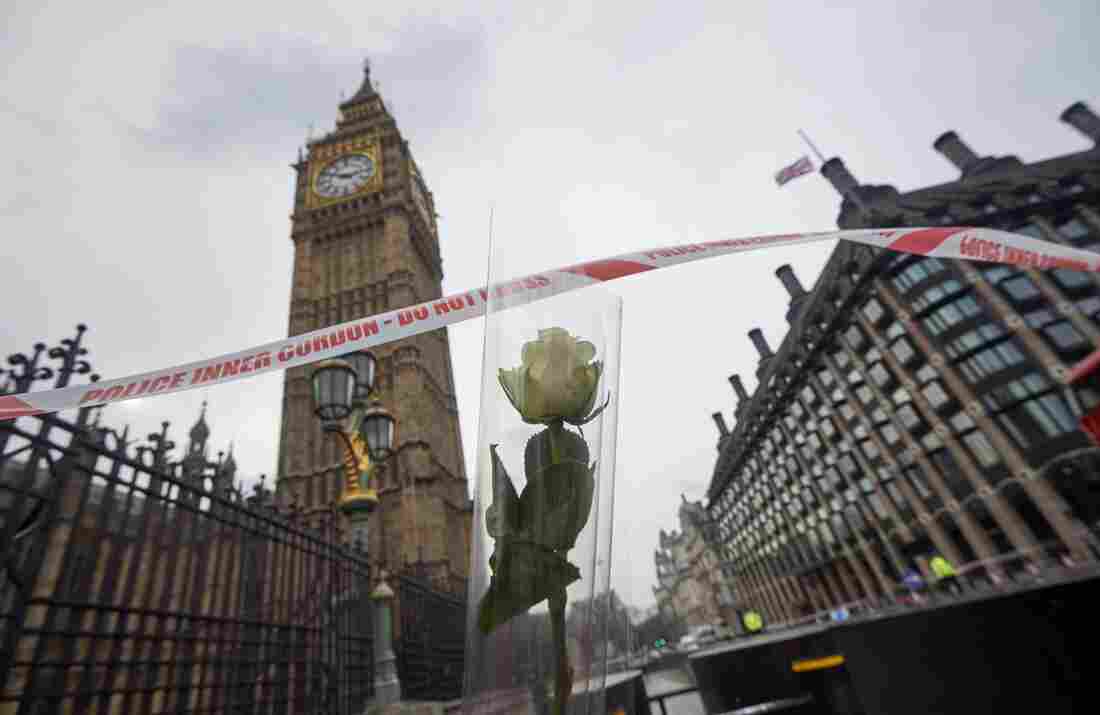 A flower left in tribute to the victims of Wednesday's attack is seen next to the Palace of Westminster that houses the Houses of Parliament in central London. Niklas Halle'n/AFP/Getty Images hide caption 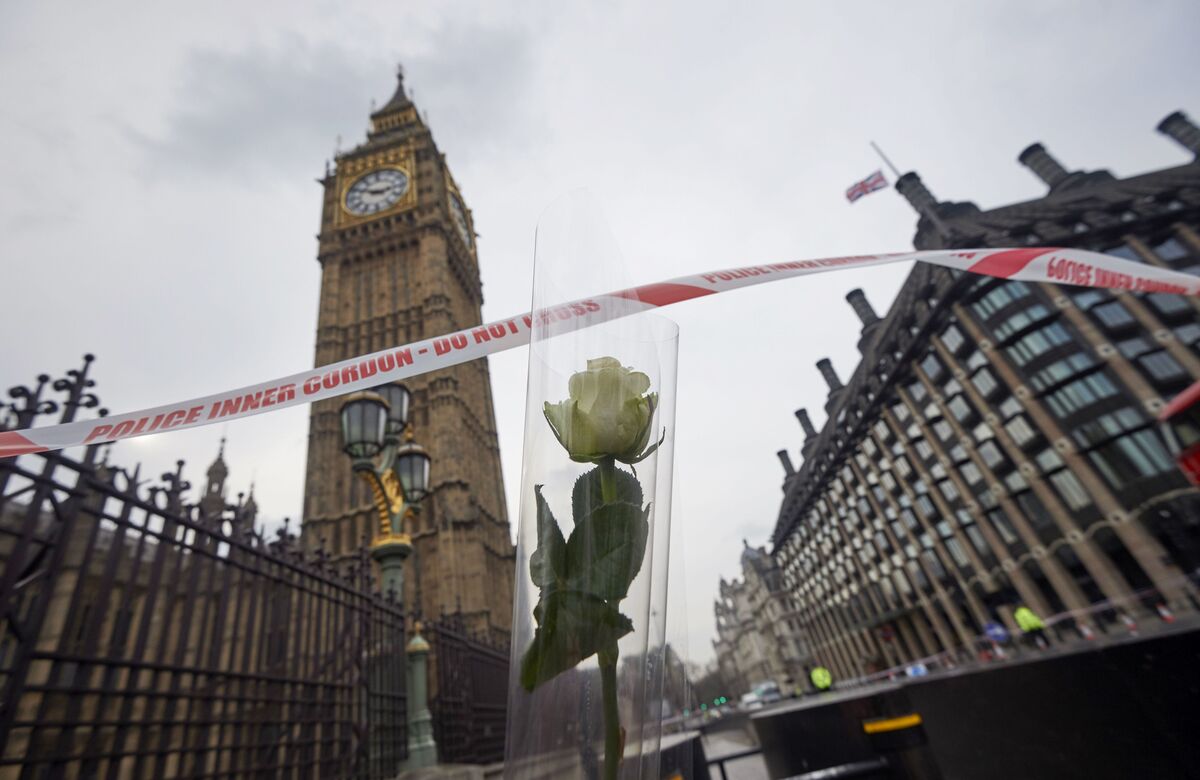 A flower left in tribute to the victims of Wednesday's attack is seen next to the Palace of Westminster that houses the Houses of Parliament in central London.

The man who is believed to have carried out a deadly attack near the U.K. Parliament has been identified by Britain's Metropolitan Police as Khalid Masood, 52.

Police believe the man acted alone. He was shot and killed after carrying out an attack that killed a police officer and three civilians and wounded several others around 2:40 p.m. local time Wednesday. (Two of the civilian victims died on Wednesday; the third was hospitalized after the attack and died Thursday.)

Masood was born in Kent and is believed to have been living in the West Midlands. Police say he "was not the subject of any current investigations and there was no prior intelligence about his intent to mount a terrorist attack."

"However, he was known to police and has a range of previous convictions for assaults, including [grievous bodily harm ], possession of offensive weapons and public order offences," Scotland Yard said Thursday.

Masood, who used "a number of aliases," according to police, has a criminal record that dates to at least November 1983, when he was convicted of criminal damage. His last conviction was in December 2003 for possession of a knife, police say.

"He has not been convicted for any terrorism offences," the agency says.

Those killed include an American, Kurt Cochran of Utah, who was visiting London and was hit by the attacker's vehicle on Westminster Bridge. According to The Salt Lake Tribune, Cochran, 54, was on the final day of a wedding-anniversary trip with his wife, who was injured in the attack.

"A great American, Kurt Cochran, was killed in the London terror attack," President Trump said in a tweet. "My prayers and condolences are with his family and friends."

Two other civilian victims have died, the Metropolitan Police say: a woman in her 40s, and a man in his 70s who was taken off life support on Thursday. 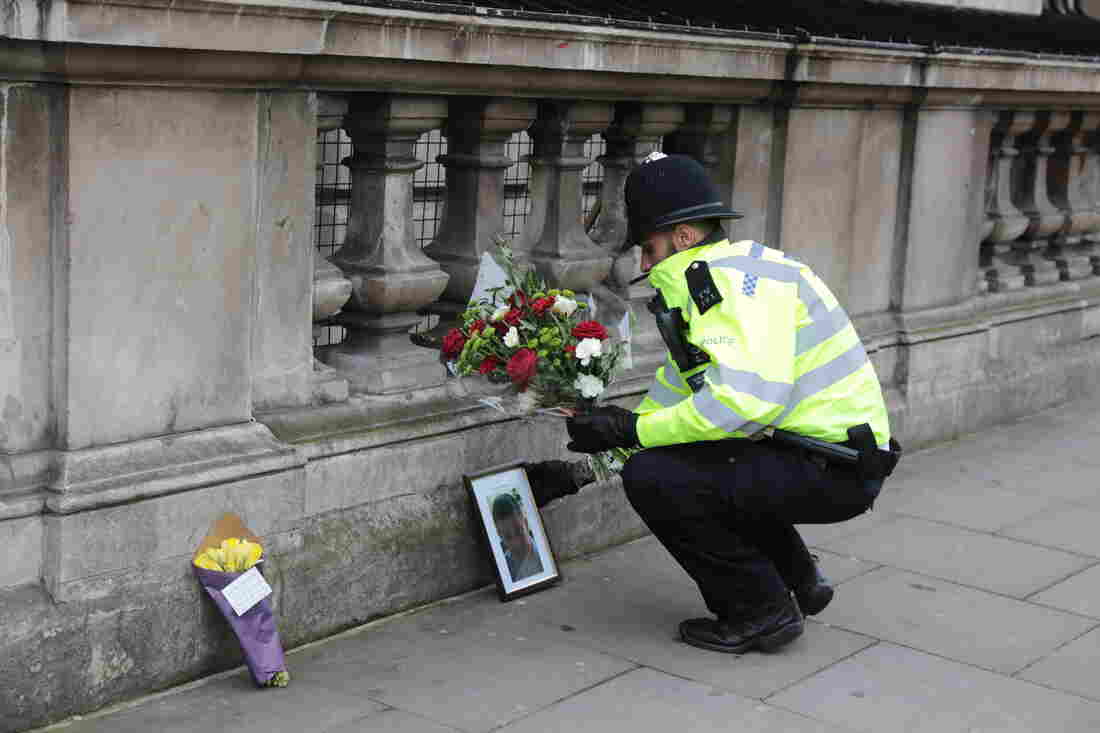 A police officer places flowers from a member of the public next to a photo of Keith Palmer, the police officer who was stabbed Wednesday as he guarded the Palace of Westminster. Prime Minister Theresa May said of Palmer, "He was every inch a hero." Jack Taylor/Getty Images hide caption 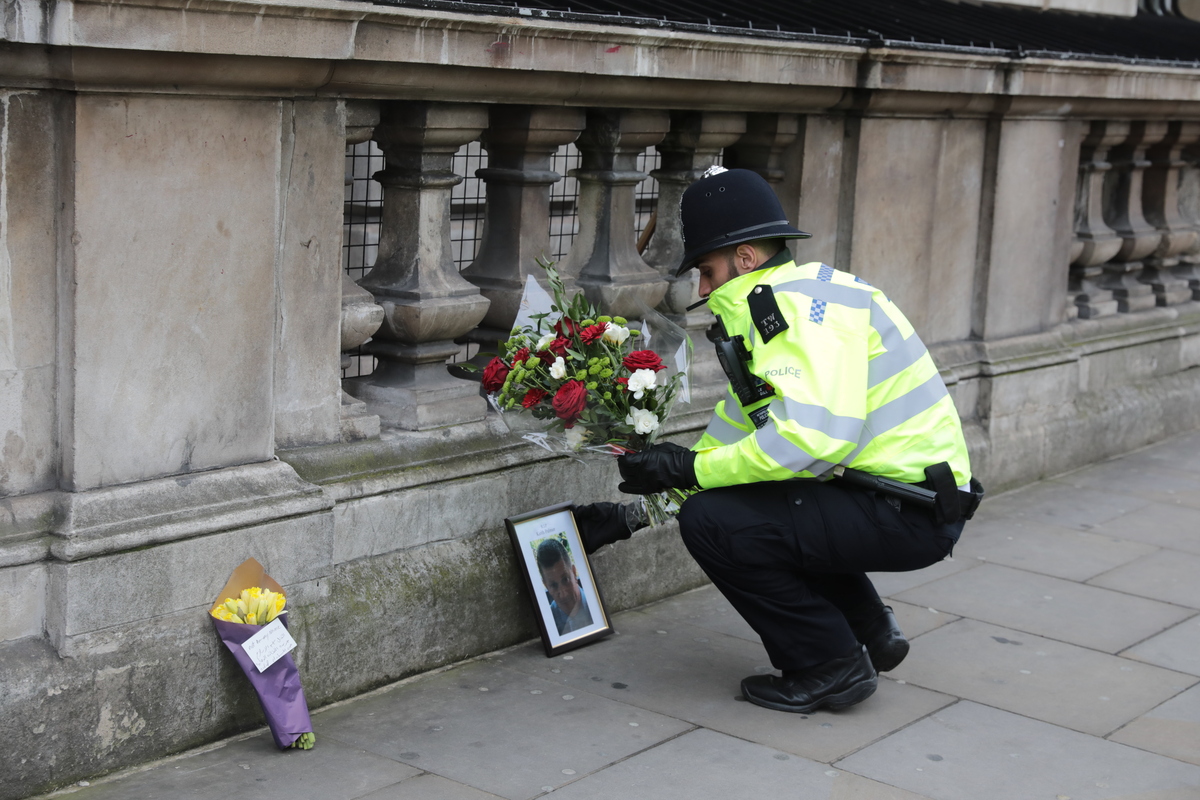 A police officer places flowers from a member of the public next to a photo of Keith Palmer, the police officer who was stabbed Wednesday as he guarded the Palace of Westminster. Prime Minister Theresa May said of Palmer, "He was every inch a hero."

In a visit to the House of Commons Thursday morning, Prime Minister Theresa May said the suspect in the case was British-born and had previously been under the eye of security agencies.

"Some years ago, he was once investigated by MI5 in relation to concerns about violent extremism. He was a peripheral figure; the case was historic; he was not part of the current intelligence picture," May said of the attacker. She added that investigations are continuing.

"Our working assumption is that the attacker was inspired by Islamist ideology," the prime minister said.

ISIS has claimed responsibility for the attack, through a media outlet with ties to the extremist group. In a brief statement, it called the attacker an ISIS soldier — but the British government says a direct link with ISIS has not been confirmed.

Calling it "an attack on free people everywhere," May said, "We are not afraid, and our resolve will never waver in the face of terrorism."

In a counterterrorism operation launched after the attack, Britain's Metropolitan Police made eight arrests and searched six addresses in Birmingham and London.

In London Thursday, extra officers — both armed and unarmed — are out on the streets, the Metropolitan Police says. The department observed a moment of silence this morning, and a public vigil is scheduled for 6 p.m. local time Thursday in Trafalgar Square.

May also shared more details about the attack and those it harmed, saying it injured around 40 people. Of three police officers who were wounded, two remain hospitalized.

The wounded are from around the world, May said. In addition to 12 Britons, there are four South Koreans, three French children, two Romanians and two Greeks, along with nationals of the U.S., Germany, Poland, Ireland, China, Italy and other nations.

Speaking of slain police officer Keith Palmer, 48, a husband and father who had previously been in the military, May said, "He was every inch a hero, and his actions will never be forgotten."

On Thursday, Queen Elizabeth said via a statement:

"My thoughts, prayers, and deepest sympathy are with all those who have been affected by yesterday's awful violence.

"I know I speak for everyone in expressing my enduring thanks and admiration for the members of the Metropolitan Police Service and all who work so selflessly to help and protect others."

As we reported Wednesday:

"Authorities say a small SUV barreled into pedestrians along the sidewalk of Westminster Bridge, causing multiple 'catastrophic injuries' to pedestrians. ... After striking the pedestrians on the bridge, the SUV then crashed into the fence that surrounds Parliament. A man armed with a knife emerged and stabbed a police officer before being shot to death by police."